Does changing the ISO of a modern digital camera really change the gain of an electronic amplifier?

The question Why would using higher ISO and faster shutter speed yield more noise than using lower ISO and slower shutter speed? currently has five answers, and four of them contain the word amplify or amplifier several times.

I had always thought that the electronics between the CCD array and the ADC is fairly well fixed, and that ISO changes were actually implemented digitally, post-analog to digital conversion, but I have no basis for this thinking.

Is there really a variable gain analog amplifier before the ADC or ADCs for higher quality cameras? This answer even suggests there are millions of amplifiers.

I'd really like to be able to see a block diagram from some representative camera or sensor showing the variable-gain amplifier location before the ADC.

Here comes the definition of Circuitry, from whatdigitalcamera.com

CCD and CMOS sensors differ in terms of their construction. CCDs collect the charge at each photosite, and transfer it from the sensor through a light-shielded vertical array of pixels before it is converted to a signal and amplified. CMOS sensors convert charge to voltage and amplify the signal at each pixel location, and so output voltage rather than charge. CMOS sensors may also typically incorporate extra transistors for other functionality, such as noise reduction.

So the amplification process depends on the sensor, CCD or CMOS, but basically, ISO physically amplifies an analogic value.

For CCD, 1 amplifier helps many pixel, but for CMOS, 1 pixel = 1 amplifier. So yes, a 24 Mp CMOS sensor yields a whopping 24 million amplifiers!

For CMOS, take a look at this schematics, from micro.magnet.fsu.edu : 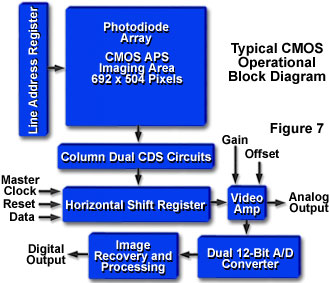 You can see that (one of) the amplification step is done by the bloc called "Video Amp", which has a gain parameter. Generally, this gain is controlled by a variable voltage or a variable resistance. The gain is set by physically change thoses parameters.

It may be possible that the gain in the sensor is fixed, and that the analogic variable part occurs only after the sensor, has suggested by the CMOS schematics.

As for CCD, take a look at the VSP2230 description. It is a CCD signal processor for digital camera from Texas Instrument, and features this functional diagram: 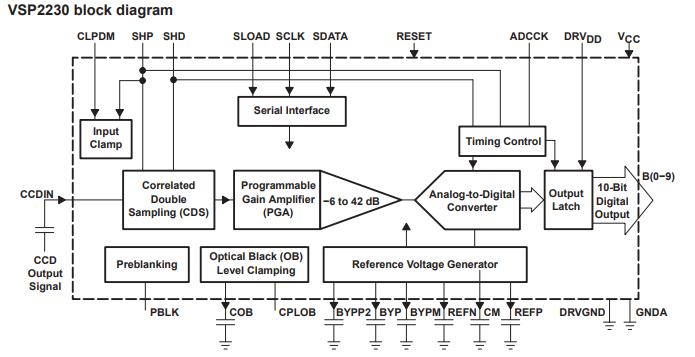 You can see that it provides a *Programmable Gain amplifier" before the analog to digital conversion.

If you look at the datasheet, page 2, you can see that the gain is programmed in a digital register (given by the Gain Code) via a serial interface. You can choose from -6db to +40db with a 10 bits value (1024 possibilities).

Now, if you want to go technical, take a look at http://ece.utdallas.edu/~torlak/courses/ee3311/lectures/ch07.pdf, it's a lecture from the University of Dallas about CMOS Amplifiers.

And if you really like your physics and math, try to get your hands on an edition of the Handbook of Digital Imaging

You can also take a look at How is ISO implemented in digital cameras?, but some links are missing.

I would like to add that analogic amplification happens at least in two steps: in the sensor and outside of the sensor. The gains from those amplifications might not always be fixed.

As a side note, generally, a DSLR sensor has a limited capacity to decently amplify an analogic signal. For huge ISO (>3200 for example), generally specified as an extended ISO range, it will use a digital gain.

Yes. The sensor is just buckets collecting the photons that come in, and it cannot adjust to be a greater sensitivity. The amplifiers can.

Not the answer you're looking for? Browse other questions tagged exposure iso iso-noise or ask your own question.

74
How is ISO implemented in digital cameras?
10
Why would using higher ISO and faster shutter speed yield more noise than using lower ISO and slower shutter speed?
6
Why does a non-linear relationship exist between noise level (of dark frame) and ISO setting

74
How is ISO implemented in digital cameras?
129
What is "ISO" on a digital camera?
46
Should higher ISOs really be preferred (all other things being equal)?
9
Digital ISO vs Post-Exposure Correction
2
How does "Unity Gain ISO" differ from Native ISO?
0
Will digital exposure above unity gain result in raw file with full bit depth?
6
Why does a non-linear relationship exist between noise level (of dark frame) and ISO setting
5
What is causing these stripes in my images?
2
Changing the camera ISO , Aperture, Shutter Speed with Android
0
Is ISO better analogized as how big your bucket is, or putting rocks into the bucket?