How to get lighting like this in a photo?

I absolutely love the dark, natural colors. Does anyone know what lighting works best, and how to get pictures to look like this? 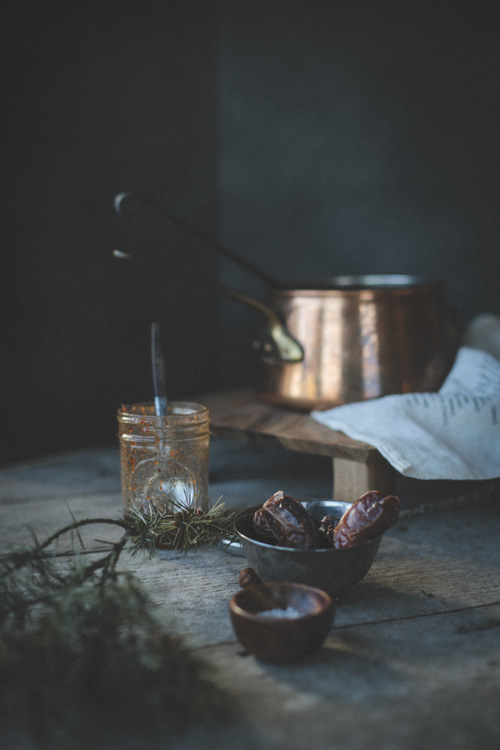 As previously mentioned, the exposure and postproduction are key in creating this look, but you have to start with lighting that contributes to the end goal.

Since many different combinations of light sources could help achieve this look, I'll point out some of the lighting techniques present in this image that you can try to emulate using whatever you have.

The main light is relatively small and hard (not diffuse), casting somewhat well-defined shadows of the two bowls in the foreground. It's coming from a high position behind the subject and out of frame to camera left.

Hard light from behind reveals texture and shine, which is why it's often seen in food photography. Light from behind can also imply a sense of space beyond the frame, lending the image an environmental quality that further immerses the viewer in the setting.

There is also fill lighting originating behind the camera, illuminating the shadows to establish the desired ratio of highlight to shadow. The reflections of the fill light source in the pot reveal its origin and relative size. It looks large, like a window. A large source produces soft-edged shadows and gradual transitions from highlight to shadow, as you can see on the towel. The fill exposure is kept low to avoid competing with the main, but there's enough to reveal detail in the shadows.

Mixing both hard and soft light also contributes to the image's natural look and feel.

The brightness value of the shadows compared to that of the highlights needs to be managed. Shadows that are too close to the highlight value de-emphasize contours that give objects shape, and make the lighting look flat (which is good for newspaper reproduction, for example, which introduces a lot of contrast in the printing process, so there is sometimes a reason to do it). Shadows that are too dark create too much contrast and hide shadow detail. The lighting ratio along with exposure have a huge effect on the mood that a photograph conveys. Be aware of it and experiment.

Chiaroscuro is a lighting technique derived from paintings, that reveals form through the interplay of light and shadow. The dark surroundings in the background and at the edges of the frame contribute to a vignette effect that brings attention to the brighter table and the objects atop it. Within the central region, an even brighter spot next to the peppers highlights the point of focus, drawing the eye to the smaller chiaroscuro effect within the larger one.

The objects on the table are moderately to highly reflective, creating pops of highlights throughout the center of the frame that contrast with the darker tones. If everything was made of plastic, the image would have a very different feel.

The dark exposure creates a somber mood that also helps bring attention to the highlighted areas, and leaves room tonally for your postproduction antics. Managing your ratio helps you achieve the low key look while preserving detail in the shadows.

"Lighting like this" is the result of several decisions that each complement the overall concept. These days a lot of the "magic" is done in postproduction, but starting with solid lighting that's as close to the end result as possible will save you a ton of work and give your images a richer, more organic feel.

9
How to get this colorful look in a landscape photo?
5
How should I light 2d artwork in a makeshift studio? What lighting products do I need?
26
How do I get good colors when taking pictures in the city at night?
2
How might Mario Testino have lit this Kate Moss photo?
4
How to cancel purple stage lighting on subjects?
4
Simple instructions for how to get this particular lighting for a headshot?
3
How did they do this beauty setup? What lights and focal length? Help me recreate this
2
Outdoor lighting: is this natural light or a graphic effect?
1
How can I setup lighting to achieve this look?