How do I achieve the technique which creates the illusion of busy locations being empty?

I remember seeing a series of photos where popular tourist locations are shown to be completely empty. I'm assuming it was done by taking a series of photos and then combining them in Photoshop. But what is the name of that technique so that I can research it further? Bonus points if you actually post the required steps within your answer.

One straightforward way to achieve this effect is to take multiple shots of the same scene and combine them using median blending. This technique is commonly used for noise reduction, and does it very effectively — so effectively, in fact, that it can even hide "noise" such as random people walking through the scene.

What median blending effectively does is combine multiple shots of the same scene, replacing the color of each pixel (or, rather, each RGB color channel of each pixel) with the median of the colors of that pixel in each shot — that is, a color value chosen to be lighter than in 50% of the shots and darker than in the other 50%.

Compared to simple averaging (either by digital stacking, or simply by taking a longer exposure), median blending is a lot more effective at rejecting "outliers", i.e. pixel values that happen to lie far from the "consensus" value, whether due to noise or due to an obstacle in the frame. In practical terms, what this means is that properly done median blending doesn't suffer from the faint blurry "ghosts" that moving people or other obstacles tend to produce in averaged images or in long exposures.

The main drawback of median blending is that, to guarantee successful obstacle removal, each pixel in the image must be unobscured in over 50% of the shots. Otherwise, it's possible that the "true" unobscured color of some pixels will actually end up getting rejected as an outlier, leading to more or less random fragments of the foreground obstacles showing up in the results. As such, median blending is poorly suited for very crowded scenes where the requirement of 50% unobscured coverage cannot be reliably met. (In such cases manual stitching, as suggested by Jahaziel, may be more effective at the cost of extra labor.)

Also, median blending can give poor results if the actual scene you wish to capture contains some moving elements such as waving flags or clouds moving across the sky. Whereas a long exposure simply causes moving clouds to blur into streaks, median blending will try to color each pixel either "cloud gray" or "sky blue", depending on which color happens to appear in a majority of the shots, potentially producing weird and ugly results. Again, it may be possible to fix this by manual masking (e.g. by using a single shot for the sky and only applying median blending to the non-sky parts of the picture).

Also, as with any image stacking technique, you obviously need a static scene and the ability to take multiple shots of it from the exact same viewpoint. To some extent you can compensate for minor camera shake with digital image alignment, but a good tripod is definitely recommended.

(Unfortunately, I don't personally have any good pictures available to illustrate this technique with. However, the PetaPixel post I linked to in my first paragraph above does have some, as does this tutorial that I found via Google.)

I actually just shot a photo just like this. This was shot around mid afternoon in downtown Portland and I assure you, there actually was traffic moving along the bridge.

The set up included stacking an 18 stop ND filter on top of a polarizer and exposing the frame for 11 minutes, ish (707 seconds to be exact). As long as the people or cars keep moving, at that slow an exposure, they won't be there at all, not even as partially exposed ghosts. 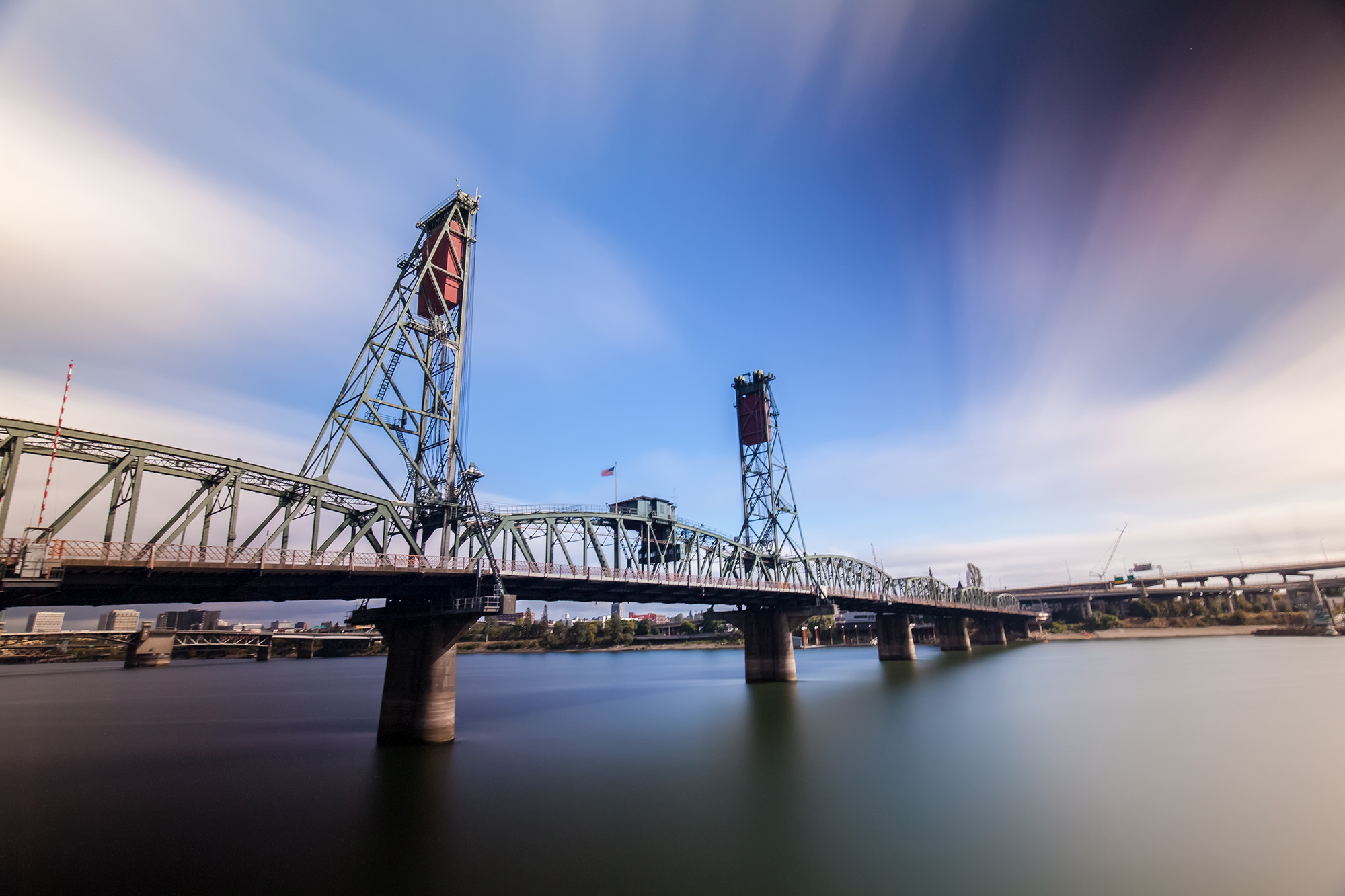 Using this technique, there will be a very high amount of color noise, especially noticeable in the shadows. I highly recommend taking a dark frame.

One option (besides the photoshop one mentioned in comment by @Max) is using heavy ND filtration.

This picture is a busy landmark in Prague, shot with a +10 ND filter. The total exposure time was two minutes.

You can just about see people where they stopped for a while (these are tourists, so they most likely consulted their little guide books or took a selfie or whatever).

I suppose that an exposure of five minutes would have removed even these ghosts - but it was not my aim, as I kind of liked the idea of ghosts, not too distracting and not quite there, but visible with a little effort. 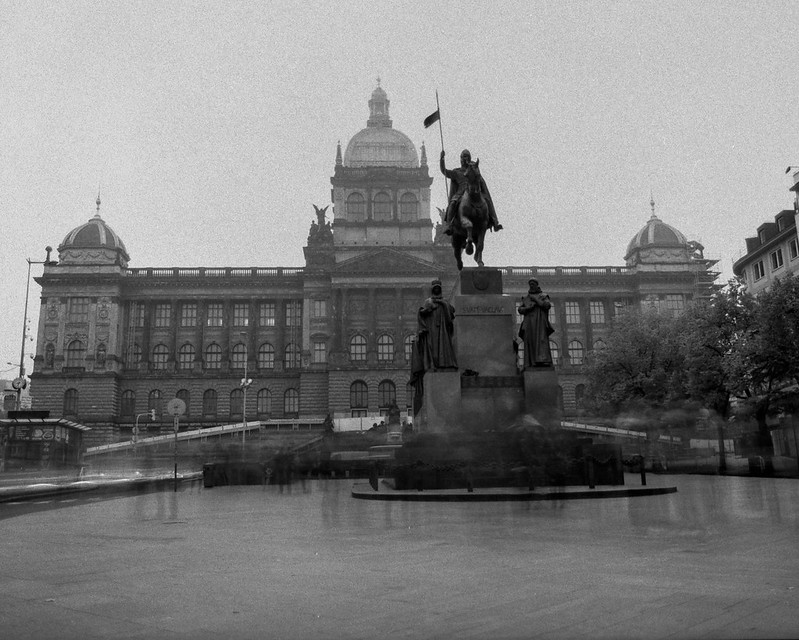 I guess the correct technique is long exposure + ND filter. The ND filter is used to allow for longer exposure time. Wherever long exposure is used, a tripod of some suitable substitute is a must.

However, I want to contribute an alternative strategy: Compositing, for those cases where that technique is not feasible.

I've taken shots in touristic locations where a tripod is not allowed and the movement of people is not constant, that is, they stand on one spot for a while, stare, take selfies, then move to another spot, and repeat. The time they remain in the same area can easily be as long as the exposure I'd use (given my current gear).

So what I did is take several shots, using manual settings while standing in the same spot and trying as best as possible to keep the camera at the same spot in space, then used layer alignment software (Photoshop has an auto-align feature), then use layer masks to "hide the people" or "reveal the landscape behind the people". (Manual mode is used for keeping exposure as uniform as possible).

For this to work out, the shots should not be taken too far apart in time, this is for the lighting to remain the same (unless you want or need the opposite) and also, you need to keep track of which parts of the landscape you still need to shot unobstructed, so you get all the shots you need (enough layers) to be able to completely remove all people from the scene.

Note: The long exposure technique, specially not-so-long exposures is better suited for scenes where people/object movement is rather constant, because people or objects standing still for long enough will show in the exposure "like ghosts".

One obvious way to do this is coming to the scene very early in the morning.

If you come at 5:00 in the morning in Summer, chances are, it's already sunny but not a single person in sight. So you won't need any technique!

The first photo of a human was taken using a long exposure. The street was bustling but only the man getting his shoes shined remained still throughout the exposure to appear on film. This was an early photo so no ND filter needed! 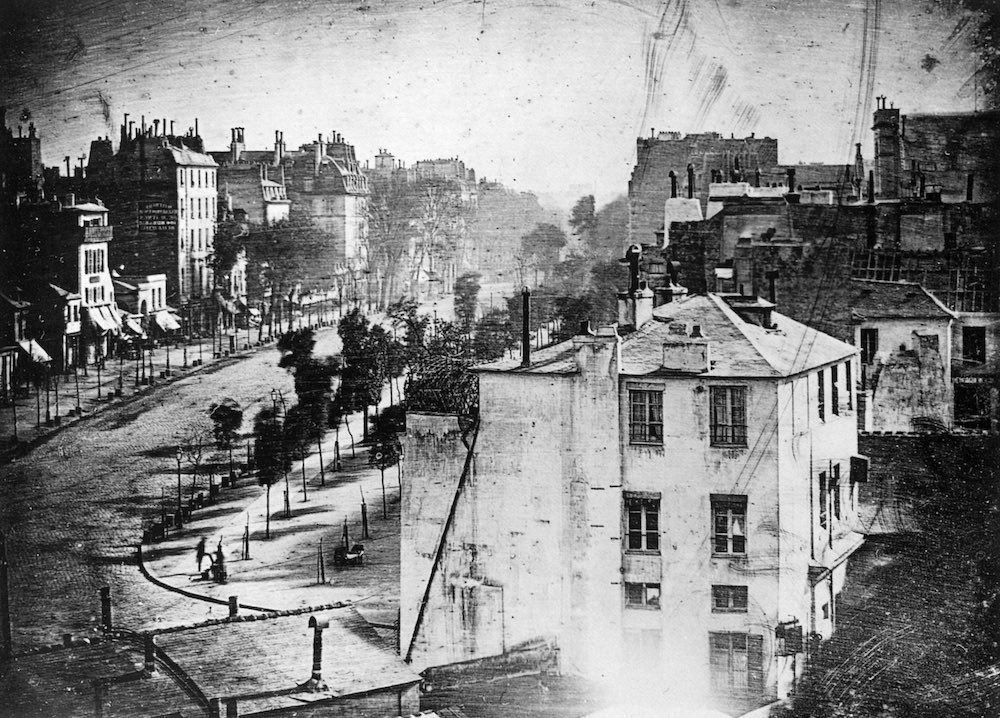 Actually you don't need long exposure nor too many shots. The exact method you are looking for is called background subtractions (~foreground detection).
Algorithm detects what is moving in picture so you can remove it (or vice versa). In college we did "Gaussian mixture model for background subtraction" (pdf) which removes moving objects from short video (or even single photo but there will be holes in it and it is not precise).
Example Video -> Picture (first link I found)
Or example of 10 background pictures and 10 with slightly moving object Here -> Graphcut Background Subtraction (In this case median could fail)

It is better than median method, because it will count only "non-moving objects" = If there are some shots and background under/behind some objects are visible only for 30% of them -> median would likely fail, but this not.
More technical info

The principle behind an empty city or street image: the camera exposure accumulates light energy. Ordinarily we expose for a fraction of a second. However we can break this rule of thumb and elongate the exposure so its duration is several minutes or even hours long. This can be accomplished using a very dark neutral density filter and/or a tiny lens aperture or a combination of both.

Another technique is to set the shutter speed to the fastest available setting and couple this with a tiny aperture setting. Then we expose and pause and expose again, over and over. Each exposure accumulates a fraction of the needed exposure. The exposure is repeated numerous times with a delay between each actuation. This method eventually accumulates the needed light energy.

The “ghost” effect is due to the fact that stationary object record but transiting object do not linger long enough to be recorded.

Not the answer you're looking for? Browse other questions tagged terminology shooting-technique or ask your own question.

7
Why can't I shoot with a fast shutter speed with my continuous light at max power?
14
What is a good example for artistic ND filter applications?
2
How can I do automatic background subtraction with a reference image in Photoshop?

6
How can I achieve this effect, where the flower is sharp and everything else is blurry?