Today, I'm hopeful I'll be allowed to take my camera inside a prestigious car museum. It will be a whistle-stop tour and I won't have time to set up lighting, change lenses, prepare speedlight, etc.

Plan of action so far is to work Aperture Preferred, Matrix metering, continuous servo AF — but I'm not sure whether to go with Auto-area or 3D. Some of these shots I'm guessing I'll barely have time to stop walking, let alone get comfortable .

I'm considering setting up bracketing to spread the chances of one being better than the others, or even to HDR afterwards; but I'm tending towards thinking I'd do better if I manually "bracketed" aperture instead to try grabbing a selection of high detail shots vs shallow & "arty".
On balance, I'd rather end up with one good shallow DoF shot than a card-full of uninteresting shots sharp across the room.

That would leave me only having to watch my ISO values are keeping exposure times within manageable tolerance.

Does this sound like a sensible plan, overall, or should I be thinking more in terms of "F8 & be there"?

Don't try anything you've never done before. That is to say, don't try a strategy or technique (or, heaven forbid, a piece of gear) you haven't already used multiple times in similar circumstances. When the pressure is on is not the time to try new ways of doing things. It is the time to use the techniques and practices you have already developed in your pursuit of mastering the craft.

There's an old saying that luck is what happens when preparation meets opportunity. The tour is your opportunity. Your best chance of getting some "lucky" shots is to shoot the way you've best prepared to shoot it.

If none of your developed skill set and style are applicable to the situation, then take the opportunity now to put yourself in a similar situation and run through it a couple of times.

Since we're using old cliches often used in sports here, we'll close with this one: "Your most significant improvement is usually between the first and second time you do something."

All of the things you are restricted from doing are the things that increase the chances of getting a meaningfully good photograph to "reasonable" from "one in a million luck". I certainly mean lack of lighting setup, but beyond that, restricted positioning and rushed time — and beyond that, inability to really plan ahead in a meaningful way.

In situations like this, the best plan of action is to just enjoy the experience. Take some snapshots if you must, but mostly, enjoy the direct experience. Then, if you want photographs to match, visit the gift shop and buy a postcard or photo book from someone who was afforded the opportunity to really photograph the museum.

The existing answers here gave me some insight - some after the fact, as I was at the event whilst some of them were being posted.

I had to give it a shot, as a one-off opportunity; so had to accept that I was extremely unlikely to get one picture worth putting on the wall.

I didn't realise until I was there how little room I'd have to get far enough back to encompass an entire car, & the number of people there meant very brief slices of time to actually get any shot at all.
The lighting was also a surprise - I'd expected a light room with maybe highlight spots; instead the place was really dark with the cars picked out in bright, hard lights, often from underneath. That left any thought of f8 right out, I was struggling to get short enough exposure at f1.4, so I knew I wasn't going to get the DoF I'd have preferred & changed tactic to try live with that.

Most of the cars were also close to a wall, so my preconceptions of getting sharp car against soft background were gone too.

So, in conclusion - thank you all for the advice.
I tried, I didn't quite fail. Here are a couple of better shots - which, if you're a fan, will perhaps explain why I felt it compulsory to take the camera. 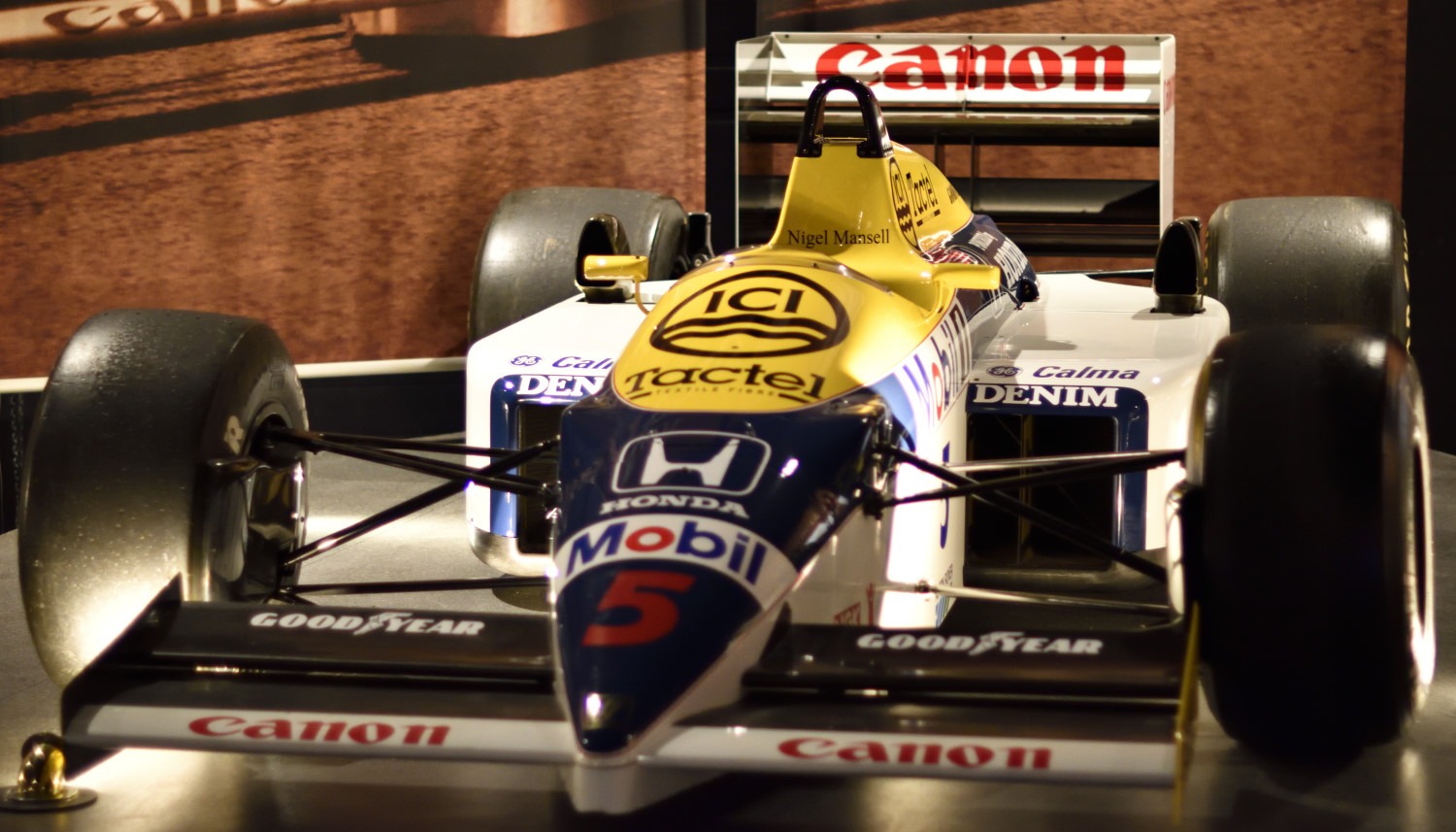 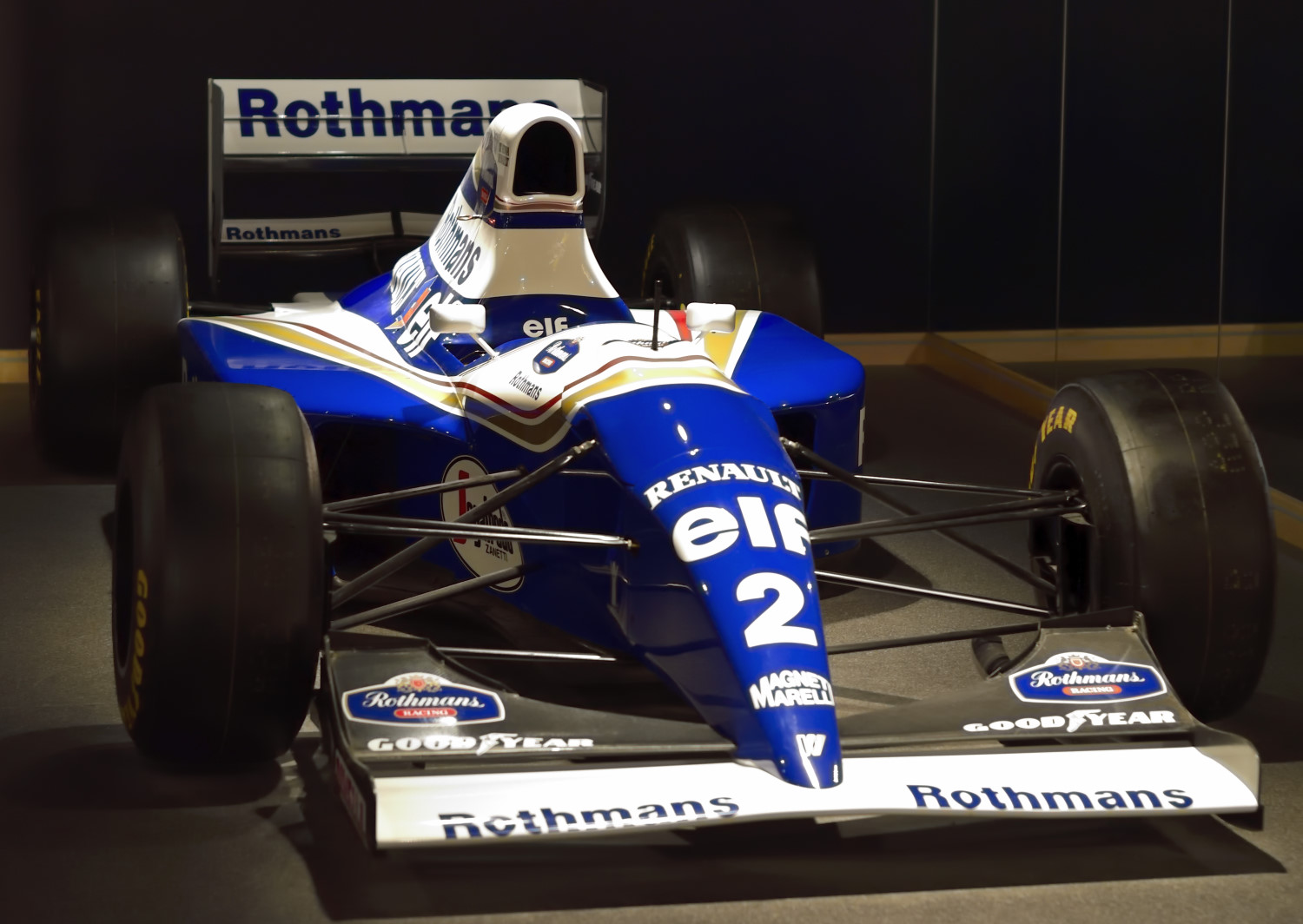 A few things that come to my mind:

But overall mattdm seems to be right: under the conditions described you will not be able to match the shots of a pro who had the museum for himself, was allowed to set up lights and work at his own speed. The best is to have fun and enjoy the visit.

As a general rule, the more adverse the lighting conditions, the more I move toward manual control rather than hoping for camera magic. Museum lighting is likely to be at least Ev_100 = 8 and perhaps as high as Ev_100 = 11. This means adjusting the camera 5 to 8 stops below Sunny 16 will provide a normal exposure.

If it were me, I would shoot with a predetermined aperture to allow adequate depth of field and as slow a fixed shutter speed as lens focal length and the availability of image stabilization allow.

In practice I would probably set the ISO to Auto from 100-3200, use faster shutter speeds, spot metering, and exposure compensation based on the target of my spot metering and how the histogram looks when I chimp. I would probably prefer a 24-105 over a fast fifty because the wider array of possible compositions it provides and a preference for excluding unwanted elements via zooming over the bokeh/depth of field tradeoff.

Not the answer you're looking for? Browse other questions tagged camera-settings cars or ask your own question.

1
What is the best lens car photography on a nikon d5200?

22
What do you do with your camera clock time in relation to time zones?
3
How to set exact time on a Pentax K-5?
2
What are proper settings to capture sun rise time-lapse?
5
Taking sports and action shots with regular lenses
11
Why don't most cameras store filenames based on date and time?
3
How do I turn off the BULB and LIVE TIME mode of my OLYMPUS OM-D EM-5?
1
Time lapse of solar eclipse?
1
Studio Time Lapse Photography
2
As an inexperienced user, how can I best take action photographs with a DSLR and consumer superzoom?