How is spectral sensitivity of a camera calculated?

I understand that to recreate the spectral response of a camera's sensor, you need to use a monochromator/spectrometer to get calibrated images. But I'm not sure where you go from there. When looking at graphs, generally I just see spectral response (y) and wavelength (x). There aren't any units for spectral response so I find this quite confusing. Am I just sampling the pixel values of each image taken? Is there some sort of conversion/function/software that let's me calculate this for each of the camera's channels? 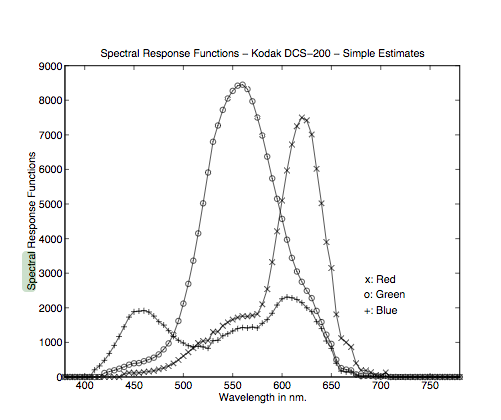 Okay, I've seen some of your responses but I'm still not sure I understand. Perhaps there is a more comprehensive resource I could be pointed to? My ultimate goal is to take the spectral response of a camera and use it to generate a model of animal vision by pairing with the results of photoreceptor responses in the retina.

There are two ways to express the wavelength dependent sensor responsivity in the context of a system analysis.

First, it can be expressed as a percentage. This can be a peak normalization, in which case the highest value will be 1.0. More commonly, the percentage is expressed in units of quantum efficiency. For most consumer cameras this will average about 30-40% but specialized BS-CMOS sensors could hit 85% without a bayer filter.

The advantage of the latter value is that the digital count response can be directly calculated from the irradiance. One need only account for loss of light to the lens assembly and, if present, the microlens array. This can generally be done as "mental math." Converting relative or absolute quantum efficiency to digital counts, on the other hand, requires that the digital response be calculated via plank's constant and the sensor quantization formula.

Not the answer you're looking for? Browse other questions tagged sensor sensitivity or ask your own question.

14
Why is sensor sensitivity called "ISO"?
2
How does the spectral sensitivity of different sensors affect the resulting photo?
5
What do "dark current" and "sensitivity" mean for a camera module?
5
How is the spectral response of a camera typically measured?
43
Why don't cameras offer more than 3 colour channels? (Or do they?)
5
Can we compare the color reproduction accuracy of 2 camera sensors only by looking its sensor spectral sensitivity curve?
13
Can I mimic animal "tapetum lucidum" in a film camera?
2
What is meant by photographic sensitivity?
5
Camera suddenly sees much less than usual