What causes the odd white light tint at places like Zion National Park?

I'm currently visiting Zion National Park in Utah. One of the first things everyone in my group noticed is that, even on clear days (which are the only type we've had so far -- so this isn't a fluke), direct sunlight is a bit blueish. It's fairly subtle; around 6100-6200K based on my adjustment of the the WB on my camera manually, but it's enough to wash out the obvious red fringes in the terrain if I'm taking photos with my cell phone, which only has auto WB.

What causes this kind of tint? Is it just the higher altitude and different atmosphere relative to where I usually take photos (closer to 1000' above mean sea level)? Or are there some other factors at play?

The Sun emits light throughout almost the entire visible spectrum as well as in the infrared and ultraviolet parts of the electromagnetic spectrum. There are a few small gaps in the visible spectrum where the sun does not emit those wavelengths, but there are not many of them. When viewed from outside the Earth's atmosphere, the sun appears to be white. 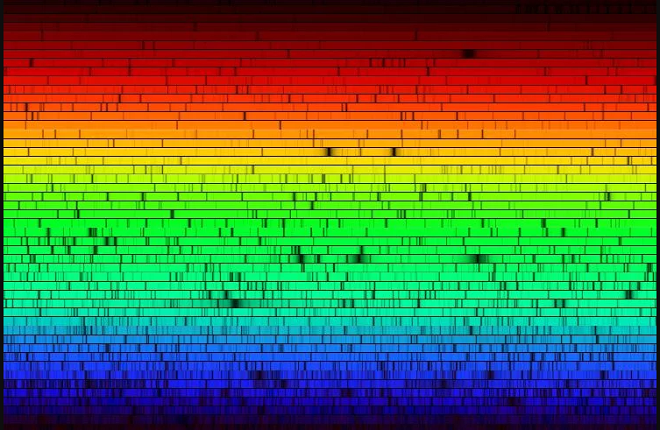 The portions of the visible spectrum emitted by the Sun

The greater thickness of the Earth's atmosphere sunlight passes through and the more water vapor and other light absorbing and light scattering substances there are in that air, the more of the blue/violet parts of the Sun's light is scattered and the remaining light is thus dominated by the yellow/orange/red end of the visible spectrum.

Even at sea level the Sun's light appears much bluer during midday when the Sun is high overhead and its light is passing through the atmosphere at a near perpendicular angle. Conversely, at sunup and sundown the light from the Sun is near tangential and almost all of the blue end of the visible spectrum is absorbed and scattered by the atmosphere before it reaches our eyes.

When you are in a 'high desert' area such as that around Zion National Park in southern Utah, you're at a higher elevation than sea level. The Zion area ranges from about 3,000 feet or higher in elevation, the Bryce Canyon area is between 8,000-9,000 feet, and the nearby Cedar Breaks National Monument is 10,000 feet above sea level.

You're also in a remote area with an arid climate. There is less moisture in the air than one would normally find in many populated areas. Normally in such remote areas there are also fewer particulates in the air that scatter the Sun's light. As you have observed, the air is very clear in such places.

Without the 'full' depth of the atmosphere at or near sea level and the more typical amounts of moisture and other particulates in the air that absorb more of the Sun's light from the blue end of the spectrum in most heavily populated areas, more of the blue/indigo/violet portion of sunlight is still a component of the light when it reaches the Earth's surface in places such as Zion National Park than it is in places at lower elevations with more water vapor and particulates in the air.

Not the answer you're looking for? Browse other questions tagged white-balance high-altitude or ask your own question.