Why would someone buy the Canon 5D Mark IV after Nikon released the D850 with far superior hardware configurations?

I was planing to buy canon 5D mark iv just one month ago. But everyone started to talk about Nikon D850 and it came out with far ahead hardware configurations compare to 5D4. Though I love canon colors, focus system and ergonomic design now I cant make my mind to buy 5D4 after looking in to the Nikon D850 specifications. But I see people still buy 5D4 continuously. What is the real reason other than the lenses collection they still go with 5D4 though there is a clear difference in hardware configurations with D850?

Some of the obvious factors to consider:

Then there are the more direct comparisons between two models. What the hype machine may tout as the latest, greatest, hottest new feature or performance spec may be minimally relevant to many photographers. The differences that seem so huge at sites such as DxO Mark may not make much, if any, difference in the final image quality of many images for a particular photographer. For example, how one camera may tolerate pushing the shadows on a four-stop underexposure compared to another is irrelevant to a studio photographer who has total control of the light and the scene.

Let's look at the two models mentioned in your question, the Canon EOS 5D Mark IV and the Nikon D850. Some of the major differences:

Many other things may or may not be significant to a particular photographer:

In many ways the D850 is more comparable to the Canon EOS 5Ds R (a 50.6 MP camera with no low-pass/anti-aliasing filter in front of the sensor). The 5Ds R is older having been introduced back in 2015. There are still advantages and disadvantages between the 5Ds R and the D850. We'll not go into a detailed survey here, since the question asked about the 5D Mark IV, but many of the 5D4's strengths are also contained in the 5Ds R (AF system, RGB+IR metering, AEB, AWB bracketing). Others are not (Frame rate is slower, buffer depth is smaller, No built-in WiFi or GPS, and max ISO is lower).

And let's not forget service. At least in the U.S., Canon Professional Services turns around most repairs in less than a week at a significantly lower average cost than Nikon Factory Service does in the three-plus weeks they average to turn around repairs. Roger Cicala at lensrentals.com is not shy about frequently pointing this out. If anyone should know about using both manufacturers' U.S. repair service, it would be Roger. He is the founder of the largest lens and camera rental house anywhere in the world. When your camera gear are the necessary tools that allow you to make an income, time is money. No one wants to pay twice as much to wait three times as long to get your tools back.

There are lots of reasons but the main ones are :

Handling could easily have been the top item for many people. A high end system used by a pro in a critical shoot is no time to find out you're fumbling for the control you want in the wrong place by instinct or habit. It can take a lot of effort to configure a high end system the way you want.

Their collection of lenses is sufficient reason by itself. When you've spent thousands of dollars on lenses, throwing it all out to switch systems doesn't make a lot of sense.

But the 5D Mark IV also has some other things going for it:

That first one is actually a much bigger deal than it sounds like. It means AF in video mode works well, it means that focus in live view mode is roughly as fast as focusing through the viewfinder, etc.

Also, the D850 really seems to be targeted at the 5DS market, rather than that of the 5D Mark IV. Because of their resolution, those cameras produce RAW files that are comparable with the 5D Mark IV's dual-pixel RAW mode, which most users probably leave turned off to avoid the factor-of-two difference in file size.

You ask, "What is the real reason other than the lenses collection..." (emphasis is mine) You seem convinced there is some other "real" reason.

People don't just buy a camera body; they buy into a camera system. Do you really think that people should just jump ship to another brand every time a new camera appears with some new "competition-beating" feature? What should they do when (theoretically) Canon releases the 5D Mark V?! 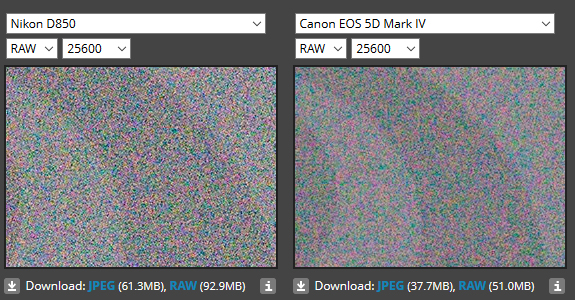 Not the answer you're looking for? Browse other questions tagged canon nikon equipment-recommendation dslr or ask your own question.

5
Which one would you suggest to buy from canon, the 550D or the 50D ?
0
What advice do you have on choosing between Canon 60D and Nikon D7000?
6
What should a beginner buy with Nikon D90 and the kit lens?
8
Why are Canon and Nikon the biggest camera manufacturers?
1
Why does the Canon 1D Mark III cost more than the 1D Mark IV?
14
Would the 40mm pancake or 50mm prime be better for street photography with a Canon APS-C camera?
0
Canon T3i: Why would shots I took be missing on the card?
0
Why is my Nikon D850 view finder dark and dim with my new 28-300mm lens?