Why are my low light photos noisy /blurry, but Alien is perfect?

I know that there are a few questions here already about low light photography and image noise. I want to know why Ridley Scott can shoot very low light scenes (including publicity stills), yet I can't. 1/24 sec exposures are comparatively huge for motion photography, yet his film looks amazing and my cave photos are naff (I'm a caver, sorry.) Similarly my mobile phone creations are full of noise, but his (film) images aren't. Am I missing something fundamental between the two arts?

Why are my low light photos noisy/blurry, but Alien is perfect?

There's a world of difference between creating a dark image and creating an image in the dark!

The scenes in a Ridley Scott sci-fi movie like Alien are often dark, but that doesn't mean that the set looked that way when the scene was shot. Directors and cinematographers think a lot about exactly how they want a scene to look, and they know how much light they need to use in order to get the result they want with the particular lens, camera, and film that they're using. The scenes in Alien (and Blade Runner, etc.) aren't dark because there wasn't much light; they're dark because Scott wanted them to be dark, and he* used as much light as he needed to get that look on film.

It sounds like you, on the other hand, are trying to photograph some found scene that looks to you like something out of a Ridley Scott film, and you're disappointed when your shot doesn't work out the way you see it. That's an entirely different situation -- you're trying to work within the limitations of the light that's already there, and that forces you to make some compromises. Look at the shutter speed, aperture, and ISO settings of one of your disappointing shots. What if you could take the same shot, but at a shutter speed of 1/250s instead of 1/15s? And what if you could use ISO 100 instead of 1600? The shorter exposure and lower ISO should solve any blur and noise problems. However, if you want the exposure to be the same you'd have to compensate by adding 8 stops of light! Ridley Scott can do that in a studio, but you probably can't in the scene you're shooting.

his film looks amazing and my cave photos are naff

Don't take it too hard -- he was working with a budget of $10 million (that was a lot in 1978), a team of highly trained professionals, and a camera that gave significantly more control than the one in your smartphone. On the other hand, people back in the 1970's didn't carry supercomputers in their pockets. You may not have the resources of a film production company, but you might be able to get closer to what you want with the right combination of smartphone and software. For example, consider Apple's recent announcement of the iPhone 8 and iPhone X and their new low light and portrait photography features.

*Decisions about exactly how much light to use and where to put it in order to achieve the look Scott wanted were surely made by cinematographer Derek Vanlint, not by Scott himself.

There are multiple possibilities:

Noise is an inherent attribute of the sensor. It is dependent on both sensor size and quality. Noises primarily occur due to cross-talk between individual elements, here a bigger sensor size can reduce the amount of cross-talk as each element will be further away from its surrounding elements.

So the further away the elements are from each other the less cross-talk takes place. But the distance between the sensor elements is not the only factor, how well they are isolated is also crucial.

Other than this sensor parameters Camera Parameters like ISO, aperture and shutter speed also play an important part 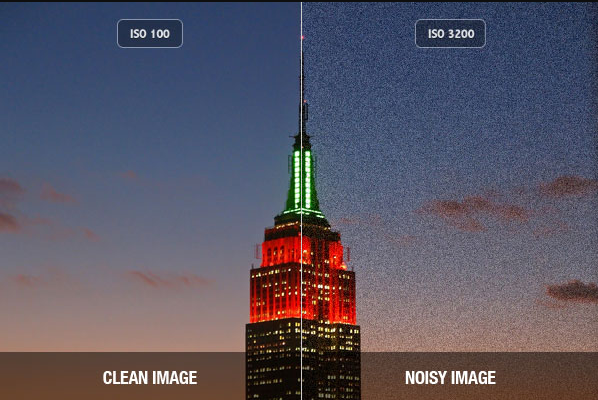 In addition you can use post processing as well.

For mobile images specially, post processing is a must as the original images are corrupted with noise due to very compact sensor sizes. Each vendor has its own noise reduction but for the use-cases you are mentioning this wont be sufficient.

Not the answer you're looking for? Browse other questions tagged noise movie or ask your own question.

16
What does it mean to “kill the ambient”?
7
What's the best technique to take brighter photos in demanding low light conditions?
3
Were these Robert Frank photographs made by underexposing in camera versus in development?

8
Why are sensors less sensitive to blue light?
1
Why are my pictures noisy when zoomed at 1:1 in Lightroom 4?
2
Photos taken with Canon ef2 24mm lens on a Canon 200D are incredibly noisy
6
Long exposures create red noisy glow.. but only with one of my lenses. Why?