Is it possible to do holography with a DSLR?

If I'm understanding this right, a “hologram” is an ordinary black and white photograph that has been exposed in an extraordinary way. A normal image is exposed under white light, using a complicated system of lenses to try to make the light rays converge into a coherent image. If I understand correctly, a hologram involves illuminating a scene with two identical laser light sources, and having no lenses at all; the photographic system simply records the interference pattern of the two lasers (which depends on what they're illuminating, and hence records an image).

Now, presumably the size of the interference patterns is comparable to the wavelength of the light involved, which is where I suspect there might be a problem. For example, my camera has a dot-pitch of 5μm (and a Bayer filter). The wavelength of red light is more like 600nm or so, which is quite a bit smaller.

I gather normally they use glass plates coated in photographic emulsion, which presumably has considerably better spatial resolution.

So, in summary, can you make holograms with a DSLR? Has anybody done this? Or is it a fool's errand?

(Of course, assuming you manage to take the picture, printing it may also be... entertaining.)

Apparently - yes, it is possible to use digital sensor, such as the one present in DSLRs to record holograms. Displaying or printing such holograms is of course another challenge. The examples I found focus on extracting 2D images from the recorded hologram (digital holography reconstruction). 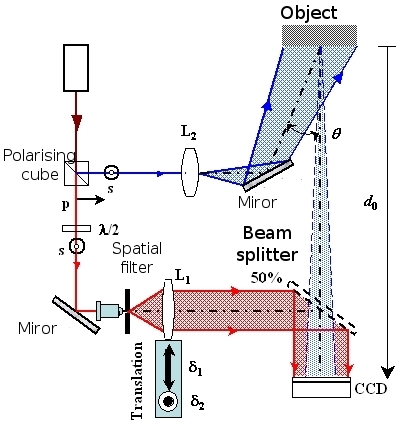 Holography is a unique way to image objects and record them as three-dimensional pictures. The exposure is made utilizing photographic film. A coherent light is used. This is a light that outputs at a solitary frequency. A leaser outputs a coherent light beam. This beam, called the illumination beam is directed at the object.

A light sensitive photographic film, preferably an emulsion on a glass plate or on a stiff film base is placed so that reflected leaser light off of the object, plays on the plate.

The arrangement as above is configured in normal room light minus the light sensitive plate. The lights are turned off and in total darkness the plate is positioned. The laser is briefly turned on to make the exposure. This will be a trial-and-error timing of the duration of the laser exposure.

Once the film is exposed, it is developed as a negative or more likely as a positive (slide). When developed and dried, this hologram is illuminated from behind with a laser or perhaps a point-source light. A 3 dimensional image of the object is seen. The hologram image is formed by light inference action between the two laser lights, i.e. the illumination beam and the reference beam.

Could an SLR camera be used? We need darkened container to hold the film in place without exposing it. The camera body could serve and its shutter could be utilized to time the exposure. No camera lens is uses so the answer is, yes you can use a camera. You are after a device to hold film, keep it away from light until the exposure and you are after a shutter, that all you need.

I frankly have never used a DLSR to make a hologram. I don't known how you would view the image and get the needed interference pattern. As far as I know, film is it for holograms.

Not the answer you're looking for? Browse other questions tagged dslr or ask your own question.

5
Do "body only" DSLR cameras come with a battery?
3
Cheapest DSLR with vari-angle LCD live-view screen?
3
DSLR Workflow with ultrabooks
1
DSLR with a basic lens only?
1
Can you use a DSLR with a selfie stick?
7
Is it possible to make a photo's EXIF look like it was taken with a DSLR?
2
Digiscoping with superzoom or DSLR? (with spotting scope)
4
Is is possible to externally power my DSLR with the original battery that is connected to the DSLR by means of wires?
2
Can cycling with a DSLR damage it?