How do I capture artificial light sources better?

I am quite new to photography and was looking into how I can take better indoor photographs, particularly around night time.

I'm currently in a hotel room for the night and decided to try and take a picture of my room to test out my tripod which I haven't used before. However I noticed no matter what I set my camera settings to the artificial lights (particularly the lamp on the left, image attached) just appeared very washed out. You can't tell any detail about the lamp shade all you can see is just some sort of light but not much to it.

Given that I wondered whether the solution would be to take a HDR image or take a normal exposure and an underexposed image and blend them later? I understand that artificial light like this can be very hard and harsh but I wondered if there's a way of improving the result with looking away from it?

I wasn't trying to take any particular special picture here but just test out my camera a bit more but this was the first thing I noticed and I didn't know how to fix it. Any tips would be greatly appreciated. 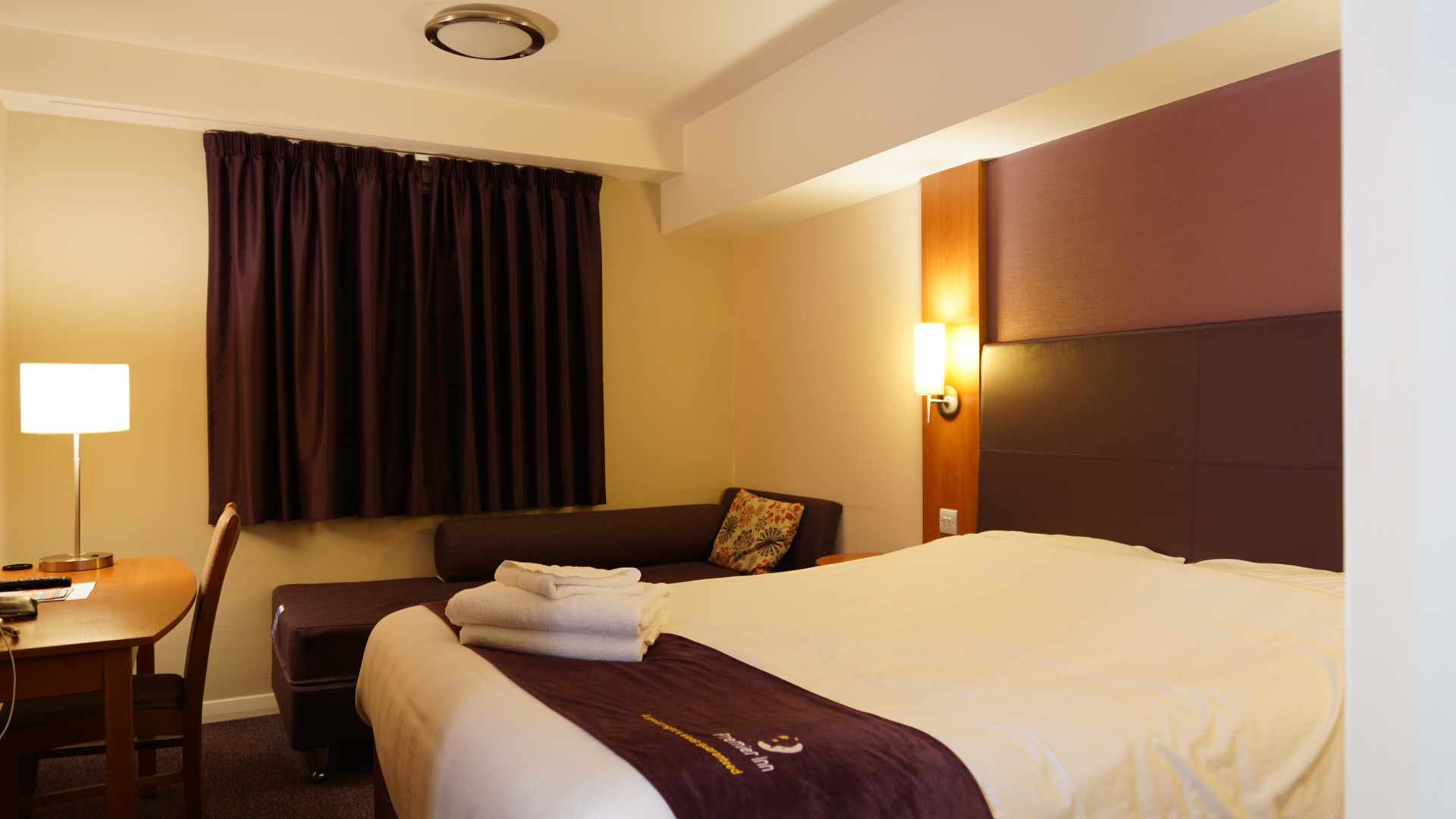 As you have discovered, your camera is limited with regard to the brightest and darkest details it can capture at the same time. In order to keep the lights from 'blowing out' you must limit exposure to the point that the rest of the scene is extremely dark. In order to capture details in the darkest parts of the scene, you must allow the brightest parts (the lights) to blow out.

The secret to many good photos lies not in learning how to capture both extremes simultaneously, but rather in learning how to arrange a scene and compose an image so that such extremes are not present in the frame at the same time. To do this requires the photographer to take control of the light so that the way the camera sees the scene looks the way the human eye/brain would normally see the scene.

You could have, for instance, turned off the two lights present in the frame and instead lit the scene using a light from beside or behind the camera. If you wanted to create the 'feel' of the lights being on, you could have placed much dimmer light sources (very low energy bulbs) in place of the bright bulbs in the fixtures, used a dimmer circuit between the wall socket and the lamps to reduce the amount of current going to the lights, or even placed small battery powered lights inside the lampshades.

In this image it looks like the overhead lights are on normally, but in fact they are dimmed to the point it was barely possible to tell they were on at all with the naked eye at the time. Most of the light in the scene was provided by off camera strobes. The image is actually a double exposure but the settings were identical for both frames. The two persons were only present for one of the exposures. 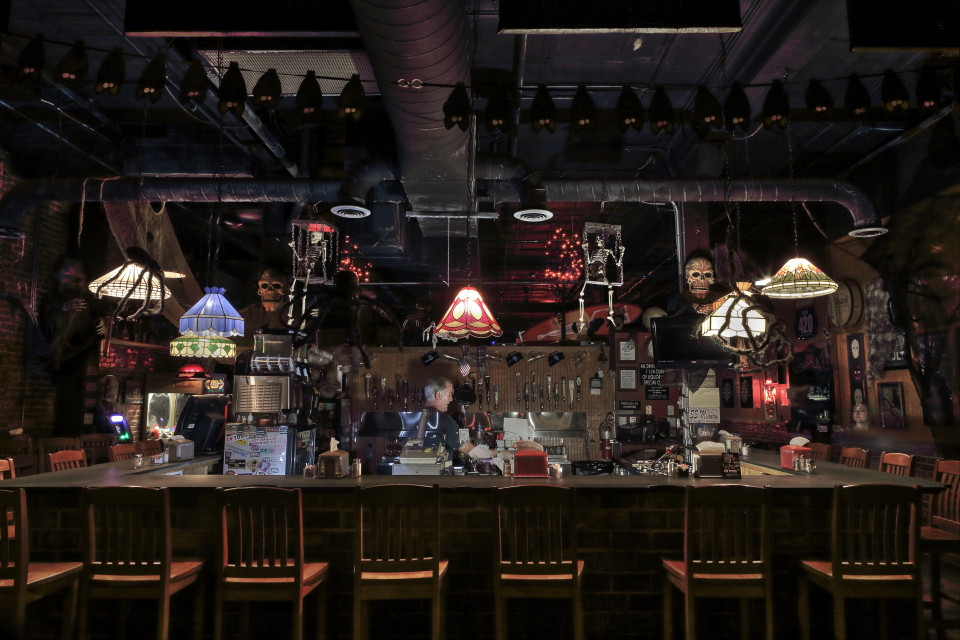 That's really interesting thanks for the answer. In regards to the image above was the light coming from behind the camera? Also with the double exposure do you mean 2 images were taken where one was darker than the other?

No light from behind the camera other than what was spilling in through the large plate glass windows about 30-40 feet behind the camera. It was early evening, but the street has some fairly bright sodium vapor lights up and down it. My purpose, though, was to make the bar, which was decorated for Halloween, look as spooky as possible. That's also why I didn't mind pushing the shadows and leaving the noise in the dark areas to the top and sides so far - they give the scene an even more surreal quality. If I had wanted it to look more well lit, I would have needed several large strobes with large modifiers to diffuse the light evenly placed behind and on either side of the camera. In a smaller space such as your hotel room, one light properly positioned and modified would have been more than enough to light the entire room. The main point of including this image was to show that to make a lamp that is in the frame look 'natural', one has to significantly reduce the power of the light coming from inside the lamp to make it appear as it does to our eyes when at normal power.

The majority of the light in the frame was provided by two strobes placed behind the bar counter on a lower counter used by the staff and pointed directly up at the two hanging skeletons in cages. Neither flash had any modifier attached other than the built-in wide angle panels, which were flipped out over the front of each flash. I can't remember where or if I had any reflectors, but there is a lot of stainless steel in the serving area of the bar and that reflected the flash all over the place.

Exposure and flash settings were identical for both exposures. The only difference was the presence or absence of the two people in the frame. They were present in one and not present in the other. The image with the people present was superimposed on the other with no masking to either image. I don't remember the opacity setting for the second layer, but it was adjusted so that the bartender was semi-translucent. Where he is standing is in front of the cash register that can be seen through his torso. The disembodied head to the right was a happy accident. She thought we were done and was walking by. The flash only illuminated her head, the rest of her body, seen as a blur trail because the shutter time was much longer than the flash duration, was masked by the height of the bar. Although it is not obvious, she was positioned several feet behind the support column with the 'S.S. Minnow' sign on it and quite a bit further back than the chairs lined up on the side of the bar. The chairs around the bar were illuminated by the light coming from the very dim lamps.

The way this is controlled is to take control of the lighting yourself: increase the amount of light in the room and possibly decrease the brightness of the light sources. On a movie set they'd use very low powered bulbs and/or gels/shades to significantly reduce the brightness of any light sources that were going to appear in-frame, and then replicate that light by shining light onto those areas from off-frame. If you watch a movie or big budget TV show and there's a lamp in a room, the lamp will be very dim, and there will be a spotlight from off-frame shining onto the area to more evenly light it or maybe even hidden behind an object (think, the oft-recreated dinner scene in American Beauty with the lamp behind the flower vase - among other places).

And you try to get some nice soft light shining into the rest of the room to bring it up closer to the level of whatever highlights you have. If you control the light you have control over the dynamic range in the output, too. For example, for real estate photography you want flat as possible lighting, and for something "dramatic" you will want a bit more.

This article is a good example of some of these techniques.

Before / After from article (see article for the setups etc) 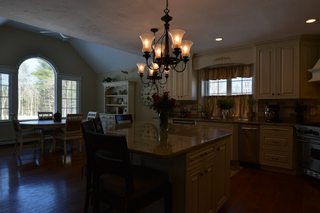 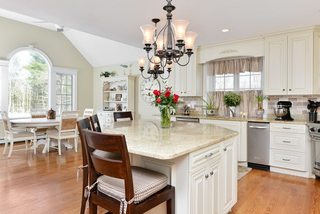 Not the answer you're looking for? Browse other questions tagged exposure low-light indoor or ask your own question.

15
How can I handle two extremely different brightnesses in the same picture?
3
Product photos of lamps
-1
Restrict Over Exposed images
0
Taking pictures of lamps or chandelier

5
How do I get crisp indoor or low light images from my point and shoot?
0
Low light photography with lens limitation
5
Inconsistent exposure with same settings--why?
3
How can I take better pictures in an indoor pool?
3
How do I warm the background color but keep natural color in the subject?
2
How do I prevent and/or remove hot pixels in my shots?
0
What is optimum setting for capture in night from moving objects, when diaphragm is fixed?
1
How to take a dark photo of a dark room?
3
How to shoot nice shots in indoor nightclub?
1
How do phone cameras capture better overall exposures than my camera?