Tips for photographing art (at a museum)

I'm going to the Met tomorrow. What are some tips for photographing in a museum? I'm looking for technical aspects (I won't have control over lighting and can't use flash) as well as artistic aspects (like composition).

First thing first: check the museum photography policy. It's usually available on the museum Website. Ususally, photography is permitted in the permanent collections but not in the temp exhibits.

Still photography is permitted for private, noncommercial use only in the Museum's galleries devoted to the permanent collection. Photographs cannot be published, sold, reproduced, transferred, distributed, or otherwise commercially exploited in any manner whatsoever. Photography is not permitted in special exhibitions or areas designated as "No Photography"; works of art on loan from private collections or other institutions may not be photographed. The use of flash is prohibited at all times and in all galleries. Movie and video cameras are prohibited. Tripods are allowed Wednesday through Friday, and only with a permit issued by the Information Desk in the Great Hall.

For press and other special photography, including film and videotape projects, please contact the Communications Department during business hours by phone (212-879-5500, ext. 3441) or fax (212-472-2764). See The Image Library for more information about requests regarding photographs of works of art owned by the Museum for any purpose other than private and noncommercial.

The Museum reserves the right, at its sole discretion, to withhold and/or withdraw permission to photograph on its premises or to reproduce photographs of objects in its collection.

Try to position yourself so that the lights aren't reflecting directly off the surface of the artwork and causing a hotspot in the image.

A longer lens will make this easier than a wide angle lens.

(This tip cribbed from Light: Science and Magic)

I was at the Met last week actually. A few people suggested you bring a fast lens, and that's very true, especially since flash is not allowed (not that I have one on my camera anyway).

So far the assumption is that you want to take picture of the art. I wasn't interested in that, there is just too much, and professionals are busy doing it much better than me (see below). I wanted to take a few shots of the space itself, and if that's your thing, do bring a wide angle lens, some rooms are huge. I had a 24-105mm for versatility that day in NYC, but a 16-35mm f/2.8 would have been nice. For example (original here): 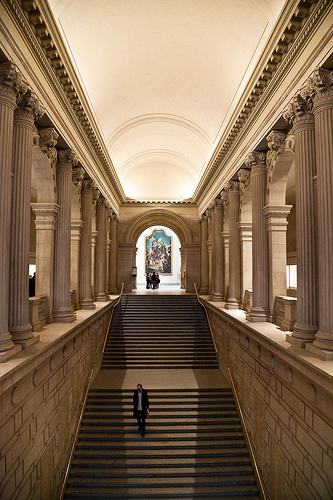 If your lens is not fast enough, consider going black&white, this can give an "interesting" look to the noise, in my opinion (see here).

Just for the anecdote, here is one of the professionals I mentioned above, busy capturing the essence of a sculpture. That's a lot of gear (original here): 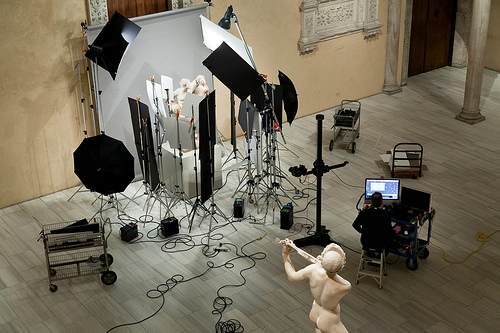 Right off the bat, you're going to want to have a fast lens, the faster the better. Light is going to be a major premium and having a fast lens will make a huge difference. Since wide open lenses can be soft, you can up your odds on a good outcome by going with a prime lens which is usually sharper than a zoom.

Now, some of that depends on the camera you're using. The most recent dSLR options out of Pentax (K-5), Nikon (D7000), or Canon (60D) are really solid at high ISO, so you can get away with a slower lens. I shoot with the Pentax K-5, so I don't hesitate up to ISO 6400 and thus I have some latitude with my lenses. For older models, ISO 6400 may be too noisy for art, especially in the fine detail of a painting. Anyways, I noticed from your profile that you're shooting the D7000 and that camera is sharing the same basic sensor as the K-5, so you're in good shape.

Anyways, given a choice, this is probably where I'd bring in a "nifty fifty" and look to use a 50mm lens with an f/1.4 aperture. I haven't been to the Met, but if they're like many others, a tripod is not allowed, so a fast 50mm will give you a solid performance. By the way, you may be able to sneak in a monopod... Worth trying. ;)

In this setting I find my slow, f/4 lens with stabilization much more useful that my fast f/1.2 glass. Paintings don't move, and the extra DOF is always useful.

And do ask permission before you even enter. Getting a written ok from someone at the ticket counter can prevent a lot of hassle with museum staff later on. Also be courteous towards both staff and other visitors. They have as much right to look at the works as you do, and if you're monopolising a gallery(or even a single important work) for 20 minutes trying to get your pictures "just right", preventing others from enjoying their visit, you're going to make museum staff angry which will harm not just you but future visitors wanting to bring cameras into the museum (I've seen this happen, photographers getting abusive towards other visitors who just want to watch something or walk through a room where the photographer is composing for ages and doesn't want anyone to walk through).

Not the answer you're looking for? Browse other questions tagged technique tips artwork or ask your own question.

36
How does one develop good photographic vision and style?
28
What tips and advice do you have for photographing the Aurora Borealis?
6
How should I light 2d artwork in a makeshift studio? What lighting products do I need?
18
Tips for Shooting Crowds, Political Demonstrations, Rallies and other 'Lively' Events
13
What “Top Tips” should I give compact camera users in a short talk?
3
What advice would you give for taking photos on a boat cruise at night?
13
How can I get perfect sharpness when shooting still art?
2
Lens Advice for Product Photography
1
Looking for tips for indoors maternity shoot