Why do stars appear as circles, not points? 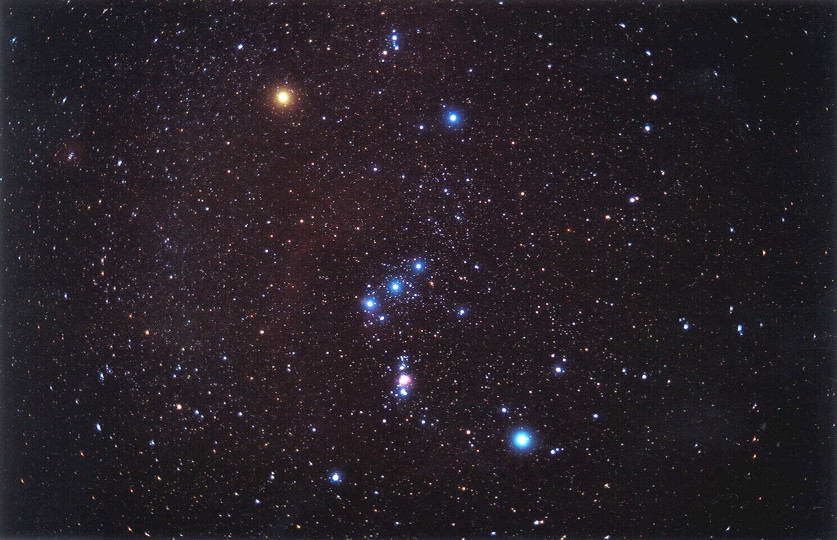 Excluding the Sun, stars are so far away that their angular diameter is effectively zero. However, when you take pictures of them, brighter stars appear as circles, not points. Why?

In theory, any star, regardless of brightness, should hit at most one small point of whatever medium is being used to take the photograph. Why do nearby points of the medium also respond? Does excessive light "bleed" into nearby points, and, if so, is the "bleeding" the same for digital and non-digital cameras?

Does it have something to do with the lens? Does the lens expand a single point of light into a small circle, depending on brightness?

I ran into this while trying to answer https://astronomy.stackexchange.com/questions/22474/how-to-find-the-viewing-size-of-a-star which effectively asks: what's the function (if any) that relates star brightness to the size of a star's disk on photographic film (or digital media)?

EDIT: Thanks for all the answers, I am still reviewing them. Here are some additional helpful links I found:

optics astrophotography brightness
Share
Improve this question
edited May 27 '20 at 16:28

Whenever light passes a boundary, it diffracts, or bends, due to the wavelike property of light interacting with that boundary. An aperture in an optical system, typically circular or circle-like, is one such boundary.

How light interacts with the aperture is described by the point spread function (PSF), or how much and to what degree a point source of light spreads as a result of passing through the optical system. The PSF is determined by the geometry of the system (including the shape and size of the aperture; the shape(s) of the lenses; etc.) and the wavelength of light passing through the optical system. The PSF is essentially the impulse response of the optical system to an impulse function, a point of light of some unit amount of energy that is infinitesimally narrow or tightly bounded in 2D space. 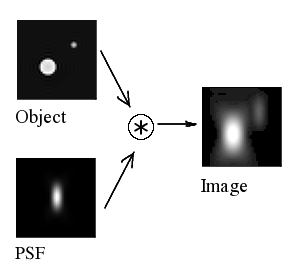 The convolution of light from the subject with the point spread function results in a produced image that appears more spread out than the original object. By Wikipedia user Default007, from Wikimedia Commons. Public Domain.

For a perfectly round aperture in a theoretical optically-perfect imaging system, the PSF function is described by an Airy disk, which is a bullseye-target-like pattern of concentric rings of alternating regions of constructive interference (where the light's waves interact constructively to "add up") and destructive interference (where the light's waves interact so as to cancel themselves out).

It's important to note that the Airy disk pattern is not a result of imperfect lens qualities, or errors in tolerances in manufacturing, etc. It is strictly a function of the shape and size of the aperture and the wavelength of light passing through it. Thus, the Airy disk is a sort of upper-bound on the quality of a single image that can be produced by the optical system1. 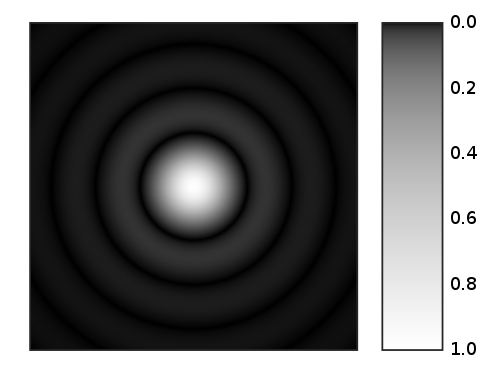 A point source of light passing through a round aperture will spread to produce an Airy disk pattern. By Sakurambo, from Wikimedia Commons. Public Domain.

When the aperture is sufficiently large, such that most of the light passing through the lens does not interact with the aperture edge, we say the image is no longer diffraction limited. Any non-perfect images produced at that point are not due to the diffraction of the light by the aperture edge. In real (non-ideal) imaging systems, these imperfections include (but limited to): noise (thermal, pattern, read, shot, etc.); quantization errors (which can be considered another form of noise); optical aberrations of the lens; calibration and alignment errors.

The size of the "point" is affected by the wavelength dependent "Point-Spread Function" (PSF) of the lens system you're using.

Diffraction of light, which determines the system’s resolution limit, blurs out any point-like object to a certain minimal size and shape called the Point Spread Function. The PSF, then, is the three-dimensional image of a point-like object at the image plane. The PSF is usually taller than it is wide (like an American football standing on its tip), because optical systems have worse resolution in the depth direction than in the lateral direction.

The PSF varies depending on the wavelength of the light you are viewing: shorter wavelengths of light (such as blue light, 450nm) result in a smaller PSF, while longer wavelengths (such as red light, 650nm) result in a larger PSF and therefore worse resolution. Also, the Numerical Aperture (NA) of the objective lens that you use affects the size and shape of the PSF: a high-NA objective gives you a nice small PSF and therefore better resolution.

Surprisingly the PSF is independent of the intensity of the point. This is true for both astrophotography and microscopy.

There are a few reasons I can think of:

I took a small area from your photo and enlarged it (resampled by a factor of 10). 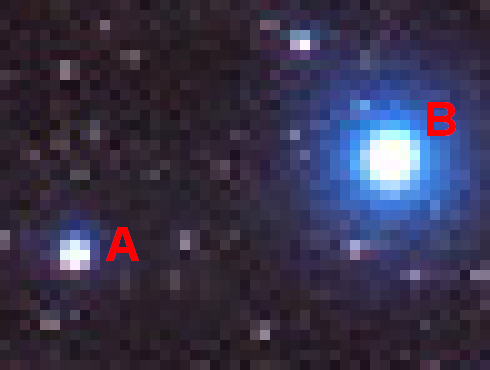 I marked two interesting regions. Region A indicates a star, blurred by the optics approximately into an 3x3 pixel area with a peak of diameter 2-3 pixel, I would say. This is the blurring effect as described in scottbb's answer.

However, the bright star at position B is much wider and also shows saturation in the center. My guess is that this additional broadening is caused by pixel bleed through or just by saturation.

is the "bleeding" the same for digital and non-digital cameras?

Probably not. Non-digital cameras have a much higher contrast range, so saturation may be less of an issue and pixel bleeding which is an electronic effect might not occur at all.

However, with a HDR recording scheme within a digital camera one should be able correct for the additional broadening and make spot B look like spot A only much brighter.

To change the size of the blurring effect you could play around with the aperture of your camera and image stars (or printed dots on paper, if stars are not available or a small hole in dark cardboard with a light source behind far away).

Well studied by George Airy, Astronomer Royal, published in 1830. Now called the Airy disk or Airy pattern, a point source star images with an alternating light and dark rings surrounding a central disk. The diameter of the first dark ring is 2.44 wave lengths for a well corrected lens with circular aperture. This is a key fact when regarding the resolving power of a lens. It is difficult, but not impossible to image these concentric rings. Most images amalgamate these rings.

John Strutt, 3rd Baron Rayleigh (Astronomer Royal) further published what is now called the Rayleigh Criterion covering the theoretical maximum resolving power of a lens. “Resolving Power in lines millimeter is 1392 ÷ f-number. Thus f/1 = 1392 lines per millimeter maximum. For f/2 = 696 lines per millimeter. For f/8 = 174 lines per millimeter. Please note: Resolving power for apertures larger than f/8 is higher than film intended to be pictorially useful, can exploit. Also, resolving power is measured by imaging parallel lines with white spaces between. When finally ruled lines are seen to merge, their spacing is the limit of resolution for that imaging system. Few if any lenses have bested the Rayleigh Criterion.

There are two factors here.

The first is optical, in any imagine system various affects come into play, including diffraction, imperfect focus and for terrestrial telescopes the affects of the atmosphere. These affects come together to spread a point of light over an area on the film or sensor and they can be represented by a mathematical function known as a "point spread function". These functions do not have a hard edge, as you get further from the center the light will get weaker (possibly with some oscillation) but it doesn't go away completely.

The second is in how the film or sensor (or even your retina) reacts to light, there is a relatively narrow range of light intensities that will be usefully recorded, light that is too strong will saturate the film or sensor, light that is too weak will be lost in the noise. The brightest objects in the sky are hundreds of times brighter than the dimmest that are visible to the naked eye.

This means that the visible size of of an object depends on it's brightness, for a dim object you only see the center of the point spread function, the rest is lost in the noise.

For a bright object the center of the point spread function is overexposed and appears as a white blob while the color of the object is only revealed in the border.

58
Why do light sources appear as stars sometimes?
12
What causes faint circles in astrophotography images?
3
Does an already set (or not yet risen) moon still wash out stars?
4
Which formula for f-numbers is correct: f/D or 1/(2NA)?
4
The right aperture for capturing stars?
3
Why do concentric circles appear in long-exposure photograph of the sky?
4
Why do some star trails appear blue?
22
How to capture more stars?
7
Why does the NEOWISE comet appear green on my photos?
1
How to distinguish between real stars and noise?