Why do the spokes bend in this photo?

This is obviously a high frame rate photo of a very close cycling race finish. What gets me is not the closeness of the race (although the closest I've ever seen). Rather, it's how the spokes appear to bend, including "displacement" of the drilled holes in the wheel. I find it extremely unlikely this is actually happening in real life (quantum physics anyone?). Can anyone explain what's going on here photographically? It reminds me of how sometimes spinning airplane propellers are distorted in some photos I've seen. 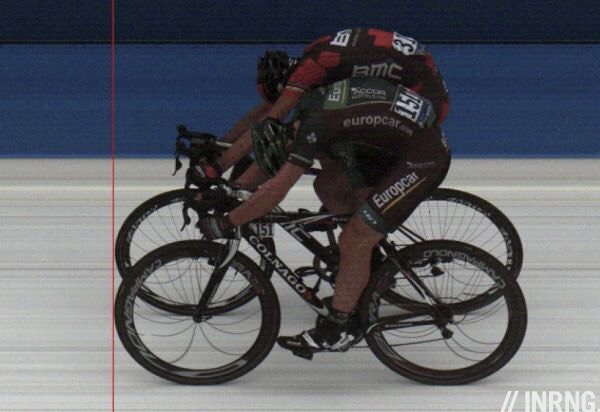 The bending of the spokes reflects the different times at which the spoke crossed the finish line and was captured through the slit. The entirety of the hub of the wheel crosses the line in a shorter amount of time than the circumference of the wheel.

Of course the spokes are not bending. It is an effect of (mostly) focal plane shutters. These take perhaps roughly 1/3 of a second for the shutter opening to move across the frame (speaking 35 mm film). Faster shutter durations are implemented by a second curtain following closely behind, closing the shutter opening after the measured delay. So a 1/4000 second shutter is implemented by a 1/4000 wide open slit moving across the frame in about 1/3 second.

Most focal plane shutters today move across the short frame dimension (faster). My guess (just my guess) is that this one was an older shutter (old camera, not the picture, 30 years or more) that still moved horizontally, left to right as we see it. Speaking of bottom half of the wheel, the outer end of the spoke was captured earlier in time than the inner end, so it appears curved after the wheel rotated more (shutter slit moved right).

The early classic example of this effect is 1912 picture by Jacques Henri Lartigue.

It is why cartoons show race car wheels as elongated ovals to indicate speed.

Not the answer you're looking for? Browse other questions tagged distortion or ask your own question.

20
What is a rolling shutter? When do I have to be aware of it?

4
why close ups are too wide
2
Auto cropping scanned document or photo
2
I noticed high lens distortion with my kit lens; is this normal, and how to avoid this?
12
Photo stretched at corners?
4
Why doesn't the GoPro automatically correct for the fisheye distortion?
3
Do the out of focus elements in this photo look normal?
2
Physical Distances at the edge of a photo compared to the center
1
What is the name of this distortion or artifact?