What is this camera / Can I develop the film?

I have this awesome-looking old film camera and I don't know anything about it: 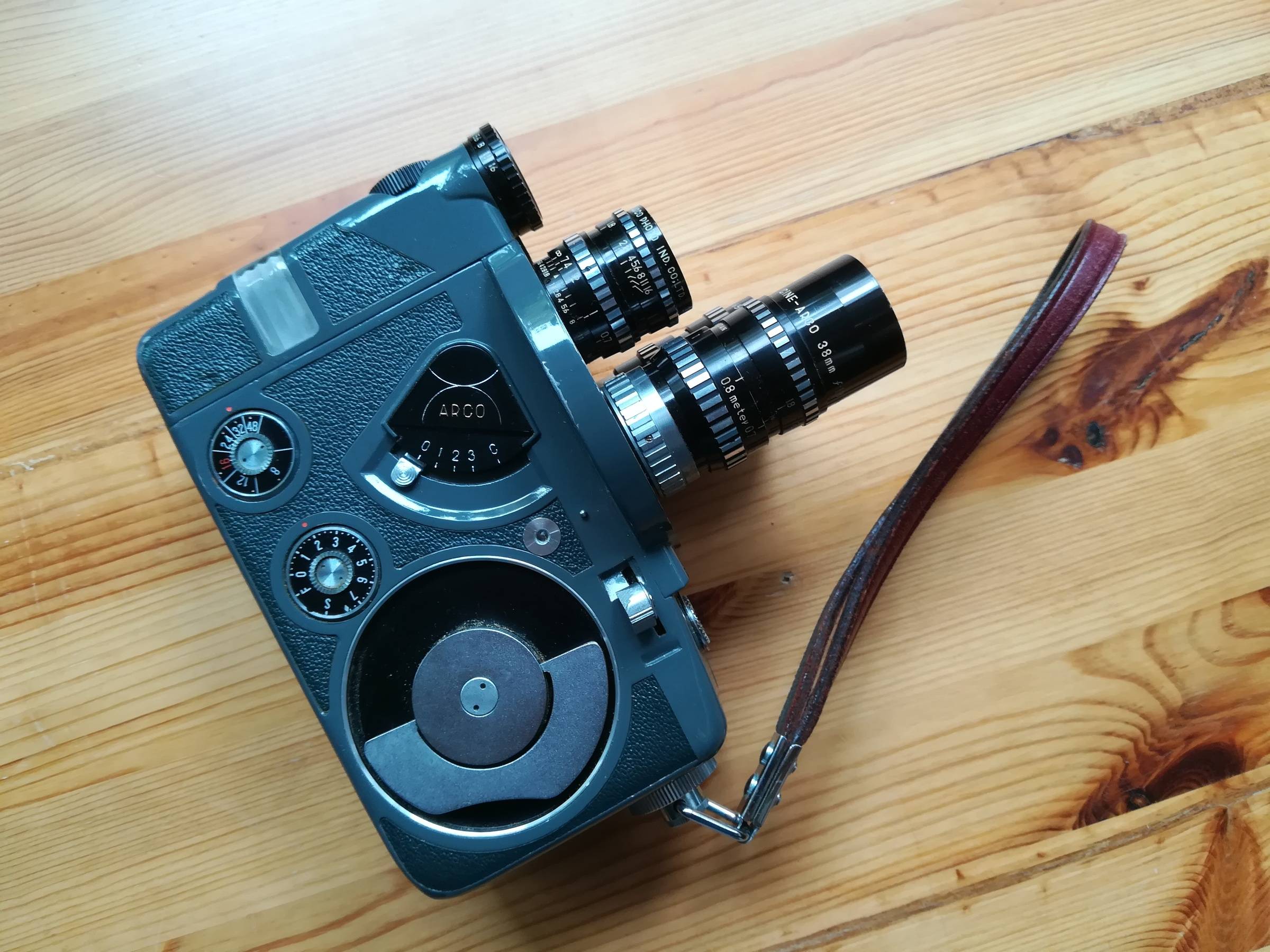 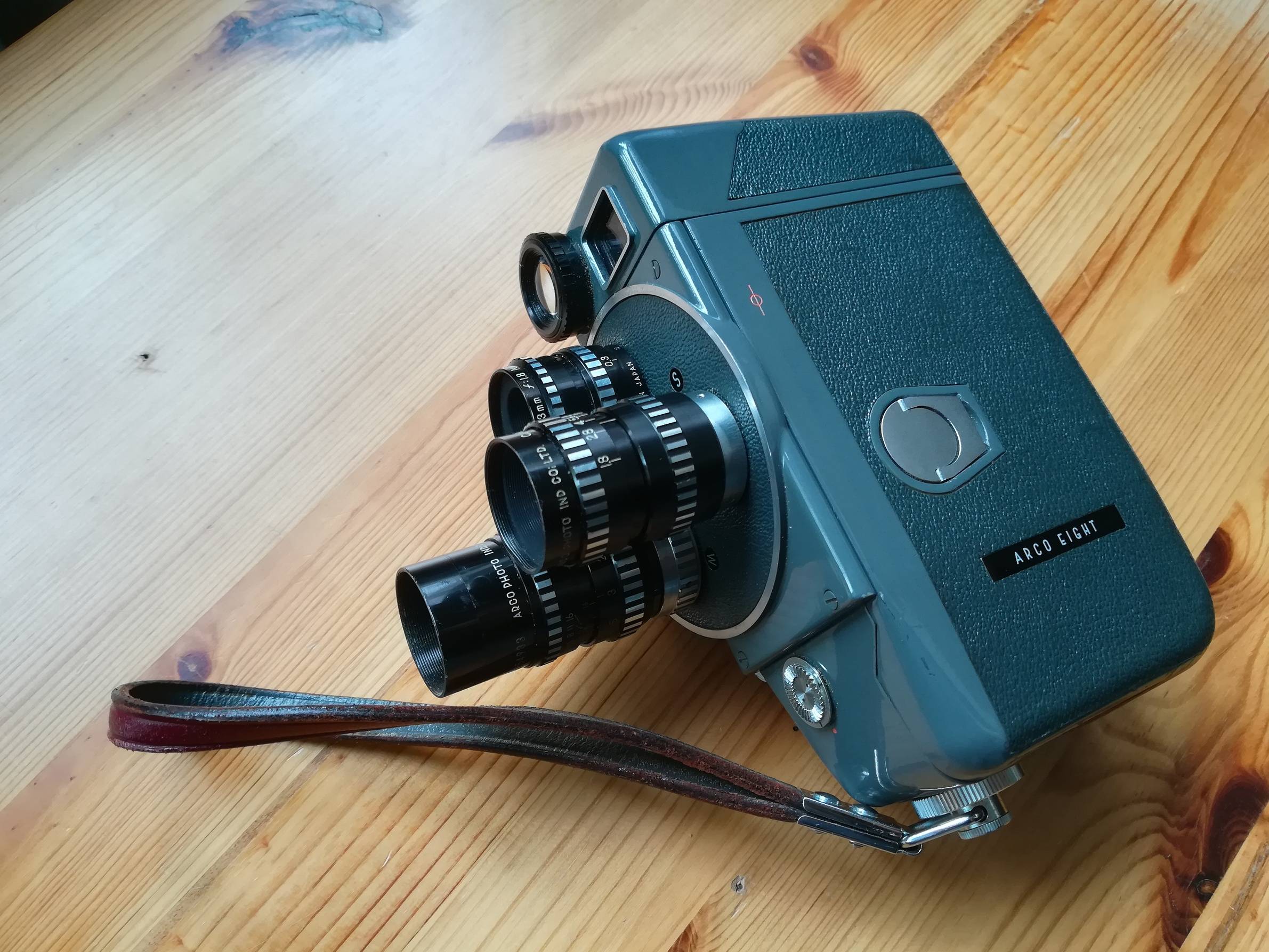 Can anybody possibly tell me something about it? I'm interested in the history of this cameras model as well as all the knobs and dials; for some of them I have no clue what they do.

Also, I think there still is a roll of film in it. Is there any chance it could be developed? I am just curious, but the film might very well have been exposed to daylight by now.

This is a 8mm movie camera made in Japan about 1956. That was about the date that home movies peaked. Like all 8mm cameras of that period, this camera was loaded with “double 8” film. This is actually 16mm wide movie film with sprocket holes on both sides. This film came wound a metal spool. You loaded the film spool in subdued light. You then began taking movies. The roll contained about 25 feet of film, enough for about 3 minutes of filming. After the roll was exposed, you removed the roll from the camera, turned it over, and re-loaded the same roll back into the camera. After the reload, you continued filming for about another 3 minutes. The exposed film was then sent out for developing.

At the developing shop (photofinishing shop), the film was developed by bathing it in a series of chemical baths. The now developed film was then slit down the middle and the two ends spliced together making a roll of developed movie film 50 feet long. When the film returned from the photofinisher, you got out your handy dandy 8mm film projector and screen. That evening you held an at home move show inviting your friends in to see a 6 minute home movie.

I advise that you put this camera on a display shelf so you and others can admire it. Some may reminisce the good old days of home movies (not me).

P.S. This camera was made before zoom lens became abundant. This camera featured a revolving lens turret holding three lenses. A telephoto, a “normal” and a wide-angle, could be manually rotated into place. Also, no electric motor to drive the film, on the side is a key wind, you turned it to wind the spring motor that moved the film during filming.

This is a camera for the 8 mm movie film - back from the era when "home movie" still involved actual film stock.

The camera make is Arco, it is of Japanese origin and the model seems to be Arco 8 (introduced 1956, last produced around 1960 when the company went bankrupt).

A side note: Super 8 as a format may be old, but it is alive and kicking. The film stock is still produced and seems to have become hip of sorts.

As for developing: while it could be done at home it is neither practical nor economical to do so.

Not the answer you're looking for? Browse other questions tagged film developing vintage old-cameras or ask your own question.

3
How far can you push process an accidentally under-exposed film?
4
Weird artifacts when using Tmax 100 for black-and-white reversal processing
4
Hold baggage xray scanners - how likely is it my film might have survived?
3
What process should I use for developing old (Ferrania?) CR50?
2
How do I know if it was old chemicals that did not produce images on the film strip or something else?
2
How do I identify an old unlabeled roll of 120 film?
5
My negative is completely black and opaque — is this a camera problem, my mistake, or the lab's?
2
Will hardener help prevent emulsion wash-off during development, 35mm B&W (ADOX CHS 25)