What shutter speed do professional sports photographers typically use for action sports like football and basketball?

In general they like to use the fastest they can get away with. Just how fast that can be is subject to a number of variables.

What focal length? How far is the shooting position from the participants? Does the photographer want to 'freeze' everything in the scene or leave some parts that move faster than others blurry to imply motion? How much light is present? How fast is your lens?

All of these things must be weighed to select the best shutter speed for a specific shot or series of shots. Under artificial lighting the compromise is often between the longest usable shutter time and the highest usable ISO setting because the lens is often already opened up to the maximum aperture. 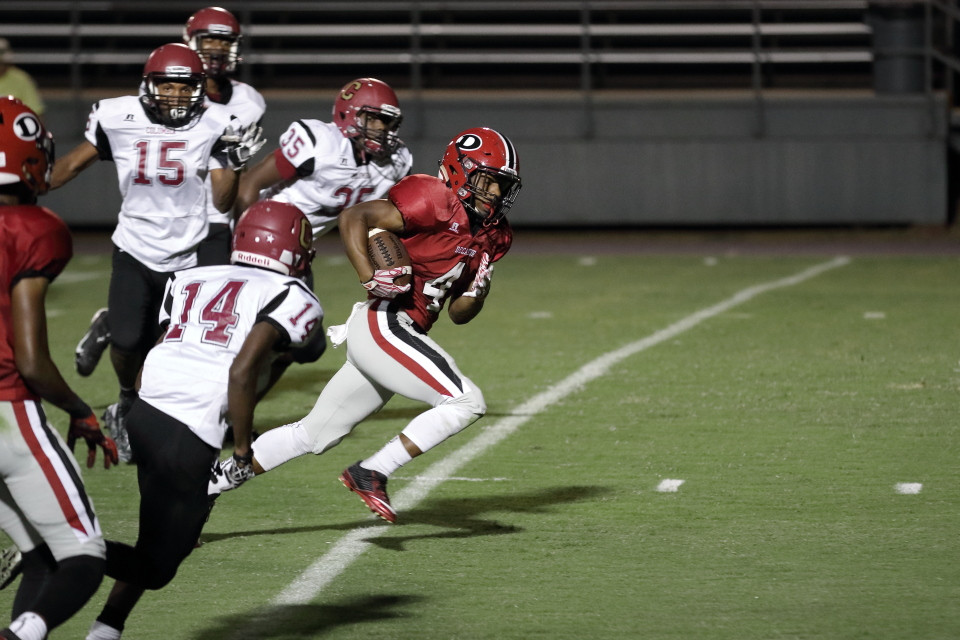 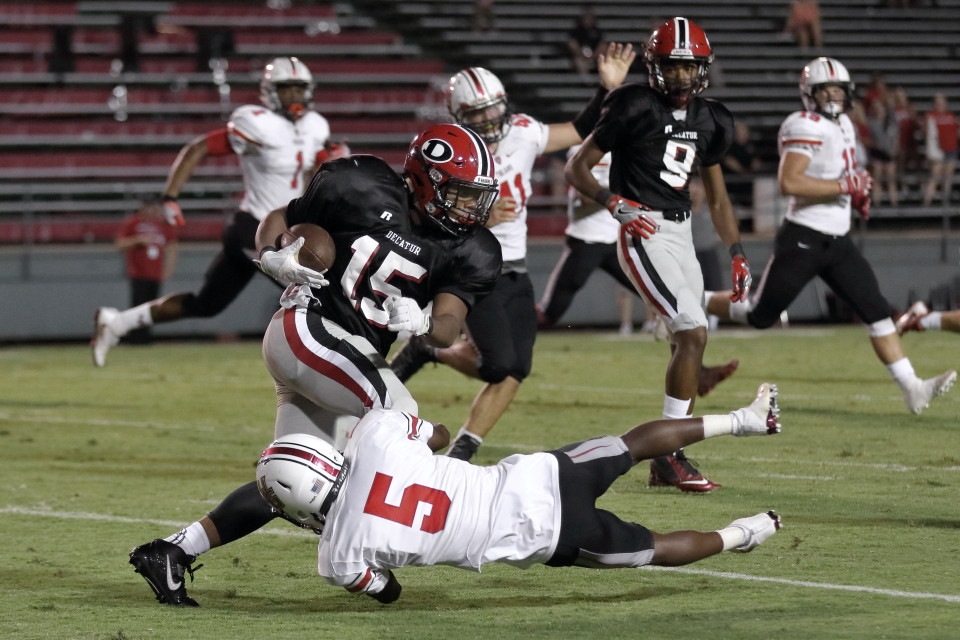 Same camera/lens/settings as above except I was closer on the sideline and the lens was at 120mm. When the motion (of the player who has just been tossed aside) is towards/away from the camera rather than laterally across the field of view you can get away with a bit more. 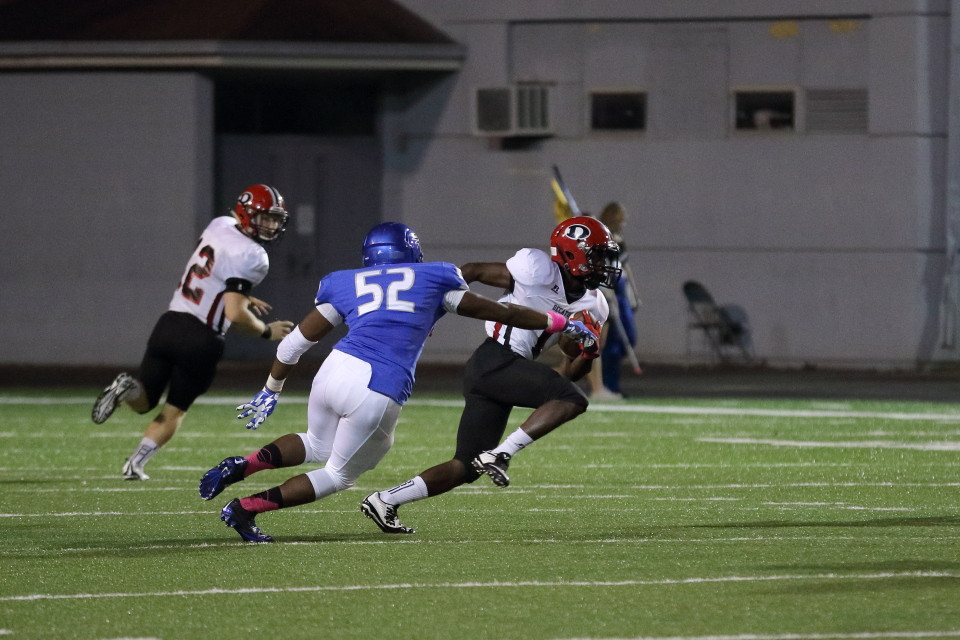 In general, if shooting American football from the sidelines we like to use a Tv of 1/1000 second or faster. At the professional or major college level there's usually enough light to shoot at 1/1500 even with artificial lighting if you're using fast lenses (300mm or 400mm f/2.8). At the medium or smaller college or high school level the fields are usually anywhere from a little to considerably dimmer than the major venues. 1/800 is usually usable unless the player is zooming by right in front of you. By 1/640 or 1/500 you're not going to get the feet and hands as sharp as the torso and (hopefully) face. If shooting basketball from the classic position of the baseline under the goal you can get by with 1/400 to 1/500 if you time your shots when players are peaking at the top of a jumping motion as they transition from going up to coming back down. If you want to freeze the ball you'll need to shoot much faster - probably around 1/1500-1/2000 or so. That's tough to do in most gyms, even with an f/2 prime and around ISO 3200-6400. At the major college and NBA level, though, the arenas are usually a couple of stops brighter than a midsize college gym or even the brightest high school gyms.

For basketball and other indoor sports, at the highest levels photographers use strobes, e.g. petapixel.com/2016/06/10/… I suspect it is also used for outdoor sports since cranking up the ISO increases the distance over which a strobe is effective, but I've not seen it discussed. – user50888

Strobes were more popular in basketball arenas until about the time the Nikon D3s and the Canon 1D X were introduced. The ability to get usable (for journalistic purposes) images at ISO 6400 and beyond has changed the way a lot of PJs shoot basketball. Basketball also seems to be one of the least restrictive sports regarding flash, especially if the flashes are mounted high up in the rafters rather than mounted on the camera at courtside.

It's worth observing that many of Neil Leifer's most iconic images are not dependent on a high shutter speed. neilleifer.com

Pretty much all of Leifer's iconic images were shot at a time when his technical options were much more limited than what is available today. Expectations regarding the use of flash during game play was more relaxed. Each pop of a disposable chemical flash bulb limited the number of times one might be used. Major sporting events usually only had a handful of credentialed media shooting them. Today even mid-level college football games typically have several dozen credentialed media on the sidelines. Major sports events have hundreds of credentialed shooters. Could we imagine what it would be like if every one of them were popping off several flashes every play?

Many of Leifer's iconic images were dependent upon flash combined with underexposing the ambient, which has the same function of freezing the action at a shorter duration than the shutter time. His image of Ali standing over Frazier in what some consider the greatest sports photo of all time, for instance, is one such image. Yet that image took hours of preparation mounting the flash in the rafters before the fight to get one image on color slide film while others where shooting up to several frames per second with grainy high speed B&W film. The expectation from modern sports photographers is to get considerably more than one or even a handful of images from an event they cover.

Even David Hobby's first tip is to "Avoid flash for as long as you can!" When the person known worldwide as "The Strobist" says to avoid flash as long as possible, it ought to be fairly obvious flash is not the ideal way to shoot sports.

He also acknowledges the possibility exists that either coach can request the referee require you to stop using flash. They usually ask nice, but if you refuse and keep popping the flash, their next step is usually to tell the police providing stadium security to escort you out of the facility. At the high school level in my home state and many others it is officially forbidden, yet rarely enforced. The officiating crew has the final say in the matter. If a coach requests that it be enforced, though, it will be enforced. Most major American football sanctioning bodies (NFL, NCAA and associated conferences, etc.) currently do not usually allow flash use during play by credentialed media. They do allow it during times when the clock is not moving.

Among other sports some allow and some don't. Gymnastics are the most restrictive (absolutely not at any level), followed very closely by volleyball (some sanctioning bodies 'officially' allow it, but leave it to the discretion of the head official - who pretty much unilaterally prohibit it). Basketball seems to be one of the least restrictive, especially if the flashes are mounted high up in the stands or rafters rather than mounted on the camera or otherwise down low at courtside.

For sports, the simple rules are: to stop action, lean towards the higher shutter speeds. There is a trade with depth of field, so there is a judgement call, depending upon how you want your visual field to be rendered.

To show action, slow the speed. If it's just the blur of a passing runner, than try slower speeds down to what you can stabilize the camera for. 1/30 is generally the slowest I can hand hold for.

By example, to get the impact of a ball on a bat, a shutter of 1/2000 is probably a good start. The deformation of the ball is visible, and not blurred completely, but the motion of the bat will be stopped, and the grain of the wood will be clear.

To get a basketball dunk, you might use 1/500 or 1/750 and you will get some blur on the fingers and ball, but the motion of the body and the face will be minimal, yielding a clear image.

Framing, and how close you are to the action in also a factor. The actual math boils down to the motion across a subtended angle, and the resolution of the image. So another rule is closer, then faster. This means higher shutter speeds for telephoto shots, and slower speeds for more normal angle shots.

The shutter speed desired depends on the sport and on the pictorial effect the photographer strives to achieve. As usual, it depends.

Sometimes, you don't want to freeze the action to preserve the illusion of motion. Those are the times you put aside the electronic flash and fast shutter speeds and use other methods to capture the moment.

When shooting action across the field of view, a photographer can use a slow shutter speed while panning the camera to blur the background and maintain the detail in the subject.

When shooting action gaining or receding from the POV, zooming can enhance the effect. When shooting sprinters, the face and torso can be detailed while framed with the radiant light trails from the zoom with the arms and legs are blurred.

When shooting any action that naturally reverses direction or reaches a limit, the concept is referred to as "peak of action" or "peak action." The photographer releases the shutter at that point to preserve the feeling of the moment. The photos of the impact of a blow during a boxing match reveal such successful attempts.

Not the answer you're looking for? Browse other questions tagged shutter-speed sports action or ask your own question.

-2
d7200 sports settings
21
How to take a picture of a group with flash so that everyone's face is lit evenly?
3
Night-time football game under field lights
3
Which Canon lens would be better to capture high school wrestling, 55-250 STM or 70-300 IS II USM?
2
Sports Photography
0
Nikon D300s, Tamron 70-200 2.8 lens, Suggestions for low light settings for Gymnastics and HS soccer,
0
Which mirrorless configuration would be faster in low light (ISO 3200)?
0
Will a full frame camera reduce noise vs. my Canon T7i for high school wrestling and football?
1
What settings to use for indoor sports (water polo) with Nikon D90?