How did my negatives end up upside down and backwards?

I am scanning 35mm negatives of old family photos and came across a roll I can't make sense of. The images are all printed upside down. What's more confusing, though, is that they appear in reverse order on the roll. The last photo taken appears at frame 0, and the first photo is at the end of the roll at frame 25. How could this have happened? Is there any way the film could have been loaded into the camera incorrectly, or could this be due to a manufacturing error?

ETA: Here is a picture of a couple of frames from this roll of film. You can see that the images are upside down, but the frame numbers appear normal. The image in frame 2 was taken before the image in frame 1.

Some models of 35mm film cameras, upon loading advance all the film from the cassette on to a take-up spool. For these models, the first picture is taken on the end of roll, likely about frame # 36 or # 24. As you take pictures, the film advance actually rewinds the film back into the cassette. This scheme was used on a few models, it protected exposed film from accidental damage should the camera back be accidently opened.

The other stuff, upside down or even inverted left for right might be due to the film inserted upside down in the scanner.

Lots of strange stuff in this business!

Addendum: As a veteran of the photofinishing business I think I have seen it all. The one that was most weird. The film was loaded so the base side faced the lens. The photographer over-exposed so heavily, printable images were exposed through the base side. The images were inverted left to right.

You say in a comment to another answer that the camera used could not have been a pre-loaded disposable compact. But that is how the film was loaded in more than a few varieties of them. The film was transported through them 'upside down' from left to right and the lightproof cassette was used as the takeup spool. The cassette was also upside down compared to more conventional usage so that they didn't need to be 'mirror image' versions of the very common film cassette.

In effect, these types of disposable cameras were simply traditional cameras that were flipped 180° and then the controls were moved to the 'top' of the 'upside down camera.' The film was then wound onto the takeup spool without exposing it and then wound back into the cassette as it was shot.

The scheme mentioned in the first paragraph of this answer was used in more than just a few models at the end of the film era. All of the EOS film camera bodies beginning in 1987 did it. So did Konica's models that had built-in film winder motors that began appearing in the early 1980s. Almost all 35mm disposable cameras were (and still are) preloaded with the film out of the cassette. Pretty much any of the electronic 35mm compacts with motorized film advance that came out in the late 1980s and later did it as well. Prior to the early 1980s it was rare, but after it first appeared a LOT of camera makers adopted it.

One could take any SLR or compact 35mm "automatic" that was sold during the late 1980s or 1990s that 'preloaded' the film onto the takeup spool and then wound the film back into the cassette as it was shot and get the same pictures. You just need to hold the camera upside down as you shoot the roll.

Another possibility is that the pictures were shot using a "super secret spy lens" with a 45° angled mirror. You know, the kind you used to see advertised in comic books to take pictures of unsuspecting people like bikini clad young ladies at the beach? 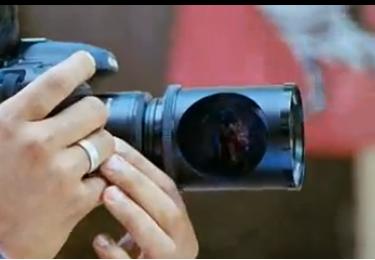 When the "spy lens" is attached to the front of the camera's actual lens via the filter threads there's a hole in the side of the add-on 'barrel' that admits light which is then reflected by the mirror into the actual lens. There's a fake 'lens' on the front of the "spy lens" so it looks like you're pointing the camera in one direction while you're actually taking a picture of something 90° to the left or right of the camera.

By using a camera with such a "spy lens" attached and the hole rotated to point towards the top or bottom of the camera and then pointing the camera straight up in the air the images would be 'upside down' and reversed.

It's possible but rather unlikely that the film was loaded incorrectly into a 35mm camera. I can't think of any 35mm camera where it would be possible to load a roll of 35mm film upside-down due to camera bodies being designed to seat the roll of film and accommodate the flange where the film exits the film. Loading the film upside down would make it impossible to close the camera and should raise immediate doubt whether the camera was being loaded properly.

However, it is possible that the roll of film was used with an adapter in some other non-35mm system, such as a 645 medium format camera. Depending on the foreign system in use, it may be necessary to wind all of the 35mm film onto a secondary spool and then shoot backwards along the orientation of the film. In this scenario, it is possible that a 35mm film canister could be loaded upside down if the uptake spindles don't care about alignment of the grooves in the spindle of the 35mm film canister, or the entire assembly could be reversible as well (also possible in any system supporting a film back that could be rotated 90 degrees to either side of vertical). If your negatives have image exposure out into the sprocket hole margin, then it's quite likely they were shot this way.

Another possibility is that you're not handling 35mm film, but APS film. APS cameras spool all of the film on the camera into the body, up to the last available unexposed frame. This allowed APS camera users the possibility of shooting as little as a single frame and switching out the roll for a different roll (usually to change ISO).

Finally, if it is the orientation of prints that is off, and they were made with negatives spooled properly, then whomever printed that series of prints just had the negatives upside down or oriented improperly. In any case, if you have the negatives, you can rescan them or have them reprinted with the correct orientation. The only likely additional concern (besides the original photographer's technique) is a small loss of sharpness and contrast in the captured images caused by shooting through the wrong side of the base.

PS. If the negatives came from a self-contained unit, like a point-and-shoot disposable camera, it is possible there could have been a bad batch where the film was spooled upside down and backwards. I don't know anyone who has encountered this, but of course it isn't impossible. Given that many of these cameras were used for 4x6 prints, it's possible that anyone who used such a camera might not have noticed nor made any noise about the result.

This must be a mistake at the factory. I'm in the middle of scanning a bunch of film, all from the same camera. Everything has been normal up until now, but I just encountered a few rolls with the exact problem you describe - the higher frames are the earliest chronologically. And the frames are "upside down". All this compared to film that was shot on the same normal SLR (pentax). AIUI the numbers are printed on the film before you buy it, so this must be an error at the factory where the film was rolled onto the spool backward.

I know it's tempting to blame a weird camera, but I can confirm the problem is with the film/factory.

In the factory, for some reason (they fell on the floor? they were looked at visually but put back upside down?) the roll (with its frames 1 to 25) was put in place in the wrong order, so that now the frame 25 is the first to appear. When you use that roll, you end up with what you describe: images look reversed, and start on frame 25 and end up on frame 1.

Ie, the roll was with "the other side" facing the lens, and thus starts on the high numbers and ends on the low numbers, and the image, once you put the number the correct way, look reversed.

Are you completely sure that all your films were taken with the same camera?

For photography it is perfectly normal that all images are upside down on the film. This is how the light passes through the lens. On my old Canon EOS 100 I had to put in the film on the right side and it was moved to the left after exposure resulting in the very same situation as you saw in the attached image. The camera had a eletrical winder that moved the film after each image.

I remember an old manual camera where the film was put in on the left side and moved to the right after exposure. Moving the film was done by a lever that had to be pulled after each image. The lever moved the film and "armed" the shutter again.

Depending on the camera model the film would end up either with the numbers upside down just as the taken pictures of straight up while the images are still upside down.

I would assume that you simply have films taken with different cameras.

I once scanned some films for a friend that were exposed using a camera as mentioned in the answer from Alan Marcus. While the order of the images taken is from high numbers to low numbers, this does not affect being upside down or not.

I can't believe the answers that I'm reading on these comments. Here's the correct answer. when your eyes look at someone they see them upside down just like the camera does. The brain then goes through a process that will change that to showing them right side up it has nothing to do with a camera it has to do with the way that our eyes see people which is basically upside down.

Not the answer you're looking for? Browse other questions tagged 35mm negative-film or ask your own question.

15
How to store and preserve film negatives and slides?
5
Why am I getting vertical black bands across my negatives and how can I prevent this?
0
What could cause these tonal artifacts on each frame of this panorama?
2
Got back my film - Nikon FM2 missing shots, blue marks, what happened?
8
Why did my developed photos come back blue outdoors (and fine indoors)?
15
Why have all negatives been exposed to one frame?
2
What is causing white stains on scanned negative? Is there a way to fix this?
2
Pinholes in 35 mm slides
2
Will hardener help prevent emulsion wash-off during development, 35mm B&W (ADOX CHS 25)