I was shooting a pano this morning and many of the images had the lights with streaks to the right. Always the right. I was panning to the right, manually rotating the camera, releasing it and pressing a remote release with a one second delay. The lights in the images often appeared as: O-----

I am guessing it is not the camera itself (Nikon D810), so it has to be the tripod or its head. The head is a Vanguard SBH 300 on Vanguard Alta Pro 263AT legs. It's pretty solid and stable. If it were ground shake, I'd expect the light line ("-----") to wiggle and go in different directions. It is perfectly straight and always to the right. I was always turning to the right, too. Next time, I'll go in both directions.

But what could cause it? (No, I didn't touch the tripod. That's why I used a remote release.) 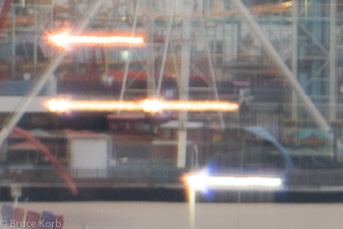 I found the source of the problem: my hand

When taking the images, three distinct sounds are made: the clunk of the mirror up, the click of the front curtain opening and the "tic-schlup" of the rear curtain closing and the mirror dropping down. I had (incorrectly?) interpreted the "tic" as the curtain closing. It was actually within the "sch" part of the sound and that happened enough after the "tic" that I was able to start moving the camera around before the curtain closed. I'll need to wait for that "lup" before starting to move the camera. That will add tens of milli-seconds to my pano capture time. I didn't expect this to be the answer. :-D

Not the answer you're looking for? Browse other questions tagged tripod camera-shake or ask your own question.

8
Tripod that is mobile yet sturdy and light
13
How can I prevent blurred images when using a tripod?
5
What tripod leg extensions systems are there?
2
When and where do you need to use a tripod?
7
At what shutter speed threshold does a tripod start to matter?
0
Benro Tripod: Sticky Middle Column
2
How can I remove the ballhead from my Manfrotto tripod?
3
How to extend the camera horizontally when shooting from a balcony on a tripod?