Why is there "single" in the term DSLR (Digital Single Lens Reflex)?

I have been reading about lenses and I was curious to know why there is a term "single" in the abbreviation DSLR?

As far as I have read, the modern DSLRs (for example, the Nikon 3200) come equipped with multiple lenses and there is an effective focal length of the ensemble of lenses. So, what is the significance of the term single the term DSLR?

Maybe I am missing the basics?

Single lens means that there is only one lens attached to the camera at once. This is to distinguish it from a twin-lens reflex camera, which has two lenses - one used for the viewfinder and one used for actually taking the photo.

A picture is worth a thousand words, here. This is a Twin Lens Reflex camera: 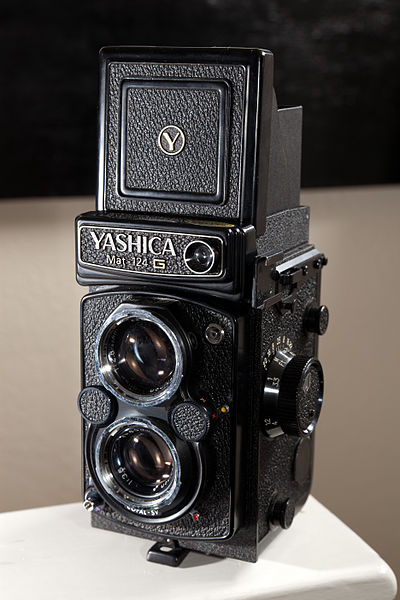 This was a big innovation, because previously, the photographer would focus, and then carefully replace the viewfinder's ground-glass screen with the recording media (glass plate or film-holder or whatever). You could have a twin-lens design which doesn't use a mirror, but the mirror allows for a more convenient viewfinder location and a much more compact design.

If you're used to SLR cameras, it's easy to assume that "reflex" means "the complicated thing where the mirror dodges out of the path of the film right at the last minute", but this isn't it. It actually refers to the mirror itself; from Merriam-Webster, this is a different use of the word:

b : a mirrored image

c : a copy exact in essential or peculiar features

So, Single Lens Reflex shares the "reflex" part, but has a Single Lens in contrast to Twin — with this design mirror moves out of the way, allowing the same lens to share viewing and taking duties. There are advantages and disadvantages: moving the mirror is complicated, can shake the camera, and there's a blackout right as the photo is taken. SLR cameras were actually invented very early on, but didn't really come to dominate until technology had advanced enough to minimize these disadvantages,

"Single lens" can also apply to other camera types, like those without a reflex mirror. While terms like "mirrorless" are more common, Canon refers to the M series as single-lens non-reflex — one (interchangeable) lens, no mirror.

There is also sometimes confusion about what exactly a "single lens" is ­— isn't that a single piece of glass, like a magnifying glass? Not necessarily! There are three types of things we call "lenses": simple lenses, compound lenses, and complex lenses.

The more important letter in DSLR is the R, which stands for reflex. What differentiates reflex cameras from others is that the image is made to appear on a screen that's positioned in a way that's optically-similar to the film plane for composition and focusing. (View cameras work the same way, but the screen is the film plane.)

Early designs had two lenses*, one that led directly to the shutter and film plane and a second that led to the focusing screen at the top of the camera by way of a mirror. The mirror served to flip the image the right way (vertically) and also avoided having to make the camera a lot bigger. These were called twin-lens reflex cameras, and the mirror is what makes it a reflex camera.

Once the industry figured out how to manufacture a mirror that could swing up out of the way during exposure, the second lens could be eliminated, taking with it the parallax and extra weight and bulk that TLRs required. With one lens left, the viewfinder sees almost exactly what the film (or digital sensor) does, and those models become single-lens reflex cameras.

*Lens here means something in the single or compound configuration, or in general, something with glass in it meant to bend light.

To me, the problem is with the word "lens"--I think it would be much clearer if it said "optical path" as it entails more than just light-bending elements. A single lens camera is one where you are looking through the same optical path as will be used to actually take the picture.

Thus you see the effects of the focus, of any filters you might have attached (good luck using a polarizing filter on that twin lens camera as the angle matters!) and possibly the effect of stepping the lens down and you'll see if something is wrong with the image (I've taken a few pictures of my finger with a little point & shoot with a separate viewfinder) and things like vignetting from putting too many filters on.

Twin-Lens Reflex cameras aren't very common now, but they used to be relatively common -- especially in medium format photography. There would be one lens that would project an image onto a focusing screen and a second lens (normally below the viewing lens) to project an image to the film. The two lenses were on the same board which was moved to focus the lenses, so when you focused the top lens you were also focusing the bottom lens. This simplified the mechanical construction of the camera, as you didn't have to have a mirror to pull out of the way to take a picture.

Obviously parallax was an issue. For tripod use there used to be a device called a "paramender" (maybe a brand name?) that went between the camera and tripod. After composing and focusing you would flip a lever that raised the camera so the taking lens was in the exact position of the viewing lens.

This type of camera used to be/is popular for medium format street photography because you can compose and focus without holding the camera up to your eye. There's also no mirror-flip delay as in an SLR so less "time parallax", making TLRs better for decisive moment type photography than SLRs.

Google image search "rolleiflex" to see an iconic example of this type of camera. Mamiya made versions that had interchangeable lenses.

English language is particularly confusing regarding optical assemblies, especially in the context of photography...

"Lens" indeed refers to the whole group of lenses (interchangeable or not) attached to the camera ... in microscopy and astronomy, this would be more formally called an "objective" (describing the sum of glass parts that AREN'T part of the eyepiece); the same term is used for camera lenses in some other languages (you'd say "das Objektiv" or "die Optik" in German, "Linse" is considered informal and incorrect, unless used for an element, see below). Unfortunately, "objective" is a confusing term again in English (potentially meaning an "intent, goal", just as "die Linse" can be easily misunderstood as "lentil" or "contact lens" in German).

The technical term in photography for a single massive (in the formal meaning) piece of glass is (lens) element. If it is compounded of multiple parts cemented together, each of these parts is considered an element, the whole is called a group. Hence the common way of describing a lens as being constructed eg of 7 elements in 4 groups.

As mentioned, there are so called twin-lens reflex cameras (which you could argue are just very elaborate rangefinder cameras) - the big boxes seen on a lot of Photoshop packaging (eg PSE11) and in old movies. Still extant but not very commonly used.

SLR - Single lens reflex (the pentaprism which is a single unit) DSLR - DIGITAL SINGLE LENS REFLEX means a digital sensor instead of film.

SLR has nothing to do with the lenses attached in front of the camera. It's only about viewfinder and mirror used to select the light into the pentaprism..

Not the answer you're looking for? Browse other questions tagged dslr terminology slr camera-design or ask your own question.

9
Why the need for SLR in digital cameras?
1
What are some of the implications of using a medium-format lens on a DSLR?
13
Is there a DSLR fixed lens camera?
13
Why are mirrorless cameras much slower than DSLRs?
9
Mirrorless camera vs. mid-range DSLR — how to decide?
4
How can I explain focal length to someone who isn't into photography?
0
What Happened to my DSLR?
4
Why my DSLR is not as sharp as my smart phone?
2
DSLR Lenses Closest to a Point and Shoot
2
What can I expect with stacked lenses for extreme macro photography?