Lens Fungus - how to prevent it while actively using the lens in humid environment and remove it if you already have it?

This is a popular question throughout this site as well as the internet in general. However the same answers which address storage are used for usage. In this question I am specifically focusing on the active usage. That is, how do you avoid "catching" fungus while actively shooting in a warm humid environment? And if you do catch it, how do you remove it preventing re-occurrence?

The two most prevalent answers involve: Silica Gel and UV/Sunlight. Both of these I would like to discard as not applicable for active usage, that is, when you're constantly taking the camera out of the bag and placing it back.

fungicidal pellets, ammonia, borax or some other chemicals. However their safety, usage, dosage, or combination are not clear.

This I haven't seen discussed much anywhere at all actually. From my personal experience, however, I can confirm that fungi are not omnivorous and do prefer certain plastics and materials. However I can't confirm composition, only that some are more susceptible than others and presumably that some are immune. Goes without saying that if you put your camera in a bag that has developed fungus there's very high likelihood of it spreading to your gear.

Some background about my particular case

Fungus is relatively easy to "clean" with just light soap and a cloth. I even added a very light ammonia to the mix (too light perhaps?). I've done it, and it was gone for a year. However, it returned the next year (now), coinciding with the cycles of tropical environment of the country where I'm presently staying.

Initially all my 3 lenses and even the camera sensor were affected. The sensor was completely covered when I noticed the problem with the lenses. (The humidity at that particular time seemed most severe.) Although the sensor is still clean now, all 3 lenses got the fungus like a clock at the same time again. I usually pay attention to equipment, so I would estimate that it went from unnoticeable to what you see in the image I attached, in about a week or less.

So a real solution would involve something that keeps it away, or kills it permanently, when you happen to catch it. So if you do get it again, it comes from a different source. Clearly in my case I didn't kill it thoroughly. Taking electronic lenses apart is very hard, with a chance of damaging the fragile ribbon cables inside, so goes without saying - best minimized.

In this section I describe in detail why Silica Gel and UV/Sunlight are not applicable to this particular question. You can skip it, as long as you keep it in mind.

Silica Gel as a preventive measure

Silica Gel (and similar moisture absorbing chemicals) are very effective when it comes to storage of photo gear. For camera shops or people who wish to store their gear it is a perfect solution. However, in this question I address a situation where a person is actively shooting in a warm, humid environment and for such scenario silica gel is completely useless. The reason being, as you frequently open your camera bag the gel is absorbing the humidity around you rather than from the camera.

No matter how long and what kind of light you shine at the fungus infected lens, fungus will not fall off. It will just stay there, degrading the image quality. No matter the duration or the type of light you use, there's no guarantee that some spores are left unexposed. And since you leave fungus remain on the lens it can not be distinguished from dead or living. So this is very risky procedure. However, I should mention, there are some people which will chose to leave the fungus on their lens in order to avoid servicing or disassembling it (or for whichever other reasons). For the sake of this question, I am not addressing that scenario, and not considering it a solution simply because it doesn't solve the problem. Visually, fungus is still there. Is it alive? It's unknown. However, for storage-related questions, it is a good practice to occasionally take the lens out of storage and dry it in ventilated area exposing it to sunlight. Unless if you're in humid environment. Then it's better to just take it out of storage and swap silica gels with fresh ones.

Caution: Exposure to direct sunlight has a very high chance of damaging the electronics inside the lens. Also, as the sun moves, an angle could shift causing a concentrated beam which could possibly damage something as well.

This is one of the affected lens elements from inside my FujiFilm lens: 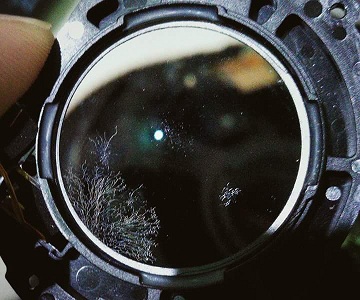 So to recap, what is a definitive and comprehensive answer to the problem of fungus appearing on a lens while actively using it in a humid environment and how to remove it if you already have it?

The trick is to keep drying it out in the oven - its water adsorption is reversible.

You can get gel with an indicator - orange, it's still working; green, it's 'full'.

If you're in the field, swap it out frequently & keep checking the colours. Use sealed lens boxes [optimally clear or frosted to allow light in, though perhaps not too much direct sunlight] & keep spare gel packs in a separate container. Use the 'overkill method'... have far more fresh gel than you will ever need.

It's dirt-cheap compared to lenses.

The answer to your question, as written, is that there is no solution.

You've specifically eliminated the two most effective ways for suppressing the growth of fungus: lack of dust and humidity (because they feed fungi) and UV light (because it prevents the spores from flourishing). Those are the most effective ways of preventing the fungus spores that are in the air everywhere from growing and reproducing.

Anything else requires opening up and disassembling the lens on a regular basis to clean every little part - which your question seems to exclude (It seems to me you wish to do it once and then never again). I guess if you had purely mechanical lenses you could completely immerse them in formaldehyde or something, but that might have a negative effect on the lens coatings.

Ok this may sound weird.. there's the whole idea of if you drop your phone in the sink (or in reality toilet) people are told to put their phone in rice and leave it. I thought hmm maybe this might work for you so thought I'd do some research on if this method works for phones to begin with.

Well. You're in luck. The origin of this story/method dates back from 1946.. in Popular Photography magazine and was about storing camera gear in rice to protected the gear from fungus in the humidity as an alternative to silica gel. It's quite a long article but does talk about equipment in the tropics.

Not the answer you're looking for? Browse other questions tagged lens cleaning maintenance fungus humidity or ask your own question.

45
Why does fungus form in lenses, and how to get rid of it?

45
Why does fungus form in lenses, and how to get rid of it?
5
Will keeping the lens on-camera help protect from dust and fungus?
1
What is the best way to preseve old equipment without fungus and moisture?
4
How to set up a safe environment to clean inside an old lens?
1
Does the lens I just bought have a fungus?
0
What is the little “haze” on my lens?
3
Is there a way to remove fungus without dismantling the lens?
0
Can I use a weathersealed lens on a fungus-infected DSLR?
1
Lens getting fungus again and again