Recently I take a shot of a big tree and encountered some issues with the image resolution. Here is the image after postprocessing: 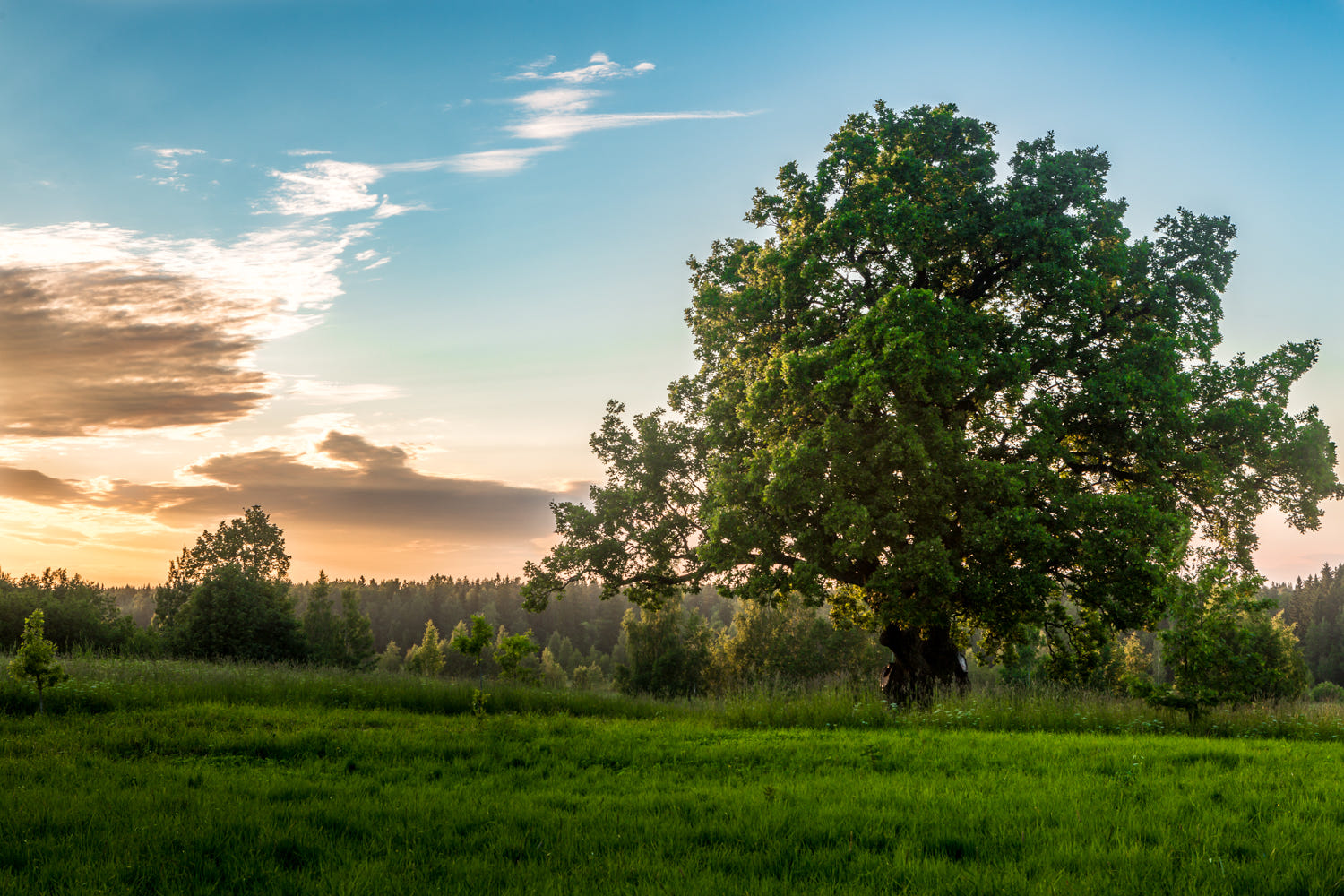 To make scale clear (how tall the tree is and how far I stand from it when took a shot), take a look at two branches has been cut at the bottom of the tree. The one at the left is about 1.6m above the ground.

I have received some critique about the picture - the leafs of the tree looks a bit messy, it is not clear enough, not, let's say, razor sharp.

And this is actually my question - why it is not sharp? I have the following theories on that:

In case this helps - here is the full-size image: https://yadi.sk/i/xpcxHccm3KtkjB (in web interface there, click "Скачать" button in case UI is in Russian).

At 1/15 second you are squarely in the middle of the shutter speed range that is most affected by mirror movement. A faster shutter time will be completed before the vibrations reach the parts that matter (sensor and lens). A longer shutter time allows for exposure to continue after the vibrations have ceased. A few controlled tests I have seen put the range for mirror movement induced blur from about 1/160 second down to about 1 second. The greatest effect is seen from between 1/80 second to about 1/3 second. 1/15 is exactly in between these. It is five times shorter than 1/3 second and five times longer than 1/80 second.

1/15 second is also too slow for anything outdoors that can move in the breeze. Anything faster than about 1/200 second should eliminate any blur due to vibrations from the mirror movement and would reduce the movements of the leaves due to wind by a factor of about 13.

F/11 is already just beyond the diffraction limited aperture (DLA) of f/10.1 for the EOS 5D Mark III. You won't see much of the effects of diffraction at f/11, even when pixel peeping, but you will see a little bit. Certain types of sharpening tend to exacerbate diffraction. Open up the aperture to f/8 or even f/5.6 and you should still have enough depth of field for what you are trying to do. This will also help with using a shorter shutter time without raising the ISO too much. ISO 400, F/5.6, and 1/200 second would be my starting point. With most Canon DSLRs, including the 5D Mark III, you probably want to avoid the '+1/3 stop' ISO settings (125, 250, 500, 1000, etc.).

Just because your camera is on a tripod does not mean it is motionless. Wind can and often does have an effect on tripod stability. A strap left attached to the camera can act like a sail when the wind is blowing, making the problem even worse. Allowing everything to 'settle down' after touching the camera or tripod can also take several seconds. The lighter the tripod, the longer it takes.

Although it is hard to say for certain due to effects of the apparent camera motion/vibration, it appears to me that the point of sharpest focus is a bit beyond the large tree.

Post processing also plays a part. Sometimes a little bit of something does better than a lot of the same thing. Oversaturation, even when limited to only a single color channel, can cause things that were properly focused to look blurry. Too much sharpening can also make slightly out of focus areas look even blurrier. Increasing 'local contrast' can do the same thing. The presence of a bit of 'halo effect' where one of the tree's branches is in front of a darker cloud indicates you may have pushed the 'clarity' slider a bit too far.

I have an EF 24-70mm f/2.8 L. It is a very good lens. It is not perfect. But most of the imperfections are most evident when the lens is used wide open. At f/8 or so I doubt you'll see much, if any, difference between a properly aligned original version of the lens and the EF 24-70mm f/2.8 L II.

The unique 'backwards zoom' design of the original Canon 24-70mm f/2.8 and where this places the optical adjustment points makes it highly sensitive to bumps and other minor impacts to the front of the lens barrel, especially when the front inner barrel is extended. Roger Cicala has written a few blog articles that discuss this particular lens. If you read them, though, please be sure to read them in their entirety and pay attention when he says things such as,

And before I go further, please raise your right hand and repeat after me: “I do solemnly swear not to be an obnoxious fanboy and quote this article out of context for Canon-bashing purposes.” Because trust me on this: Canon faired very, very well in our testing, with only this one lens being an outlier. Other brands definitely are not better. This one got to be the example simply because we started testing Canon lenses first, and because we have more copies of them.

I’m going to use a Canon 24-70mm f/2.8L lens as an example, mostly because it’s a lens we know well and partly because adjusting it is pretty straightforward and the adjustments are easy to photograph. Not all lenses are as easy to work on. The copy we’re using for this demonstration has a fairly typical story: it was dropped, causing the filter ring to bend.

Optically Adjusting a Lens
The Limits of Variation

One of the nice things about the design of this lens is that the hood is attached to the main barrel and protects the inner barrel from impacts. Since the lens is most extended at the shortest focal length and most retracted at the longest focal length the hood also provides good shielding from off axis light throughout the zoom range. Because of the way the hood protects the front group from impacts, I never take my 24-70 f/2.8 out into 'the wild' without the hood attached due to the way that even relatively minor impacts to the front barrel can knock the front group out of proper alignment.

Regarding your lens there are a couple of points to note :

The shutter speed is way too slow.

It's not just an issue of shake blue, it's that at such a slow speed you can get motion blur a well. Just a little breeze will do that and you're photographing leaves which move in breezes.

That image looks over-processed to me.

You've a lot of 100% saturation levels (particularly green areas) and that will remove detail. As you have the RAW I'd suggest trying again with more muted tones until you get what you're looking for.

Restrain yourself with saturation and vibrance until you have detail enhancement nailed.

Local contrast enhancement is, in my experience, something of a blunt instrument. You really need to try a lot of different sharpening tools and apply them selectively to get the most out of an image like this.

Experiment with different settings. The default settings for sharpening tools are rarely suited to this kind of low level detail enhancement.

Even with a tripod, 1/15 is too slow for a situation where a small breeze will move things. That said, there's no magic answer here. It's probably a combination of all the factors you suggested.

Further, you haven't mentioned what format you stored the original image in (RAW vs. lo-res jpg vs hi-res jpg) nor what "post-processing" you did. Any number of algos applied to the image could have reduced the edge contrast.

Not the answer you're looking for? Browse other questions tagged resolution landscape or ask your own question.

10
Blown out blue/red light making photos look out of focus
26
Is it really better to shoot at full-stop ISOs?
7
Unable to get sharp landscape picture
7
Does sensor size impact the diffraction limit of a lens?
1
What options are there for travel walkabout lenses for Canon 5D Mark III?

2
Can I increase the resolution of a six-megapixel photo to print on a large canvas?
3
Can I use a large aperture of f/2.8 while shooting landscape photography?
0
Files from my camera are very large: does this present any problem?
0
Photo resolution for a large canvas
0
Why are my pictures blurry even though a DOF calculator shows everything should be in focus?
0
Why does a more expensive camera have fewer pixels?
3
Techniques for shooting large format from a plane?
1
Calculate original resolution an image was taken at from EXIF data?
0
Why are my photo's not so sharp even when using a tripod?