In the John Wayne movie Rooster Cogburn (1975), there is a dramatic focus fall off at least 10% of the vertical height at both the top and bottom of the lens. Why does this happen? 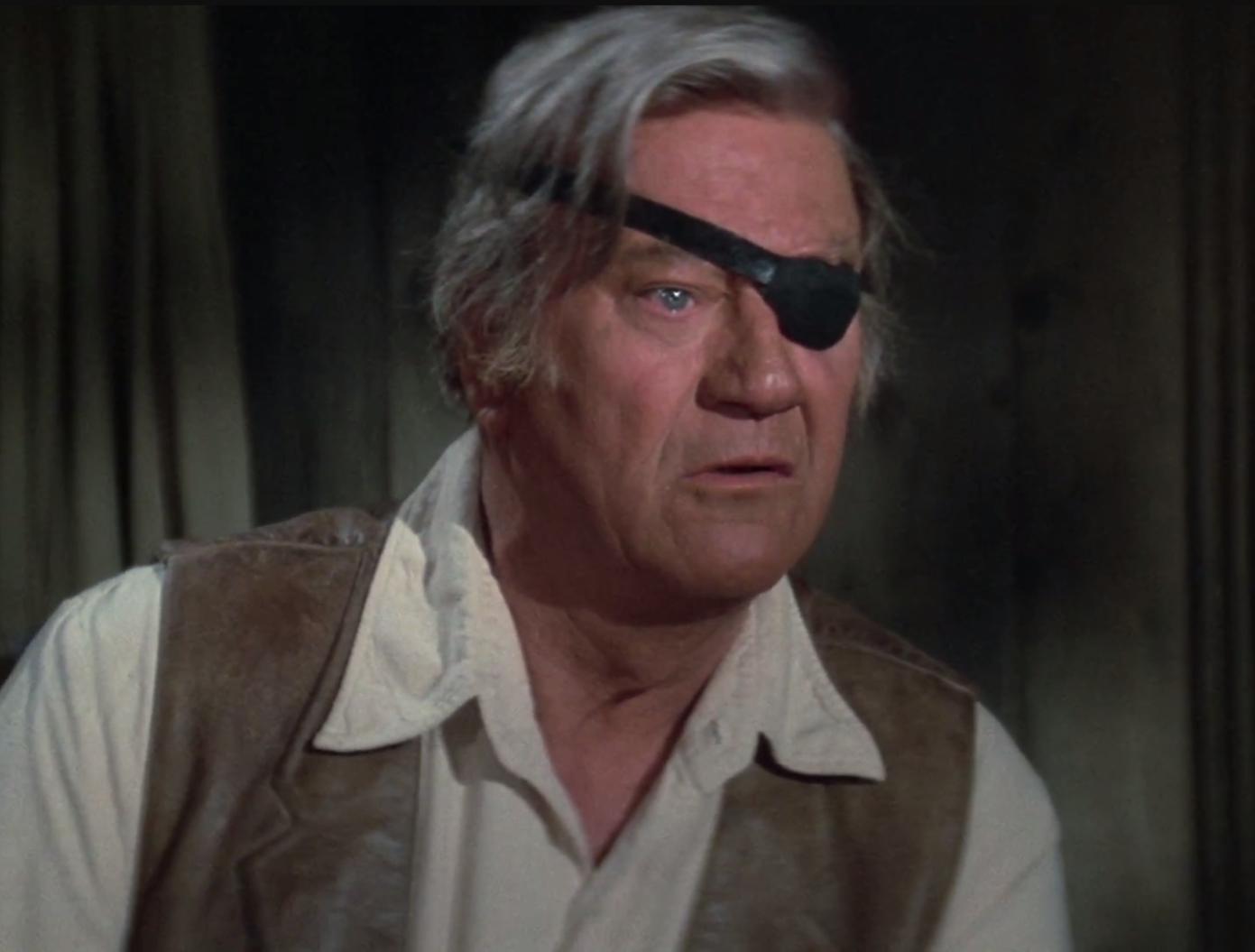 This is most likely caused by field curvature. Whether it was introduced when the footage was shot or later when the film was digitized or even when converted to the still image above is impossible to say from only looking at the sample image above.

At the time Rooster Cogburn was filmed plenty of lenses did not correct very much for field curvature. This might particularly be the case for lenses selected by a cinematographer for use to film mostly outdoors in daylight the way most westerns were shot.

In the 1970s budget considerations were often tighter for westerns than other types of films. The marquee value of the actors, rather than pure cinemagraphic quality, drove the box office performance of a genre that was fast falling out of favor with the moviegoing public. With the fairly narrow apertures used in daylight shooting conditions the effects of field curvature could be largely ignored. The photo above, however, was likely a single 24x16mm frame from footage shot in a much dimmer environment to simulate an indoor scene and the aperture would have probably been opened up more than would normally have been the case for most of the other scenes in the film.

Although as of late field curvature seems to most photographers to have become an undesired aberration to be avoided at all costs when considering a new lens, there are times when it is a desired quality for getting a shot to look a certain way. For the photographers who are in the know about what such a lens can do for certain types of shots field curvature isn't necessarily a problem at all.

In the case of the example image in the question, the field curvature appears to have an oval, rather than circular shape. This would indicate that the lens used to film the scene and any lenses used to convert the film to a later format were anamorphic lenses.

Not the answer you're looking for? Browse other questions tagged lens focus optics or ask your own question.

27
What is the shape of the focal plane?
9
What is the advantage of a lens with a curved focal plane?
6
Why is anamorphic bokeh oval shaped?
0
Focus of lens dropoff from center to ends
0
What lens is ideal for graduation and family pictures?

4
Why does my Canon 1000D focus only on the bottom part of an image?
3
Does lens focus affect the appearance of sensor dust?
3
Why is it harder to focus using LiveView?
1
Why does this lens lose focus when you zoom in but not when you zoom out?
3
Why are my enlarged darkroom prints out of focus on edges?
0
Focus Mode issue with the Nikon 7200
3
Would adding an external lens allow one area outside the focal plane to be in focus?