How can I optimise and improve my auto focus?

I have a D3100, and have a question about back button focusing.

Yesterday I went out with my son to shoot, and I found a lot of my pictures had focus on the wrong part of the image. More than normal. Luckily I took a lot and some were great.

I have to push the shutter half way to 'wake up' the camera, and then the back button focuses again

I made a mistake in that regard by assuming the camera was in focus when hitting the back button did nothing.

Is this expected? Nothing I have read about back button focusing has mentioned this as required.

The question has two separate parts: How to get the AE-L/AF-L button to initiate AF and what causes the camera to focus on things that aren't what you want it to focus on. The first is fairly simple. The second could have a book written about it.

If your D3100 is set to AF-ON for the AE-L/AF-L Button Setting under the Buttons setting in the camera's Setup Menu, then the only way to initiate AF is with the AE-L/AF-L button (it's covered on page 146 of the Nikon D3100 Reference Manual). In order for focus to remain active per your selection of AF-C focus mode you'll have to keep the button pressed. If you release the AE-L/AF-L button the focus position of the lens will remain where it was when you released the button. This is helpful if you wish to focus and then recompose without changing the focus mode setting from AF-C to AF-S.

Note that on page 56 of the Nikon D3100 Reference Manual), there's a note that says:

This implies that AF might not be as accurate in AF-C mode as when in AF-S mode.

The half press of the shutter button may still be required to activate the camera when it is in standby mode, but the half press will not affect AF.

Now on to how to tell your camera where to focus.

The rules that govern how AF systems act aren't always as obvious as we might like. They can't read our mind, or even our eyeballs looking through the viewfinder (unless the camera in question is one of the Canon EOS film cameras from 1995 to 2002 that had Eye-Control Focus).

Different AF systems don't all work the same. To get the most out of them we must learn how each one is designed to work and then practice, Practice, PRACTICE using it until it becomes second nature.

Even an entry level DSLR camera such as your Nikon D3100 has two completely discreet AF systems: The Phase Detection Autofocus (PDAF) system used when you shoot looking through the viewfinder and the Contrast Detection Autofocus (CDAF) system used when you shoot using Live View. Many advanced cameras allow the user to custom configure how quickly and the way in which the AF system responds to certain situations to customize it for a specific shooting environment.

There are some similarities among most PDAF systems, and that seems to be what this question is about. Here are a few things to remember.

Maps of two focus systems with which I am personally very familiar. Other AF systems in modern DSLRs are similar. The area of sensitivity for most focus points in most configurations are much larger than the indicators seen through the viewfinder.

The EOS 5D mark II focus system. The dark black rectangles, along with the spot metering circle, are all that appear in the viewfinder. The larger blue rectangles are the actual coverage area for each of those points. The red rectangles are the AF Assist points active with the center point in AI Servo AF mode if Custom Function III-07 is enabled. The red assist points are not marked at all in the viewfinder! 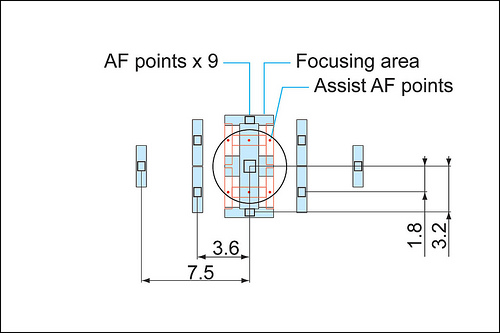 Here is the map for the Canon 7D. The same AF system is shared by the Canon 70D. For a full explanation of the data on this chart, please see this answer 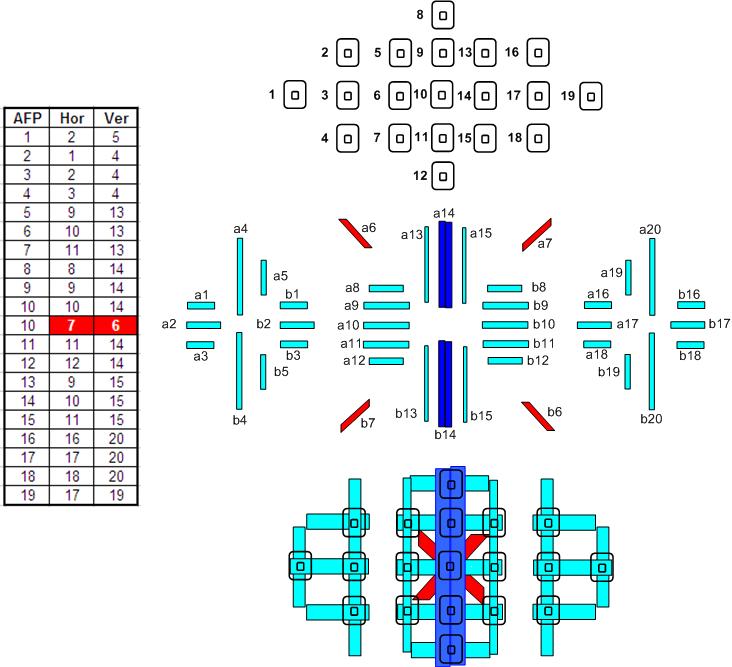 For a look at how this works out practically when shooting, see this entry from Andre's Blog.
For a look at how AF accuracy can vary from shot to shot, see this entry from Roger Cicala's blog at lensrentals.com. With the shallower depth of field (DoF) obtained when using wider apertures, there is less room for error and often the standard deviation of an AF system will exceed the DoF for a given focal length, aperture, and subject distance.

12
What settings for Dirt track night time pictures
9
If the focal plane is curved, should the outer AF points work correctly or front-focus?
3
Zoom or Prime Lens(es) for Wildlife Photography on Limited Budget (Nikon D500)

3
Are there solutions to limitations on using back-button AF on Nikon D3100?
9
Can lens focus speed affect continuous shooting speed?
5
Why am I getting poor AF results with my Pentax K10D?
4
Is there a Canon equivalent for Nikon's AF-ON focus system?
2
Can changing metering mode change focus?
0
AF-S vs STM focus noise and speed
48
How did photography work before auto-focus was invented?
0
My Nikon D5300 LCD not turning up + Auto focus not working
0
Nikon D3300 takes photos with no focus point