How to get details from obscuring the composition in digital photography?

I am trying to make photos with a simple and obvious composition with large depth of field on a modern digital camera. The problem I keep running into is that details in the photos obscure the overall composition. An example where the eye wonders all over the photograph because of the details despite large differences in tonality: 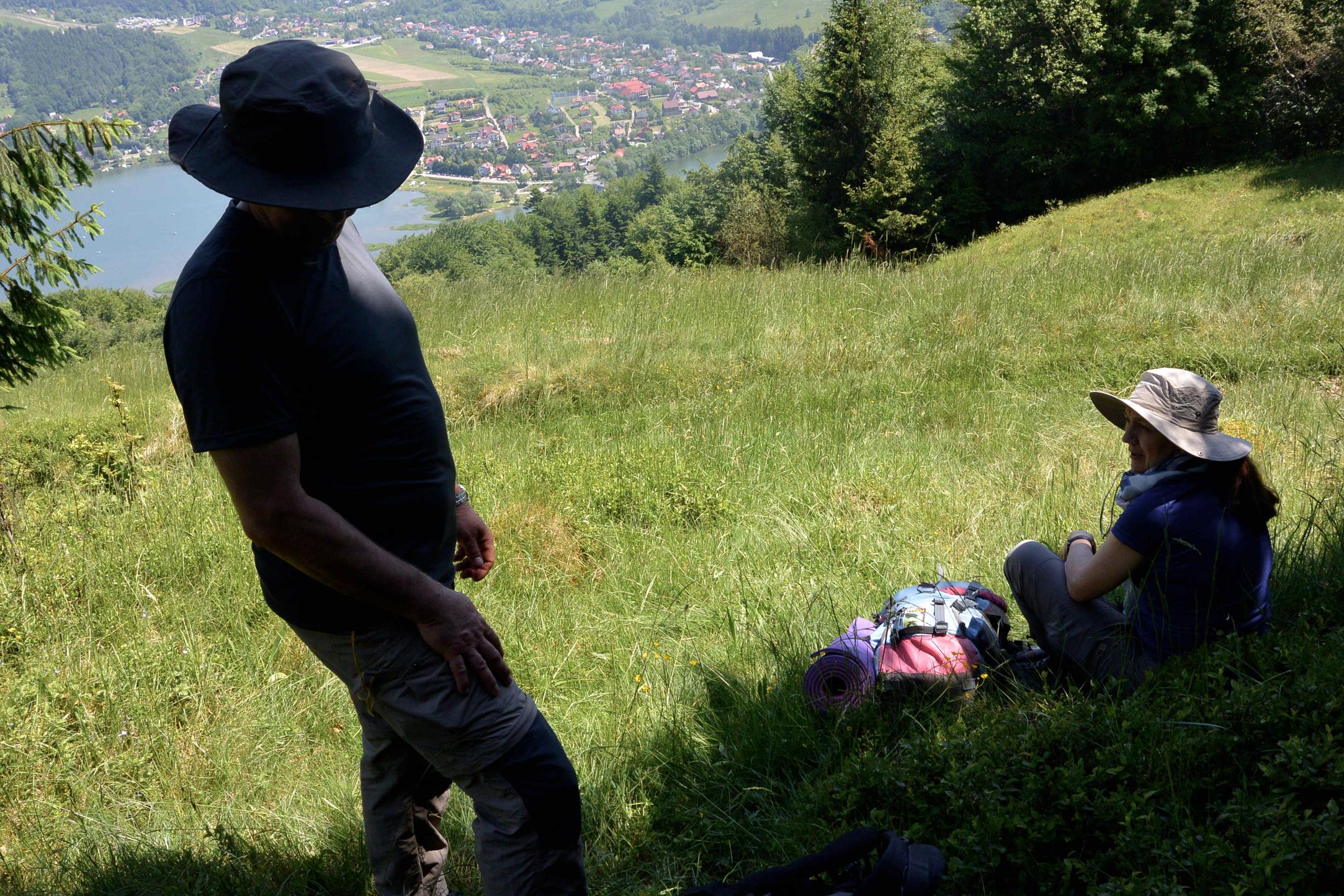 When I look at documentary work by some great photographers (eg. Lu Nan, Jonas Bendiksen, W. Eugene Smith, Cornell Capa) I notice that they either use high iso b&w film that obscures unimportant detail with grain and lets the tonality emphasize the composition or use some sort of slight blurring of he whole image to emphasize the main figures. When I try to do this in digital I fail partly because excessive digital grain (especially chroma) detracts attention from the figure, grain or texture filters I tried look unnatural. I feel like the problem is that digital cameras capture too many details compared to film and any blurring or noise becomes very obvious and unaesthetic, but it is probably my lack of skill in capture and post processing. Is there any way to reliably keep details from obscuring the large scale of composition that would be "native" to digital photography?

Your question seems to be based on the assumption that the problem is the digital camera. But it's not.

The key here is composition. When a shot, or, in fact, any image is properly composed, it looks naturally appealing and pleasant to look at because your eye travels through the image comfortably. When the composition is bad, the image literally falls apart and parts of the image start to get in the way.

Digital cameras have been more than capable of producing both technically and aesthetically great pictures for much more than 10 years now. It's true that the latter can be often greatly improved with post processing, but no amount of post can save a badly composed shot, ever.

If you want to become better at photography, I would advise reading some academic literature on the basics of composition for both photographers and artists. Opt for classic works of 20th century instead of modern and often commercialised issues. After all, our perception of composition have been practically unchanged for at least hundreds of years.

Digital is not worse than film or vice versa. It's just different. Like color is different to black and white, or like oil painting is different to the one made with pastels. The truth is, no camera or technique will make your shots great by itself. To make great shots, you have to see them and compose them in your head before you even press the button. And when you learn how to do it the camera becomes only a tool that allows you to capture what you see. That's why great photographers can make a masterpiece with pretty much anything, from top of the line cameras worth thousands of dollars to the most primitive ones like a pinhole camera made out of shoe box.

[Caveat: This answer reflects my view of photography as no more (or less) truthful than sculpture or water color or etching]

For me, the course grained composition is the silhouettes in the foreground and the interesting details are in the vista. 'Printing' darker by adjusting the black point can remove substantial detail from the figures and emphasize the silhouettes. Since the faces are already in shadow, the figures are generally no less recognizable. 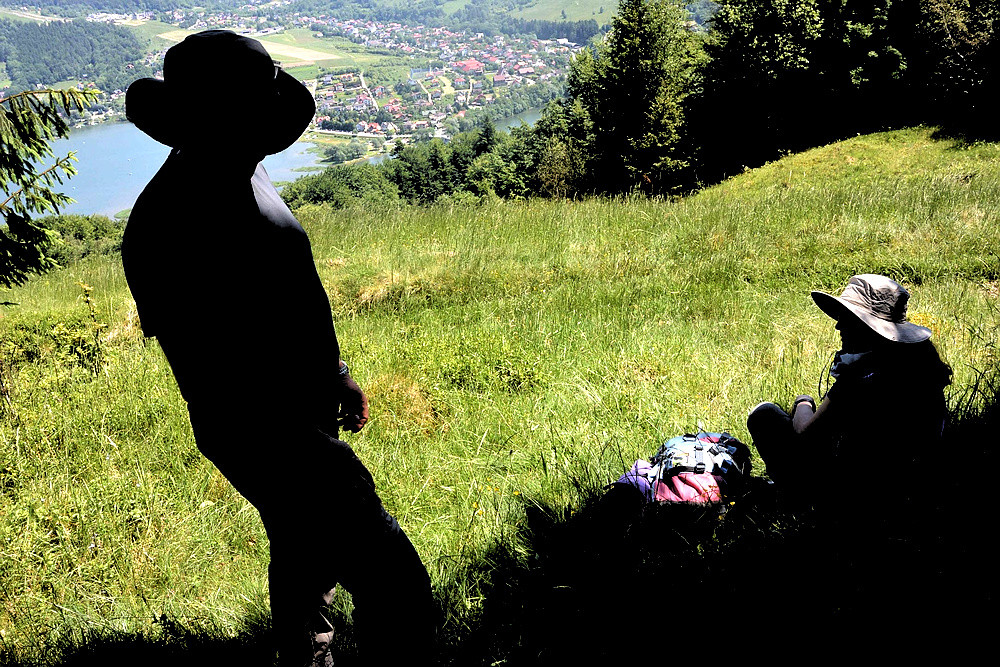 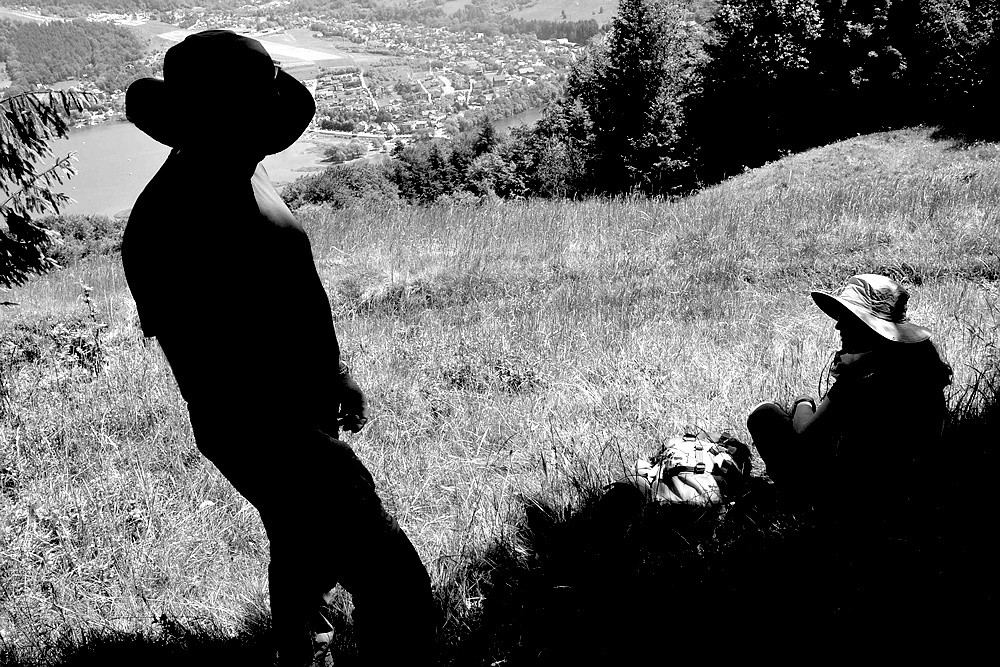 Tighter cropping can reinforce the silhouettes and remove redundant information such as additional foliage. A slight rotation to align the foreground figure with the hard edge of the photograph allows for a tighter crop. 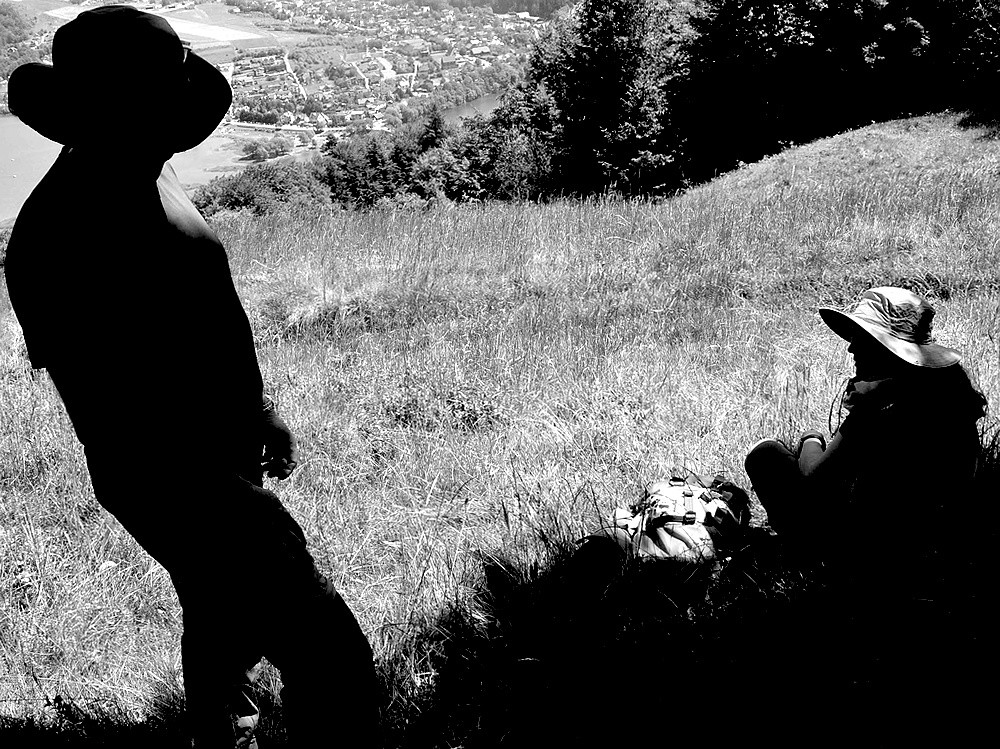 The color version of the tight crop that seems to be closer to the picture the photographer saw than the original from the question. 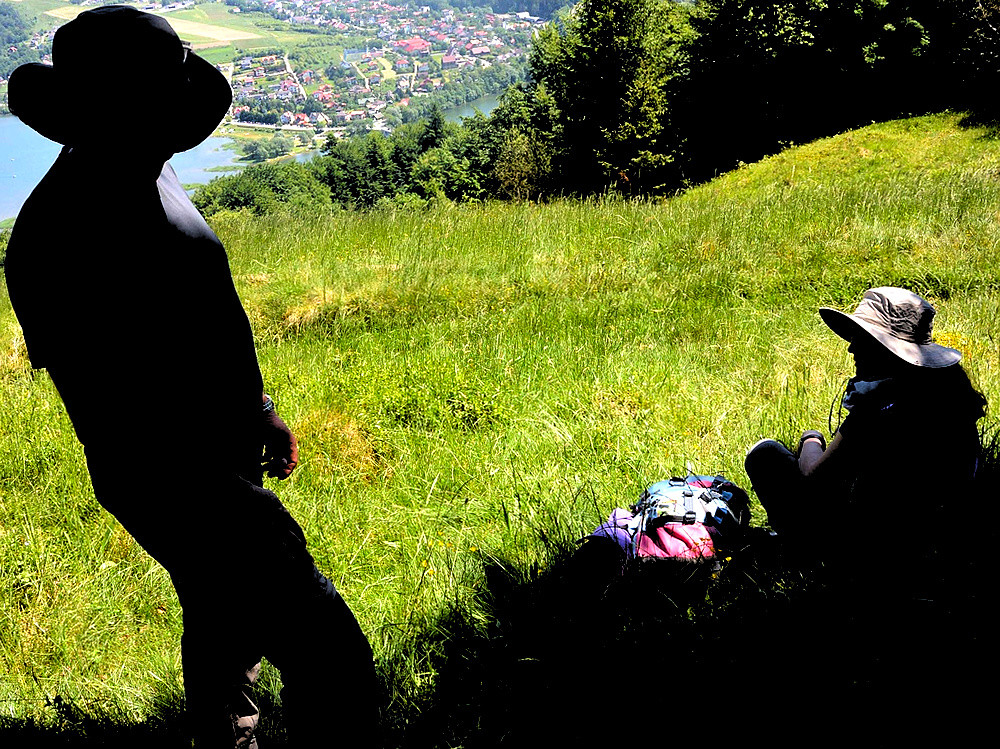 Time spent 'developing' images in the digital darkroom helps me better see and analyse elements such as the bag/coat and foliage on the left of the original while looking through the lens. By 'analyse' I mean to decide that while the foliage at the left edge is fixable during development, the bag/coat probably is not given the larger picture and maybe I should take this picture: 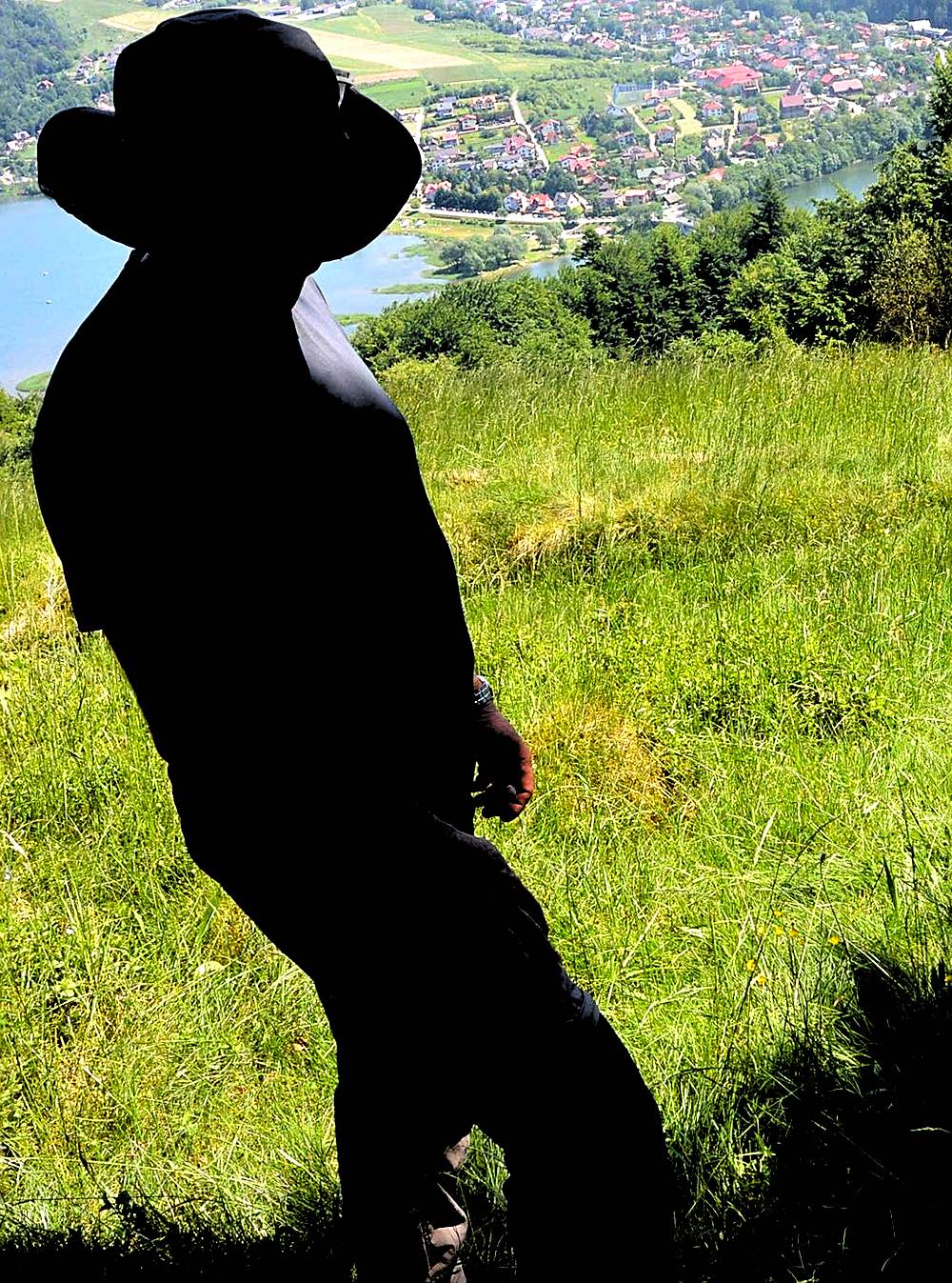 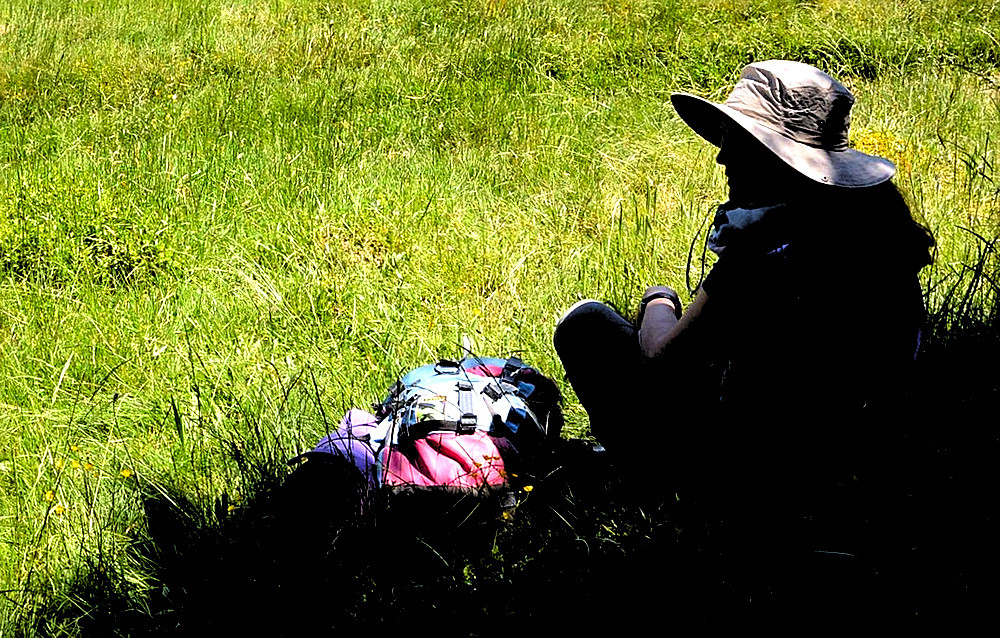 There are several tricks to drawing the eye's attention. Just off the top of my head, my go-tos are:

Of course, as with any criticism, this is all subjective. You could do the exact opposite of what I suggest and also end up with a great photograph. If anything it seems too much "stuck in the middle", leaving me confused where to look and unconvinced that if I find the point of it it will be worth the effort. Master the approaches above, then learn when to defy convention, and use them to joke with the viewer.

It is not at all clear what the focus of this picture should be.

The shadowy figures in the foreground? They are basically just negative shapes the eye flees from!

Update from comments: Those figures do not present anything interesting to the viewer, one hasn't even a face, or any intriguing posture. As it is, they are instead framing the village in the distance, leading the eye there more than anything.

The eye wanders, because there is nothing for them to lock on to, no specific focus of interest.

If you want to showcase the persons, you have to put some light on them. A flash would help there, or a reflector. A wider aperture that blurs the background would help, too. You wrote you used "not too wide an aperture" yet, judging by the image, you actually used a pretty far stopped down aperture that rendered everything in sharp focus.

Post processing can help to add blur to the background, with some work, brightening the shadowy silhouettes will require at least working from the RAW file.

Not the answer you're looking for? Browse other questions tagged composition digital-vs-film style or ask your own question.