Is my distance/size math for macro photography correct?

I was comparing Panasonic lenses the other day, and I wanted to know about their macro capabilities. Obviously Panasonic lists the closest focusing distance, but this doesn't tell me much about the image, since focal length is also a factor.

So I came up with this formula for calculating the size of an object, which fills the entire field of view, at a given distance (in this case the minimum focus distance).

to see how I came to this formula, see the image below. 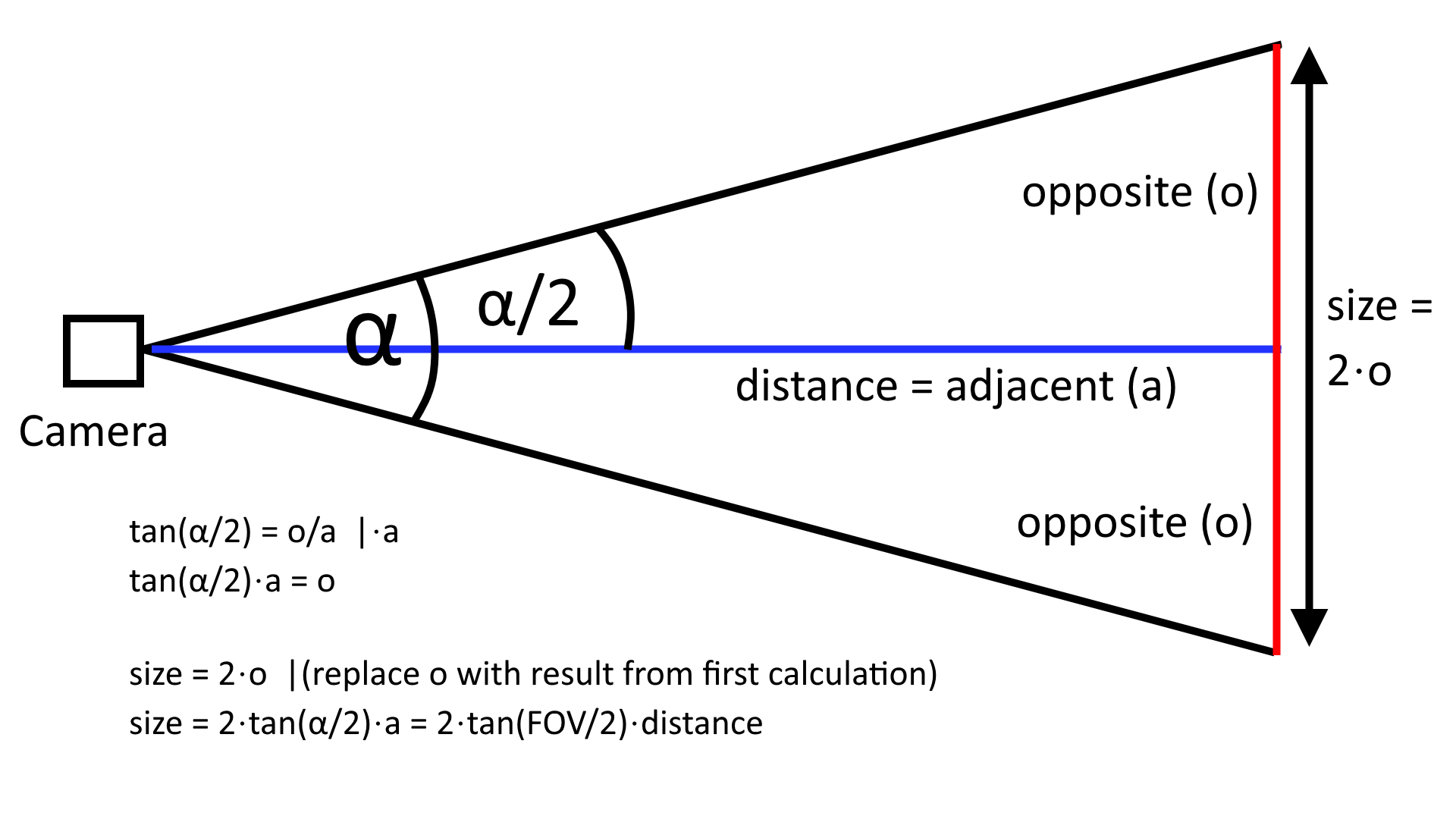 When plugging in the numbers from some lenses I came to these results:

Is the formula correct? Does this mean, if I take a picture with the first lens, I could have an object with a size of 0.076m fill the entire image?

Is the formula correct? Does this mean, if I take a picture with the first lens, I could have an object with a size of 0.076m fill the entire image?

No. Not quite. Echoing Olin's answer, you have to determine the effective focal length (EFL) to calculate angle of view (or given AoV, to calculate in-focus subject plane dimensions). For stated focal length F, magnification ratio m, the EFL ƒ is given by:

In your examples, rather than calculating angles of view, you were using angles of view given by the manufacturer. Unfortunately, in the case of the macro lens, the manufacturer's stated 40° diagonal angle of view doesn't state the focus distance; most likely, that is the angle of view when the lens is focused to infinity (which is the condition where focal length is defined, at least when using the thin-lens formula).

Your geometry is a reasonable approximation for distant scenes. At close scenes, the focal point to image plane distance is significant and must be taken into account.

The data states the diagonal angle of view is 40° for this 40mm. This is true if the lens is mounted on a DX (compact digital). This 40° angle of view is computed based on the diagonal measure of this format. The DX format measures 16mm vertical (height) --- 24mm horizontal (length) – 28.8mm diagonal (corner to corner).

We can use ordinary lens formulas to compute the angle of view realized. Below is the formula you can plug into Excel. A quirk of Excel is it works in radians not degrees. At the end of the formula we plug in the conversion which is *180/PI(). Anyway the math is:

As you image objects closer than infinity ∞, the distance lens to image increases. At life-size (magnification one also called unity or 1:1) the projection distance is 2X the focal length. In other words at unity, a 40mm lens will project from a distance of 80mm. For a unity setup, the focal length, now called the “back focus” is 80mm. Now we must compute using 80mm. For this setup:

Another approach is to calculate the object distance that yields a specific magnification. Suppose, using an DX camera, format 16mm height by 24mm length with a 40mm lens mounted.

Our objective is to copy a document 5 inches by 8 inches and fill the frame to the maximum. We calculate the magnification needed for both height and length, we must use the minimum of these two values otherwise we will get overspill.

Now the task is to setup a camera to object distance that yields a magnification of 0.1182X

If we use 0.1182 X then the image dimensions of the object will be:

Object distance 378.4mm with a 40mm yields the required magnification. The object fills the camera frame.

Not the answer you're looking for? Browse other questions tagged macro calculations field-of-view or ask your own question.

38
How do I calculate the distance of an object in a photo?
0
Calculation for getting dimension of object in image not working