What is the red grid pattern appearing in the video?

While watching a talk on youtube, I noticed a strange grid-like led-like pattern a few times during the talk. An example: https://youtu.be/Toluc5MCQWs?t=868

I'm not sure what that is, but I thought it might be something related to recording the video.

Can anyone explain what that is? 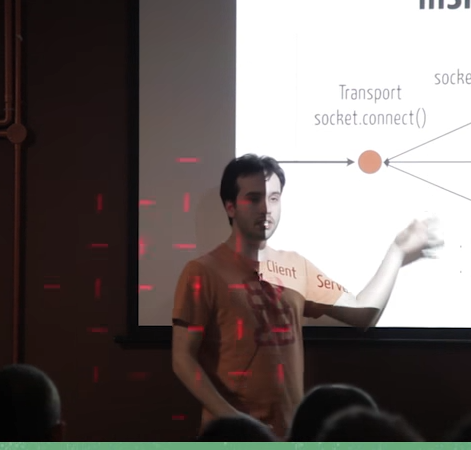 That is an auto-focus assist light shone by another photo camera that is left from the video camera.

This link explains how this light works on Nikon DSLR cameras. As far as I know it is similar to other camera and flash brands.

As Saaru says - it is an unrelated AF assist light form a "stills" camera.

Using this is very rude* on the part of the photographer and not at all necessary in such high contrast situations.

The error is with the lecturer who should have issued a first and final warning the first time it happened. Such lights are often extremely bright and distracting for those they illuminate due to the relatively low power being concentrated in a small overall area.

I have had people in group photos where a flash was used advise that they were as distracting as the flash.

*-Inappropriate AF light operation is usually obvious to the photographer at close range due to the resultant illumination, but may not be obvious when the subject is some distance away. The AF light does not have to be useful to be annoying :-(.
I try to ensure that the "focus assist" light is disabled except when I very specifically wish to use it. I recently acquired a new camera (Sony A6300) and on one of its first "outings" I failed to properly disable the AF light. I took photos in an inside event where photography had previously been acceptable BUT should have been unobtrusive. It wasn't!!!
Due to the distance photos were being taken at I did not see the AF light working and the subjects were probably not usefully illuminated by it. I subsequently received several adverse comments.

3
What is the photopic luminous efficiency function?
6
What is the reason to use fewer points than the maximum available for the autofocus?
13
What is the EV scale?
1
What settings do I need for shooting a candid against the sky?
32
What is the advantage of the huge number of AF points?
8
What is the device held near the subject's face in this picture?
1
What color are actual LEDs used in the 430EXii Speedlite's AF-assist?
3
Are there cameras that autofocus during an exposure?
0
Why is my Nikon dSLR taking so long (7 seconds) to autofocus?
1
Focussing issue with Canon 90D and Tamron 24-70