Left part of image is much softer than the right part: decentered lens or bad M42-EOS adaptation?

The problem mentioned in the title, i.e. 'left part of image is much softer than the right part', is clearly demonstrated in the image below. 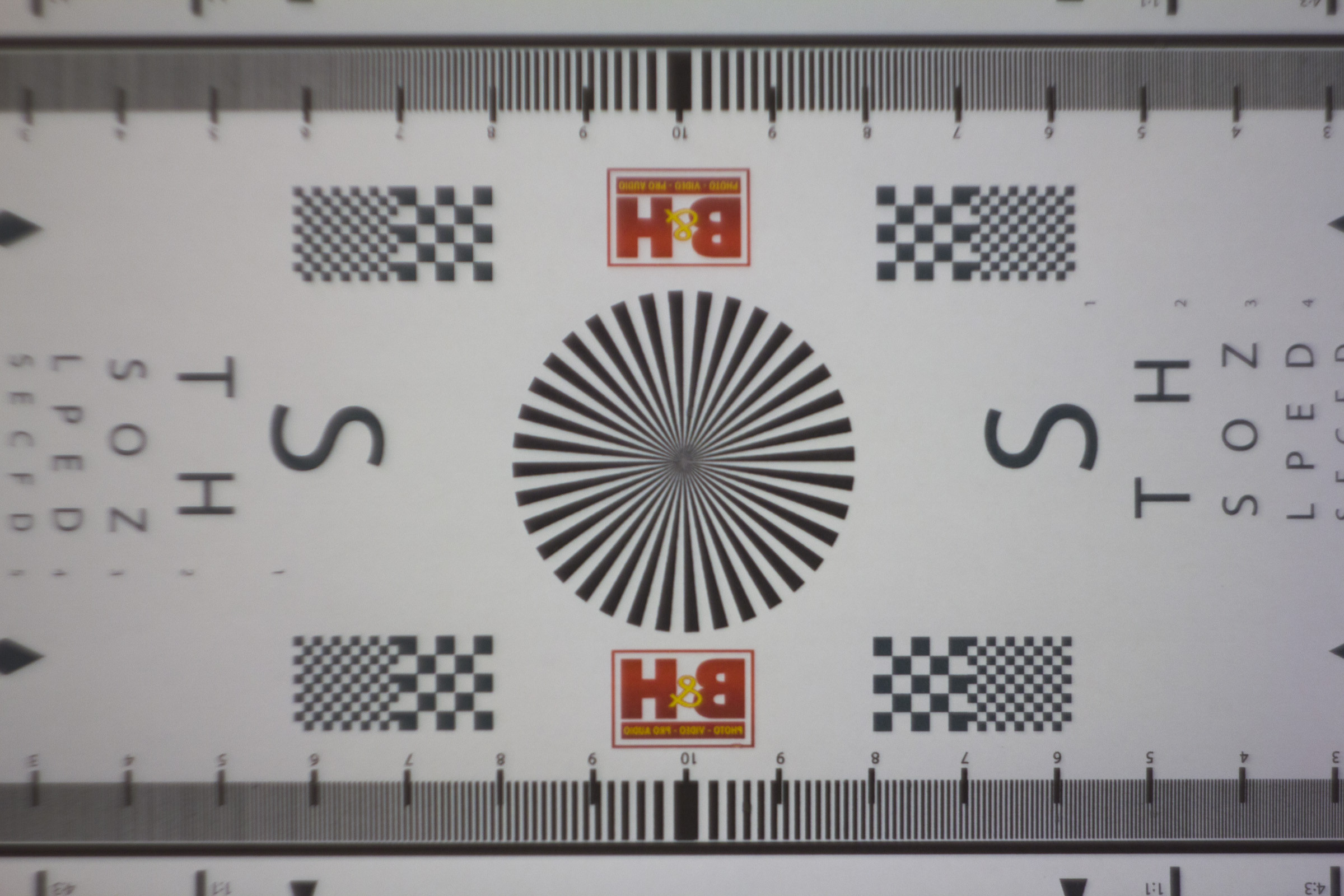 It is less obvious when it 'focuses' at the centre of the image: 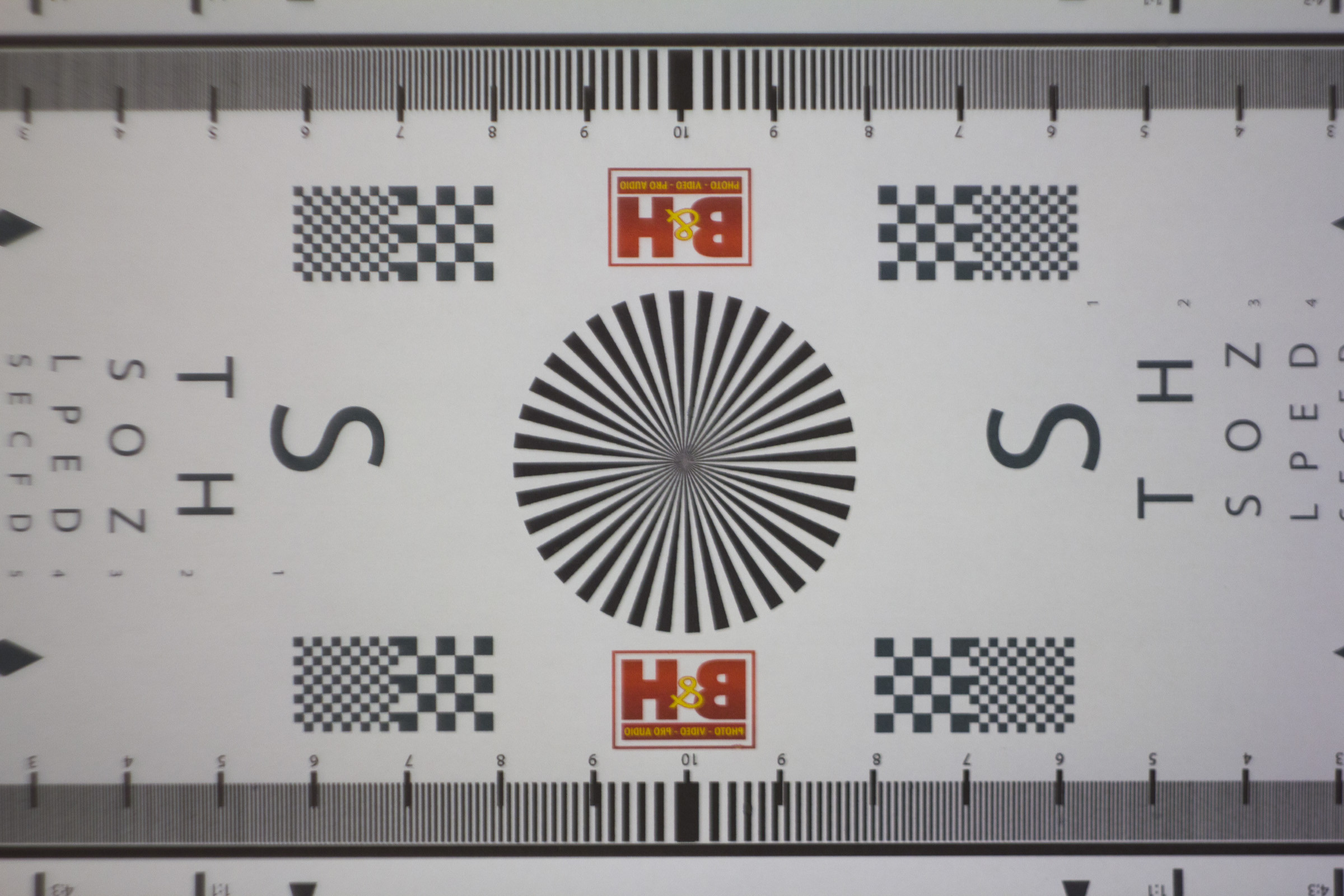 This Helios 44-2 is the newest version of its kind. The problem with this version of the lens is that the surface of the M42 thread flange is flush with the back end of the focus ring, as can be seen from the image below: 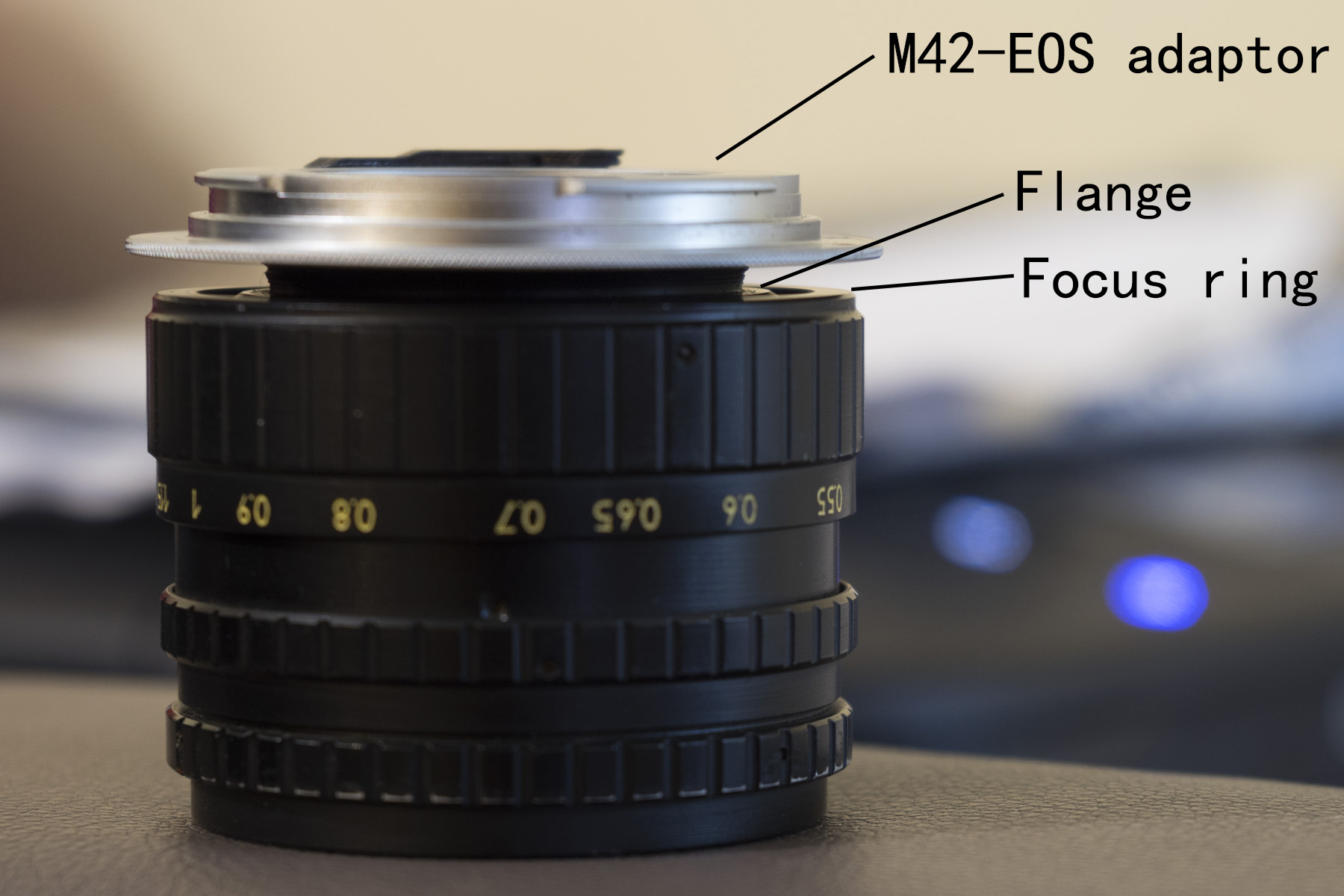 My worry is if the surface of the flange is slightly lower than the back end of the focus ring, the M42-EOS adaptor may come into contact with the focus ring, which effectively increases the distance between the sensor and the lens, and I do feel a little bit harder to turn the focus ring with the adaptor attached.

So, what do you think? Is this lens decentred or it could be the adaptation?

Here's some 100% crops of two other images I took this morning against the test chart. 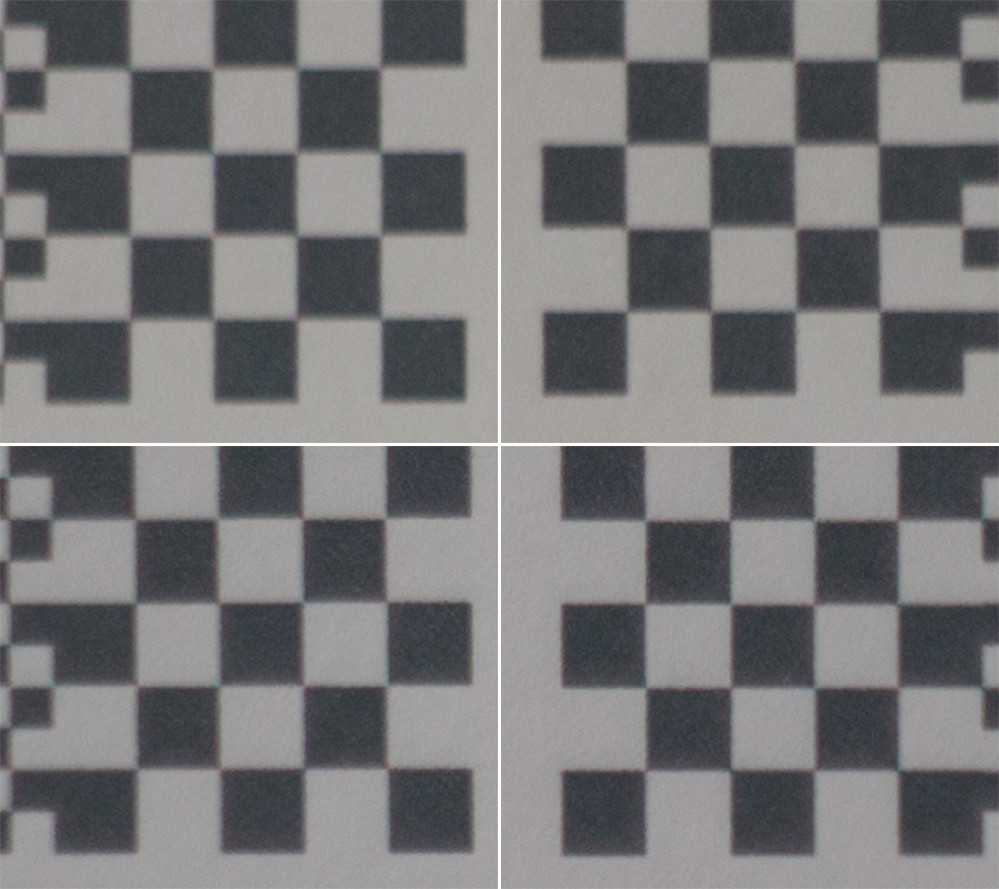 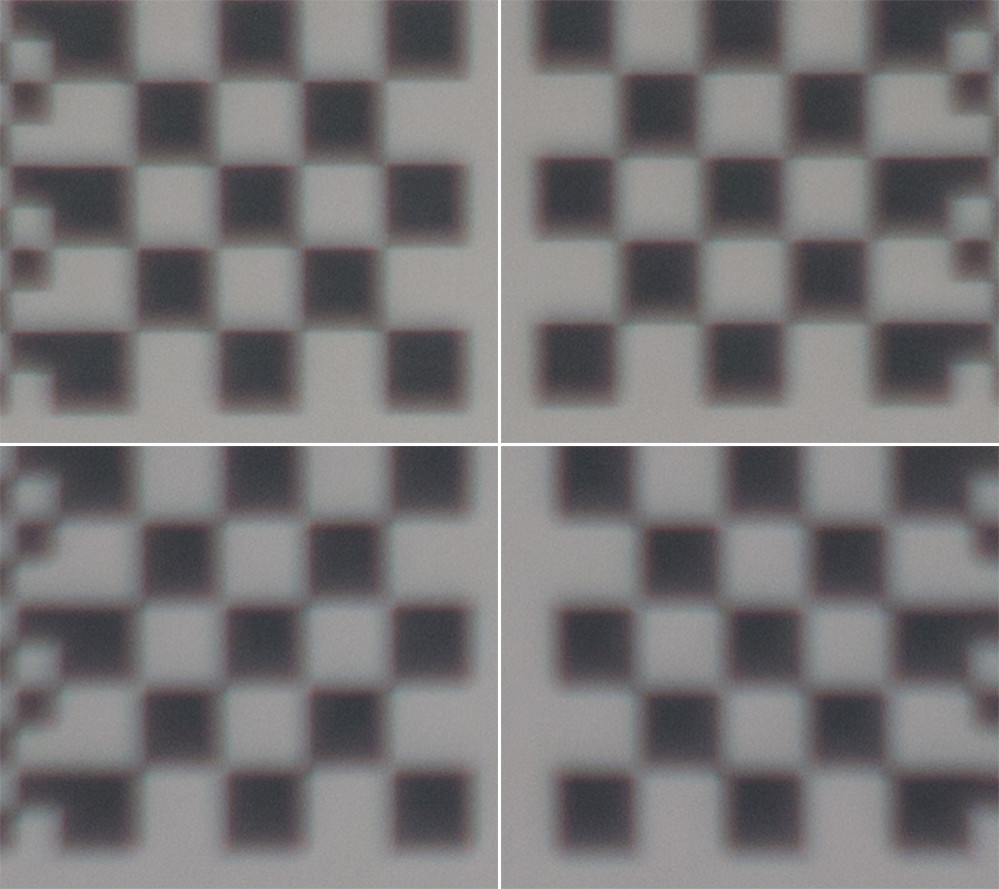 These images show the four large black & white tiles arranged around the star pattern in the test chart. The purpose of this is to do a 'flare' test similar to what Roger Cicala suggested in his blog post (Thanks @MichaelClark for this link).

if the lens is decentered or significantly tilted the center blur will ‘flare’ out in one direction or another as you defocus.

In the defocused image, a substantial amount of flare can be seen in the tile blocks in the top left and nearly invisible in those in the bottom right. This might suggest the lens is probably indeed decentred or tilted.

Is this still possible the adaptor plate to blame?

What you are describing is properly known as tilt. What it means is that the optical axis of the lens is not perpendicular to the plane occupied by the camera's sensor. In your case the entire lens appears to be tilted relative to the camera's lens mounting flange.

Just look at the adapter plate. The right side in the photo is significantly closer to the focus ring than the other. With wide aperture wide angle lenses misalignment of as little as 20 microns can be seen when used with high resolution sensors. In this case we can eyeball the difference from several inches or even feet away! As it sits the lens is flat on the table and the adapter plate is crooked. But once the lens is attached to the camera, the adapter plate will be square with the camera and the lens will be pointing at a slight angle.

There are specialized lenses that intentionally introduce such angles between the image plane in the camera and the optical axis of the lens. They usually include tilt movements as well as shift movements. Thus they are called Tilt/Shift or Perspective Control lenses.

Just as an aside, a decentered lens element is, in some ways, similar to a shift movement using a T/S lens. The biggest difference is that all of the elements in a T/S lens are moved together and the various pieces of glass stay in the same alignment with respect to the others. When only one lens element moves in a direction perpendicular to the optical axis of the lens it results in degraded image quality because it is no longer aligned with the other elements in the lens.

You could also get the same result if the camera/lens system is perfectly self aligned but the entire system is improperly aligned with the test chart. The sensor and test chart must be parallel to one another or one side of the chart (or the top, or the bottom, or one of the corners) will be closer to the camera than the other. This will result in only one part of the chart being in focus at any particular focus distance.

For a good explanation of the difference between decentered, tilted, and mis-spaced lens elements (with illustrations) and how to test for each, please see Roger Cicala's excellent blog entry titled: Testing for a Decentered Lens: an Old Technique Gets a Makeover

2
Why my group photos get blurry around the edges?
2
Why is there motion blur at the edge of photos?
-1
Damaged coating tamron 18-200mm?

1
Pentax DA L 55-300mm lens very soft--is it broken?
4
Lens f-number and speed on adapted lenses
7
What are the differences between AF/metering chips for M42 lens Canon DSLR adapter?
3
Diagnose a damaged lens from focus test results
2
Downsides of using M42 or T mount lens on newer mirrorless bodies?
0
Lens Focus Issues
0
How can I fix back/front focus on my Canon 50mm F/1.8 STM lens?
2
Are the artifacts I am seeing with my Samyang 24mm f/1.4 typical?
1
Is this lens decentered?
0
Convert Helios-44 m39 mount to use it as magnifying lens