What is the breech mount on this Chinonflex lens? 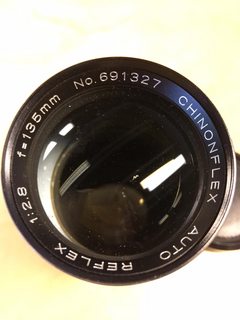 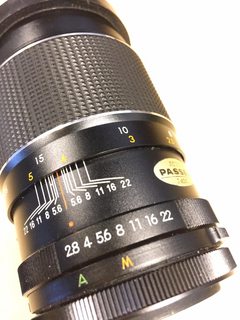 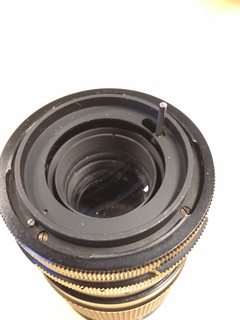 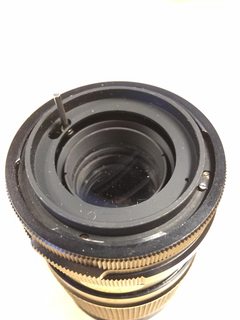 I agree with Dave @HeritageCameras that this lens likely has a Canon FL mount. The reasons are as follows:

You can easily confirm the mount by attaching the lens to a camera with an FL mount.

If you are looking for an adapter, it is compatible with the Canon FD mount using stop-down metering. See Evolution of the Canon FD Mount. 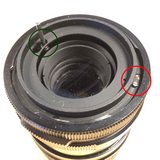 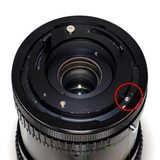 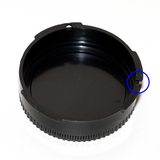 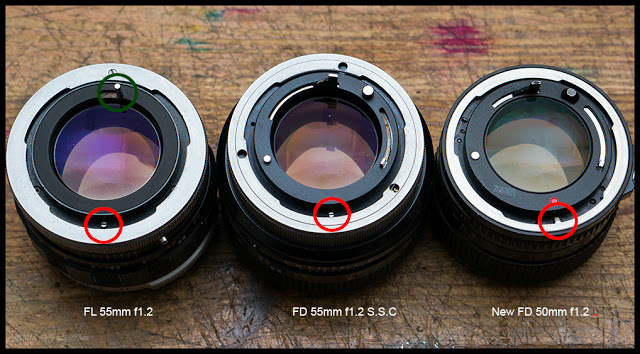 The pin on this lens is not longer than the pin on any other FL or FD mount lens. It only appears longer because of perspective:

It seems unlikely that not having a moving mirror would allow the Pellix to be able to take a longer pin. The mirror in FD mount lenses is above the aperture-control linkage. Whether a mirror is present or moves does not affect how long the pin can be. 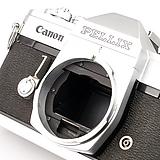 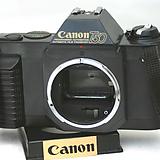 This is an old thread, but if anyone's still interested I think that lens is in Canon FL fitting. This used the same breech lock mount as FD, with auto diaphragm but without all the meter coupling features. It was used on cameras such as the Canon FT and Pellix, while the lenses can also be fitted to many FD SLRs for stopped down metering.

It is not a bayonet mount, which is far more common, but rather a breech lock mount. The bayonet lugs would have been on the camera side of the connection between lens and camera.

It is not a normal example of either of the two most common breech-lock mounts: The Canon FD mount or the Canon FL mount that preceded it. The pin extends further past the flange than most FL or FD mount lenses.

It looks very similar to a Miranda type mount, but with only three lugs instead of four.

It also looks a lot like a T4 or TX interchangeable mount system but those were only made by Vivitar and Soligor.

The Tamron 'Adaptall' system was similar but this lens isn't a Tamron clone either.

The 'A' and 'M' switch (for 'Auto' and 'Manual') indicate it is made for a system that had the ability to automate the aperture being stopped down just before the shutter opened.

Early Canon FL lenses had two aperture rings: the "manual" ring that stopped the lens down immediately when turned, and the "automatic" ring that set the aperture value but didn't stop the lens down until just before the shutter opened. Later FL lenses changed to a design that had a single aperture ring and a selector switch that allowed the user to choose whether the aperture ring acted "manually" or "automatically." (Note: there was no automatic selection of the aperture setting based on meter readings from FL cameras that had meters - it still had to be set by twisting the "automatic" ring to the desired value - but rather that the camera automatically stopped it down just before and then opened it back up just after the shot was taken.)

But that pin on the back of the lens looks too long for most FL/FD mount cameras!

There is one remaining possibility: This is an FL mount lens intended to be used only on the Canon Pellix or its follow up, the Pellix QL.

The pin is WAY too long to be used on FL or FD mount cameras other than the Pellix. The Pellix did not have a reflex mirror. Instead it had a non-moving pellicle mirror that allowed about 2/3 of the light that fell on it through to the film plane and reflected about 1/3 of the light up through the focusing screen to the viewfinder.

Canon made one lens that was made to be used only with the Pellix and Pellix QL:

The FL P 38mm F2.8 also projected into the mirror box. It was specially designed for the Pellix and could not be used on any other camera because the moving mirror would hit the rear of the lens. This lens had a longer lens mount index (the pin on the back or the lens at the top), that only fit the deeper cutout at the top of the Pellix's lens mount, thus making it impossible to mount this lens on any other camera.

The reason for the FL P 38mm 2.8 was to allow a rear lens element to protrude into the light box in a way that it would have been struck by a reflex mirror swinging up to the focusing screen. There's no obvious reason why a telephoto lens such as a 135mm would need to protrude well into the mirror box.

Whatever the reason, with that longer pin, this lens might only fit a Pellix or Pellix QL.

This mount is called a Breech Lock. It is similar to bayonet mounts in that tabs are used to lock the lens and body together. The difference is in bayonet mounts, the entire lens is rotated to form the lock. In a breech mount, the lens is fit to the camera in correct orientation and a ring, on the lens or camera body, is rotated to lock it in place.

A pin extents out and mates with a mechanism that controls the working diameter of the iris. This was first introduced by Carl Zeiss Optical Germany, and variants are used by many camera makers.

2
What is the breech mount on this Hanimex lens?
2
Novoflex bellows lens mount identification