If I take a photo of a light outside the visible spectrum, what will it look like after print?

As i was reading this article, there was a section that drove my attention to it:

Conversely, while violet light is the highest frequency of color humans can detect on the electromagnetic spectrum, many insects can see a higher frequency of light invisible to us, ultraviolet light.

So, assuming that insects can see ultra violet, it probably has some sort of color to them. Is it possible to print the color?

If yes, then how will the humans see the color? Do we see it in violet or we can't see it at all?

If no, then is it because our printers or color schemes ( RGB, CMYK, etc ) can't cover it?

We all have seen what happens when you point the remote controller to a camera and watch it in the camera's LCD (not the viewfinder). You will see the light, but it's kind of white, while it's supposed to be more like red, since it's infrared.

Let's say we print a photo taken by that camera from a remote controller. Can we print it using the real color of the controller? What will the color look like?

But this kind of photography happens all the time using a device that is sensitive to that wavelength. For example Astrophotography or infrared photography.

What it is done is that the received data is reinterpreted and re-coloured.

There are not "official" colors to reinterpret the image, they can be simply random or tweaked for the specific usage. 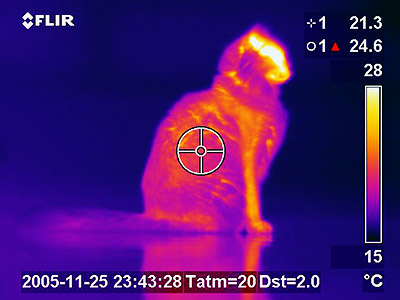 The specific case of the infrared controller pointing to the camera is "kind of white" if it is overexposed. I just did a quick test and I see it... reddish.

Handheld images. Do not expect overwhelming beauty. I just tested this on a Canon and a Nikon cameras. And both did the same results. If you overexpose the image you get a white dot. 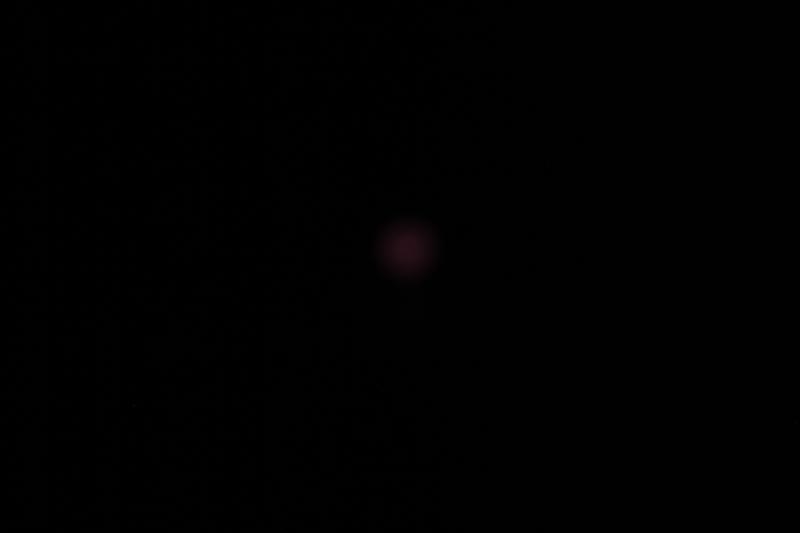 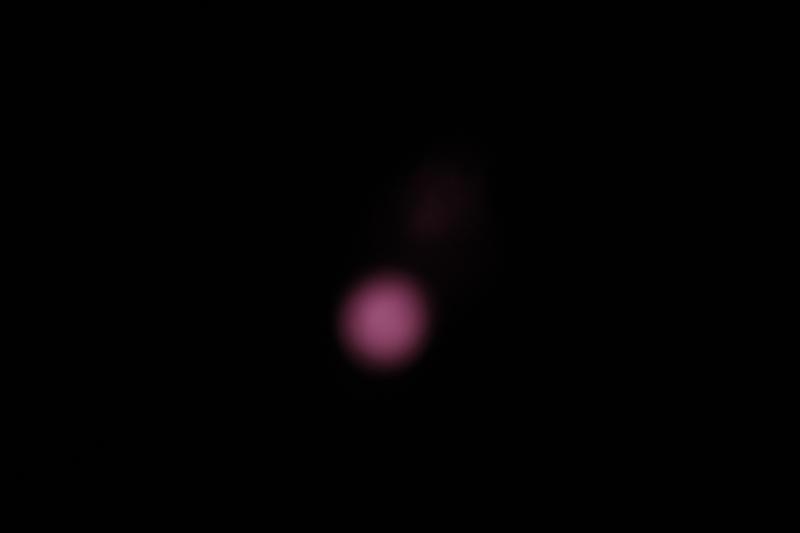 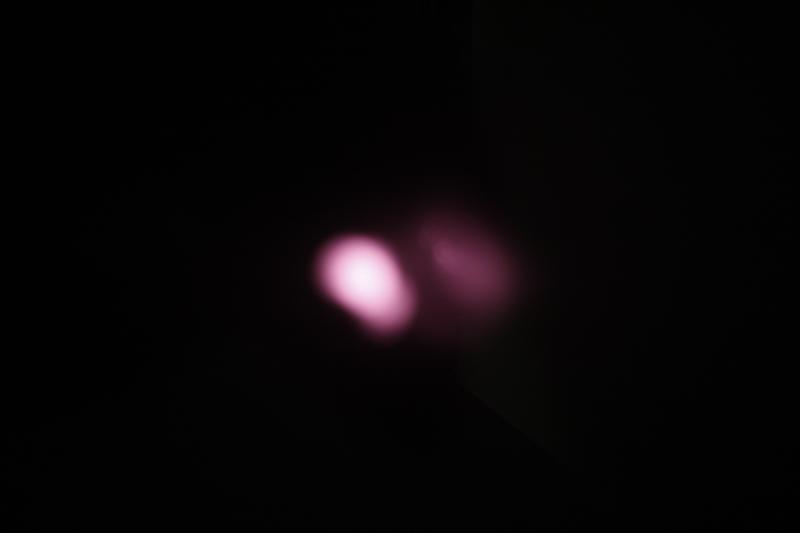 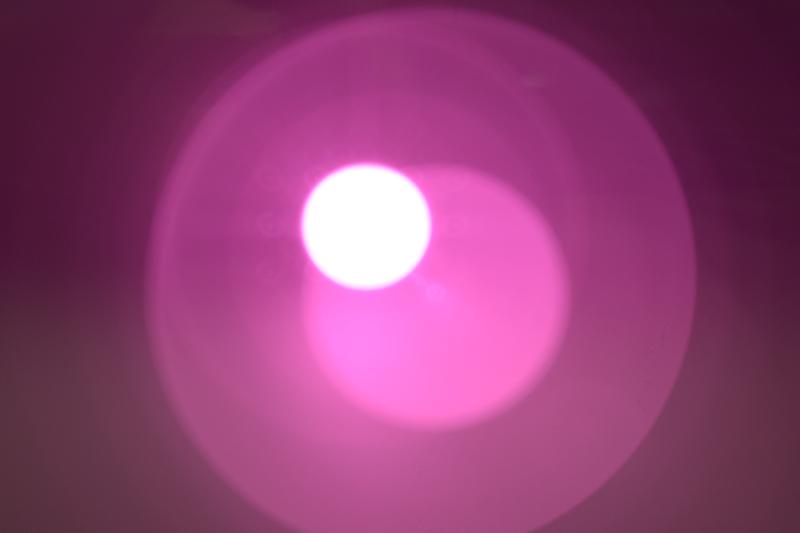 And a probably offtopic answer here. Can we print colors that we can not see?

And yes, we can print ink that we can not see. This is used in bills on some countries, and the ink can only bee seen if it is illuminated with a particular wavelength, for example, "Black Light".

Or we could potentially print with a radioactive ink that could only be read with a Geiger counter.

We tend to use the word "color" a bit ambiguously, so let me pose an alternative answer. If you want to print or otherwise produce an image which has the same spectral reflectivity in the infrared (or ultraviolet), so that the image is perceived as identical to the original by an animal which can perceive those wavelengths, then it's certainly possible. You'll need specialized inks or paints for this purpose.
In my professional career ( adaptive optics, hyperspectral imaging, and more), I've had plenty of exposure (sorry!) to target designs which mimic real-world objects' absorptivity and reflectivity across a wide range of wavelengths not visible to humans.

Now, as to printing the "image" from a camera: as you noted, the sensor chip does respond to infrared wavelengths. The trick is in figuring out how to distinguish the electrons in each pixel well generated by IR rather than visible wavelengths. You really have no option there but to install a visible-blocking filter.

Almost all (probably all, but all is a strong term) printers that render photos use a small subset of specific colors of ink. These inks each only look like one particular color, but the printer forms what looks like multiple colors by putting colors next to each other in a process called dithering (some specialty printers may actually blend the colors, but that's a very rare case). This dithering process ends up looking to our eye like the color that was in the image, even though it is made up of dots of other colors.

The reason this works is that our eyes can't see small enough to see the individual dots. We see a color when light reflects off of something and particular wavelengths of light are picked up by our eye. Each color we can actually see has a particular wavelength, but when we see some red and some blue coming from the same place, because they both hit the same receptor in our eye, we see a color that is a mix of the two.

With an ink designed to absorb wavelengths of light other than infrared within the visible spectrum of your intended observer, you could make an ink that would only reflect IR to a viewer, but what it would look like to us depends on the characteristics of the ink in our visible spectrum. Assuming the ink was a "perfect" ink (a term I'm making up now) and absorbed all wavelengths in the EM spectrum other than IR, then we would see black when we printed with it if it completely covered the paper. In actuality it probably wouldn't completely cover the paper (particularly since there are other light than just IR around the remote) so we'd probably see it as grey because some of the paper would also be reflecting light back to us.

If it wasn't a "perfect" ink (no ink can be truly perfect to the entire EM spectrum), then we might see it as any color that falls outside of the intended viewer's visible spectrum and within ours, depending on what wavelengths it reflects.

First, let's discuss why you see a white dot when you point an IR remote at your camera

The key to understanding why anything recorded by an RGB sensor is white in an RGB representation of the recorded image is to understand that if exposure is high enough ANY color of light, visible or otherwise, will cause full well capacity for red, green, and blue filtered pixels. This is because each pixel well does not really record any color - it just records a brightness value. The filters mean light that is not the same color as the filter will be negatively attenuated and much less of such 'off wavelength' light will be allowed to pass through the filter. But as pretty much any spectral response curve for consumer cameras will show, a little bit of all the wavelengths of visible and non-visible (to humans) light can make it through each color filter and will affect the resulting image if the light in the recorded scene is bright enough at that wavelength.

In the spectral response curve above, we can see that response to light above 800nm is relatively uniform for this particular sensor. This is fairly representative of most sensors used in consumer cameras. Any light at wavelengths above 800nm striking the sensor would have an equal response in sensels filtered for red, green, and blue respectively. When those luminance values are interpreted by the algorithms that create color values for each pixel location, those equal values for R, G, and B will be interpreted as white. This is why most cameras have infrared cutoff filters in front of the sensor - so that IR light doesn't fool the camera into thinking everything is more white or more a shade of grey with equal amounts of red, green, and blue than we perceive it.

At the other end of the spectrum, UV light is light that has a shorter wavelength than humans can perceive. Most cameras used for artistic photography (as opposed to scientific or industrial uses) also have an ultraviolet filter in front of the image sensor. But like most photographic filters, if a light source is bright enough some of the light filtered for a particular wavelength will still get through.

This is what you are seeing in that white dot.

Enough of the IR (or more likely near-IR) light emitted by the remote is making it through the filter stacks and Bayer mask in front of your sensor to cause an equal brightness value to be recorded by the respective red, green, and blue filtered sensels at the area on your sensor where that light is falling.

If the camera, such as your camera in the question, has recorded the IR light but misinterpreted it as visible light then the result of printing that image will be colors in the visible spectrum.

If, on the other hand, you use a very specialized camera that is able to discriminate IR light from visible light there are several things that could happen. Two of the likely possibilities:

If you viewed such a printed image from the second scenario above under full spectrum light you would either see black if the ink fully covered the surface of the paper or gray if some of the visible light reflected by the white paper is allowed to be reflected through the gaps between the ink droplets.

UV light that insects can see but that humans can't would be pretty much the same thing as IR light, just at the other end of the visible spectrum. You would need a camera that can discriminate UV light from visible light and record it in a color space that preserves that capability to discriminate the various wavelengths of UV from visible light. You would then need a printer with inks capable of reflecting UV light while absorbing visible light. For the insect to see the UV components of the printed image the print would need to be illuminated with light that included those UV wavelengths that the inks used to print the image would reflect. If only visible (to humans) light was used to illuminate the print, there would be no UV light to be reflected by the UV inks and the insect would not see the UV components of the light from the scene.

Not the answer you're looking for? Browse other questions tagged printing color human-vision-system or ask your own question.

33
How can knowledge of human perception of color be used in photography?
4
What steps to take to match screen to print?
5
Have inkjet prints surpassed chemistry-based paper prints in terms of color gamut?
0
Take a photo and print it to show approximate view of a human from a distance?
6
Why are the color spaces we have access to incomplete?
11
What would happen if a camera used entirely different primary colors?
1
Inconsistent colors across different apps in windows
40
Why don't cameras offer more than 3 colour channels? (Or do they?)
1
How to calculate average color for some part of picture