How do catadioptric camera systems show the whole frame despite mirror obstructing the center?

I am a beginner and I recently started reading about catadioptric systems. While I understand how they can be used to simulate longer focal lengths, I am still confused as to how the entire frame is captured, since the mirror obstructs the center. The question is probably trivial, but I haven't been able to find an answer online.

There will not be a black spot in the image, and the (very narrow) area of the image which in focus is not affected. But the out of focus areas are affected by the central mirror.

Out of focus points of light, which would form "bokeh balls" when shooting with a regular lens, become rings. Some photographers, such as Shihya Kowatari from Japan, use this to artistic effect.

Many regular shooters find the out of focus areas as interpreted by catadioptric lens distracting (they can run a bit wild).

Here is a good example of how the light travels inside, taken from this Wikipedia article. 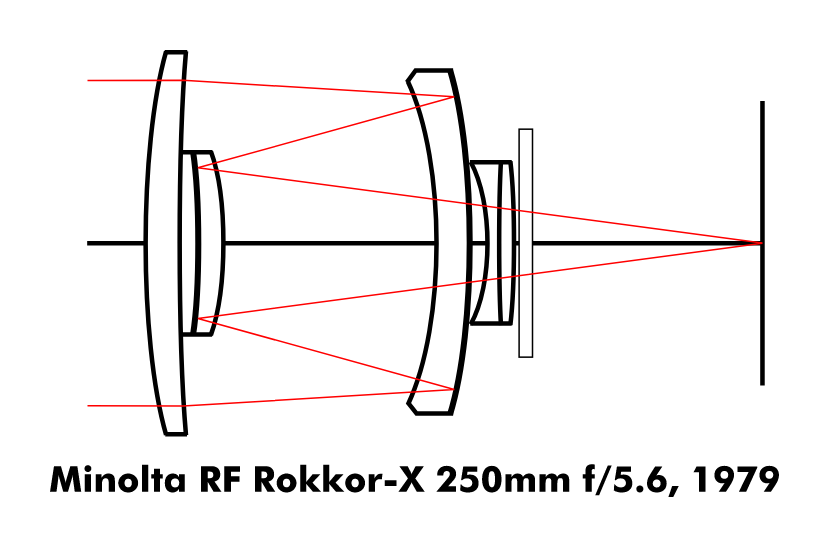 Think of the vista being imaged as being completely covered by tiny transparent dots. Reflected light from each dot radiates out. Some rays originating from every point will hit the lens. Moreover, from that point some rays will hit the center of the lens, some will it the left edge, and some will hit the right center of the lens. In other words, some light rays from every point hit everywhere on the lens’s surface. Each will have its path of travel changed by the curve of the lens. All the light rays from a given point will follow a new path. A ray trace shows that these will converge and image as a single point. This is an image point that we can photograph or magnify with an eyepiece lens. Not all these rays will make it to the image plane. Some will be obstructed by dirt on the lens. Some will be obstructed by an obstacle like a secondary mirror. The image is formed regardless of the missing rays. The chief effect of the missing rays is that the image will be dimmer, because some rays were not available to contribute their light energy.

You can test this by placing a central blocking obstruction on your camera lens. You can paste a circular piece of paper on your camera lens and take a picture. You will find that the camera will still image. It is common practice to dot a lens with paint to make fine adjustments as to image brightness. Enlarger printers that use cluster lenses project several images of a negative simultaneously for high speed printing of school pictures. You know, the packages of small and large pictures made for sale at the school. Cluster lenses must be speed- equalized, otherwise, some image will be too dark and some to light. We would dot the ones that pass too much light with black paint. Sounds goofy -- but it works without significant degrading of the image.

4
Does wide angle equivalent in crop sensor skew image?
7
What could cause this visible artifact which seems to a be a glowing inverse of something outside of the frame overlayed on this photograph?
3
Why does it seem like large sensors are necessary for good low-light performance?
4
How many times is the image inverted inside a DSLR camera?
4
How can I test that the image is inverted in a pinhole camera?
1
Will using a full frame lens with extension tubes on a crop sensor camera reduce the "crop"?
0
How can I find a compact camera where I can change the lens?
0
Catadioptric lens: equivalent focal length and focus at infinity
0
How do i find the distance required to resolve a point on a page from a mobile camera?