Does the lighting make the girl in red's skin look blotchy and are her facial features slightly over exaggerated?

The girl in red is a photographer. And she says that photo taken of her below is all wrong. Specifically, she says the her skin looks blotchy or just strange. She also says that certain features of her face are exaggerated. I'm an amateur photographer, and maybe it's because she has years of experience over me, but I cannot see what she is talking about. So I turn it over to you all: does her skin look look strange in the lighting? Do her facial features seem exaggerated. There is a pic I took of her where she did a similar pose to compare and comparatively it does seem there is an exaggerated difference: 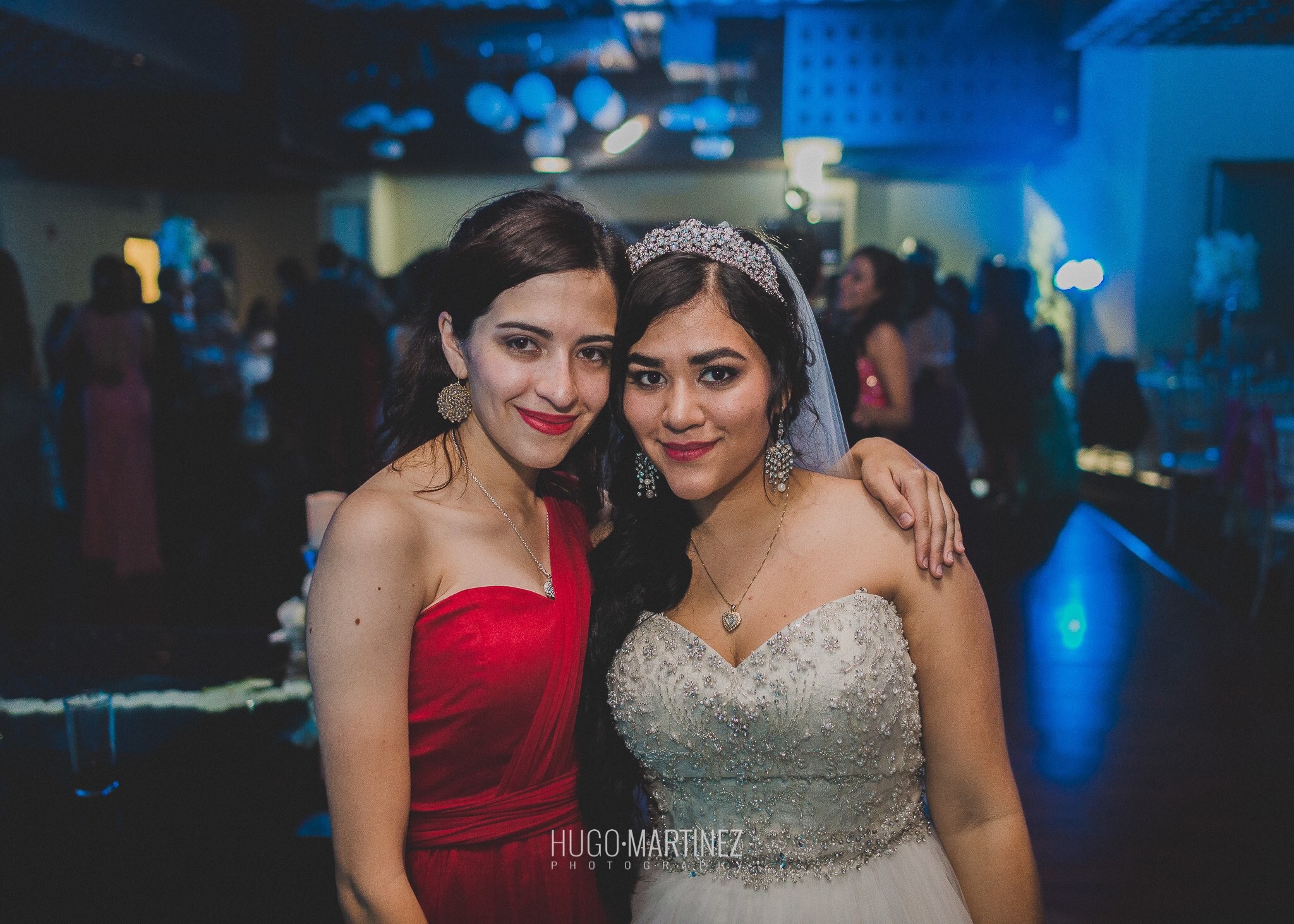 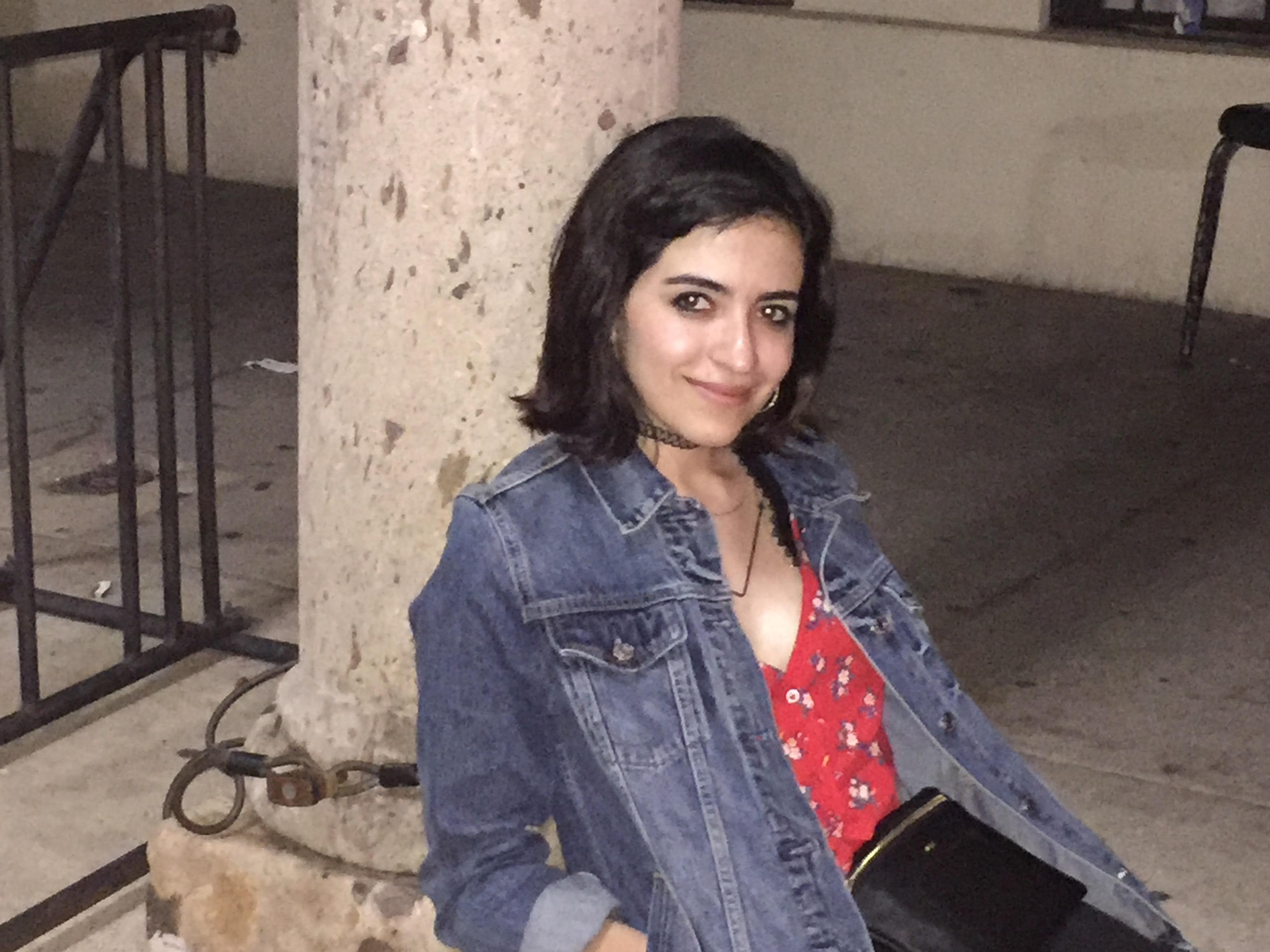 There are some unusual aspects to the shot. The shadows on the left face make it look like a strong flash from the left side (notice the nose shadow is photo-right of the nose). On the other girl there is a more gentle lighting, seemingly from above and maybe a bit to the right. Notice the fingers on her shoulder, and in particular the round pearl on her left (photo right) earring. There's virtually no shadow there. It's possible this was natural light and not flash, and they were under separate fairly directional spots, but that seems unlikely.

My first reaction was that a combination of harsh lighting, hair pulled back, heavier makeup and a short lens has seemed to lengthen the girl in red's face; the lighting in particular making the nose look longer.

But there are a lot of portrait processing programs which will change the structure of people's faces - making them longer or changing the shape of nose, lips, etc. Portrait Professional is an example. Many of these, by default, do change facial structure in addition to clearing up skin, cleaning up hair, etc. all by some programmer's definition of "beauty". Women (and probably men though it seems less frequently done there) rarely seem to like their own face changed around, even if other people think it an improvement.

It seems possible that such a program was used on both girls, creating both a distorted view of them (relative to reality) and some changes in lighting.

One other aspect that points to some kind of manipulation is the girl in white's left (photo right) arm - the right side just fades out, yet clearly was well within the DOF of the shot. Could be some ill-applied brushed-in darkening of the background.

I would be just guessing, but I think there is some manipulation of some sort going on, probably a bit too short of lens, and poor lighting.

You could always ask the photographer, or for that matter if they do not like the editing, ask to have it redone.

Part of the difference is the hair pulled down tight behind the ears vs. brushed loosely over the ears. Her head is slimmer when the hair is pulled down tight. Strong lighting from the side also tends to make faces look slimmer as part of the off side is lost in the shadow.

The closer shooting distance with a wider focal length also tends to slim the face at the expense of enlarging the nose and distorting other facial features.

The splotchy skin is likely a result of mixed lighting sources with different color temperatures/white balance. Or it could be the result of overaggressive use of the HSL tool to remove a color cast.

Avoiding a blotchy skin appearance is about ensuring your color is not too cold/blue, through lighting and/or white balance, and ensuring your lighting is diffuse enough.

And as mentioned, reflected or diffuse light is better than point sources of light. In this shot there definitely is some diversity of light source, and at least it's off-axis, but you can see from the shadows on their necks that it is still fairly crisp. Bouncing flash might have helped - in some situations it can be challenging, and done poorly the result can be poor, but it's worth a try.

Not the answer you're looking for? Browse other questions tagged lighting features or ask your own question.

15
What are the pros and cons of using an optical trigger for external lighting?
16
What is the inverse-square law, and how does it apply to lighting for photography?