How to let sunrays be a point of interest in a landscape photograph? 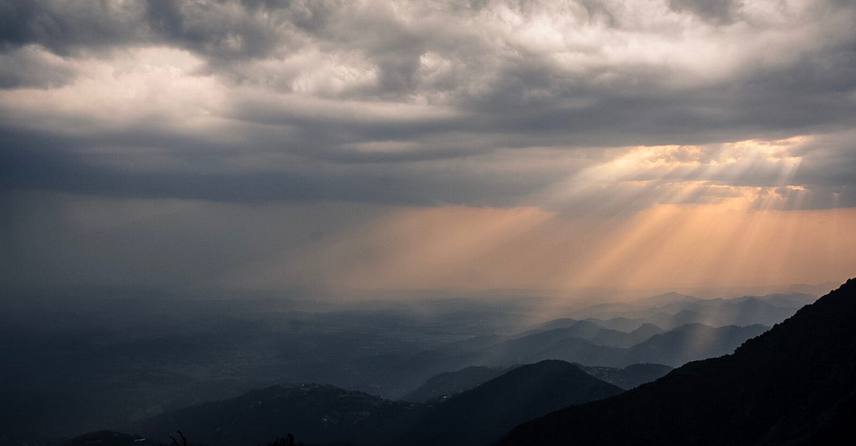 I was told by the photographer that he intended to make sunrays as point of interest.

The truth is that climate elements its a combination of luck and persistence. But sometimes the second is not possible.

Yes, the sun rays are the point of interest.

I think two things can be done in this situation.

This is a typical example where tone mapping helps to add drama. (I overdid the effect. It is only to illustrate the point) 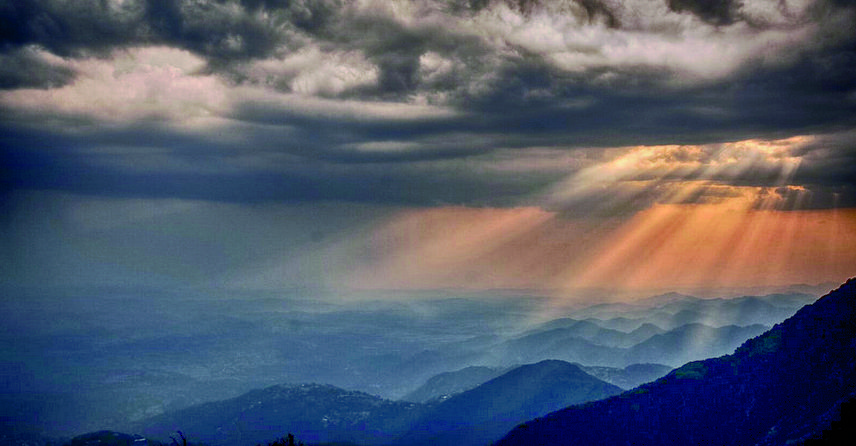 But if we go back to the shot itself, we have a similar case (where I made this recommendation) the framing is not optimal. So you can benefit from the rule of thirds.

We have a forced crop. Probably this works for some editorial purpose but feels in my opinion forced.* 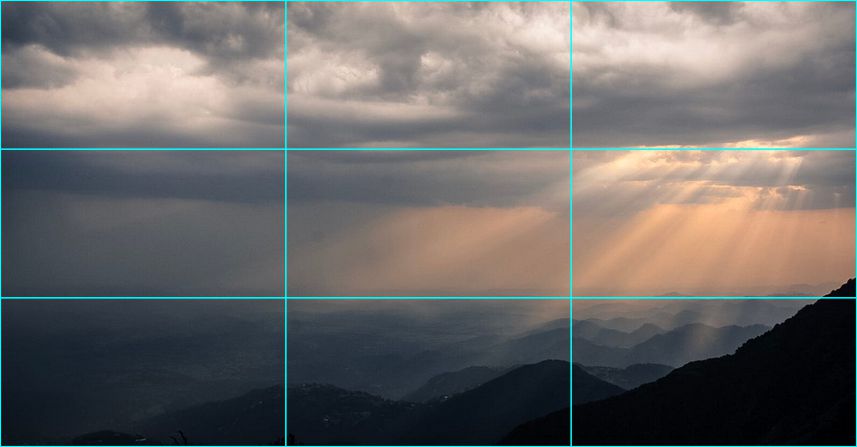 If these rays were framed a bit different they pull more protagonism. 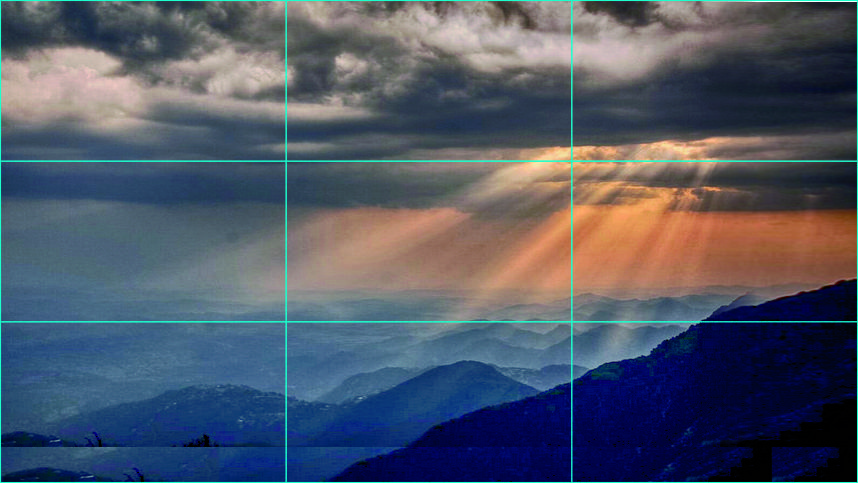 *An explanation about forced crop. The first mountain is also a point of interest.

The mountain on the right has some weight. Add that to the fact that the rays are on the right this makes me the photo is a bit unbalanced. 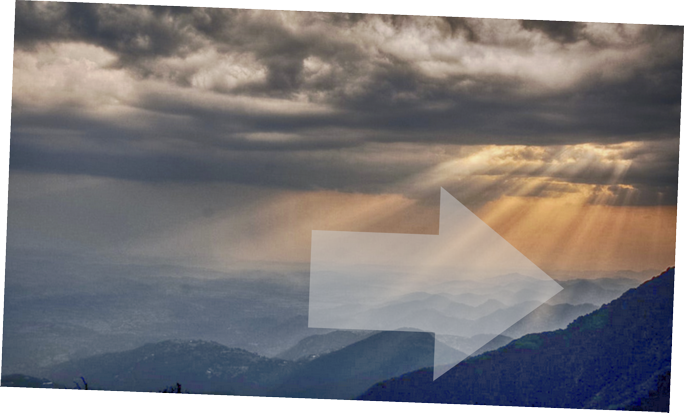 I will assume that the initial photo was a proportion 3:2, so there is a chance something else is below the crop, where potentially the landscape could "rest" to make the overall image more relaxing. Probably yes, probably not. 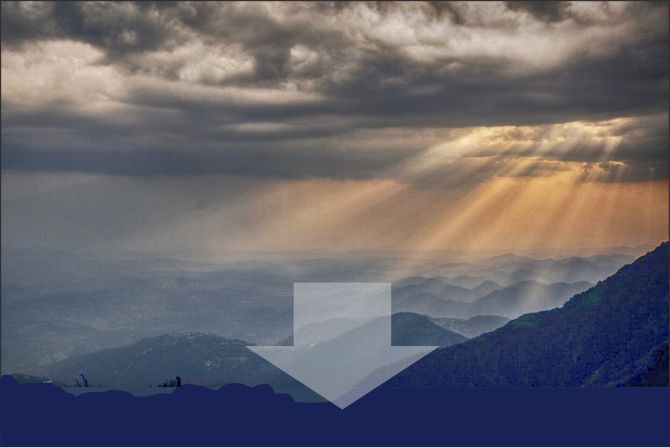 But let's say the 3:2 proportion was not the case. Simply following the horizontal composition, in this case, the rule of thirds, the horizontal proportion looks cropped to the right. There is a chance there was something interesting happening on the right. Probably yes, probably not.

In both cases, bottom and right I personally have the sensation something is missing. That is why I feel the crop is forced.

That's the way it goes with art. This photo doesn't appeal to you. OK. I happen to like it, although something about the color balance bothers me a bit. The clouds look to "dingy" somehow, but that's just my personal reaction to this photo, which is no more right or wrong than yours. 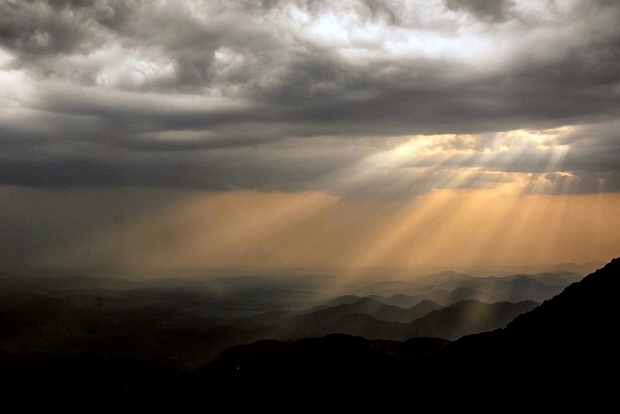 I cropped off some of the left because it didn't really add anything, in fact diluted the impact of the sun beams, which is one of the two main features. The other main feature is the clouds. I balanced the white parts to make them white and brought down the black level to make the contrast in the clouds stronger and a main feature. The ground is only there to provide a reference and a contrast to the sky features. Making it darker also makes the weather look more powerful and more interesting.

Of course these are just my own artistic interpretation and preferences. I rather like this picture, particularly my adjusted version, but it's perfectly OK if you don't like it and feel it does nothing for you.

Always remember that Photography is Drawing With Light. People see the world first not through colors but through light.

Sunrays can absolutely, and I think quite successfully in your example, be a point of interest. They simply need to have enough of a mass and contrast from the rest of the image to be visible.

If we analyze the image we can see the brightest portion is in fact the light. This is what draws the eye in.

If we analyze the Photo we can see very clearly that areas of the sky along with where the sun rays begin is the brightest portion:

If we in turn wanted to further strengthen the decision to make the rays the focus area we could further brighten them or darken the rest of the sky so that the rays really show up first:

And then as long as there's sufficient contrast between the beams and whatever they're in front of to give shape than it can absolutely be a strong point of focus.

Now please note I'm not saying this is, or isn't, a great or even good photography. I am only speaking about how Sunrays can absolutely be a point of interest.

11
What is a point of interest in a photograph and where is it lacking in this candle picture?
4
How do you photograph sand dunes?
5
How do I take advantage of a tablet to compose better photos?
6
How can I make a picture like this one of a bridge in green landscape seem less plain?
3
How to break mental models when taking pictures?
4
Where should I focus in landscape photography?
1
What colors should be preferred for clothes of a person when the aim is to put the person in the picture just for creating a point of interest?
3
Automatic identification of lucky images for landscape photography