what does RIH mean in an MTF chart

I've read some guides to interpreting an MTF chart, but I can't find any information about the meaning of RIH. My thought an MTF chart would show line/mm curves, so what are these F1-F9 RIH T/R values? How can I make use of them to understand the sharpness of the lens? 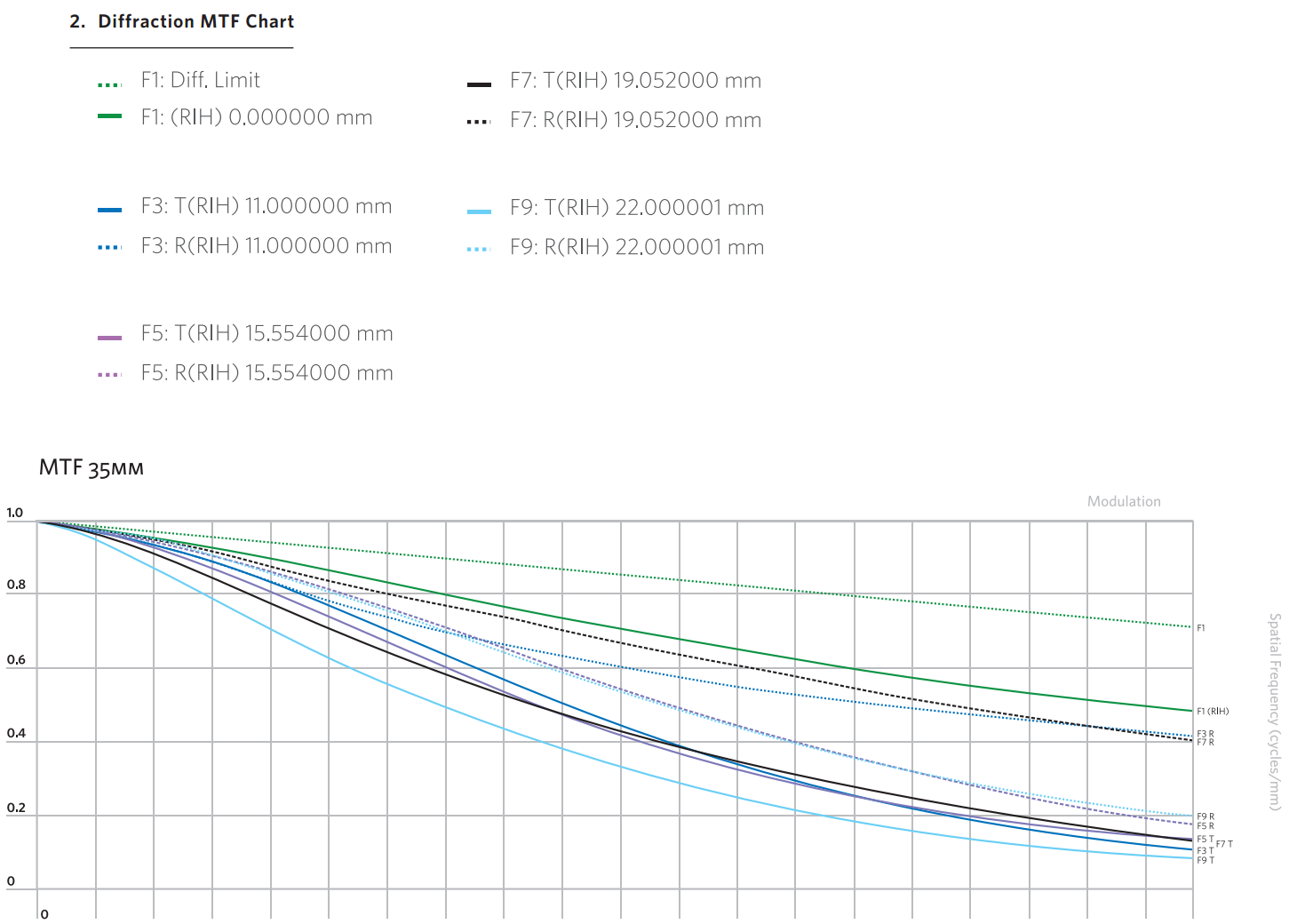 A link to the full spec sheet

If one looks closely at the document, one can see that it might not be 'RIH' but rather it could be 'R|H' inside each set of parentheses.

Here is a crop of the linked pdf: 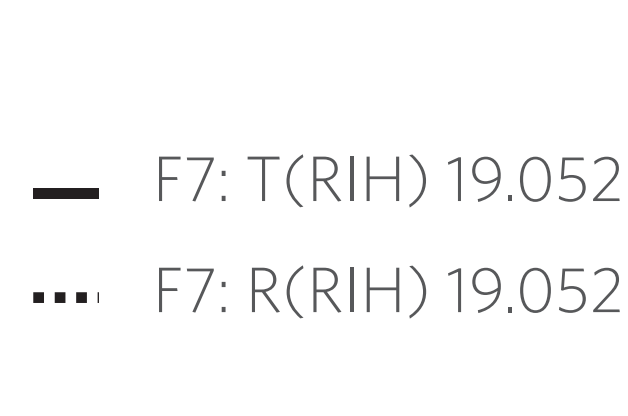 And another crop viewed at exactly 100%: 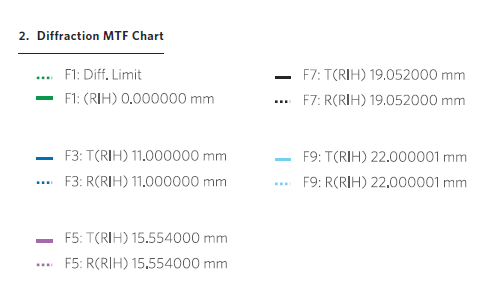 The source document linked in the question is from a company, Lomographische AG, based in Vienna, Austria. The official language of Vienna is German. R|H might be an abbreviation of German words that don't come up in an English google search, but I can find no reference anywhere to 'R|H' or 'RIH' coupled to MTF measurements. Since the size of the measurements are rather large, ranging from 0mm to 11mm to 22mm, and the distance along the diagonal of a 36x24 mm frame from center to corner is 21.633 mm, my guess (assisted by @scottbb's observation) is that the measurement in millimeters is for the distance from the center of the lens' optical axis where it intersects the camera's image plane to where each curve was measured.

At first I thought it might be the height of a specific test pattern referenced as 'R' (in much the same way as a pattern is presented in various sizes on other charts like the USAF 1951 standard chart), but a closer examination of the charts in linked pdf prove this to be incorrect. If that had been the case, 'R|H' would have been the designation of the height of the various sizes of the 'R' pattern on the test chart used.

USAF 1951 test chart, which uses a number system to designate different sizes of of the same test pattern: 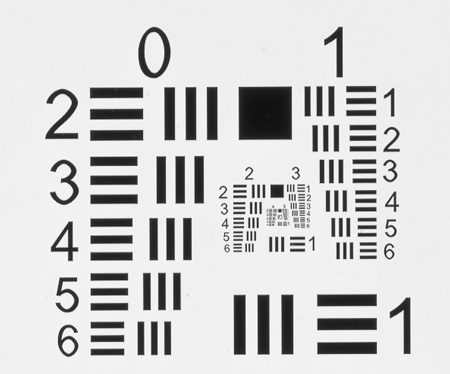 The 'R' or 'T' before each set of parentheses is for 'Radial' (most often called 'Sagittal' in English speaking circles) lines or 'Tangential' (sometimes called 'Meridional') lines (more below).

The vast majority of MTF charts don't exactly show lines pairs per millimeter (lp/mm) curves. What they show is the degree to which contrast is preserved when an imaging system is used to view a chart with a specific pattern that is a certain number of line pairs per millimeter. Roger Cicala explained it as simply as I've ever seen in a blog entry titled "MTF – The English Translation"

Now I’m going to show you the MTF formula without any math: MTF = contrast. We can make it just a bit more complex and more accurate without getting mathematical: MTF = blackest–whitest/blackest+whitest.

The rest of the blog entry is also well worth reading.

If pure black on the test chart has a value of "1" and pure white has a value of "0", then (1-0)/(1+0)=1. A lens that could maintain the same levels of pure black and pure white would have a theoretically perfect MTF of 1. No such lens exists. If the "black" lines in the image were only 70% of pure black and the "White" lines were 25% black, then the MTF would be (70-25)/(70+25)=0.47. For a more detailed mathematical explanation, please see "Zeiss: How to read MTF Curves." The curves referenced in the paragraph between the two immediately preceding quotes are the type covered on pages 20-23. But they are not the type of curves in the Lomographische AG document.

The curves in the Lomographische AG document seem to be this type of "MTF by Frequency" graph. Note the very light "Spatial Frequency (cycles/mm)" printed sideways to the right of each graph which should probably be placed along the x-axis at the top or bottom of the graph to make it clearer that the 0 -- 50 -- 100 scale on the horizontal axis of the graph is a reference to lp/mm and not to percentage of the distance from the center to the edge of the lens circle or camera frame.

With normal MTF measurements, contrast is measured in two directions that are at right angles to one another: sagittal/radial and tangential/meridional. Test charts orient the sagittal and tangential lines with respect to the center of the optical axis. Sagittal lines run along a line drawn from the center to the edge of the frame while tangential lines are at right angles to the sagittal lines. The resulting numbers show the resolution of the parts of a 'wagon wheel' shape where center of the frame is the axle hub, the sagittal lines are the spokes, and the tangential lines are the rim. Zeiss (see page 19 of the linked document) and many other testing labs use this system. Other charts orient the sagittal and meridional lines only with respect to a diagonal line running from the lower left to the upper right of the frame. The sagittal lines run parallel to the diagonal and the meridional lines run perpendicular to the diagonal. Nikon uses this system for their in-house MTF charts. Note that along the diagonal described above, both systems are the same. But the system used by Nikon measures only along this diagonal, while the system used by most everyone else also measures along other lines that pass through the center and averages the results from each line. Also note that most manufacturers publish "theoretical" MTF charts that are not measurements of actual lenses but rather what MTF a theoretically perfect copy of the lens design in question would have. In the case of symmetrical lens designs the theoretical MTF of a perfect copy of the lens design would be the same along any line that passes through the center of the frame.

Many charts show multiple curves. Each curve can be for a varying line pair frequency or line pair height/width as the image is tested from the center to the edge of the frame or each curve can be for the amount of contrast preserved at a single point as the number of lp/mm is increased. The charts in the Lomographische AG document linked in the question shows five such sets of the latter type of curves. There is a tangential and radial curve for each of four of the sets. Each set of Tangential and Radial curves seem to have been measured at a distance from the center of the frame designated by the distances indicated in F3, F5, F7, and F9. Since F1 was measured at the center there is neither a Tangential nor a Radial orientation to either of the lines. F1: Diff. limit seems to be an MTF curve for a theoretically perfect diffraction limited lens with the designated focal length. F1: (R|H) seems to be the measured contrast at the center of the frame for the number of lp/mm on the scale across the horizontal axis of the chart.

Not the answer you're looking for? Browse other questions tagged lens sharpness mtf or ask your own question.