How are 360° photos stored and processed?

While looking up 360° photos I found a lack of information about how the images actually work, I found some info suggesting that the images are stored as a regular jpeg but I was unable to find the finner details.

The questions I have are:

There are no finer details.

Let us start from the beginning.

You have a camera with a lens and the file stores what was projected on the sensor.

You can change the lens, for example to a wide angle lens and the file just do the same. No black magic there.

You can then store an image taken with a fisheye lens. The file itself has no idea and stores the image exactly the same way.

A file format has no way to differentiate what is stored in it.

A 360 image for start is one that contains information on what is around you. Behind you, in front, to the left, to the right.

The most primitive way to capture this information is taking a photo of a metallic reflective sphere. This contains information of (almost) all your surroundings.

What now has popularized this images is the ability for compute these transformations and unwrap them again.

So this simple Jpg with a distorted projection is projected into a 3D "solid" from the inside and then you see a section of it, and you can move arround.

This solid can be a sphere or a cube, depending on the aplication. (Cube is the most common)

How are 360° photos stored? Do they have a special file format or are they projected onto a regular png/jpeg?

360x180 panos are stored a number of different ways, but most commonly as a single image in the usual visual file formats (TIFF, JPEG, PNG) in equirectangular projection. Equirectangular projection represents the sphere as a 2x1 rectangle, where the cartesian X-Y coordinates correspond to the longitude and latitude of the point on the sphere. As a result, there's a lot of warping around the poles.

When displayed interactively, that equirectangular is most commonly used as the basis for either HTML5 or Flash output; the older Apple QuicktimeVR format was another standard, which used a cubemap rather than an equirectangular projection as a basis. Cubemaps most common are done as a 3x2 grid of the faces, or as a cross layout (e.g., Blender skyboxes and environment maps).

If they are projected onto a flat image will they lose quality in some areas where the spherical projection has warped the image?

Depends on how you plan to view and rewarp to another projection.

Are there any non standard ways for storing and processing 360° photos which work differently to the common methods?

Tons. There is no standard. And remapping is kind of a sport among those who do 360x180s. Cartographers have figured out a lot of ways to represent a sphere on a flat surface. :) Just looking at the list of Flexify mappings should give a sense of how many possible mappings there are. Some common ones you'll see are stereographic little planets/tunnels. But sky's kind of the limit. I like using drostified quincuncial when I really wanna screw with peoples' heads. 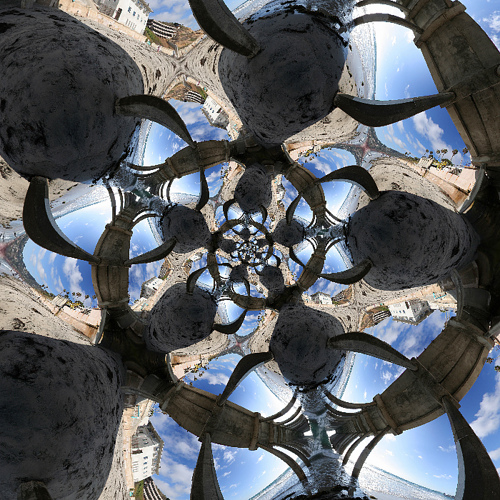 A lot of these images that are made for commercial purposes, e.g., real estate walk throughs, are either cylindrical or spherical projections, and the method will depend on the requirements of the hosting environment. Many of the online hosting services have propriatary software, and have slightly different requirements. Whether a cylindrical or spherical projection image is chosen depends on the marketing budget for a particular property. A spherical projection image requires triple the number of individual (pre-stitched) images as a cylindrical projection image, and so costs more to produce. The answer mentioning other (non-typical) projections is spot-on. It would be only a matter of working out the mathematics. Virtually any 3d space would be possible once the conversion algorithm is determined. (A projection on a Klein bottle would be an example that might prove more difficult!) Any Euclidean 3d space should be rather straightforward.

Not the answer you're looking for? Browse other questions tagged file-format 360-panorama or ask your own question.