How to compose such that the context does not overpower the subject?

Intention was to shoot a kid from a upper class family playing with bricks and sand in a not so clean area.

I have purposely not blurred the background. I think adding context is important in this case. However, I feel that the context overpowering the subject. Subject seems to be lost in bricks.

How to compose such that the context does not overpower the subject? 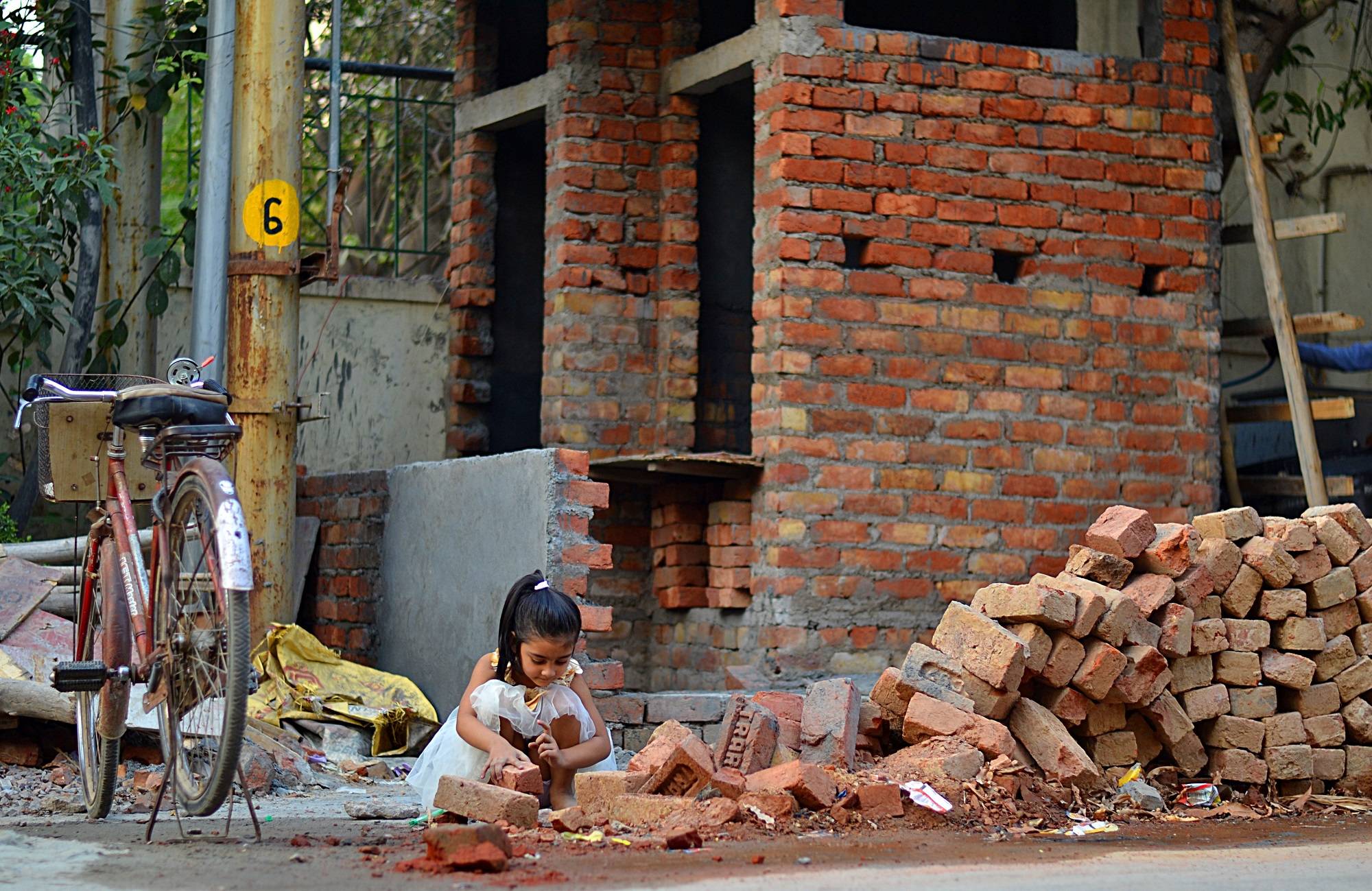 [Caveat:This answer reflects how I am thinking about photography, and it is "am thinking" because I may change my mind in the future for the same reasons I did not think this way about it in the past.]

I think there are (at least) two ways of shooting with a camera. One way of shooting is to express an artistic vision. Another way is what I think of as "shooting a crime scene". Photographs are often a mixture of the two. That is the case with the original image: 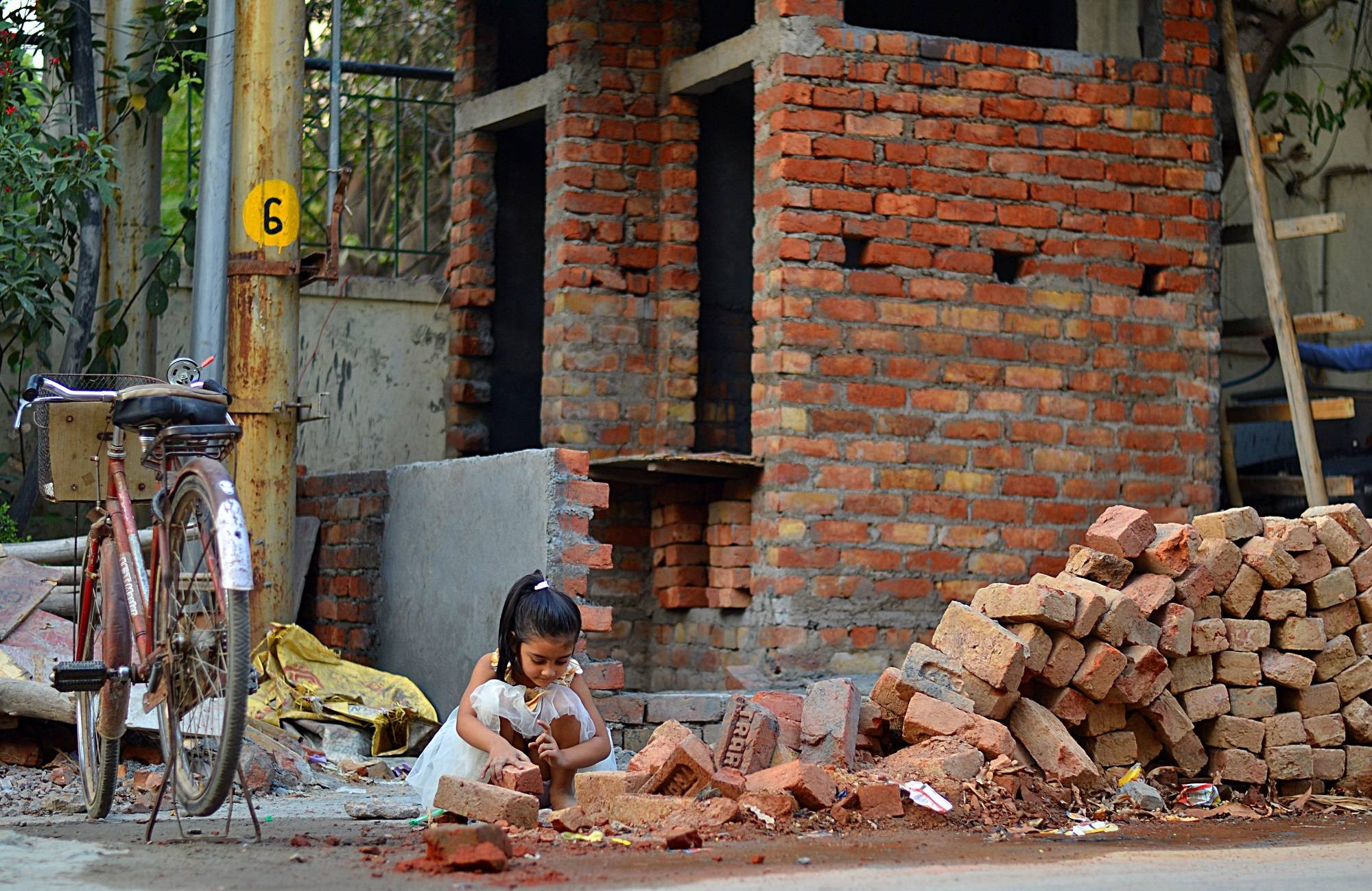 Because the question is about composition, the rest of this answer focuses on the artistic vision or lying in the digital darkroom. It's worth noting that this reflects my current limits on image manipulation. Other people's will vary.

Most photographs end at hard verticals and horizontals. These form a strong reference lines for the rest of the photograph. The photograph has strong vertical lines. Rotating the image to better align the verticals with the "frame" formed by the edges removes something that is "slightly off." 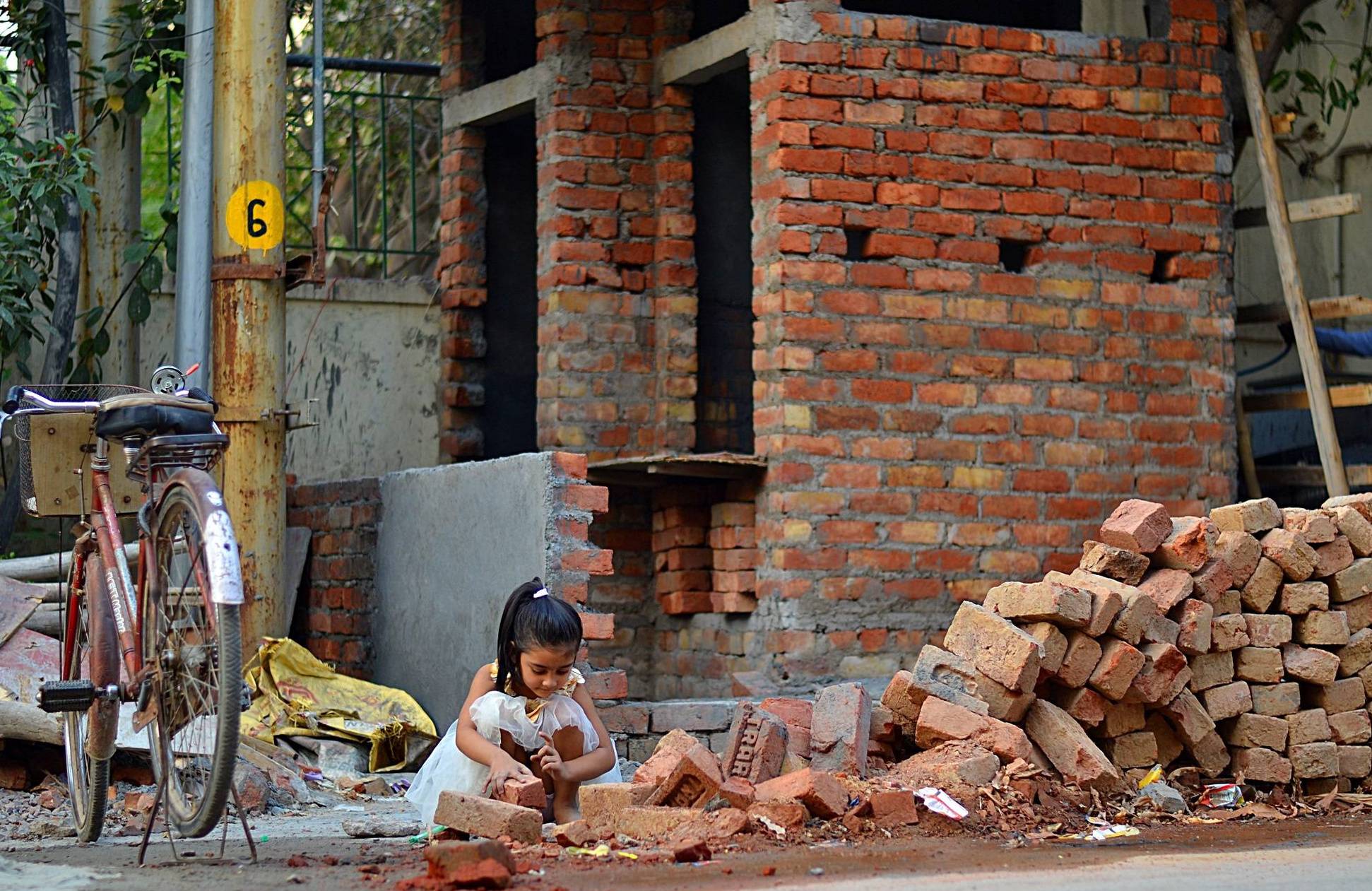 The price paid in this particular image is at the bicycle. Now it is just barely out of frame. Whether the price is worth paying or not is a matter of opinion.

Looking at the image in black and white is a way to examine the effect of relative brightness on composition. This helps when applying the digital darkroom equivalent of dodging and burning. This is the rotated image in monochrome: 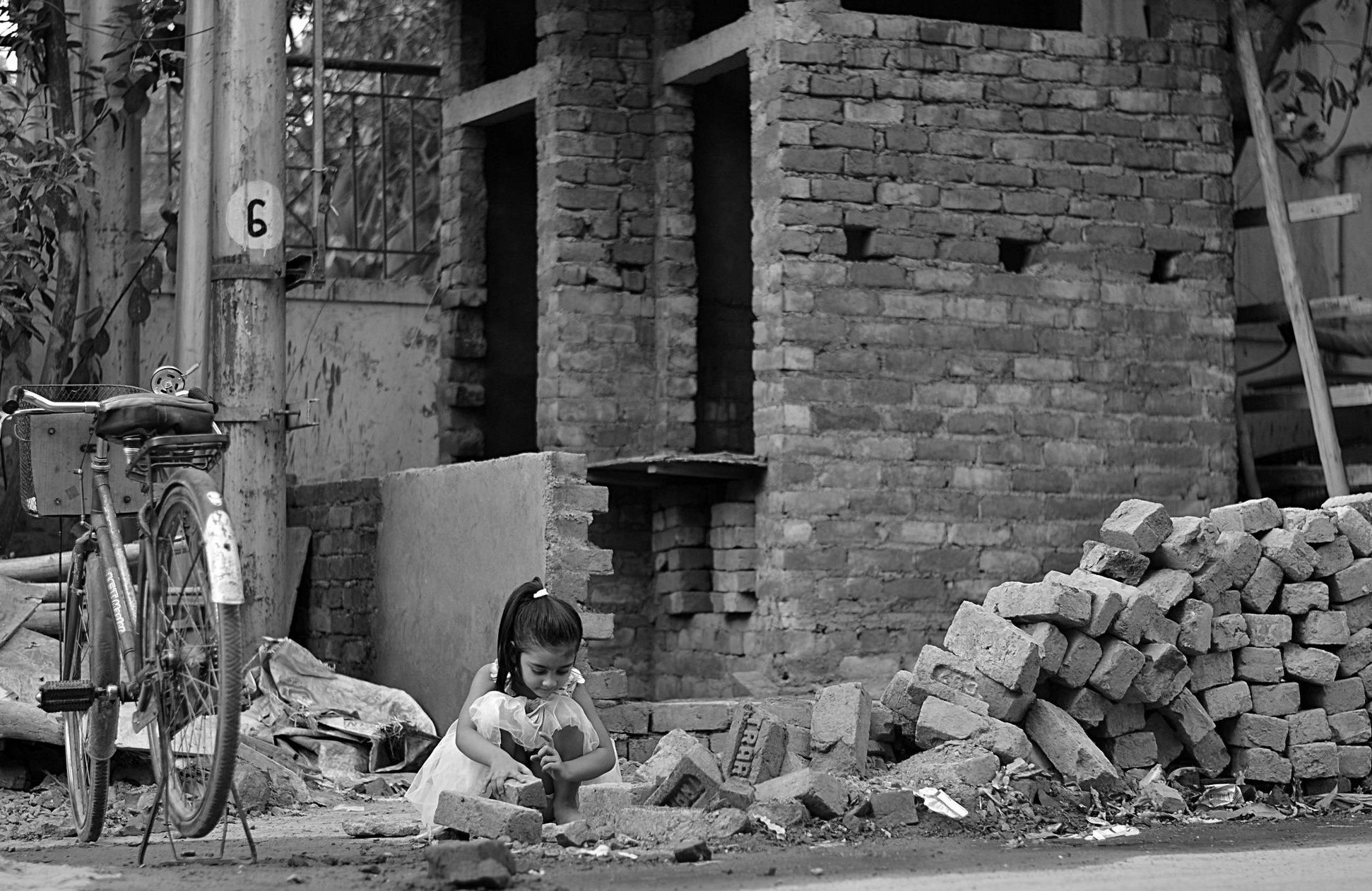 The most important part of the story is the little girl's fancy white dress. It's clearly the core element of the moment the photographer captured. Unfortunately, it is gray (the brightest element in the original image is the sky through the trees). It cries out for burning. 1 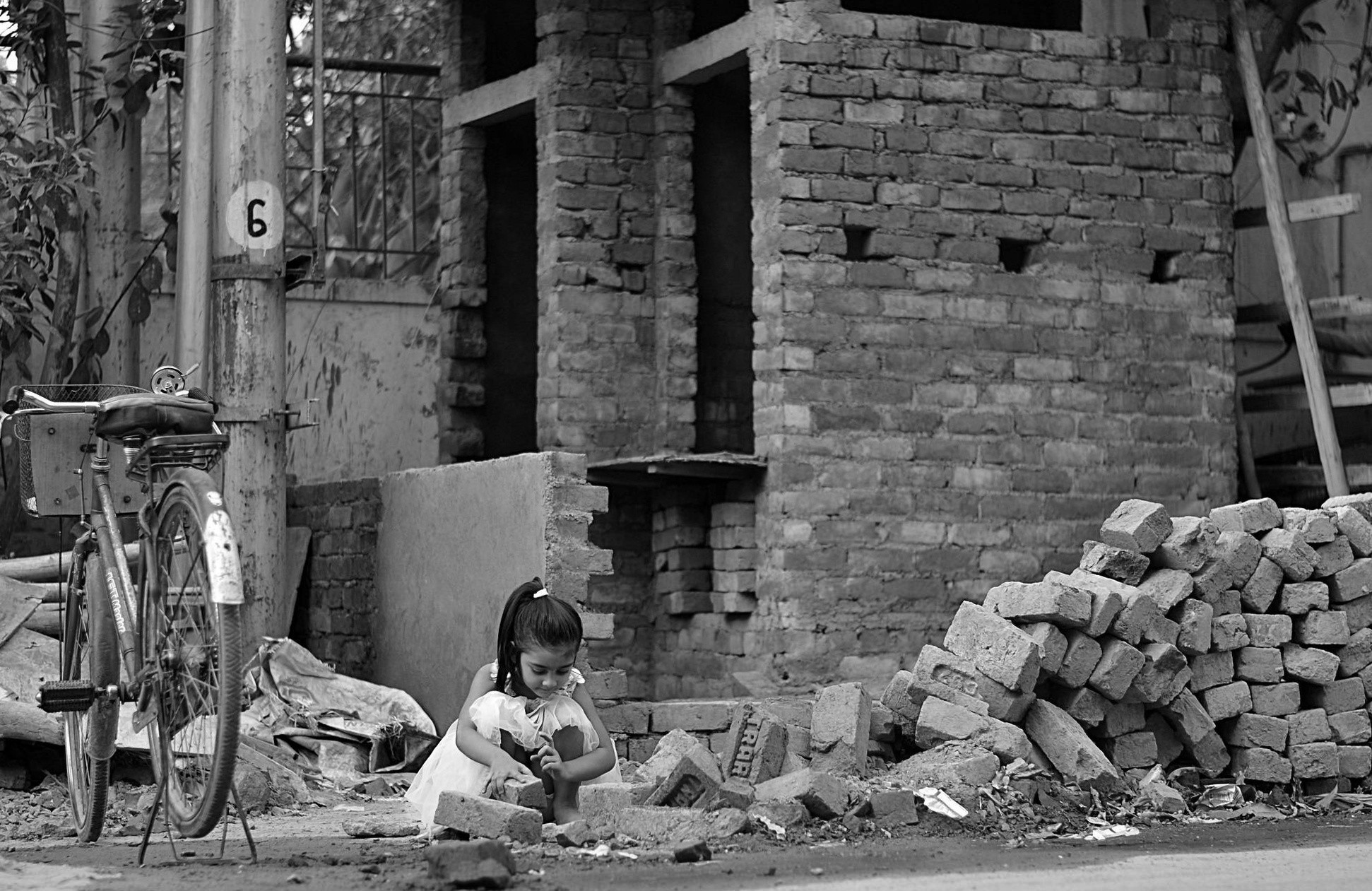 Once the girl's dress is bright, what should be darker? To me, pretty much everything that is darker than the grey point. The resulting image is a "darker print." The limiting element I used is the grey concrete slab behind the girl relative to her white dress, dark hair, and medium skin tone. 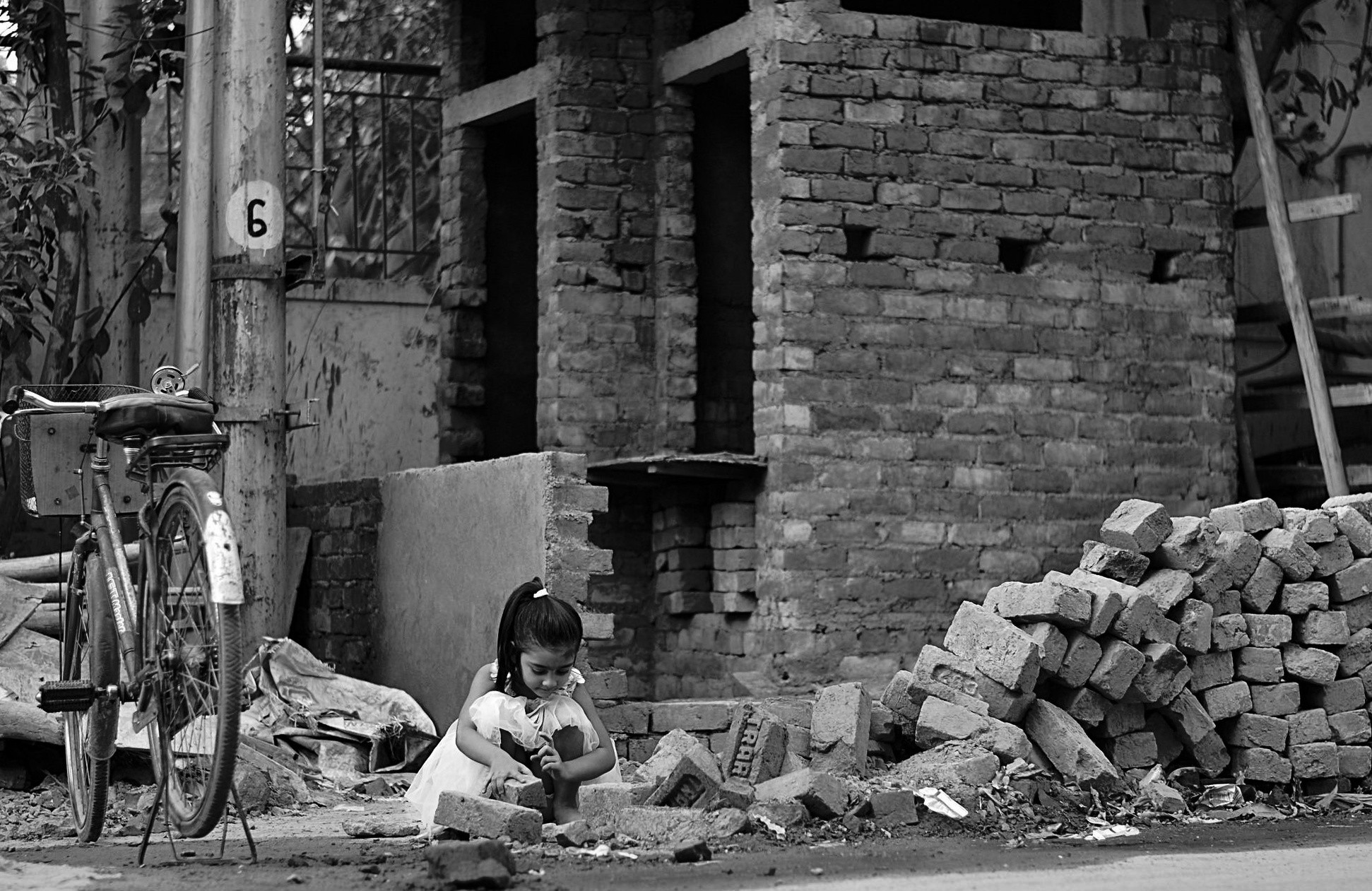 I like how it affects the color image, other people may not. T 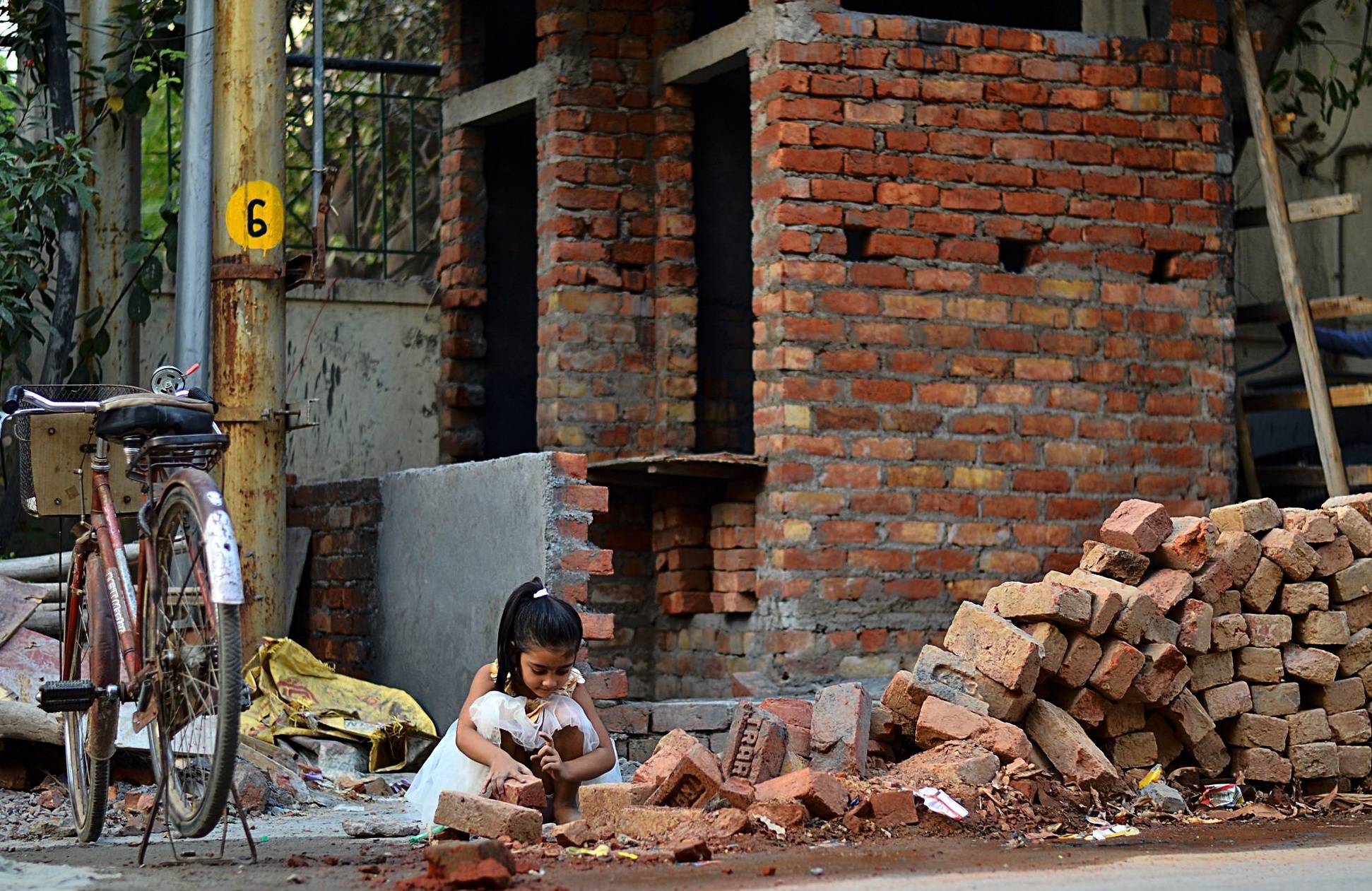 To me, the right edge of the image contains compositional noise. The diagonal board does not reinforce anything. The horizontal boards don't add anything either. There's nothing interesting there, so it can be cropped out 2. 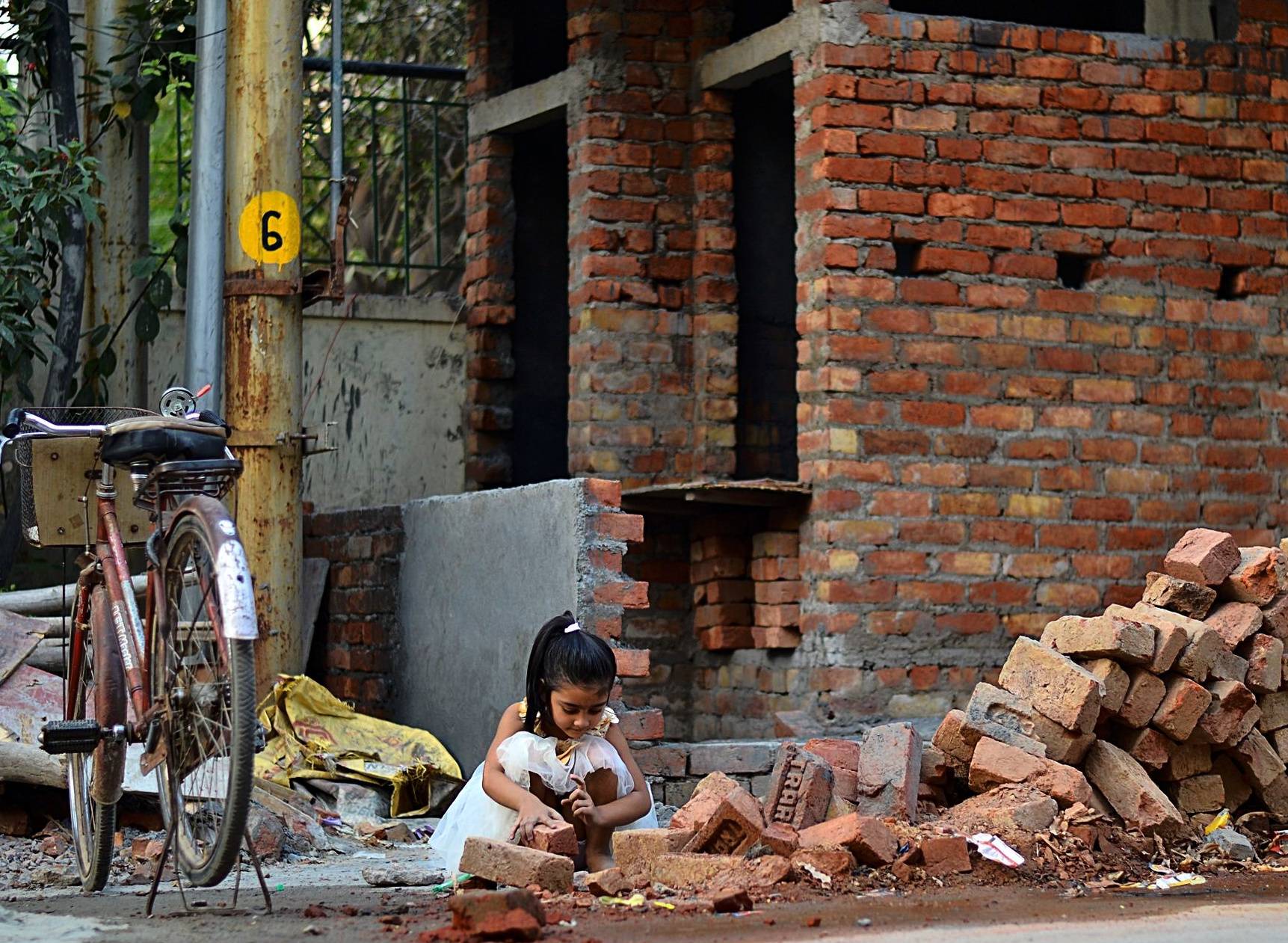 I'm inclined to push it farther and treat the bicycle and sign and trees as compositional noise. My intuition is that this is pretty much what caught the photographer's eye intially. The square format is also more consistent with the strong verticals than the original landscape format. 3 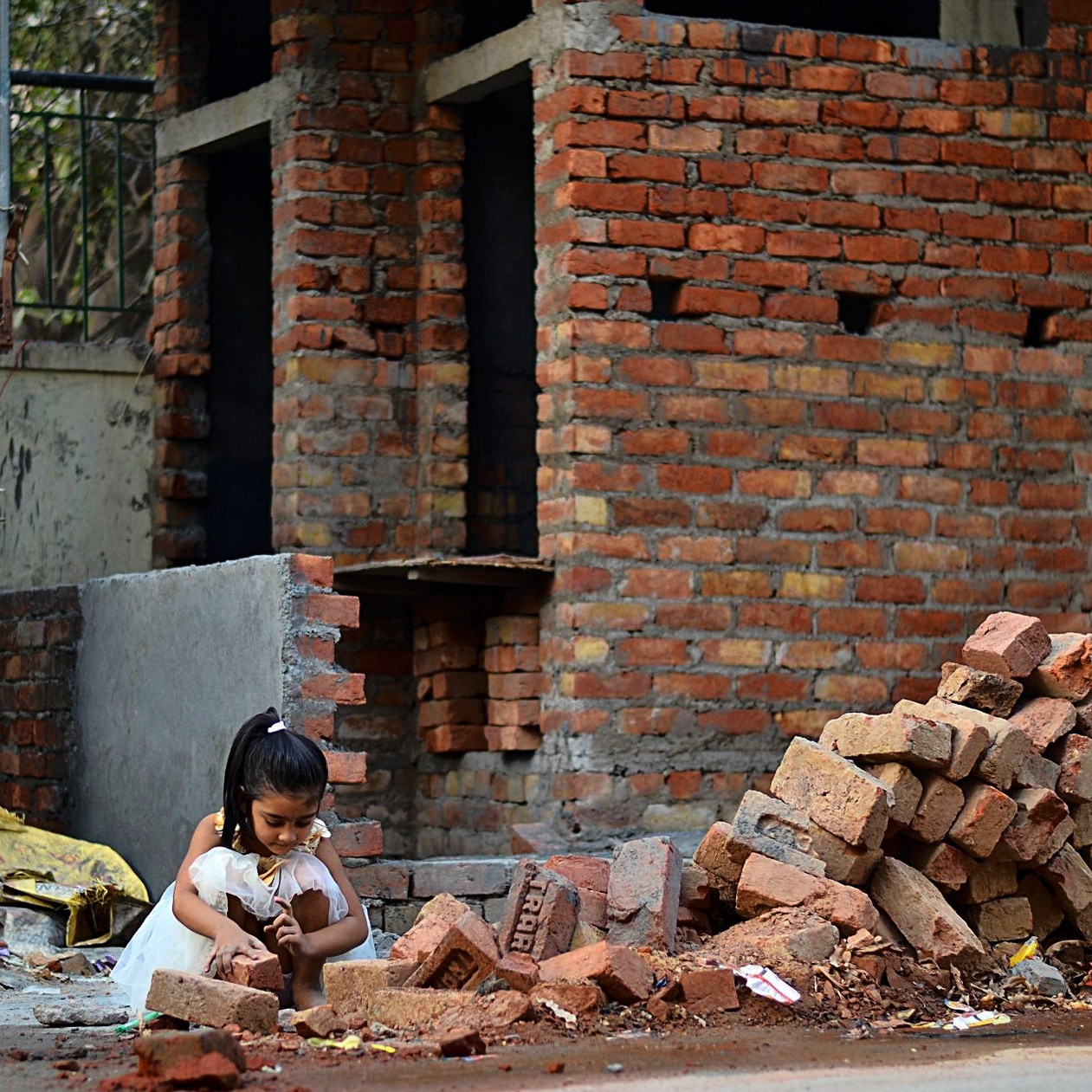 An alternate crop based on @mattdm's without rotation and to emphasize horizontality.

1] Technical note: dodging and burning were done with Darktable's "zone system" tool. Burning was done with a mask. Dodging was done globally based on luminance.

2] Technical note: The crop was made freehand rather than to a predetermined proportion.

3] and I like squares (maybe because my first camera used 126 cartridges).

Get closer to your subject. Let's see what she's doing, what she's wearing, how she's responding. That should be the first thing we notice without having to go looking for it (if that's indeed your intention).

As it is, she's kind of a secondary or incidental element in an urban landscape. The background is full of content and context, which affords you the luxury of getting closer without losing its impact. A little blur won't hurt either -- enough to provide separation but not so much as to obscure the environment. 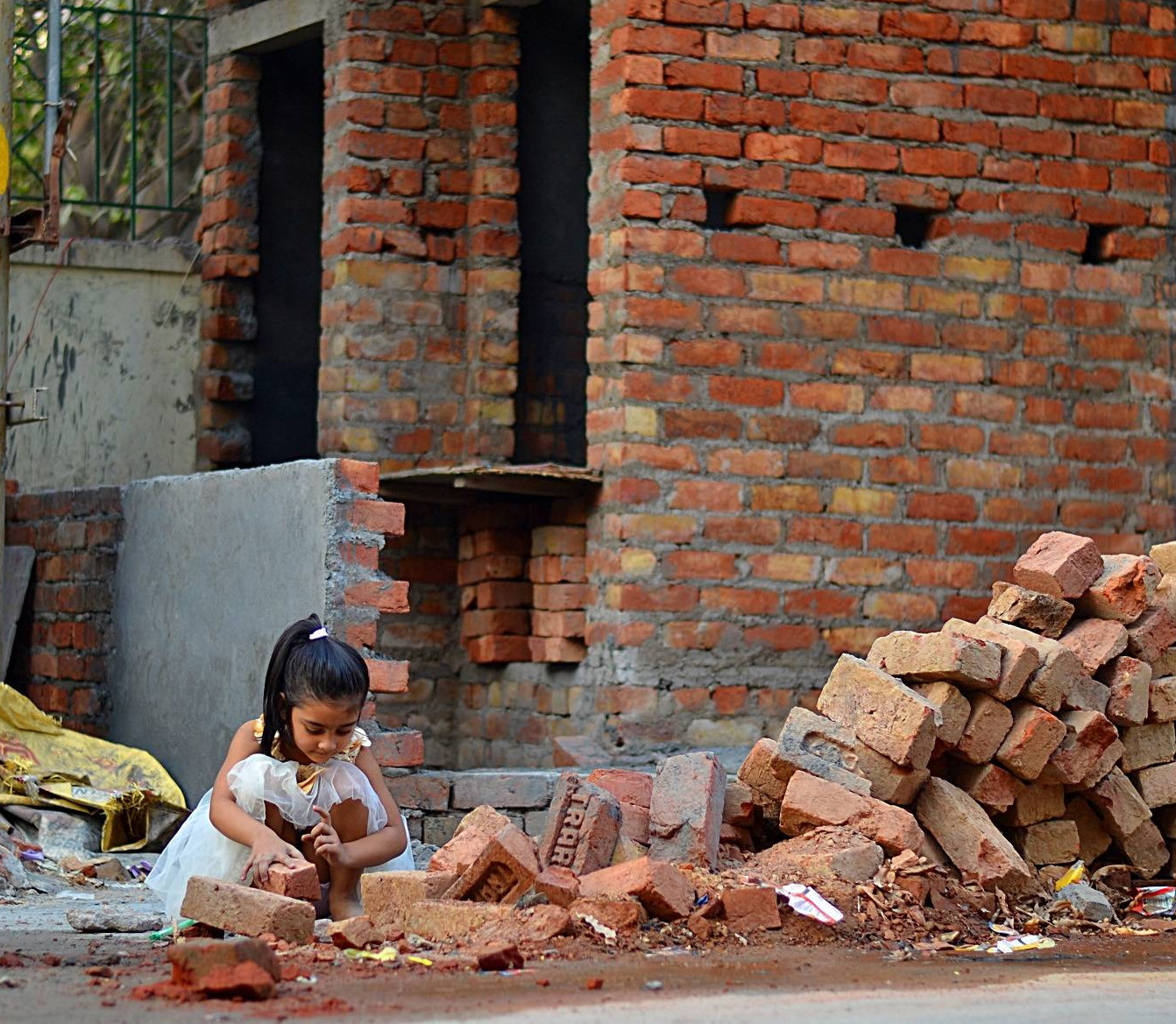 For me, it's a matter of seeing what else is overpowering your subject, and then finding a way to mitigate it or eliminate it. In this case, the white on the bicycle and its prominence in the frame overpowers the child's white dress. Moving to the right so that the bicycle was behind her, or to the left so that it's out of the frame might have helped.

But for me, the other main problem is lack of engagement with your subject. She's head down, you can't see her eyes, you can't really see what she's playing with or concentrating on. In this case, simply waiting and timing the shot for a more expressive moment, when her head is up, her hands are moving, or when she's smiling, or you can see her eyes, might also have helped draw the viewer's attention to her. It's just not a particularly expressive moment in telling the tale you want to tell.

The first thing to consider is the overall composition and framing of the shot. A useful rule of thumb here is the rule of thirds. Mentally divide the frame into a 3 x 3 grid (ie nine equal blocks), the eye will tend to be drawn to anything where the corners of the blocks meet.

Equally strong vertical or horizontal lines (ie the horizon) should lie close to the grid lines.

This approach is a simple way to create an overall balanced composition, the eye tends to move naturally between the crossing lines of the grid and will be drawn to a subject lying on any of the intersections.

In your original image the child and the bicycle are both in the foreground and either side of the bottom left focal point and so they are fighting for prominence.

Shooting with a somewhat larger frame than you necessarily intend to use and at the highest resolution your camera provides gives you more flexibility to adjust the composition by cropping.

There are no general rules for this sort of thing.

In this case, I think a tighter shot of the girl works better: 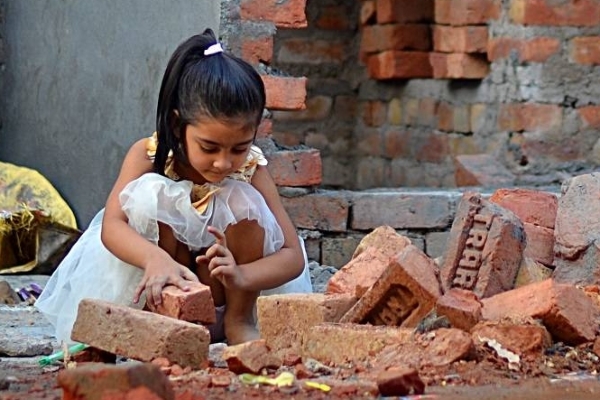 When you think about it, this still gives most of the context of the original. I also like that it leaves the viewer wondering a bit what is going on. The juxtaposition of the girl in a fancy dress playing with bricks in a grimy demolition site (or whatever) holds your attention. In a way, you don't want to "explain" more. Let the viewer see the contrast and wonder.

This question is probably "round 2" of this previous one My attention gets repeatedly distracted by the elements needed for the context in this picture. Where am I going wrong?

I am making a similar analysis, and I see that you are still not applying my wisdom XD

I must say that I do not think you should have to go closer. The timing is right and waiting one step would have risked the photo. 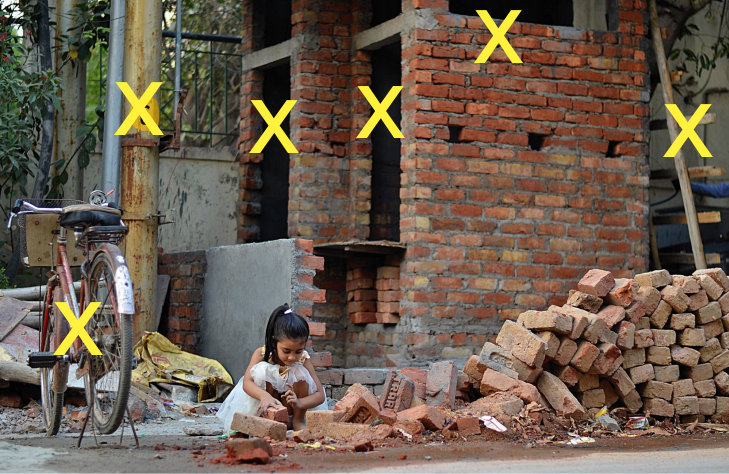 And again here is the rule of thirds applied to your image. And just as the other post, you have already made two cropping decisions, when taking the photo and when cropping it (you can see that it has not the normal 3:2 proportion). 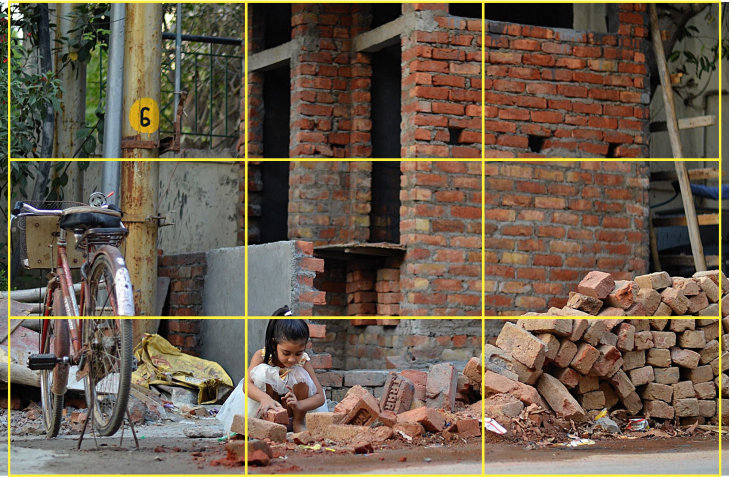 The distracting elements suggest us a new framing. I was tempted to entirely crop the bike but ouch. It also forces us to also crop the nice brick line. 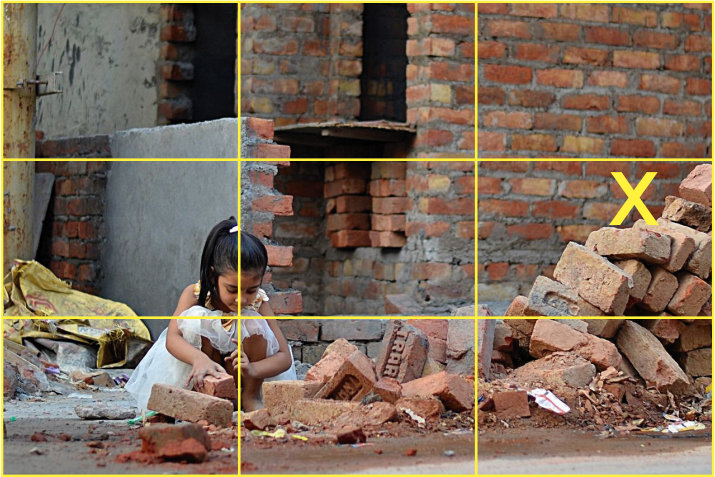 Leaving a bit of the bike frames the girl on the middle of a situation, and preserves the brick line. (This part is a bit subjective tho)

But you forced the photo too much. The point of interest is probably not the girl's face, but her actions and interactions, so we need a better framing on the shoot.

Don't be afraid to shoot a bit wider on the boring floor. 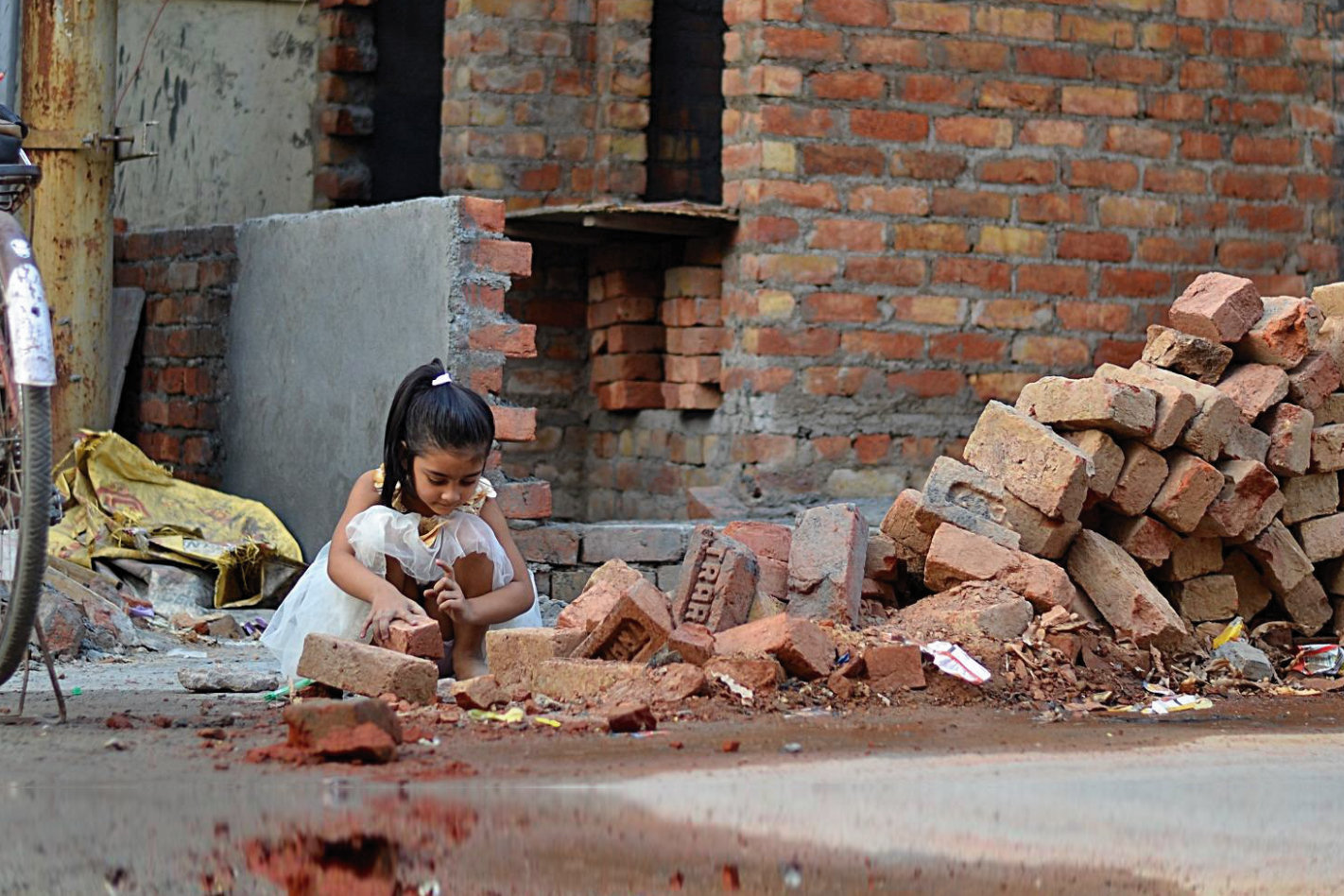 Of course, that is not the only framing or cropping.

I love that you are putting a lot of effort to understand storytelling in your photos!

Just pay a bit more attention to the rule of thirds. (or other composition schemes) They are your friends!

9
My attention gets repeatedly distracted by the elements needed for the context in this picture. Where am I going wrong?
0
How to set focus when subject is more than one object?

9
How to photograph an adult and a child together such that the adult doesn't dominate the scene?
4
How to compose outdoor group shoots to balance the subjects and the background?
12
When should the negative space not be used to bring attention to a subject?
0
How to shoot photo with the sun fully surrounding foreground subject
3
How to compose a scene when including the actual context isn't simply practical?
8
In which scenarios does it make sense to have the subject look straight into the camera?
9
How can I compose shots with tall buildings without boring sky dominating the image?
12
When are people or cars in photos not the subject?
4
How to crop macro plant/flower photographs such that they look somewhat abstract, not "cropped"?
2
How can a subject stay in focus if the shot is recomposed afterwards?