I am trying to practice aviation photography, I have a Nikon D3100 and AF-S VR Zoom-Nikkor 70-300mm f/4.5-5.6G IF-ED. When I take a shot at a longer focal length the subject (aircraft) is dark and I have to improve it by changing levels in editors like PS. I use A mode and camera set shutter speed and I set the aperture to f/9. 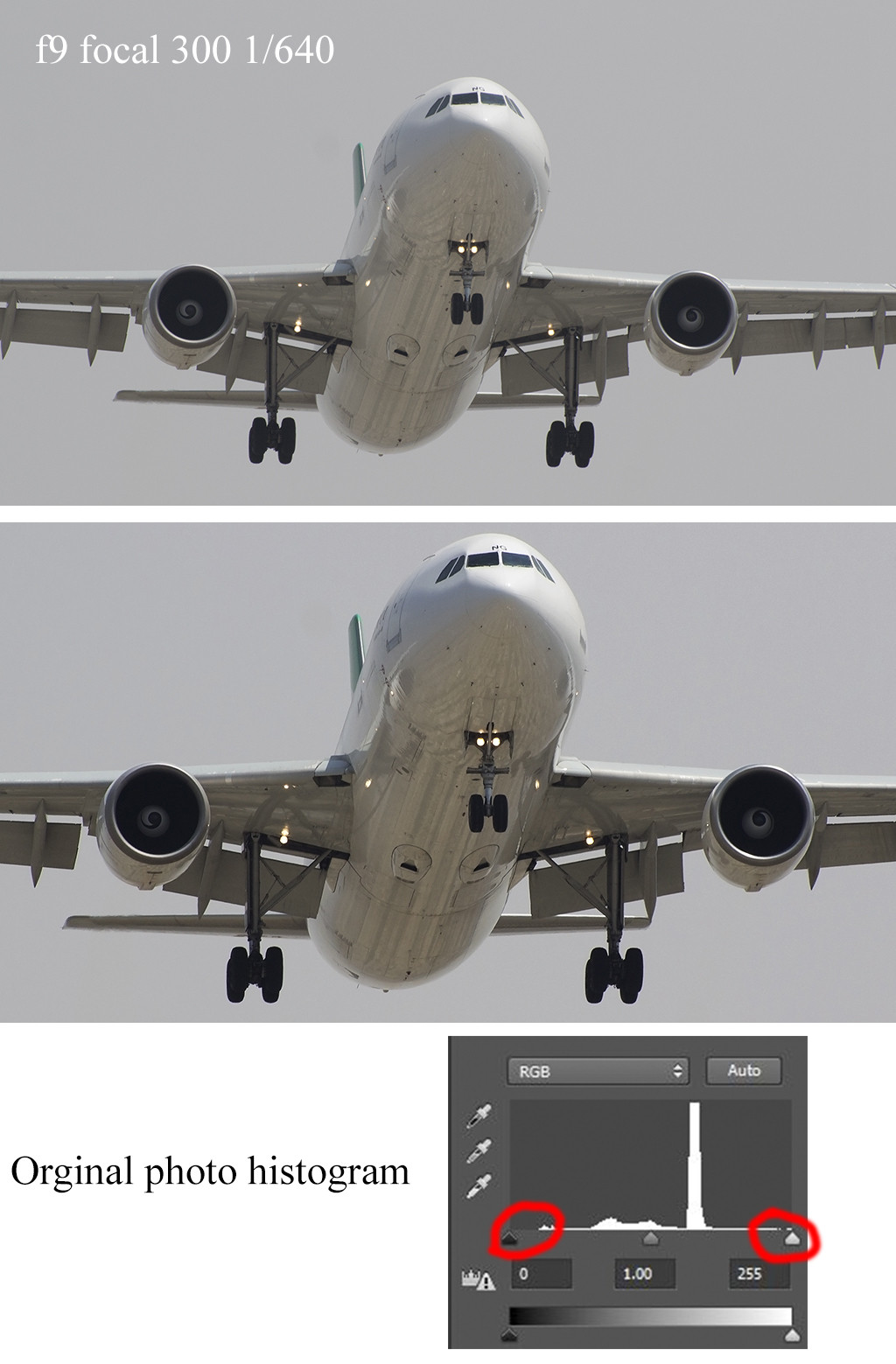 Use manual exposure mode. The aircraft is a very small part of the total frame that is mostly filled with a much brighter sky. Your camera's automatic exposure modes don't know that you want to expose for that one small dark object instead of the majority of the frame. It also doesn't know if that sky is supposed to be bright white or dark black, so it will try to make it as bright as a medium gray, just like it tries to make everything else.

One good way to set exposure is to meter on similar aircraft that are sitting on the tarmac and receiving the same amount of light, assuming a view of such aircraft is available.

Some folks might suggest using spot metering, but it's difficult to keep the exact center of the frame right on a fast moving aircraft.

Edit: Now that you've included examples the issue is clearer. The plane is larger in the frame than your question may have originally implied, but the answer is essentially the same: you need to control exposure instead of allowing your camera to control exposure.

The camera will try to make everything medium gray. It does this because it doesn't know if your camera is pointed at pure white snow or a black cat in a coal mine. It just measures light and calculates a value that will result in the frame averaging out to medium gray. Some cameras are getting pretty good at guessing better, especially those with RGB+IR light meters which use all three primary colors plus near-infrared to meter the scene and compare it to a library in the firmware that will probably be able to tell the difference between a bright blue sky in the top of the frame and dark green forest in the lower part of the frame. The light meters in older and many entry level cameras are monochrome and can't meter in color, so they have to guess even more and often get tricky situations completely wrong.

Your D3100 actually has an RGB (but no infrared) light meter. But with a bright sky and a bright white object even the best of metering systems have less to compare against.

In the case of a white airplane, exposing for it to be medium grey is about 1 to 1 1/2 stops to 2 stops underexposed. Either add some positive exposure compensation while watching your histogram to guard against a setting that blows out the highlights or, better yet, use manual exposure. After all, the sky isn't going to change how bright it is very much over a short period of time unless a storm moves in, in which case the plane may or may not be visible through the weather, or it is dawn or dusk when the light changes color and brightness rapidly.

Not the answer you're looking for? Browse other questions tagged exposure metering exposure-compensation or ask your own question.

11
Why are my sky photographs coming out dark?
4
Why automatic mode is worse than manual?

11
How do I effectively photograph when the sun is in the frame?
1
What is the quantitative relation between f/# of the lens (aperture), exposure, and ISO?
14
How can I think logically about getting correct exposure with flash?
9
Is it usual that a narrow aperture gives a darker picture in aperture priority mode?
10
Why would using higher ISO and faster shutter speed yield more noise than using lower ISO and slower shutter speed?
11
Why are my sky photographs coming out dark?
2
Why is the subject too dark when using auto modes on Nikon D5600?
1
Underexposure problem
2
Is my image exposure off due to shutter problems?