What do following EXIF values mean from iPhone 5 photos?

I have an iPhone 5 photo and there are some EXIF values I would like to understand better.

Specifically, I would like to know if the EXIF information can report the compass direction that the camera was facing when the photo was taken - and if the iPhone does this, does it do so for both front and back cameras?

The EXIF values I'm looking at that I think might be related are:

Is "CondfidenceLevel: 286" related to the above?

I cannot see any location information.

Could you please help me understand the above and whether these can help me determine compass direction?

Pitch, Roll & Yaw are the descriptions of the three determining angles for orientation in space; originally used for aircraft.

On an iPhone they're assigned as follows... 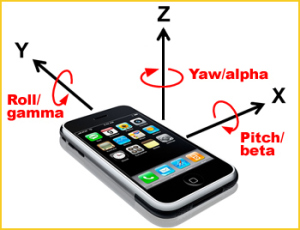 There's a question on Stack Overflow with some examples of orientation in space [& incidentally show the potential issue, known as gimbal lock, with using vectors to describe these rather than quaternions, but don't worry about that in this instance]

The figures in your data - 270° & 0° - are, however, just far too tidy to be real, imo, so perhaps it is only recording general orientation so a photo app will know which way round to view the picture.

That would be 'held it upright [portrait] with the home button at the bottom, & no information on Pitch, which might have given you the direction you were facing.

I'm sure I wouldn't trust it any further than that if you are trying to extrapolate an actual facing direction when the photo was taken, even if Pitch info is also in the exif somewhere, unless it is not a tidy number.

Having checked the exifs on a couple of iPhone photos, I'm guessing that data was actually applied by a 3rd party app, not the built-in camera app.

I compared one taken by a simple 'job sheet' app & one by the Apple camera app.
The first contained no GPS or orientation data at all.
The Apple app actually has a slew of positioning data, including GPS & direction

...which would be a perfect way to tell where my house is & which way I was facing... if I hadn't messed the data up a bit ;)

I found another StackOverflow discussion of EXIF and related data, in which an answer posts the complete structure underlying the EXIF data, including XMP code. Inside that blob,"confidence" is right next to "FaceID", which certainly suggests that those two are related.

This is speculation, because there doesn't seem to be much public information available, but the EXIF data I can find through Google which includes this "Confidence Level" includes it as part of a "Region Extensions" section which consists of (in some order)

It seems more plausible that the confidence level relates to the face ID (how confident is the software that it has found a face?) than to the angle info.

Not the answer you're looking for? Browse other questions tagged metadata iphone or ask your own question.

23
Is there any software which will set the EXIF Dates based on the file's modification date?
2
What do these strange fractions in EXIF exposure values mean?
3
What does fixed EXIF mean?
5
What do these six lenses in EXIF mean, for the iPhone 7 Plus?
2
What does Exposure bias in EXIF means? Fujifilm xt1 tag(0x9650)
1
What does the "Gain control" EXIF tag mean?
1
What are the "picture control" values shown in EXIF info from Nikon D5500
5
Calculating EV of an image file using its exif data
2
Should I care about duplicates with different metadata?