What kind of intervalometer do I need for taking long timelapses on my Nikon D7100?

I am looking to take time-lapses of more than one-thousand frames at an interval of 1 frame per second. What kind of intervalometer do I need?

Most intervalometers limit a specified number of frames to 999 images or less. However, many intervalometers will also allow you to set them to shoot indefinitely until the intervalometer or camera's battery is exhausted or the memory card is filled.

Most cheap generic intervalometers are based on the same internal components. They're a lot like cheap digital watches with respect to the way one sets and uses most of them is near universal. I have one branded as a "Neewer" that allows anywhere from 1 to 399 frames. But setting it just past 399 displays "--". When started with "--" selected as the number of frames the intervalometer will continue to take a frame at the specified interval until stopped by pressing the 'start/stop' button (assuming batteries don't give out or the memory card doesn't fill up first).

You just need one that has the proper connector to fit your Nikon D7100 that allows for continuous shooting until told to stop.

This one appears to fit the bill. It is cosmetically identical to the one I use, other than mine is marked 'Neewer" and has a Canon N3 connector on the end of the cable rather than a Nikon MC-DC2 type connector. 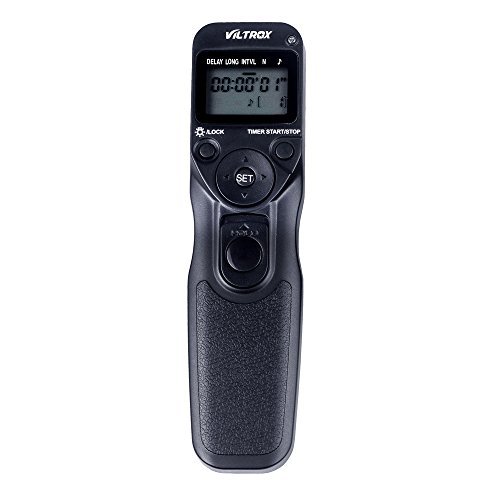 This one, this one, and this one all appear to be the same model. There are many others sold under various brands as well. This one came with several interchangeable cables that allowed using it with almost any camera with a wired remote port. For how one timer can work with so many different types of cameras, please see: Is there a good remote timer compatible with most Nikon and Canon (and Pentax and Sony) cameras?

Ignore the complaints in reviews on sites such as amazon.com about having to remove the batteries from such timers because you can't turn them off. They are like a digital watch: as long as the alarm isn't constantly beeping the batteries will last for years. In the case of the remote, be sure it is not running/counting down and actively trying to trigger the shutter periodically when you store it. You do this by setting the length and interval to "0" and the number to "1", then hold the 'lock' button until the "L" appears in the lower left of the lcd display.

It may (as in it likely won't, but it might) also be possible in a roundabout way to take more than 999 frames at (more or less) regular one second intervals with the D7100's built-in intervalometer. But based on what I've found, you will have to accept either an extra one second gap between each set of frames taken at each interval or a "shorter" gap between the last frame of one interval's set of shots and the first frame of the next set.

The trick is to set more than one frame for each interval, select S (single frame) release mode, as well as setting Custom setting d5: CL (continuous low) Mode Shooting Speed to 1 [1fps]. Setting Custom Setting d5 is covered on page 239 of the D7100 User's Manual. 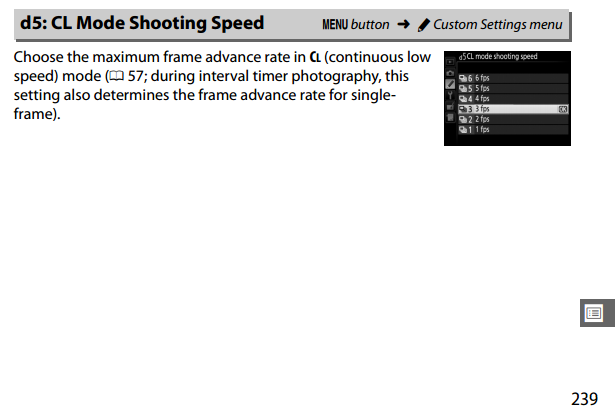 When setting up the interval session (covered on pages 145-148 of the D7100 User's Manual) select an interval equal to the number of shots per interval. To get the most number of frames, select a ten second interval with nine images per interval. Unfortunately, due to the time it takes to actually take the photo (mirror cycle + shutter time + shutter reset + saving to memory card), if you select a nine second interval with 9 images (and the Custom Setting d5 set to 1fps) the camera will probably have only completed 8 frames by the time the next interval arrives. You can experiment to see if setting 9 seconds X 9 frames or 10 seconds X 9 frames will give a more consistent one second interval between each group of frames.

Not the answer you're looking for? Browse other questions tagged nikon dslr intervalometer nikon-d7100 self-timer or ask your own question.

2
Is there a good remote timer compatible with most Nikon and Canon (and Pentax and Sony) cameras?

2
What can I use an intervalometer for?
4
Are Intervalometers different for standard Time-Lapse and HDR Time-Lapse
7
Where can I find a "bulb ramping" intervalometer which will work with a Canon T3i?
4
Is the Nikon D4's advertised frame rate for 14-bit capture?
2
What to look for in an intervalometer?
1
Is it possible to add an intervalometer to a Nikon D3200 with a replacement firmware?
0
Do I need an external timer for a long time-lapse with a Nikon D7100
3
What interval between photos is recommended for shooting meteors?