What factor does film speed play in developing time?

Have you read your developer/film manual? Usually if you are pushing film (ISO100 film shot as ISO400 for example) you need to increase development time. The relation is not linear and depends on film-developer combination.

For example, you can see how Ilford specifies its Delta 3200 development time depends on ISO setting that you used to shoot film ("meter setting"): 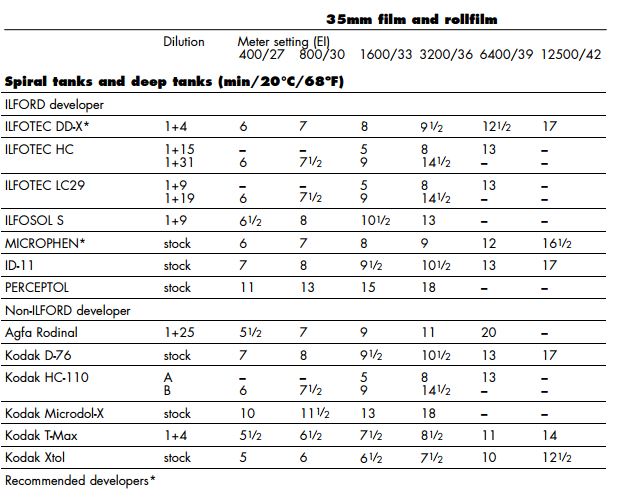 In practice, you should find out development setting that gives you the result you want, starting with manufacturer's information for your film.

It's not clear whether you're talking about pushing the film (exposing film at higher ISO than it's actual rating) or using films with different ISO ratings, but either way the processing time usually increases with higher ISO. The catch is that the recommended dilution ratio may also be different, and that also affects developing time. Black and white film usually comes with a data sheet (or it did the last time I bought some, anyway) that gives you the time, temperature, and concentration for recommended developers. You can also find a lot of information online, like here.

Basically, when you develop black and white film, the developer changes the silver halide that has been exposed to light into metallic silver. The longer you leave the film in the developer, the further that reaction can proceed. Conversely, film that has been exposed to less light (as when you shoot at higher than the rated ISO) needs more opportunity for that reaction to happen, which means that you need either more time, more concentrated developer, more agitation, higher temperature, or some combination of those factors in order to develop the film. I doubt the the effect of any of those factors on the film is linear, so it's really best to start with a known recipe and work from there, adjusting according to your experience and preference.

If you're shooting film that has a higher ISO rating in the first place, that just means that the emulsion is formulated to be more sensitive and therefore requires less light for a proper exposure.

10
What options are there for inexpensive 35mm film developing and digitizing?
15
Pushing film while stand developing?
3
Can I use chemicals for developing ISO 400 film to develop ISO 100 or 200 film as well?
4
Overexposing and pushing in a roll of film, can they compensate each other?
6
What are the effects of developing film with an expired developer?
1
On B&W film dev charts, what do different ISOs mean?
4
How should I calculate push-processing for C41 in B&W chemistry?
7
How do different developing fluids affect black and white film?
2
How many minutes should I develop Ilford HP5 in Rodinal 1:50?
1
Why does a monobath work well for films that usually have significantly different process times?