does the presence of Moiré in a photo implies the "lens outresolve the sensor"?

I sometimes come across affirmative comments such as "there's moiré in the photo so the lens out-resolves the sensor".

But is it true?

I would say: moiré in a photo isn't a sufficient indication that the lens' resolution is better than that of the sensor.

First one should define in which condition lens resolution is considered. A lens isn't a sensor, it doesn't have fixed sized sampling elements. So from that point of view there's already a source for confusion and imprecision: lens resolution relates to notions such as circle of confusion, Rayleigh limit, Airy disk, it is most often defined by the lens' Modulation Transfer Function (via MTF curves), at given location within the field of view, setting of the lens (F/#) and light wavelength, etc. But for the sensor itself, resolution is mainly directly related to the dimensions of its sensing elements (pixel size), which is constant (source of signal degradation at the sensor level, such as noise, are not considered for the discussion).

Already we can foresee that saying a lens has a better resolution than a sensor is an incomplete statement.

Second, a digital photo is the result of several operations:

(And there's a final stage, observation, which is using our eyes to look at the print or image on a monitor, and moiré can appear there too, but we don't consider that stage here.)

Moiré appears because of the presence of aliasing created at the sensor level from an object containing a periodic structure with a spatial frequency close to that of the sensor's sampling rate (simply put, its pixel size).

While the primary origin of Moiré is at step 2 (the lens doesn't produce moiré by itself), it could appear at 3 (though modern demosaicing algorithm will try to minimize it), and its characteristics could be modified by 4 and/or 5.

What the high resolution nature of a lens implies is that it enables the periodic structure of the object to be imaged on the sensor with enough "sharpness" so that the structure doesn't appear as blur (or as having not enough contrast to distinguish its periodic structure).

Now imagine that a given lens/sensor combination produces moiré when capturing an object having a periodic structure, with the lens being known to have a resolution better than that of the sensor at a given setting. What if the lens is changed to one with the same focal length but with a resolution slightly lower than that of the sensor (or more simply, go from the sharp lens' sweet spot toward the lowest of largest F/#)? The lower resolution lens will diminish the contrast of the periodic structure of the object, it will not prevent the apparition of Moiré; somehow in a way similar to a sensor's anti-aliasing filter which can contribute to reducing moiré but doesn't totally eliminate it.

So it is possible (at least so do I think) that Moiré is present in the photo with a lens having a lower resolution than that of the sensor.

Conclusion: the presence of Moiré in an image doesn't imply the lens has a better resolution than the sensor. I welcome some light shed on the topic.

If the image on a sensor has a higher spatial frequency than the Nyquist limit for that sensor then you will get the Moire effect. It is for this reason that most camera sensors still have low pass filter elements to ensure that this doesn't happen. If you use a camera with a sensor that does not have a low pass filter fitted and you use a lens that can resolve at higher than the Nyquist limit for the sensor and you photograph an object with a high enough frequency pattern then, yes, you will get Nyquist artifacts from the undersampling.

Typically it is the highest resolution sensors which don't have low pas filters so it is not a common situation. A simple solution might be to defocus a little.

Your language is a bit off: the resolving power of a lens is universally understood to mean the resolvable image components, so it is completely acceptable to discuss, define, etc. a "lens resolution." A common example is to use an Air Force res target , manually focus as best you can, and see what line-pairs the eye (or the eye plus a magnifying glass) can resolve on the image plane itself.
But, yes, the net resolving limit for your photo depends both on the lens MTF and the pixel size, or grain size & density for film.

As to your question about producing moire patterns when the sensor has higher resolution (resolvable line pairs) than the lens: I'm skeptical that that's possible, since an optically blurred image can't be sharpened by using more pixels. You'll just get a better final image/print of the blur itself.
Note that you might get a chromatic aberration which appears vaguely like a color-moire pattern, but that's a different animal. 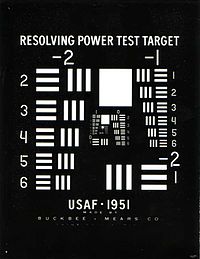 Not the answer you're looking for? Browse other questions tagged lens sensor resolution moire or ask your own question.

9
Can the slant edge SFR method measure lens resolution greater than the Nyquist limit for the camera sensor?
9
Is it possible for a lens to produce too much contrast?
9
What are the lens-mount benefits of mirrorless systems?
1
Do you lose the increased sharpness of not having an AA filter if downscaling?
2
Is the anti alias filter really a blurring filter?
3
How close are digital sensors to "night vision" image intensifiers?
2
Large difference between number of image sensor pixels and pixels in the image from my iPhone
7
Can using a high resolution sensor and downsampling compensate for a soft lens?
1
Is 24MP actually matched to Full-HD Resolution when factoring in the differences on how pixels are defined?