I'm interested in watch photography but it's not something I've done before and wanted some pointers before I started.

This is the sort of thing I'm talking about: 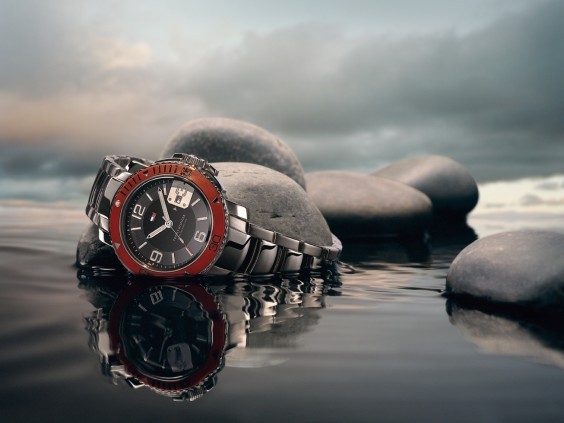 It's one of several images from this article.

I guess the first question is - is that watch actually IN water or is it a photoshop job?! I'm guessing it's in the water, so how do I set this up?

I have a light box thing and have shot a few macro product style shots in it with varying degrees of success. Would I be best with a light on either side and one above? Should I be using a macro lens and getting in close, or staying as far back as I can with a telephoto? Would a CPF help? I was going to fill a pan with water to set the watch in, how do I make sure I get the best possible reflection? I mean, what should I have in the pan (it's glass so do I line it with black, white, shiny etc?) The more I look at these shots, the more questions I have!!

I shoot a lot of product photographs and can assure you that producing such an image with intermediate photoshop skills is not particularly difficult. About the only thing that may have been actually photographed was the rocks, although I'm not even so sure about that. The watch itself looks like an industry-standard, decent quality render and the sky likely pulled from some bank of stock sky images. There are imaging services that will take a real product and will scan, photograph, and reassemble a product in virtual 3D allowing a customer nearly infinite compositional options for their product. In fact, this is how it's possible to take a diamond ring image and put it on a billboard three stories tall. They don't just expand a 20Mb file!

"Wrapping" the watch around the rock is trivial, as is building the reflection in the (fake) water.

In fact, the reflection is clearly fake....and a poor job at that: note that the reflected sections to the right of the face clearly mirror an incorrect angle. Also note that for a chrome finish, none of the adjacent rocks are reflected in the band. It's also worth noting how the water covering the watch face is not clear, but black....like used motor oil. Does water really behave like that? But that's what you want; actual and real reflections of foreground matter would distract from the point of the image: highlighting the watch....and only the watch.

Generally, building such images in photoshop is preferred as each and every element and layer can be precisely controlled to maximize the impact of the product itself. Composition can be easily rearranged, exposures and saturation adjusted, and shadows precisely created.

I'm pretty sure that the result is a combination of at least two photo editing tools. First, look at water and clouds in the pics. Seem a bit unreal? Usually this effect can be achieved by using HDR photo editors, something like https://aurorahdr.com I think this composition was shot without a watch and then simply edited. Afterwards they just added a pic of wristwatch. As it was previously mentioned, it can be a picture, not a real object. All in all, it seems the image has more to do with painting than with photography.

Not the answer you're looking for? Browse other questions tagged lighting reflection water or ask your own question.

3
How do I create a more natural look for watch photography using a Light Box?

5
How can I reduce "ghost images" of water droplets?
8
How to photograph glass without reflections and shadows?
10
How to photograph a bathroom for a commercial client
1
Simplest setup for photographing large woodflooring panels indoors
7
What could cause this visible artifact which seems to a be a glowing inverse of something outside of the frame overlayed on this photograph?
8
Avoiding reflections when taking close-ups of a wrist-watches dial
6
How to "NOT" photograph reflections on water
1
Other than camera and lens, what gear do I need for macro photography for stock items?
4
How to photograph in space with lots of diffuse light?