What is the purpose of various lens markings on Vivitar 135mm f/2.5 lens with TX mount?

I was gifted some vintage gear. I'm estimating the Vivitar lens in question is from the mid-80's; I believe my relative bought it to supplement an Olympus OM-PC. This lens has color coding on the stops, and the stops are printed several times in different places; I think I need an education about this, I'm pretty new to photography.

So the specific sub-questions I'm looking to answer are:

Note that I have used this lens on a 35mm Olympus OM-PC and adapted to a D3400 so it's working properly, just want to know about the seemingly extraneous f-stop labeling and colors.

Edit 04/MAR 2019: This is a Vivitar TX series lens which has interchangable mounts. I did not realize this at the time of posting but have learned a lot since then. 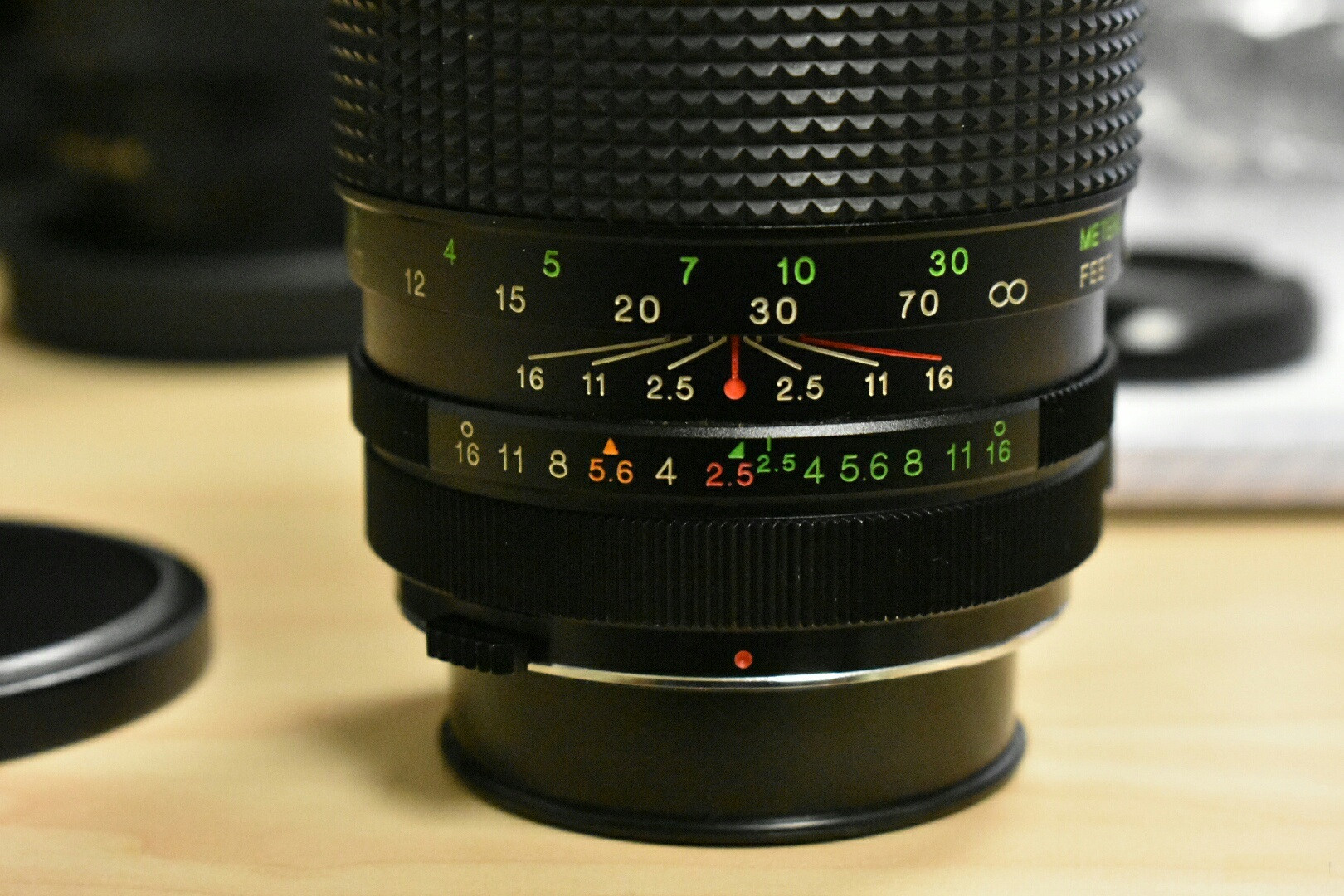 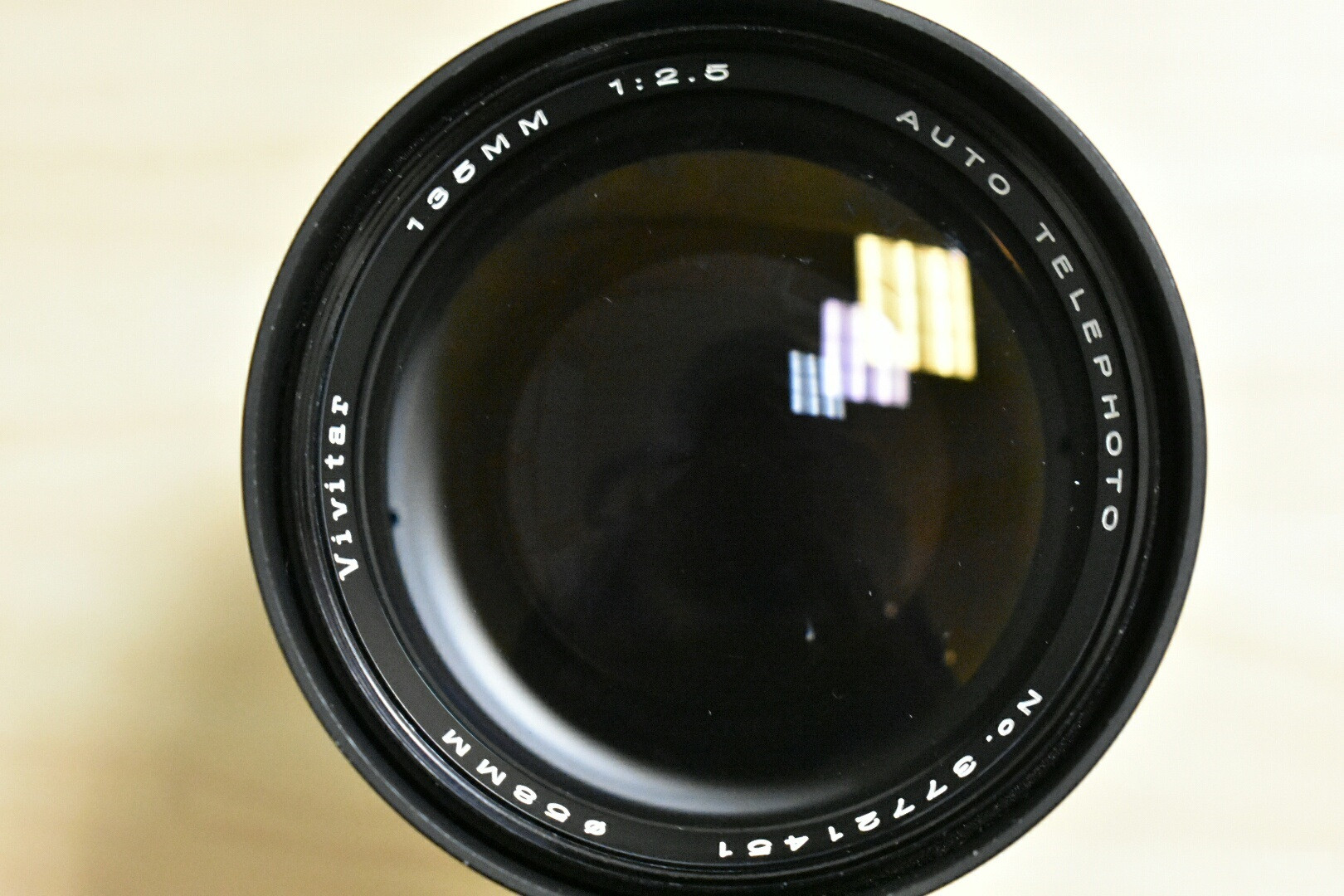 I can only answer a small subset of the questions you asked and speculate about some others, but perhaps these would be enough to give you an orientation to this lens and its basic operation.

There is no industry standard for these markings. There isn't even a vendor standard, as vendors are apt to change things up over time. (Mostly toward having fewer markings, I'll note.)

The red line going to f/16 on the right would also serve as the indicator for infra-red focus. Infra-red light comes to a different focus than visible light. That is, if you used infra-red film, you would focus without a filter on the lens, adjust the focus mark to go to the red line instead, put your filter on, and take the shot.

The markings under the focus ring that have the mirrored selection of f-stop numbers are meant to be a guide to depth-of-field. For example, in the picture as the lens focus is set, if f/16 were selected, one would expect an 8x10" print to have acceptable depth of field (and thus appear to be in focus) for subjects between about 23' and 31'. At f/2.5, depth of field is much narrower, and only a subject at about 28' would have acceptably sharp focus. Depth-of-field is very context-dependent (mostly based on degree of enlargement of the print, followed by typical viewing distance), so these markings are only ever rough guides for the user. The numbers have to be mirrored so as to indicate both the near acceptable focus distance and the far acceptable focus distance.

Vivitar also made various flashes for cameras, and the color coding of f-stops may have matched markings on the flash units for picking specific automatic exposure modes, but that is a speculation.

The dot over the f/16 mark may have indicated the setting needed to take advantage of certain automatic exposure modes on the camera, but that is also speculation.

The "58mm" is simply a reference to the filter thread diameter. The diameter symbol with the circle and slash indicates that purpose. (Hat tip to Caleb on symbology.)

Why are the f-stops mirrored under the focus ring?

It's a scale that shows you approximate depth of field at the selected aperture. So if you select f/16, you can look at distances on the focus ring at the two lines marked 16 to get an idea of the nearest and farthest distances that will be in focus.

What is the red line pointing to "16" on the right?

I think it does double duty as the DOF scale marking for f/16 and also the infrared focus indicator. When shooting with IR-sensitive film, you'd focus manually and then move the point on the focus ring that lines up with the normal focus index line (red line with dot, dead center) over to the IR focus indicator.

Why are the f-stops printed twice?

What is the green set of f-stops? Note that the ring doesn't even turn that far.

Best guess: those marks are for use when the lens is adapted to a different camera system.

Not the answer you're looking for? Browse other questions tagged lens telephoto vintage vivitar or ask your own question.