How can I improve the composition of this photograph of a lake and structures off of its shore? [closed] 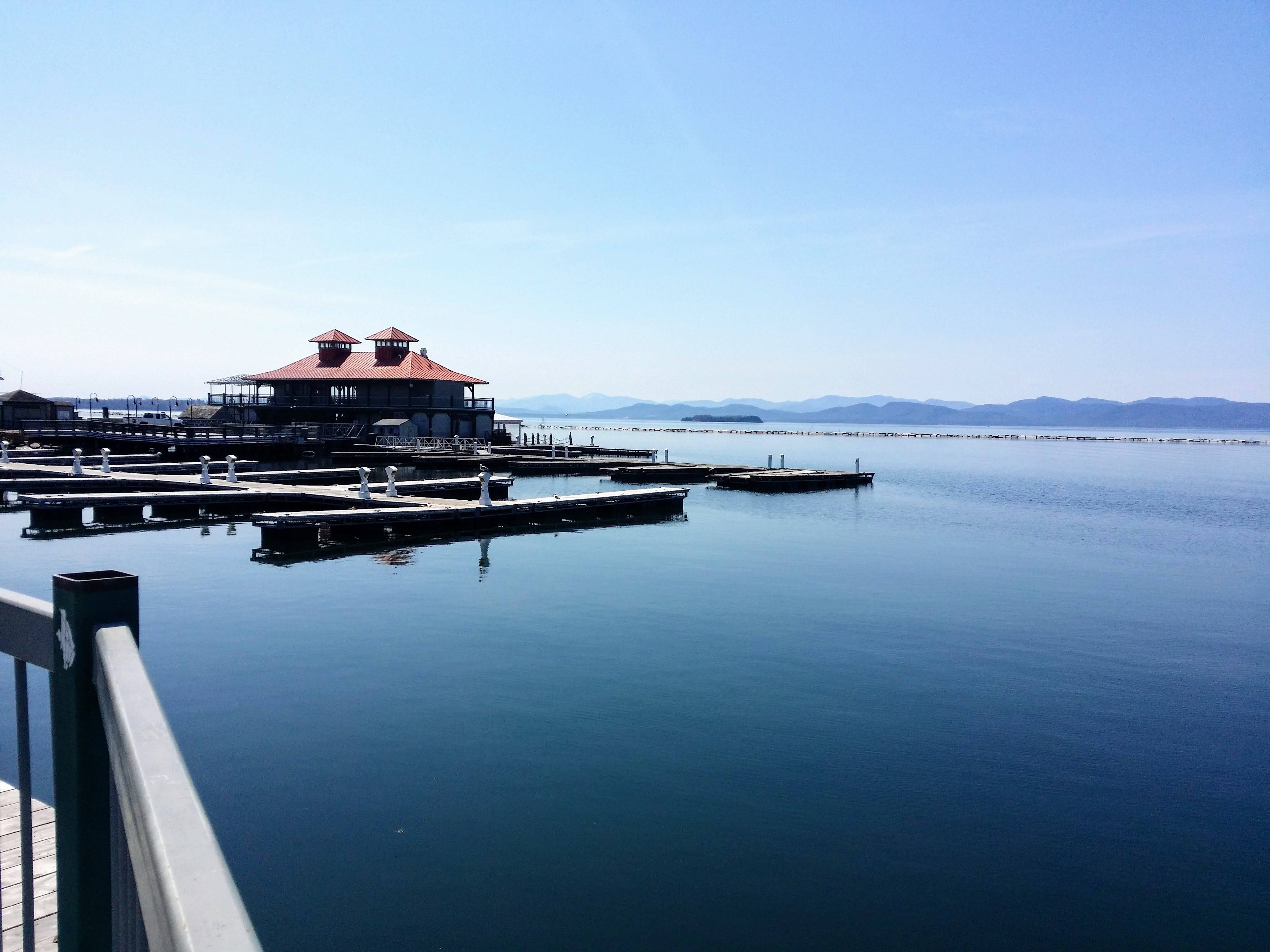 I have some specific thoughts on aspects of this photograph, two on simple post-processing choices and three on composition. I hope you find them helpful both for this image and for future photography in general.

First, contrast. The shadowed areas under the docks and under the building are quite black, with little detail. This can be graphically interesting (see more on this later) but immediately gives a sense of artificial recording — made by a camera or drawn as a simplified sketch. When overdone in the other direction, HDR techniques can make an image look fake, but dropped-out detail can too. If you still have the RAW for this image, I'd consider seeing how much detail you can bring out of those areas, making the image softer overall — or go the other way and focus on the artificial drawing.

There are a number of ways to accomplish this, but here is an example of a contrast-reducing S curve, from your sample JPEG: 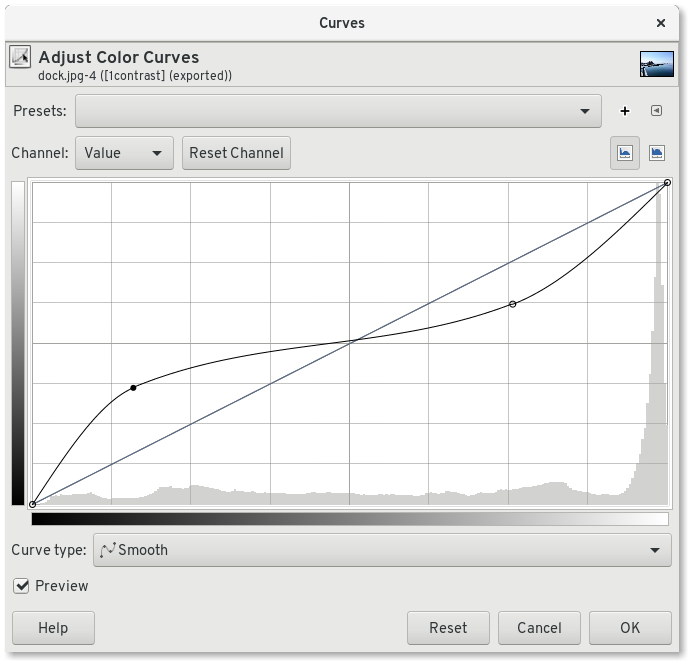 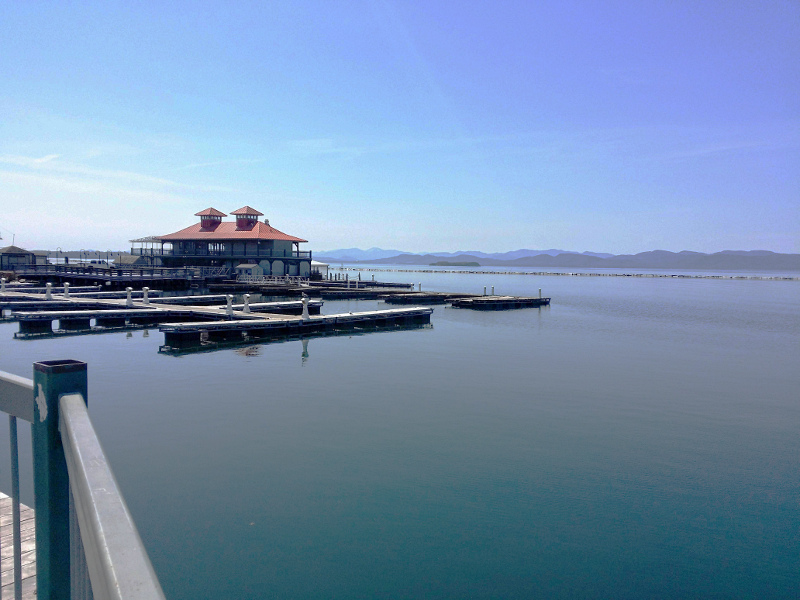 To me, this feels a little more natural, and I think adds some interest, since the mind doesn't immediately write off the black areas as devoid of any meaningful detail. This is just a quick tweak, and probably not something I'd be happy with overall — you really want to do this with the RAW image, either in post-processing software or by choosing different settings in-camera. (Or, by shooting when the light is different, although of course that's not always an option.)

Second, color. Clearly, blue is the dominant sense — which is typical for water-and-sky photos (except sunset/sunrise, of course). We have blue water, blue sky, and basically neutral gray in the weathered dock, the white-gray moorings, the railings, even a white truck. There's nothing wrong with that — monochromatic can work. However, in this scene there's also the contrast of the brick-red roof. You could adjust this to bring out more of that in the image. That's not necessarily faithful to the original, so decide on how much you want to go for journalistic integrity vs. artistic rendering:

Here, I used the brute-force approach of increasing the saturation of reds — note that I didn't do any selection or masking; this is on the whole image. Since the roof is the only red of significance in the whole image, this works — but be careful, because that's obviously not always the case. 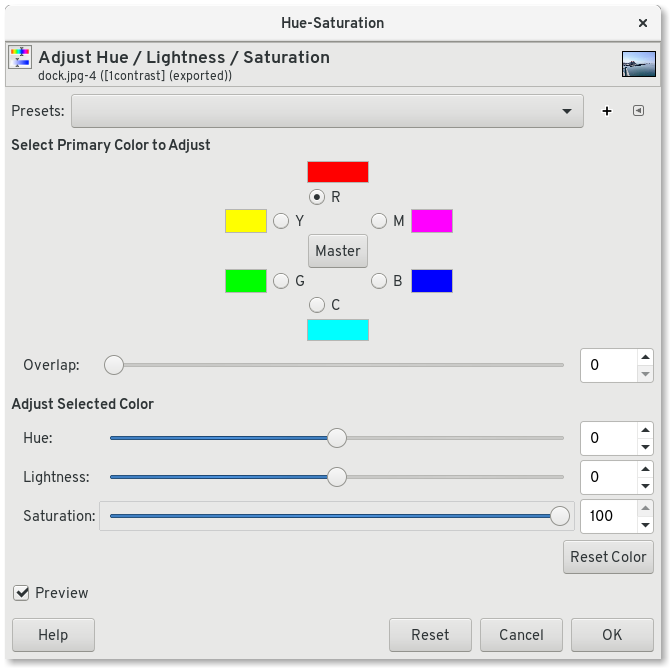 You can see that "red" is picked from the wheel, and then the saturation slider maxed out, which results in this: 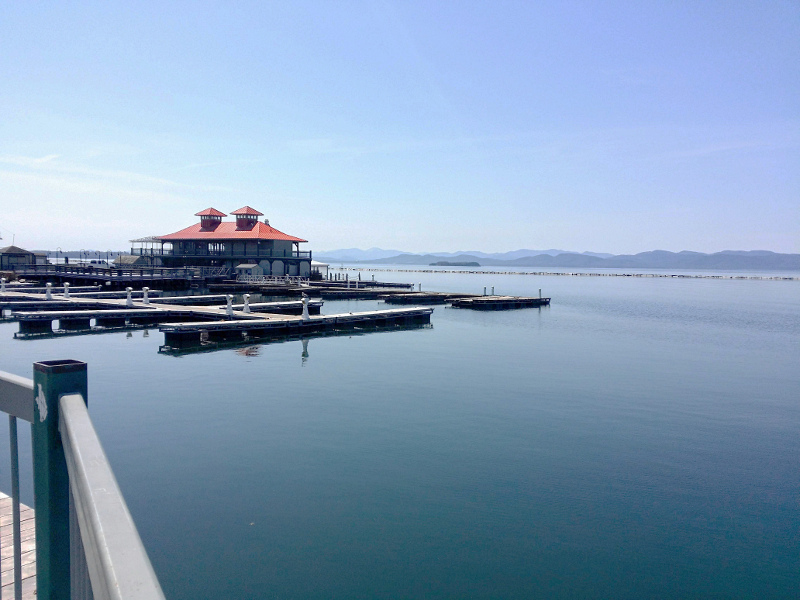 If you want to go even further along these lines, you could also mess with the hue slider, effectively replacing that red with another color. The complementary color of blue is orange rather than brick red, and shifting towards that gives even more pop. I don't necessarily recommend that — it's out of my comfort zone for photography vs. image creation — but it's an option (and, consider that if you did the same in a painting, no one would question you): 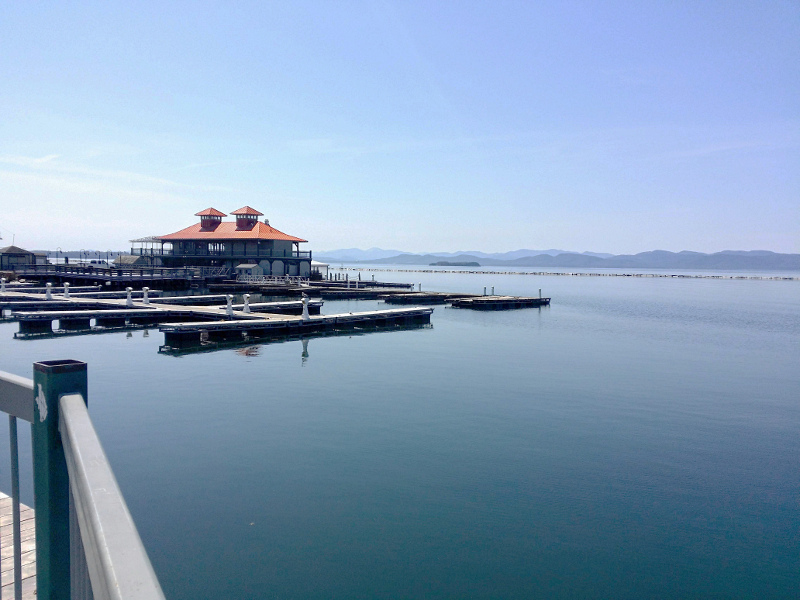 Okay, so, next up, some thoughts on composition. I think you've got a lot to work with in this scene, but you're not necessarily making the strongest choices.

First, balance. You've chosen to split the scene with the horizon right across the middle. This can work but tends towards a sort of boring, uncertain but static balance. I'm not a gigantic fan of the "rule of thirds" as a precise measurement, but the general principle can be very strong: avoid center divisions unless they're there for a strong reason, and I don't see that here. Here are two options: first, foreground/water-dominant, and second, sky dominant: 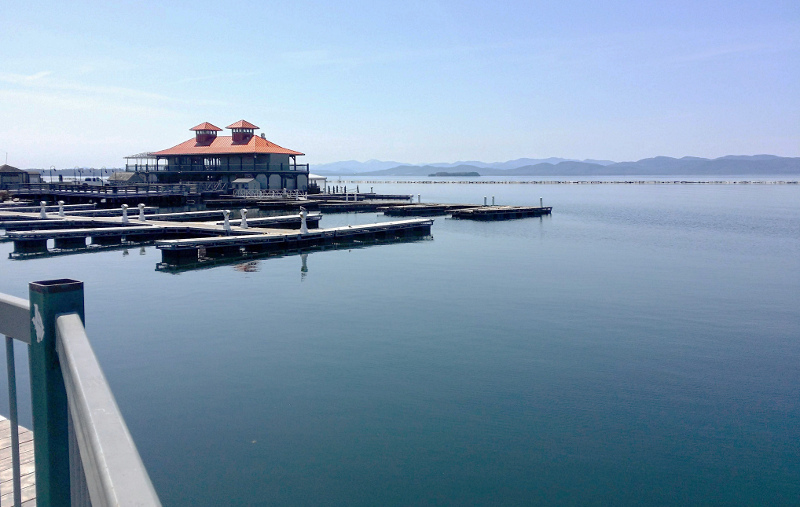 (Oh, and in both, I've addressed another compositional pet peeve: because of your angle, the horizon does not appear level by about 1°, which is surprisingly significant; the water is draining out of the lake to the right. Diagonal composition can work, but generally in that case you want to make it more than just a slight tip, so it feels intentional rather than accidental.)

Do you like either of these better? There are actually a lot of crop options to play with; we could focus on the horizontal line out from shore (is that a sea-wall?), with a strongly panoramic cut:

... which, by the way, loses something by the nature of display format on this web site; you'd want to look at it so it has a comparable area to the other options, not just the thumbnail we get by squeezing it into the same width as the rest. (I think this actually works pretty well when seen large — it gets an unfair shake when seen next to the rest, so do make sure to look at it expanded before dismissing it.)

Or, you could go the opposite, with an almost square crop focusing on all of those diagonals: 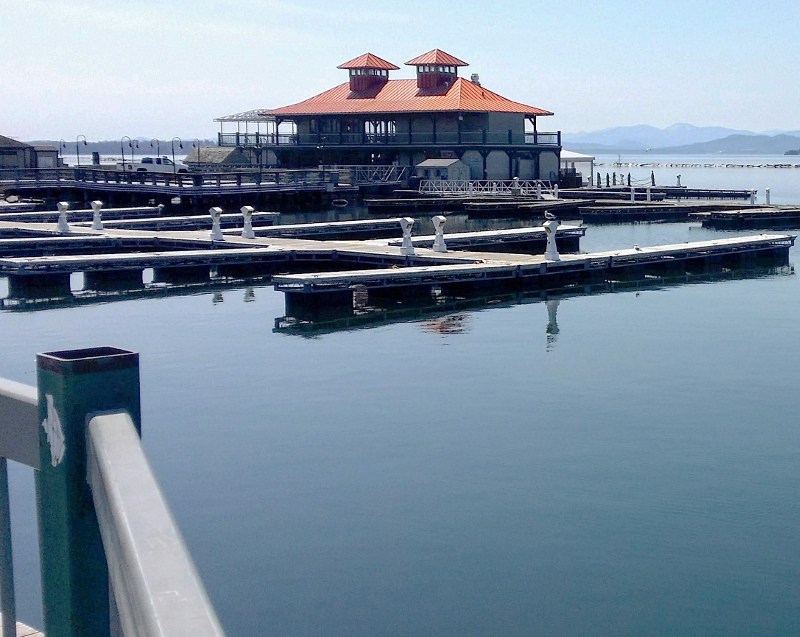 ... which brings me to the next thing: all those diagonals. Diagonal lines are a very strong element in composition. They draw the eye around the frame, and add a dynamic, moving element that solid, strong horizontals and verticals don't. In fact I'd go so far as to say that the diagonals are what made this image interesting to me (and worth all of this commentary). Without them, there wouldn't be as much potential. So, I'm in favor of anything you can do to accentuate them.

With the image already shot, your options mostly revolve around cropping, but you could disregard what I said earlier about contrast and instead really play that up, making this an abstraction focused on the lines and shapes rather than content.

If you have the option to revisit and change your vantage point, a different angle could emphasize the diagonals even more — I'm thinking it'd be nice to shoot from higher up — if there's a slope leading down to the shore... or, bring a step-ladder. (And while you're at it, you might experiment with different times of the day to get different shadows, contrast, and color — that's the secret to most great landscape photography).

Finally, a note on distractions — elements in the photograph which don't really add to the concept you have for the photograph. As a general rule, you want to eliminate these where you can.

In this particular image, there's one very obvious thing which I go back and forth on: that railing in the foreground. Does it belong or should it go? Well, it depends. I think that given a focus on diagonals, it works fairly well — take a look at both your original composition and some of the crops above. It's a dominant feature originally, but is devoid of much interest on its own, and serves to lead the eye into the heart of the image. I think the crops without it are less interesting. It also serves another very interesting function — it places the photographer in the scene, on a pier or dock right there. With it removed, the entire photograph becomes more removed. I do like the extreme panoramic cut, but there's no way to get that with the railing too; again, something you could play with by reshooting if you have the opportunity. But (and I can't emphasize this enough in all of these decisions), it's really your choice whether you want what the railing adds.

There is a similar decision to be made with the seawall and the hills on the far shore. These are lovely, but — if you focus on the diagonals, they... aren't. The lines of the wall and the shore are strong, even, steady, and the hills are soft, curvy. natural — not angular and human-made. (In fact, it is that contrast lends a lot of interest to extreme-panorama crop, especially with all of those diagonals leading to the other side... nice.)

And, last of all, there are some small elements that are worth thinking about. On the post in the foreground, there's a blotch of white — paint, graffiti, sticker residue? — which takes some attention. Is this good? Does it hurt? Maybe! I think there might be a bird in flight above the seawall in the center of the image just to the right of the building. Good, bad, doesn't matter? And, there's that pickup truck. I don't think it's a problem; it does break up some of the lines, which might not be ideal. But also, it suddenly places the image in time. Without it, is this from the 1920s, 1950s, 2000s, or 2050? With the truck, we basically know. Personally, I'd rather it not be there, but maybe that's just me. On the other hand, its presence indicates current human activity — someone is here, and the building is closed or abandoned. You might prefer that.

I think you have a lot to work with here. If you have the original RAW file that this was made from, you have a lot more options. Even if you normally use JPEG files, it's a good idea to keep both — and if your camera doesn't make RAW files and you're serious about photography, you should get one that does. If you have an Android phone and are using that, the default camera app does not do RAW, but there are many alternate ones which do. You can even get Lightroom for your phone to do post-processing on the phone itself. You can also increase your options by revisiting the scene, of course — or by thinking about some of the above possibilities next time you're out shooting.

34
Why store both JPEG and raw?
45
What is the “Rule of Thirds”?
33
How can I stop my HDR shots looking so fake?
18
What does it mean when something is “distracting”?
18
What is HDR photography?
5
What is a “Slanted S” in a curves layer?