How can I remove a stuck adapter from a lens?

I have a Nikon G to Sony E adapter on a Rokinon 14mm lens with Nikon mount.

I can't remove the adapter no matter how much I turn, pull, or even push the little metal protrusion on the side.

How do I remove the adapter?

So the adapter is stuck on the lens, right? Understanding what's going on underneath might help. Here's a picture of a Nikon adapter and a Nikon lens. 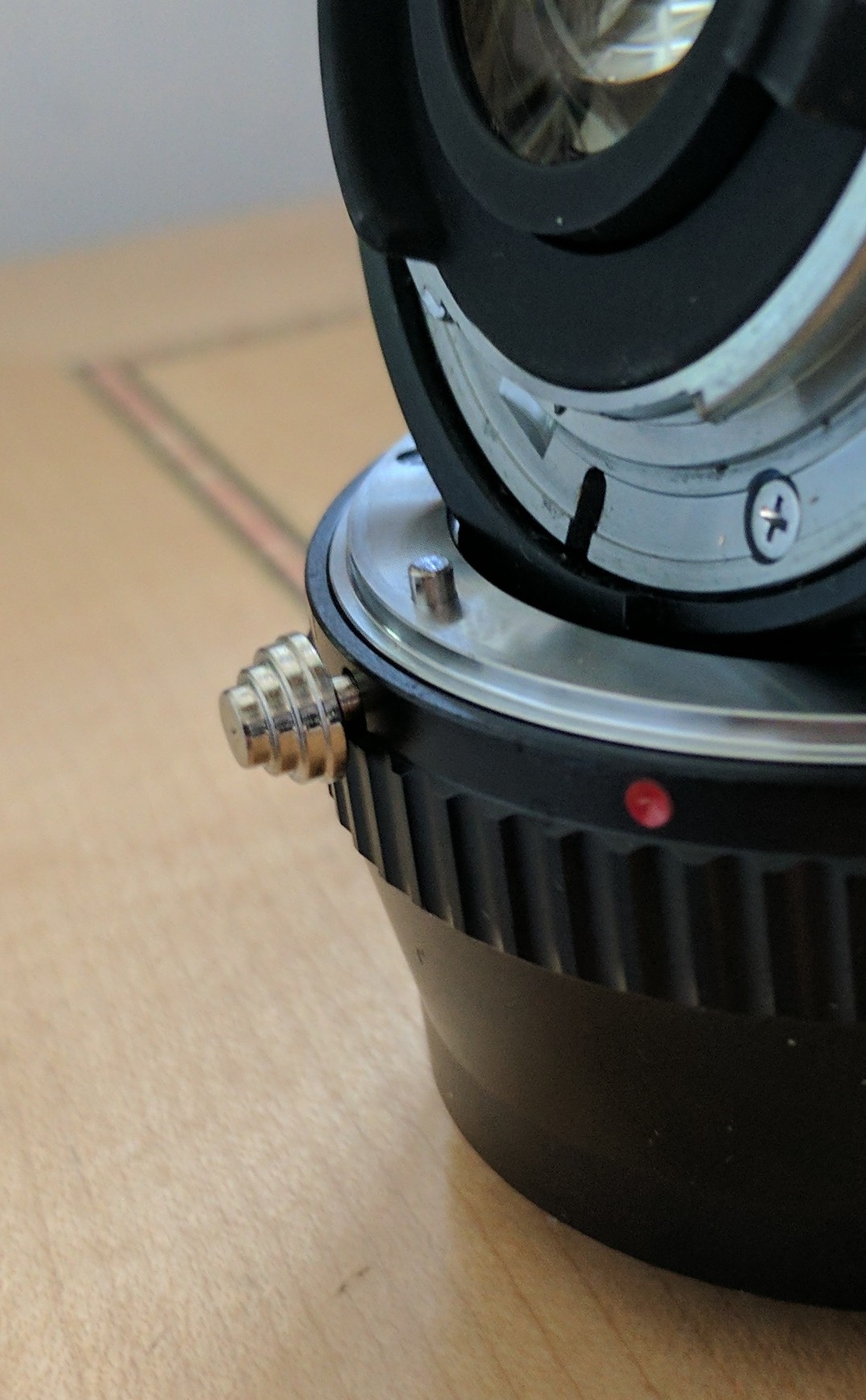 1) The pin sticking up from the adapter. That goes in and out of the adapter

2) The button / knob on the adaptper. That moves towards the camera end of the adapter to make the pin (1) recess into the adapter

3) The groove in the lens that the pin "pops" into when it's put on the adapter and turned.

So I guess a number of things could be going on.

a) It's POSSIBLE that the pin mechanism is working fine, the pin (1) is pulling out of the slot (3) and the lens is just friction locked onto the adapter. This is POSSIBLE because the adapters are fairly cheaply made and tolerances can be questionable. Turn the aperture ring to the smallest aperture (highest number.. 22?) so that the raised lip is out of the way of this mechanism. Looking carefully from the side, when you move the knob (2) you should be able to see if the pin (1) is getting out of the way. This is why (3) is a slot and not a hole in the bottom of the lens. If you're seeing the pin (1) get out of the groove (3) then this IS friction locked because the adapter has a tiny bit too much height to it. If it were mine I'd be thinking.. this might just need a bit more pressure. Scarey, but there isn't anything a camera shop can do about this other than maybe have a better way to grip the lens without damaging it. If it were my lens I'd be thinking about moderate temperature change. I'd put it in a ziplock in the fridge in case that would contract the metal just enough. (And the "you should take it to the camera shop" crowds heads just exploded). I'd do that until it got to a point where I'd be nervous about the temperature affecting the lens, and I'd google first to see what low temperature tolerances lenses have, and Rokinon specifically before doing that too. I'm more worried about heat with lenses than cold to be honest. I'd be really nervous about doing ANYTHING with heat as heat can make the lens lubrication vaporize and cloud the optics.. even a lens left in a hot car can suffer from that. Cold.. eh.. a bit safer to push the envelope.

b) If the test above shows that the pin is moving, but it's just not moving all the way out of the slot (3) it's time to get a really really small pick. Again, that is why the slot (3) is a slot that you have a tiny (miniscule) amount of access to rather than a hole in the base of the lens where you are SOL. If you can get a tiny pick into that slot and leverage the pin (1) the final distance it has to go, then you are good. This is what a camera repair shop would do.

c) If the test above shows that the pin isn't moving at all.. then it's become disconnected from the knob (2) which is also possible, as again, adapters are cheap. If this were my lens, I'd be pushing IN on the knob as I move it to see if it can catch, but if it's really disconnected, honestly I'd leverage the knob off the adapter. Here's an adapter where the pin has just dropped off. 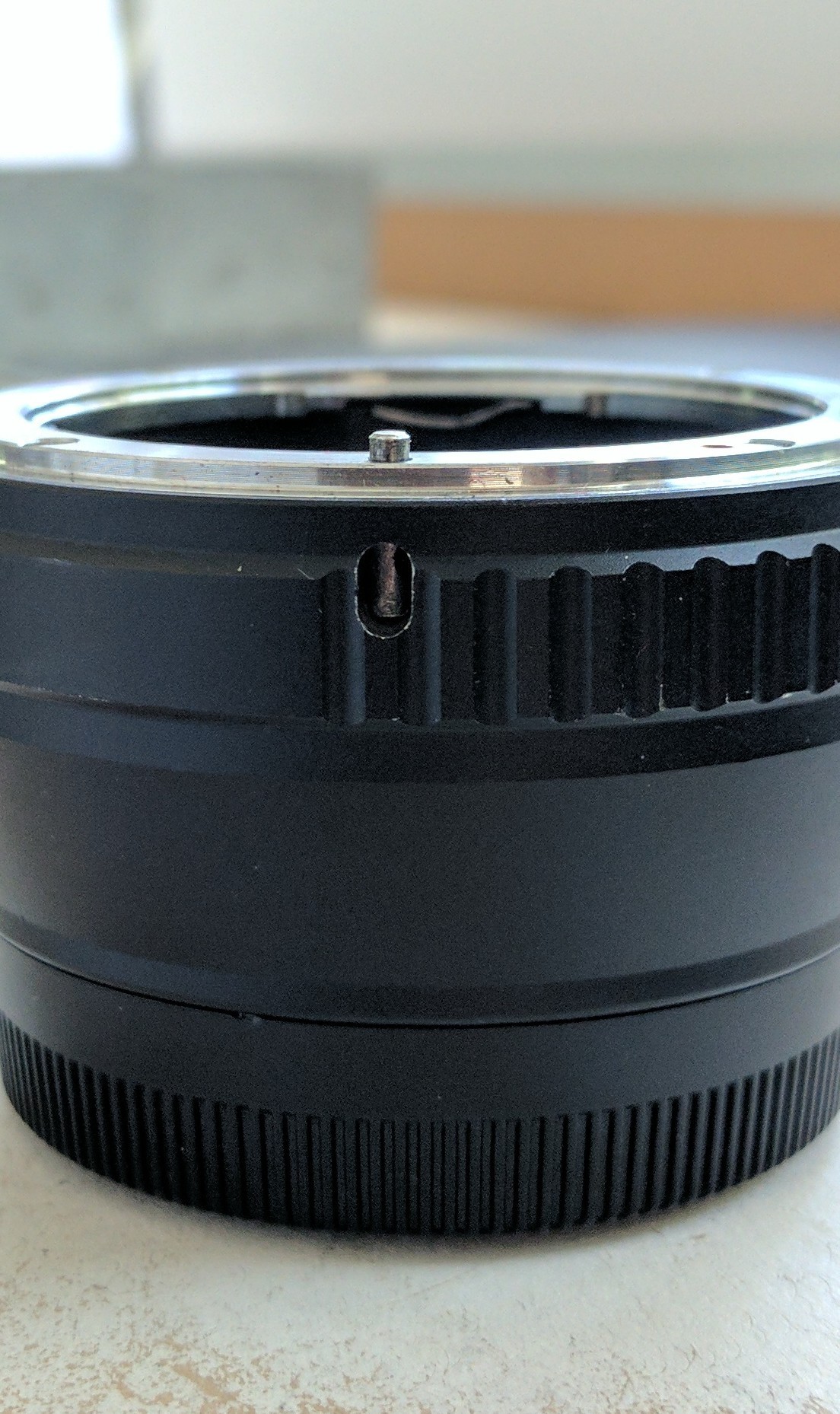 You can see the pin through the hole. I still use this adapter on a lens that I don't need to use on my Nikon gear often, because it's easy enough to put a pick in that slot, get some purchase on the pin and pull it down.

If it's not any of those issues then I'm truly stumped. Hopefully it's (b) or (c) because at least then you have a super clear mechanical diagnosis of what the issue is. (a) is a bit more scarey.

Sorry but the best way is to go to service point (authorized or at least with good word-of-mouth).

In other case you will risk damaging either your body or adapter.

In worst (best?) case they will show you trivial way to remove adapter and you will become Stupid Client of the Week story. OTOH what you describe can be sign of serious problem and they will rescue your gear.

Been there and only after several unsuccessful attempts went to repair shop. While I've managed to destroy adapter fortunately body wasn't damaged.

Received the Turbo II Canon EOS to Fuji X and a PK to EOS ring adapter allowing for old Pentax lens mounts. Testing various lenses with only about 15 mounts and dismounts, the release button no longer had torque needed to release the ring adapter atop the Turbo II. Literally trapped. Took some time and sweat to figure it out.

The only good solution is pretty easy! Simply unscrew the weird round Devo-esque release button (lefty loosey). Take any metal paper clip and insert in the vacant screw hole. Push down. Yeah, the paper clip has way more torque than the stupid round release button lever. Lens is easily removed. This does not damage the screw hole, so lousy button can be screwed right back in, "good" as new.

Various modifications to the ring adapter (such as removing the lens catch mechanism) solve the crisis permanently, but then you can't lock the lens onto the ring adapter. Still, that's the compromise I opted for. If you happen to be handy at precise machining, there are other options (namely drilling to correct the mount offset, and not drilling so deeply that the Lens Turbo II doesn't entirely set. A bit tricky, though, and who knows if that solution would last.

I did drill to get the lens alignment right. I have a couple wide lenses with permanent hoods that need to sit right to avoid hard vignette.

Not the answer you're looking for? Browse other questions tagged nikon sony lens-mount adapter or ask your own question.

1
Olympus T2 Adapter ring stuck on my Sony Alpha — how can I get it unstuck?
7
How do I remove a broken lens mount ring from a lens?
2
How can I fix a Nikon Coolpix L120 stuck lens error?
2
Is there a Nikon F to Sony E/FE lens adapter?
0
Nikon lens with an adapter vs Canon lens on a Canon body - image quality difference?
6
Is there an adapter to allow a camera to control focus or aperture of a manual focus & aperture lens?
0
Can not focus Nikon 500mm F/5 lens with adapter on Sony A7Riii
2
EOS-M4/3 Adapter stuck on Sigma Lens?
1
Can I turn on automatically selecting a shutter speed for Sony A350 with M42 lenses? Looking for adapter M42 ↔ Sony A