How do I make a perfect photosphere?

I take photospheres on my Android phone, and for some reason, it's never perfect. My feet are always there. And sometimes there are some places where they aren't connected properly.

How do I make a photosphere perfect? How far should my phone be away from me? Do I only have to twist my body and not actually turn myself?

What you're running into, in terms of the places where the photos don't join up seamlessly, could be one of two issues. It could be that you missed covering that part of the scene (blank screen; no data), and it could be that you created some parallax error by moving the camera in space, rather than rotating the camera's lens around its "no parallax point" (sometimes erroneously called the nodal point).

This can be very very difficult to correct if you're handholding the phone (camera) in some situations (i.e., shooting inside a small room). It can be relatively easy to correct in others (shooting outside with no subject matter particularly close by). The trick is not to move the camera in space, but to rotate around the lens's no parallax point.

The easiest way to do this without error would be with a tripod and a special panohead (see: How are virtual tour photos taken?) with a tripod adapter to hold the phone (or maybe a special smartphone setup), but this might be more gear and expense than you want to go to. Another technique you could consider is using a plumbline attached to the phone (a trick known as a philopod). You mark a spot on the ground, and make sure that as you're rotating the phone, the weight is always over that spot. 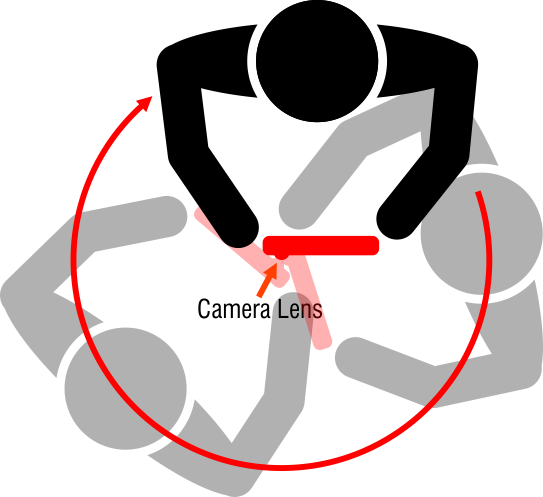 As for having your feet in the shot--just make sure they aren't when you take the member shot. You may have to do some interesting bodily contortions to get away with this. :)

Not the answer you're looking for? Browse other questions tagged cameraphones 360-panorama or ask your own question.

23
How are virtual tour photos taken?
5
Do I “need” a panoramic head to shoot 360 panoramas?
3
Where could I get a tripod for panoramas on iPhone?
6
How do you avoid showing the tripod in 360º (spherical) panorama photography?

6
How to make spherical (360) panoramic image with 2:1 aspect ratio?
2
How to make indoor spherical panorama
1
Could a phone-camera have a medium-telephoto lens and still fit in a phone?
1
How do I make cubemaps with Hugin?
2
How do I make equirectangular with Hugin, starting 6 pics Cubic Projection?
1
How to view 360° photos on a desktop?