My Canon EOS 5D Mark IV is asking if the inserted battery is original or not. What are the implications of my answer?

Edit: I made a screenshot: 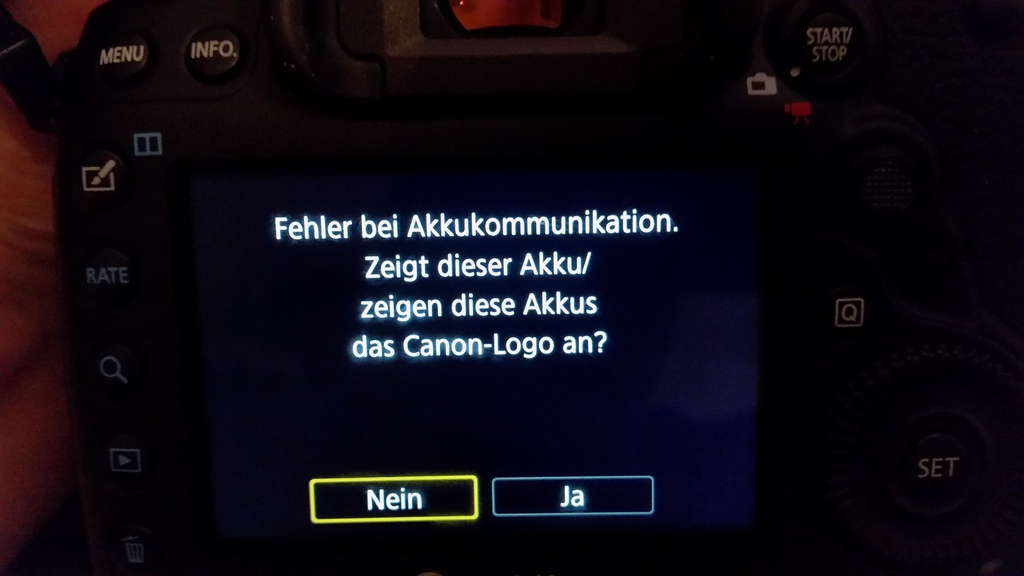 Unfortunately it is in German language. For search engines to help others with the problem find that question, here's a transcript: 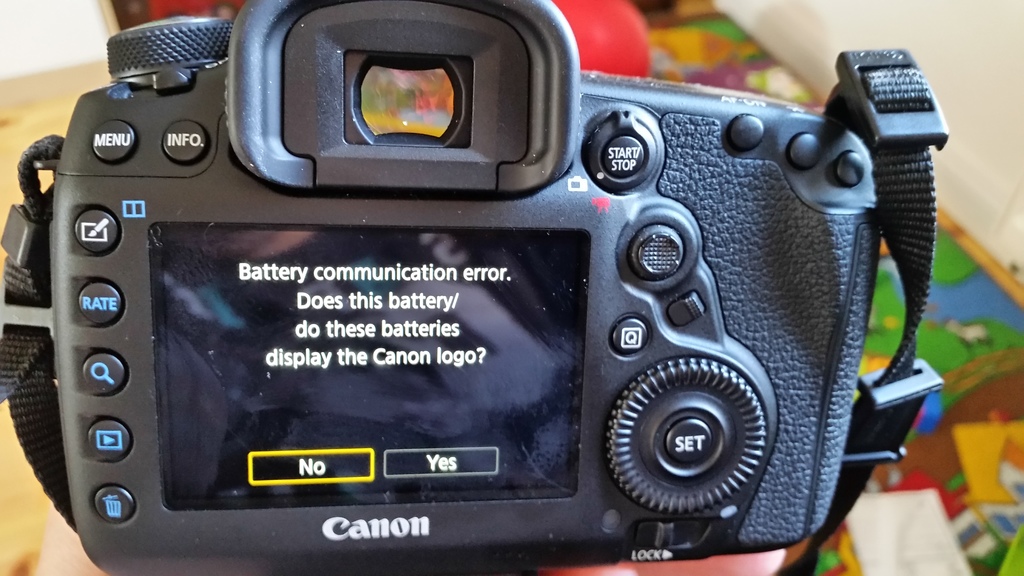 Battery communication error.
Does this battery/
do these batteries
display the canon logo?

The error comes before the sensor cleaning.

Having a transcript of the English error message brought the solution, so thanks to all that helped out here and made me do the necessary stuff. On https://learn.usa.canon.com/resources/articles/2015/counterfeit_battery_protection.htmlp the reason and the implications of this message are explained.

What will happen if I chose either of the options? Here's a quote from that site explaining:

From a Canon Digital Learning Center article titled: How to protect yourself against counterfeit Canon batteries:

It’s important to understand that these warnings will still allow the user to proceed, after confirming via simple menu commands on the camera whether the battery has a Canon logo and, if so, whether the user accepts any potential risk in using a battery that the camera cannot confirm is a genuine Canon-brand battery. If you have purchased a non-Canon branded third party battery, you may get this warning screen upon every start up — but you’re free to use the battery, after telling the camera that you accept any possible risks.

The older batteries should still provide power to the camera, you just won't get the full functionality you got when using them with the 5D Mark II. This would include ID and registration, advanced power information such as last date inserted, recharge performance, number of shots since last charge, etc. You may or may not get even the basic battery power level symbol on the top LCD screen of your 5D Mark IV. I've read one anecdotal account that said the battery symbol did not appear immediately after power up, but later did show during the same shooting session (without any power cycling of the camera).

The exact sequence and the results of each answer to the challenge question, as outlined in the same Canon article, goes like this:

Here’s what you’ll see on the newest cameras:

What Canon seems to be doing with this challenge question that requires a user answer that acknowledges "Canon cannot guarantee the the performance or safety of this battery..." is to shift liability from Canon to the user if anything should go wrong. Although not spelled out anywhere that I can find, it would probably be safe to assume that the camera is storing the user's response to proceed with a third party battery. If there are issues with the camera later that might be attributable to a faulty power supply Canon will likely attempt to decline warranty coverage. Laws vary widely from one locality to the next so the full implications of the user acknowledgement can not be covered in an answer of this scope here. The legal ramifications regarding warranty coverage should be similar in each locale to the older cameras such as the 7D Mark II and 5D Mark II that have a one step sequence: "Communication with Canon LP-E6 battery is irregular. Continue to use this battery?" The user chooses either Cancel, in which case the camera shuts down, or OK, in which case the camera continues the power on sequence.

I have read scattered anecdotal reports that the 5D Mark IV will refuse to power up with some, but not all, older third party batteries. It is unclear from those reports if the user answered Yes or No to the challenge question. I've also read reports that new copies of the LP-E6N from companies such as Watson, Wasabi, and SterlingTek work just fine in the 5D Mark IV without even being challenged with any dialog upon turning the camera on. Sometimes one firmware version may accept the same battery without the challenge question that another firmware revision will not.

If you are that worried about damaging your new camera, then use the older 3rd party batteries only in your older camera. If you've sold it, then offer the buyer a good deal on them. You can buy fresh 3rd party LP-E6N batteries that have been confirmed to work with the 5D Mark IV for as little as $15 each. That's not much to pay for peace of mind regarding a $3,500 camera.

Canon periodically updates the battery protocol, apparently just to discourage use of third party batteries. Canon older batteries are not (supposed to be^) affected because the firmware in the older batteries already contain some "secret" lines of code that are only needed with the updated protocols. When the newer camera detects a battery without the hidden code it will give you the message to try and scare you into only buying Canon batteries. (^When Canon updated the LP-E6 battery to the LP-E6N and revised the LC-E6E charger they had an issue with many older OEM LP-E6 batteries not charging properly in the new charger.)

Since the third party battery manufacturers reverse engineer their batteries, they didn't include the "hidden code" in older copies of their LP-E6 replacements that were reverse engineered from the older Canon batteries upon which they were based because the older cameras do not interact with the "hidden" lines of code.

Another thing to consider is that the genuine Canon batteries are more likely to be counterfeited and passed off as genuine by shady sellers. Fake third party batteries aren't near as common. After all, if you're going to make a cheap fake, why not mimic the version that sells for $60 instead of the version that sells for $20 or $10 or $5? If you buy a 'genuine" battery from an unauthorized seller it is highly likely you have bought a fake. If you buy "genuine" or third party batteries from authorized, reputable sources you are much more likely to get what you think you are paying for.

For more about using third party batteries, please see:
Why do cameras use proprietary batteries?
Should the INFO display show the status of both batteries in a Canon battery grip?
Should I buy an original manufacturer battery, or is a generic brand OK?

As others have already mentioned here, Canon batteries use an identification chip that "proves" that the battery is a genuine Canon battery (though these schemes invariably get broken pretty quickly).

Sadly, it's a lot easier to count the number of lost battery sales than the number of people who stopped buying their cameras because of these antics, so I don't expect Canon to realize what a mess this makes any time soon, if ever.

When you see this error message, the very first thing you should do is loosen and retighten the grip screw. 99.99% of the time, the failure will go away.

I was in the middle of a job, I got the questions about batteries that I have been using for 6 months. I use a battery grip with one Canon Battery and one third party something I have done multiple times. I answered yes to the logo question. The message said I had fake batteries and it bricked my camera. Now it doesn't do anything. It refuses to power on. This seems like a virus. I did not receive any warning. It just shut down. The 90D is my third canon camera. Perhaps it's time to dump Canon. I just fixed it. I removed the battery grip. Stuck in one canon battery. Nothing, still a brick. Then I place two-third party batteries in the grip and put it back on the Camera and it came on. I think I am done with Canon. It ruined my rare paid job. I don't know why it is working now. I can't trust it and I will never take a canon camera on a paid job. I will use it for fun and family possibly. But, shutting down the device is just plain nuts.

46
Should I buy an original manufacturer battery, or is a generic brand OK?
27
Why do cameras use proprietary batteries?
11
What are the problems with using generic LP-E6 batteries with a 5D/7D (if any)?
0
Why don't Canon and Nikon lock out third-party lens makers?
1
Should the INFO display show the status of both batteries in a Canon battery grip?
1
Battery life of Canon 800D with 70-200mm f/2.8 L IS II USM lens
1
Battery is not communicating?

9
What's the difference between Canon EOS battery packs?
0
Camera stops by itself while shooting, or shows no battery, then ok again?
0
What solar battery charger is compatible with the Canon LP-E6 Li-ion battery
2
Can I power a Canon EOS 1200D with mains power instead of battery?
1
What battery do I need for a Canon EOS 500?
0
Does lp-e8 battery fits to canon eos 100d
2
Where is clock/backup battery on latest Canon EOS 1DX Mark II
1
Canon EOS 800D battery problem
0
Canon 5D Mark IV says battery is full, dies in 2-3 minutes, both battery chargers show battery as full