How could I make the snake better stand out from the grass in this “backyard wildlife” photograph?

Distance between object and camera was about 2m.

Can any kind photography expert suggest what could have been done to improve the photos I have captured?

My specific questions about below two image:

The greenery behind the object of interest (snake) is more bright and illuminated well. What could have been done to still make the snakes come out well.. I mean, only in the picture..

I am new to photography and hence I am still learning technical aspects and terminology. 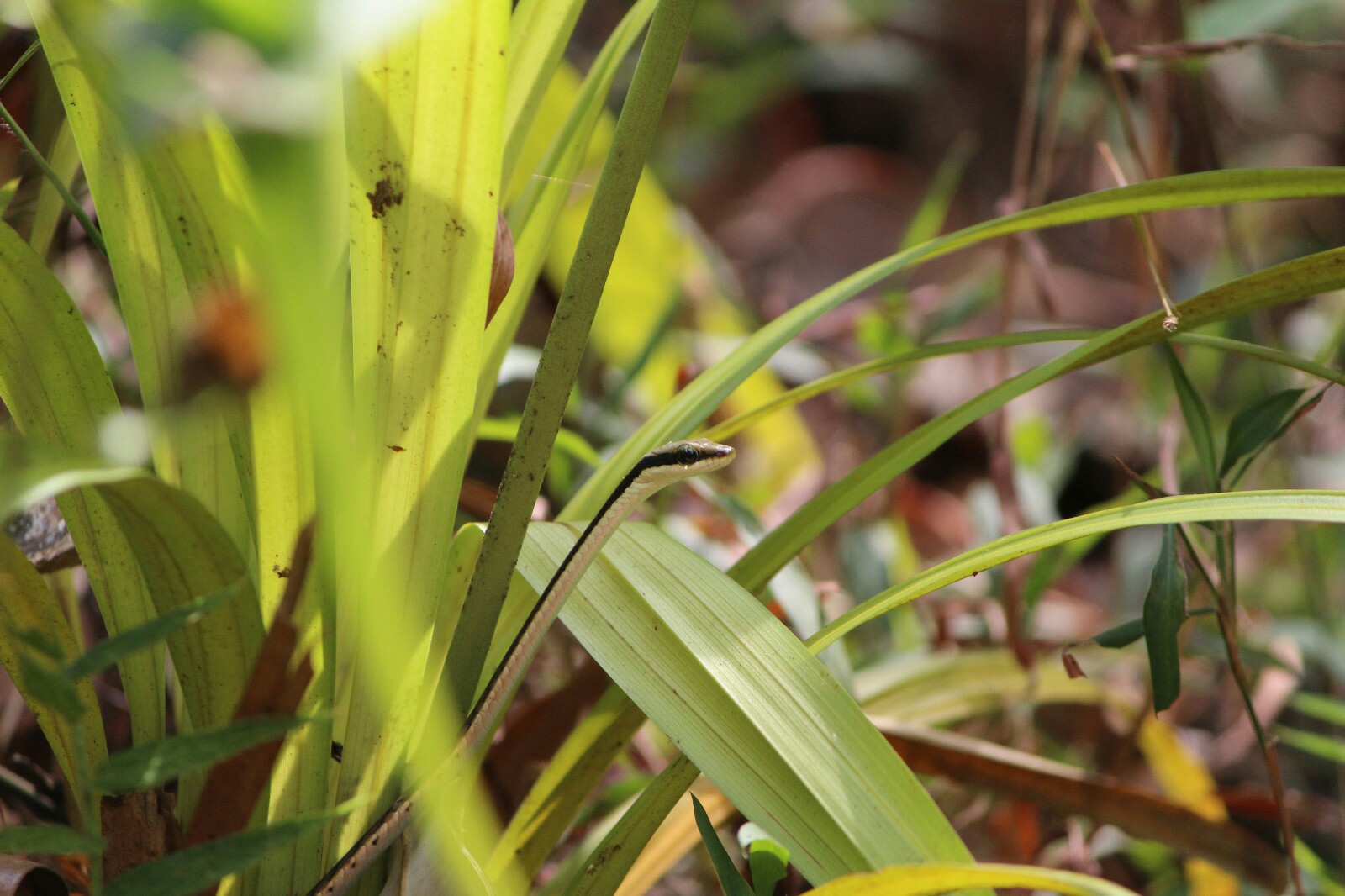 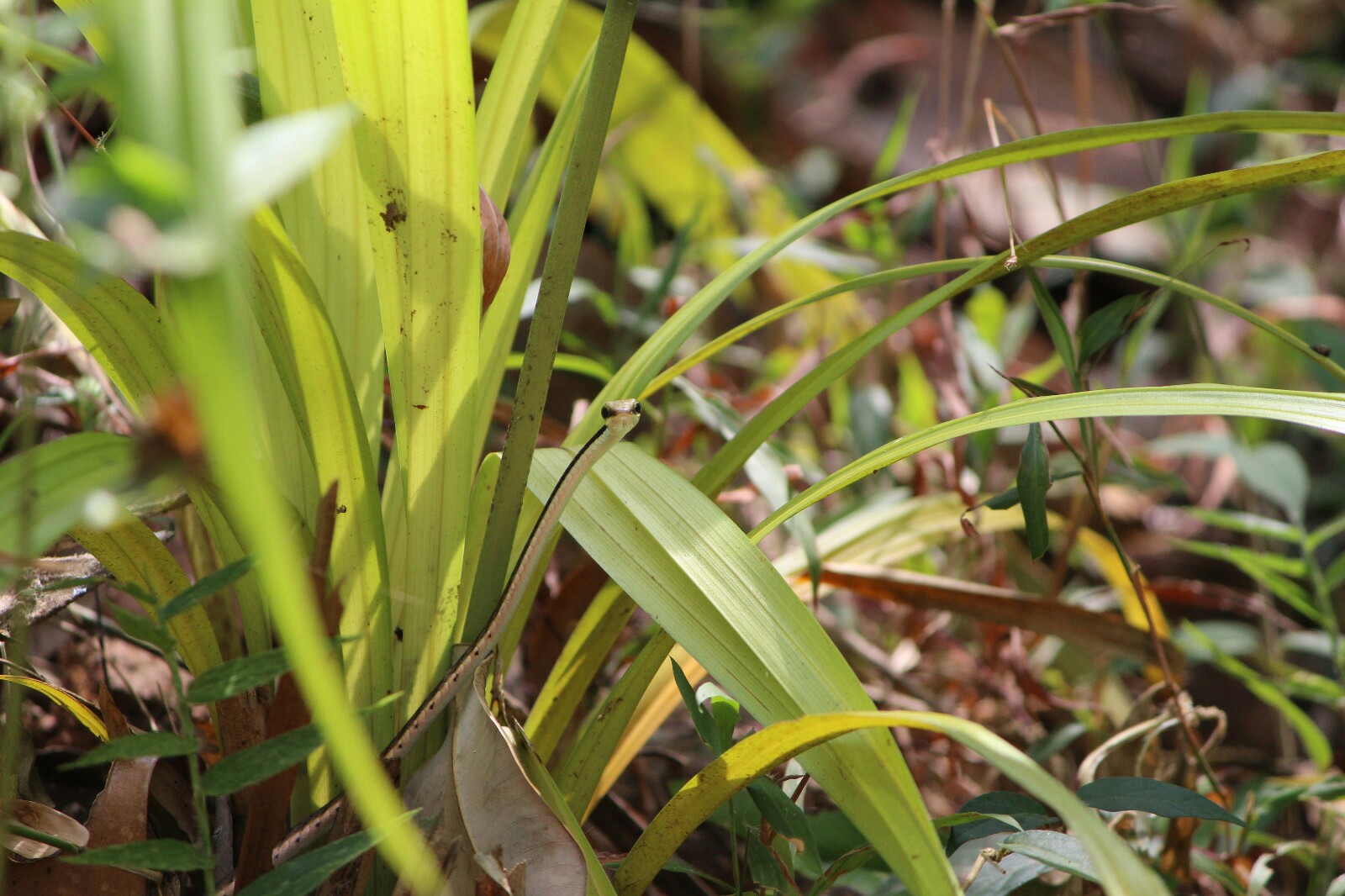 Nice shots! I think the biggest issue with these photos (with regards to attracting attention to the snake) is that the leaves are parallel to the snake, and lead the eye away from it and toward the edges of the frame. Of course, this is part of the snake's camouflage, so it's doing well!

Here are my crude edits to try and mitigate the effect of the leaves leading the eye away from the snake: 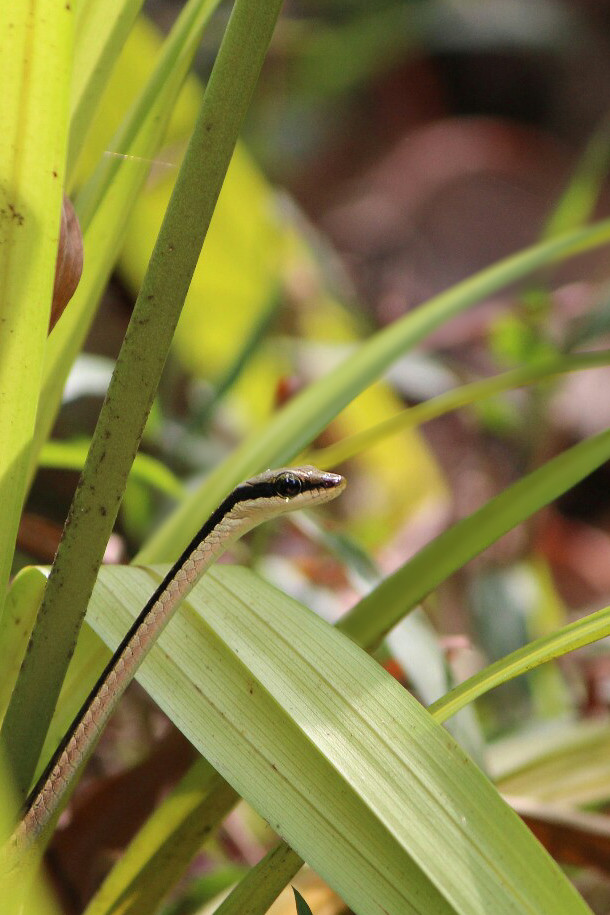 The difference is pretty minor, but I think it's slightly better. 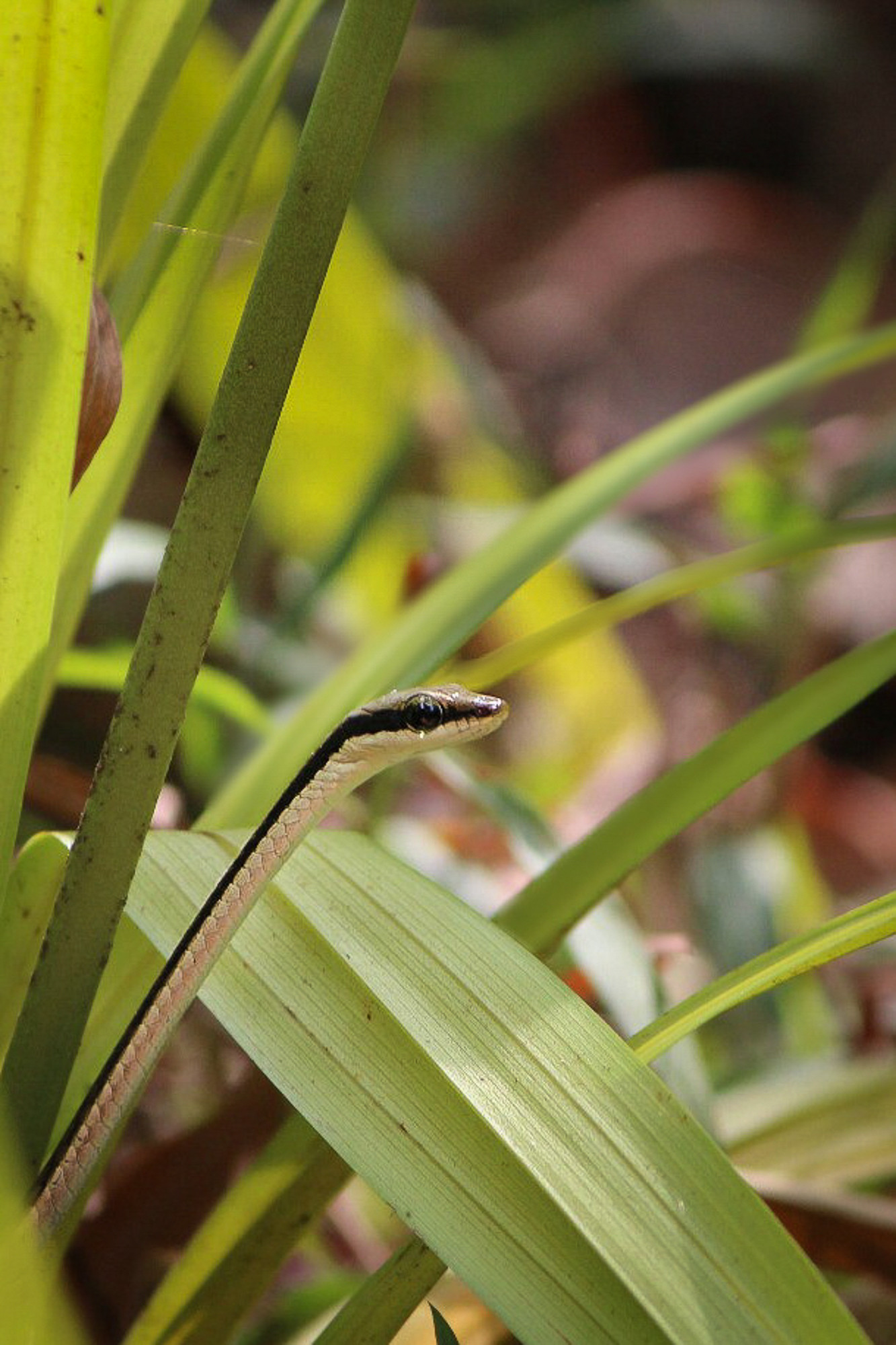 I think that with these edits, the composition is tight enough that the viewer can already see the edge of the frame in their peripheral when they view the snake, so they don't feel the need to look away and trace the surroundings.

Although honestly I like the original framing better in principle, I think the snake's camouflage is causing a problem and this helps to resolve it. This is just one way to handle the photo in post; do whatever you think looks best!

You're swimming upstream here. I don't know what kind of snake that is, but it looks like it's used to mimicking the plant. Instead of trying to make the snake stand out from the plant, consider framing the photo to take advantage of the snake's behavior. You might end up with a photo where the viewer doesn't see the snake at first, and then gets a surprise when they finally do notice it.

If you do want to make the snake stand out, I think I'd change the angle so that the green leaves are directly behind the snake. And I'd get closer (if it's safe) or crop (if it isn't) so that the snake and greenery pretty much fill the frame. As it is, the snake is hard to spot because both the snake and the leaves are put against a chaotic background of browns, greens, and yellows. If you had moved to the right a bit and zoomed in, it looks like you might've gotten the white underside of the snake against a mostly-green background.

Also, getting closer and using the largest aperture you can manage would've helped you to separate the subject from the background. If you'd moved as described above and used a large aperture, you wouldn't just have the white snake on a green background, you'd have a sharply-focussed white snake against a softly blurred green background.

Especially eyes of the snake were supposed to be more focused.

Nailing the focus when shooting a moving subject close up is tough. Taking lots of shots can help -- the more you take, the more likely it is that you'll get lucky. Using a smaller aperture will give you more room for error, but you'll lose some of that nice background blur that separates the snake from the background. Depending on what else is around, you might be able to use a smaller aperture (for more depth of field and easier focusing) and keep the blurred background by moving the camera closer to the ground, so that the shooting angle changes and the background is farther away and therefore still blurred despite the increased depth of field. A tripod can help you focus when shooting macro by eliminating z-axis (forward/backward) movement, but in this case the snake was probably too active for that.

Like @mattadm said, it's really open ended! But if I had to change one thing with these photos, it would be the location of the snake! I would recommend you to read up about the "Rule of thirds", it does not always apply, but it's truly a good rule of thumb!

You wouldn't even necessarily need to retake the photos, just try to crop them after the rule of thirds, and you'll probably find some interesting results!

Crop the picture to attract the viewer's attention to detail(s) you want to emphasize.

Split the picture to multiple layers (snake; the rest) and play with saturation and brightness.

Next time, try to shoot with smaller apperture, split the picture and apply unsharp mask to the surrounding.

Try to shoot from difefrent angles, positions to get the desired contrast in the moment of capture.

Get used to the fact that You will use one picture from thousands. Animals are fast and they hide themselves as much as possible. With practice you can push the ratio to much more optimistic values, so don't give up.

Not the answer you're looking for? Browse other questions tagged macro wildlife or ask your own question.

3
How can I get the most possible depth of field out of close-up/macro shots?
1
Macro mode: Should I make sure the lens is all zoomed out?
0
Which Canon 70-200mm is best for a wildlife trip?
3
I'm trying to record a water droplet on a glass slide from the side and underneath angles simultaneously. How can this be achieved?
1
How are the smooth, colorful backgrounds created in these wildlife macro photos?
2
How to make macro photograpy when the subject is placed in shallow water?
1
Is this the limit of the camera image quality or is the subject out of focus?