This worked well during daylight hours, it meant that people could avoid taking a photograph if a Purple lanyard was in shot, and ask before publishing if an Orange lanyard was noticed in shot later.

The problem came in the evening. With photos taken under artificial light, it was much more difficult to tell Black from Purple lanyards, especially across the other end of a large room. As such, people are concerned that if photos slipped through at the 'taking the photo' stage then they might not be noticed at the 'publishing' stage either.

A variety of alternate colours have been suggested, but people have brought up the subject of making the colours contrasting for people with the various forms of colour blindness too.

Is there a combination of colours which have proven to be effective at providing good contrast in a variety of lighting conditions, and which are suitable for the more common forms of colour blindness?

Since this is a photography site, from the point of view of solving the problem from the photography point of view, I don't think that it's really important to address color-blindness. It's important to make the lanyards easily identifiable in any photos taken; photographers with color-blindness can use an "eye-dropper" color identification tool to check if a given lanyard is safe or not. From this point of view, I'd avoid black and white, and pick simple, bright primaries (red, yellow, green seem logical).

But, you could also choose options from a "safe" palette, and since it's not hard to do that and still keep some logical meaning, you might as well. 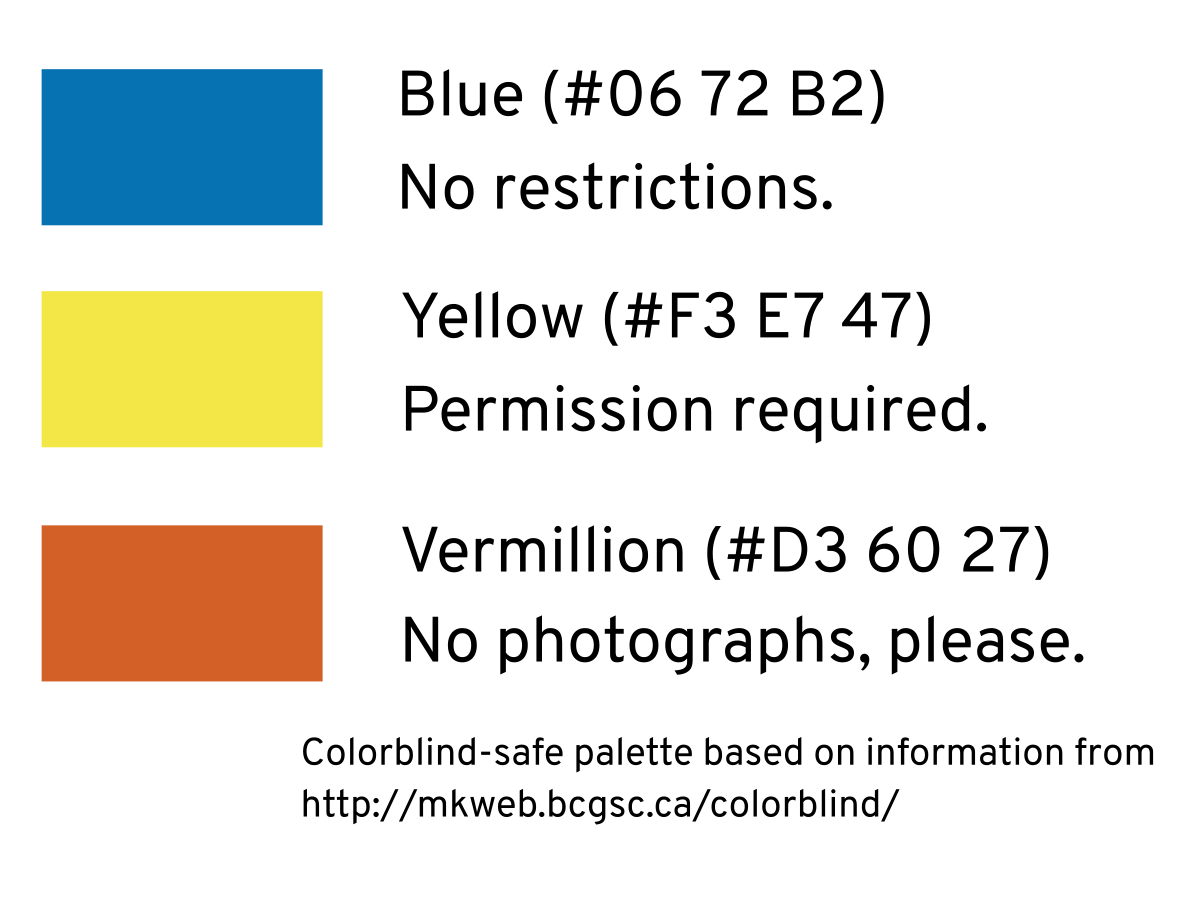 (Note: I am not color blind; I am relying on the cited research indicating that these particular colors should work.)

The problem is a combination of the lack of contrast differences (you should use dark for one end and get progressively lighter, rather than having dark colors on both ends) and the Purkinje effect, which changes how the human eye sees color at night (basically, we don't).

At night, our eyes respond better to blues and greens than reds. So the purple means you're getting red and blue light. In dim light, that red light isn't going to even register, so you're basically looking at the difference between dark blue and black, which isn't much.

A camera, by contrast, perceives color roughly the same regardless of light level, so you should be able to see the purple lanyards when screening the photos even if you can't see them with your eyes, assuming there's enough contrast. However, even there, you may see differences in sensitivity between the color channels, particularly if the camera has a built-in UV filter, which may reduce sensitivity in the blue end of the spectrum.

To answer your question, though, you should pick colors that are highly visible and distinct at night. This could include stripes, glow-in-the-dark material, phosphorescent material that will emit light in the presence of black light, etc.

I would probably go with white, black, and a light to medium green. In terms of visual sensitivity, your eyes see green to greenish blue objects most easily. This is true without regard to color blindness, as the rods that pick up light at night are not responsible for color vision. And choose the order of the lanyard colors carefully, too. Make black be "don't care", white be "don't photograph", and green be "ask". That way, the ones that are least likely to be seen are least likely to matter.

Another problem, of course, is that your black dye could very well be really dark purple, but that's another issue for another day. :-)

A human based color model is Lab, which have a Red-Green component and a blue-yellow component, besides a lightness one.

There are several types of color blindness, most common is a red-green deficiency but also there are some cases of blue-yellow one.

In my opinion the safest bet would be a

You can also try some color blind simulators online. https://www.google.com/search?q=color+blind+simulator

Not the answer you're looking for? Browse other questions tagged contrast color-blindness or ask your own question.

8
Why are sensors less sensitive to blue light?

2
Why do all my landscape photos turn out so milky, almost foggy, and lack both contrast and color?
2
How to handle the tone curve (linear/medium/high contrast) and the other development settings?
14
Is there any proof that high saturation and contrast makes a picture more appealing in social media?
18
How does Renato D'Agostin achieve these super minimalist and high-contrast photos?