Same manufacturer, two lenses of similar focal length, but one is much faster...does the sweet spot produce the same resolution?

This has practical implications as I want to use a 300mm tele for shooting landscapes, where lens speed is not so critical but maximum resolution (and light weight) is. Would I drop twenty times the coin and haul twice the weight for similar resolution if I bought the faster lens?

It all depends on each individual lens.

The sweet spot of a lens is dependent upon the individual design and execution of the lens.

It all depends on the specific lenses in question.

It all depends on the specific design of the lens.

The sweet spot of one lens could also be worse than the worst aperture setting of another lens. If one lens costs twenty times the other it quite possibly might be better at every aperture than the cheaper lens is at any aperture.

Rather than comparing what aperture is the sweet spot of each lens, you should probably consider how each lens performs compared to the other lens at the aperture you plan to use it the most.

It all depends on the two individual lenses.

Now that the specific lenses have been revealed we can look at the question in more detail. They are all very good, but there are measurable differences.

The results below are when tested by DxO Labs mounted on the Canon EOS 1D X at each "full stop" aperture setting. The actual "sweet spot" of each lens may be at an intermediate 1/3 stop setting, but it won't be very much different than the nearest whole stop.

The EF 300mm f/2.8 L IS II is sharpest at f/4. It is only very slightly less sharp wide open at f/2.8 and at f/5.6. It maintains the level of resolution fairly consistently all the way from the center to the edges at all apertures until diffraction begins to set in around f/8

At f/8 all three lenses are very close in resolution at the center but the EF 300mm f/2.8 L IS II is measurably sharper at the edges of the frame.

At f/5.6 the differences are more pronounced: The two f/2.8 versions are equally sharp in the center of the frame, the two older lenses are about the same on the far edges of the frame. The EF 300mm f/2.8 L IS is somewhere between the other two from about 35% of the frame until just before the edge of a full frame sensor.

Here are the resolution profiles of the three lenses when measured by DxO on the Canon EOS 5Ds R with each lens set at its sharpest aperture: 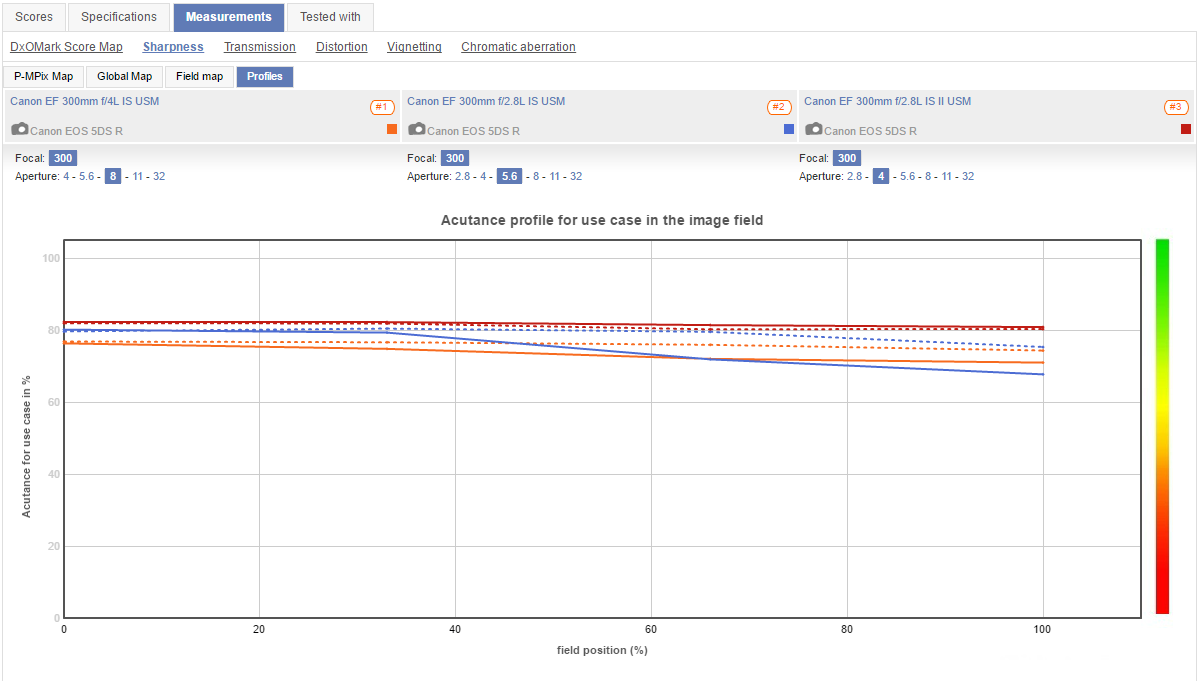 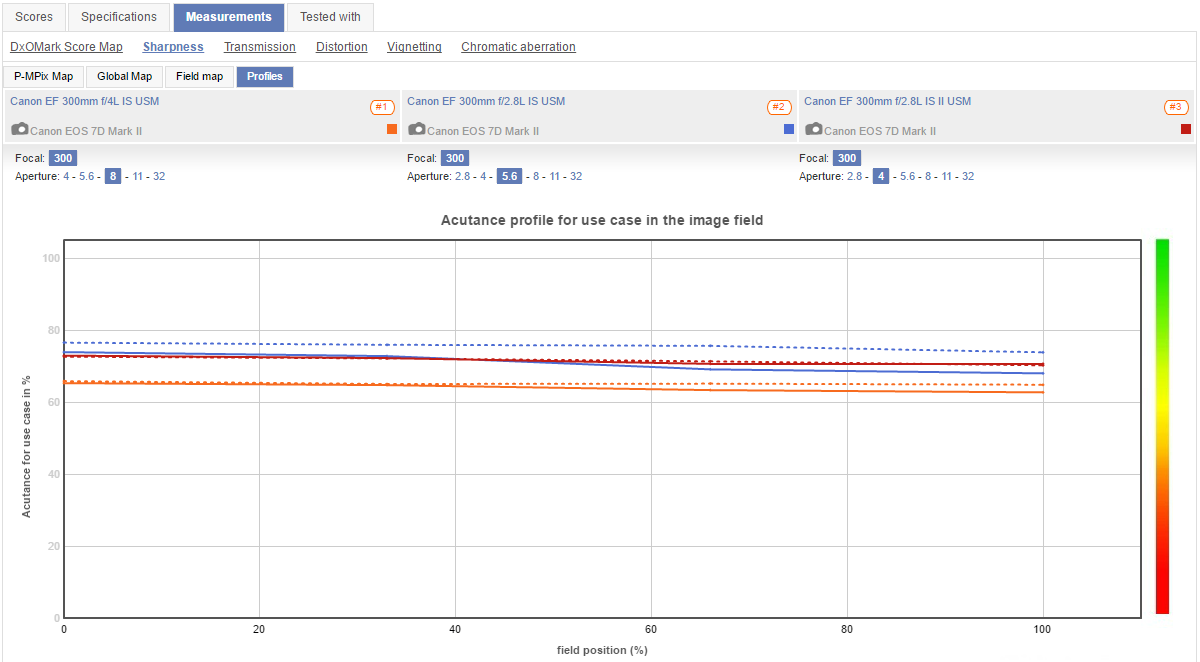 Comparative results for the three lenses on older, lower resolution APS-C bodies are similar. As the resolution of the camera used to test them is lowered the scores for each lens drop but their relative performance remains fairly constant.

Please Note - There are older, non-IS versions of the EF 300mm f/4 L and EF 300mm f/2.8 L. These are older lenses with different optical formulae than their newer IS counterparts. The older, non-IS lenses have not been tested by DxO Labs. Testing sites who have tested the older and newer versions show measurable improvement with the newer IS versions over their older counterparts.

No. First, there is no one answer, it depends on the actual lens.

Generally though, optimum sharpness is achieved around 2 stops down from wide-open. Some high end lenses only need one stop, some lower quality ones could be three but it usually about that much.

This means that the maximum aperture really makes a difference as to where maximum sharpness occurs. If you have an F/2 lens, expect F/4 or F/5.6. If you get an F/5.6 lens, then it will be F/8 or even F/11. This also limits slow lenses because diffraction sets at pretty much the same aperture, so an F/5.6 lens which gets sharp at F/11 may only be good until F/13 - depending on pixel size - but that is less than a stop of leeway.

Not the answer you're looking for? Browse other questions tagged lens resolution or ask your own question.

2
How do I get the best sharpness from a Zeiss Jena Pancolar MC lens?