In darktable, how can I get a particular basecurve preset to be applied automatically?

I'm using darktable (which I love!) for processing raw photos from a Canon EOS 6D on Ubuntu 16.04. It seems that when I open a raw image in the darkroom and go to the basecurve module which has been automatically applied, it's using a preset called "canon eos like". However, there's another option in the menu called "Canon EOS 6D" which produces better results. How can I get the "Canon EOS 6D" basecurve to be applied automatically instead?

These basecurve presets can be found in the Presets table of the settings you get to by clicking on the gear icon: 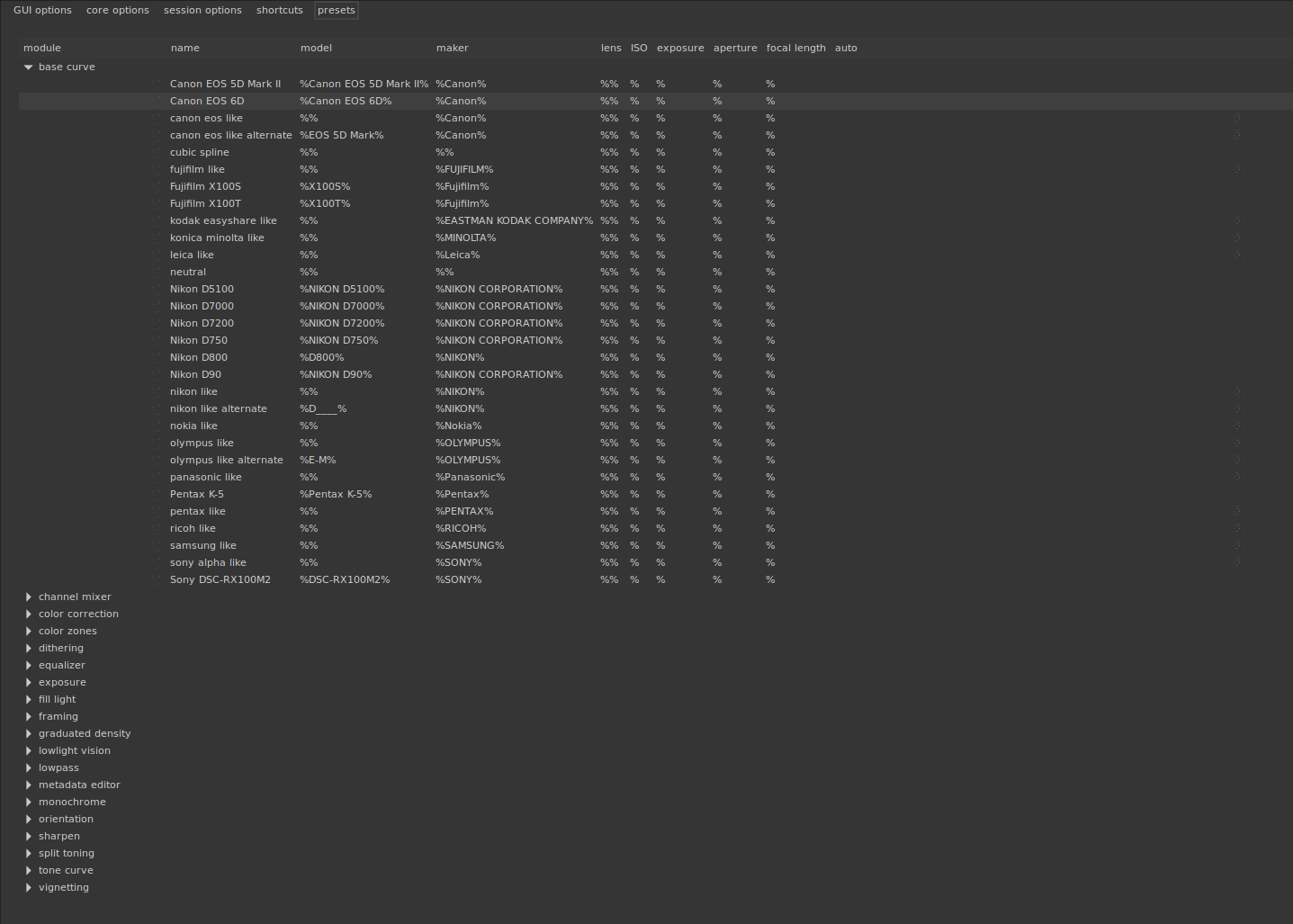 ... but I can't see how to indicate that the preset with name "Canon EOS 6D" should be used in preference to "canon eos like". Perhaps the model field, which looks like an SQL LIKE pattern, doesn't actually match the model that's being extracted from the raw file? That doesn't look like it should be the case, though:

In the current version of darktable (2.2.1) you can open settings > "core options" and select "auto-apply per camera basecurve presets". In previous versions, you can just create a preset using that curve and set it to auto-apply. The built-in presets are read-only, so you can't change the auto-apply status of those in the settings.

If that doesn't work then the module is obviously being too clever, and you might have to try more complicated approaches involving editing the database of presets.

Not the answer you're looking for? Browse other questions tagged software darktable or ask your own question.

9
How to change which modules are auto-applied in Darktable?
7
Darktable - save/export module presets?

3
How can I get white balance support for Canon EOS 1100D in UFRaw?
9
How to change which modules are auto-applied in Darktable?
3
Is there a way to delete grouped images in Darktable
4
Why are blown-out highights pink instead of white in Darktable?
8
Lens correction in darktable when my lens isn't known?
4
Where does this noise come from and how to get rid of it
1
Where do I turn to learn how to process images effectively?
1
Why are thumbnails bad, when jpgs are good, with raw processed with darktable?
1
How do I batch apply sidecar files to the corresponding photos by filename in darktable?
2
Why don't the values given by Argyll's scanin match what I see in darktable or Gimp