What does Exposure bias in EXIF means? Fujifilm xt1 tag(0x9650)

I was reading this article that talks about Fujifilm ISO being tested against others cameras.

At the end of the article talks about that Fujifilm applies some EV on the output RAW files (.RAF File)

Then I was trying to understand this since I am an amateur photographer And I end up in this forum: https://www.dpreview.com/forums/thread/3811975 which results being the same person. There is an explanation about this:

If the camera specifies that there should be a brightness compensation applied to an image, does it mean that the metering is somehow off

It only means that the compensation is to be applied to comply with some standard. In practice it is the compensation between the exposure meter calibration point for the given ISO setting and the SOS (Standard Output Sensitivity) ISO recommendation (Fujifilm are using SOS in their current cameras).

Also, what does a value of -0.72 mean? Should the brightness be reduced or increased by 0.72 stops?

Finally, is the raw exposure bias indicating that ISO 800 isn't really ISO 800 but a different value (when comparing ISOs between different camera makers), which gets at the nation that Fuji tends to overstate its ISO numbers, compared to some other mainstream camera makers?

This tag indicates that normal ISO overstating is slightly more than 2/3 of a stop, and more for high ISO. That is done in order to protect highlights and allow film simulations to work.

Now, If I am not that bad. What they are talking about is that fujifilm RAW file has a different Exposure which is -0.72 of the actual Exposure at the moment the photo was taken. So, that why in the first post the result was darker than the other camera. (underexposure) Now, I was really working on this to see if my photos are really underexposed. As the post says, the EXIF data shows the value of 0.72 for ISO 200 (and also as the table being posted) So I was trying to get this info in LightRoom from a recent photo taken. For my curiosity, I found out that the "Exposure bias" is "0 EV". So it means that this issue about underexposure is not happening? Also, I was reading about this in others pages and a remember someone talked about this underexposure processing can not be turned off or on.

Also, I was taking a look at the firmware updates just in case the firmware was updated in order to change this behavior.

But as far as I can tell there is no update that indicates a change on that. My camera has a 4.31 firmware version.

Does anyone know if this underexposure thing is active on XT1? In resume, in this case for me seems that the photo is not being processed for the underexposure feature. (by far I can tell that the image output from lightroom developer section is quite similar to the jpeg output since I was shooting raw+jpeg). Also, the Exposure bias is in 0 EV. so does this means no modification to the photo?

Am I correct? Am I wrong in something? Also, Does anyone knows if Lightroom applies the modifications if the Exposure bias has a different value? Also it explains that this 0.72 values is in order to protect highlights and allow film simulations to work. Does this means that my photos does not have this highligths protection and film simulation?

Also, Just for the sake of undestanding i leave the lightroom EXIF data displayed. 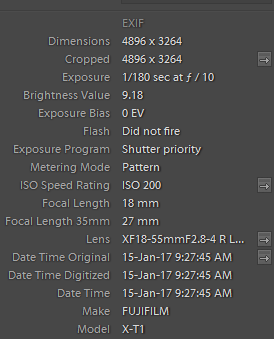 The Exposure Bias listed in the EXIF info has nothing to do with the 0.72EV adjustments referenced in the article(s) you cite. All of that is stuff that goes on "under the hood" inside your camera and your raw processing engine (whether in the camera or later in a computer).

Rather, the reference in the EXIF information is to what amount, if any, of Exposure Compensation you had set at the time you took the picture.

Since you were in Shutter Priority exposure mode you selected 1/180 second as your shutter speed/exposure time. The camera metered the scene using Pattern Metering and then calculated f/10 as the aperture that would allow the scene to be properly exposed. If the scene was a typical one your photo should have been properly exposed.

Not the answer you're looking for? Browse other questions tagged lightroom exposure metadata fujifilm or ask your own question.

3
Why does the exposure vary in these Nikon flash photos?
2
If I need the higher ISO anyway, is there any downside in using Fujifilm's extended DR mode?
1
Does the Fujifilm X-Pro 1 show the effects of exposure compensation in the EVF?
7
Pentax P-TTL: Why and when does underexposure occur and what can I do?
2
What do these strange fractions in EXIF exposure values mean?
5
Why does exposure vary subtly between P, A and S modes, when the flash is on?
2
How to filter photos in Lightroom 6 by EffectiveMaxAperture EXIF tag?
2
Why are images from FujiFilm X-T20 darker than those from Canon 400D?
3
How can I get consistent exposure while allowing aperture changes on Fujifilm X-T2?
3
Are Fujifilm simulations different depending on the source (eg in-camera raw, Lightroom or direct jpeg)?